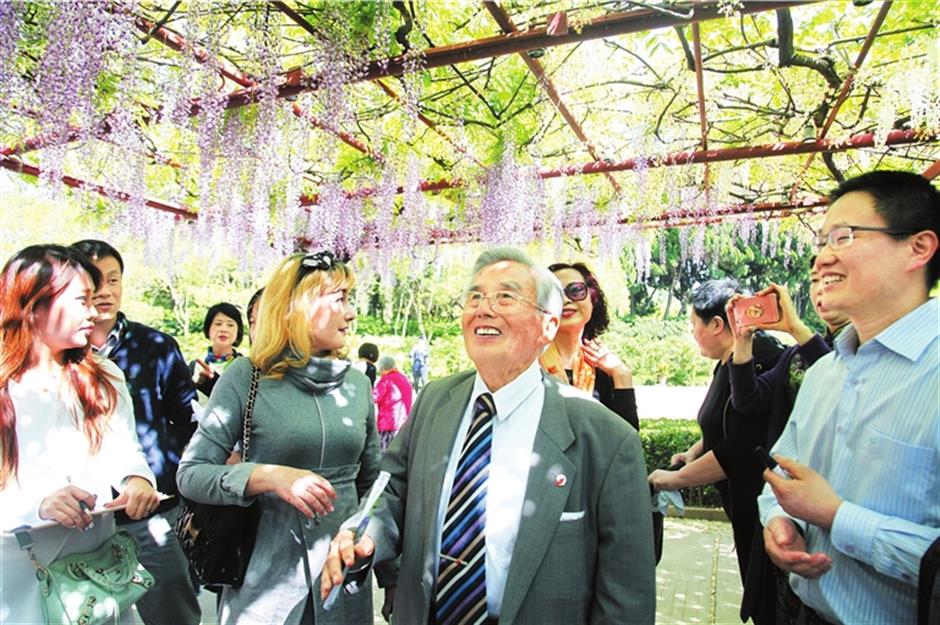 A file photos shows Fujimoto Michio (center), the founder of Jiading’s Wisteria Park, at the park in 2016.

In early spring when the purple wisteria flowers are in full bloom, Jiading Wisteria Park becomes one of the most popular attractions, crowded with visitors from all across the city. Among these visitors, an old man wearing a suit takes a walk in the park and observes the growing status of the flowers.

He treats the wisteria flowers like his own children because they are a gift from his hometown of Wake in Japan’s Okayama Prefecture.

Fujimoto Michio is familiar to Jiadingers because he is the wisteria park’s founder. The 86-year-old has devoted himself to promoting friendly relations between China and Japan over the past 30 years and he was awarded Shanghai’s Magnolia Gold Award for his outstanding endeavors in 1996.

Fujimoto has deep Chinese connections. His parents took his first name from “The Analects of Confucius,” a collection of the Chinese educator’s thoughts, and he studied ancient Chinese history at university.

When China established diplomatic relations with Japan in 1972, Fujimoto, then Wake’s director, felt it was an epoch-making transformation and he hoped to develop a long-term communication with a district or district-level city in China. After visiting several places, Wake decided on Jiading.

“In the past, a senior officer from Wake called Wake Kiyomaro (AD 733-99) encouraged the movement of ‘sending envoy to Tang Dynasty for studying’,” Fujimoto said. “I wanted to do the same thing as him, sending student groups to Jiading for friendly intercommunication.”

In China, Japanese students experienced foreign campus life by auditing classes, participating in club activities and holding friendship competitions. Through these activities, schools and governments in both areas got valuable educational information during the exchange program.

The exchange programs continued after Fujimoto retired 16 years ago and, so far, Wake has sent 25 students groups to Jiading. Apart from student groups, Fujimoto also helped cultivate Jiading’s agricultural talent for free in Japan so that the technicians in Jiading could access the most advanced agricultural technology.

In 1996, Fujimoto proposed to build a wisteria park in Jiading.

“The wisteria can live for a long time, around 500 years to 1,000 years. As the land of fish and rice with abundant of rain and sunshine, Jiading is a perfect place to grow wisteria flowers,” he said.

His advice also reflected his wish that the friendship between China and Japan could last as long as possible, just like the wisteria flowers.

His idea was supported by Jiading government and the location was determined quickly. Fujimoto convinced an entrepreneur in his hometown to invest 2 million yen (US$18,180) to build an arbor for wisteria growing. Meanwhile, he picked the best and the brightest wisteria species from Wake’s Wisteria Park and then grafted them to the wild wisteria.

“The park was opened to the public in 2000. That was a mild day and the park was filled with visitors. The wisteria trees looked terrific,” Fujimoto recalled. “I told myself to cultivate Jiading’s wisteria like the cherry blossom in Washington and tried to make it a famous tourist site throughout the world.”

Fujimoto never stopped building bridges between Wake and Jiading. Every year, he comes to Jiading to teach the workers how to clip and care for the flowers.

“Unlike cherries, wisteria flowers are difficult to maintain so I continue to come to Jiading even after I retired,” he said.

“We speak different languages,” Fujimoto said, “but if we write down the words, we can understand the meaning. I wish the two countries with the similar words culture can go hand in hand, creating a better and peaceful environment.”

“Shanghai is my second hometown,” he said. “I have a will that put half of my remains in Wake and the other half in Jiading’s Wisteria Park.”