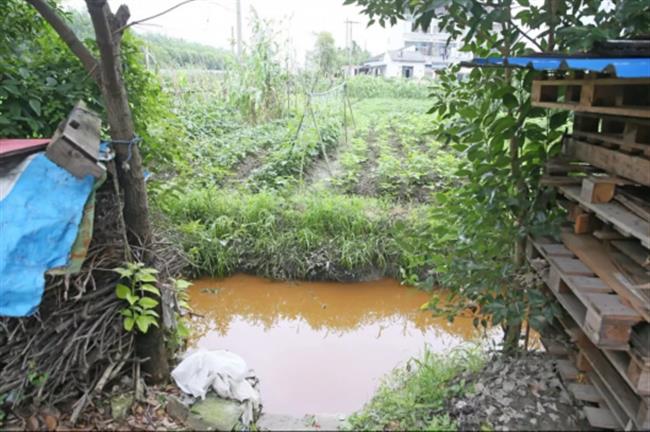 The visibly polluted section of the irrigation channel at Shihudang Town was about 40 meters long.

A foreign-funded materials company in Songjiang District is under police investigation for alleged illegal discharging of pollutants, causing damage to surrounding farmlands.

Songjiang’s environmental protection authority received complaints from residents of Shihudang Town last week that water in an irrigation channel in the town’s Jinsheng Village had turned yellow and was emitting a noxious oily smell.

An investigation on July 6 showed that the color and smell were caused by pollutants, mainly waste lubricant, traced to the nearby Sibelco (Shanghai) Mining Company. The visibly polluted section of the channel was about 40 meters long.

According to the company, it hired a demolition firm to destroy some of its equipment, and during the demolition process waste lubricant leaked into its rain water pipe and then entered the channel.

According to Songjiang Environmental Protection Bureau, the case has been handed over to local police for further investigation. As of yesterday, the matter was still under investigation.

According to the bureau, lubricants and polluted waters had been pumped out of the channel by Sunday. Contaminated mud and plants in the channel bed were also removed. Experts will conduct further tests to make sure the water is safe for agricultural use.

This is Songjiang’s first environment pollution case since the city government sent inspection teams to three districts — Huangpu, Minhang and Songjiang — on July 5 to supervise environmental-management at the district government-level.

The Songjiang District Environmental Protection Bureau has reported and dealt with nine environment cases since July 5.