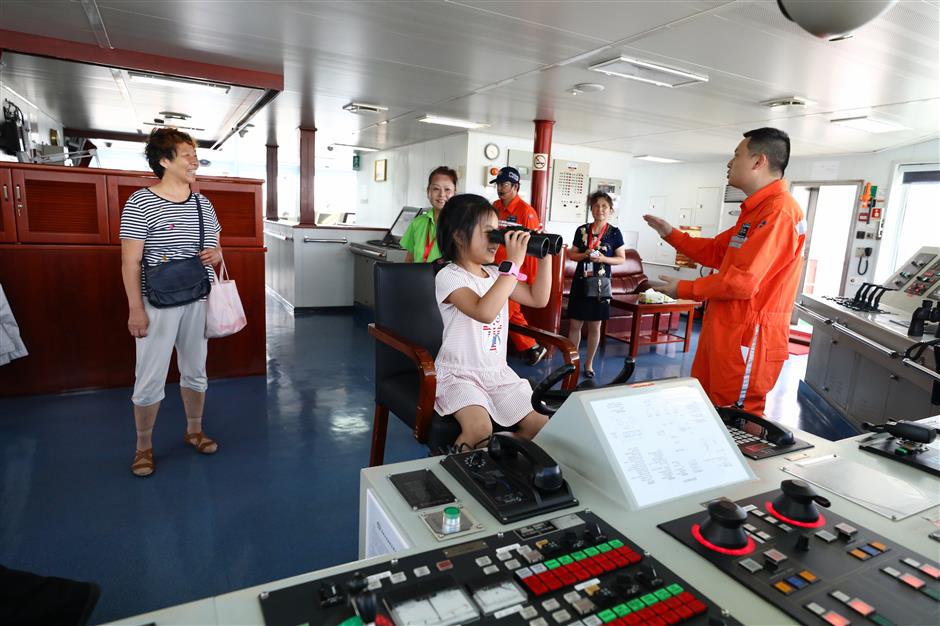 A girl looks through a binocular from the command bridge of the rescue vessel Donghaijiu 101 in Shanghai yesterday. Donghaijiu 101 was among the four ships which were docked at Shanghai Port International Cruise Terminal in Hongkou District and opened to the public as part of the activities to mark China’s Maritime Day on Wednesday.

The anchor was dropped for the celebration of China's Maritime Day Wednesday.

Three ships with colourful flags, including a landing ship and two salvaging ships, docked at Shanghai Port International Cruise Terminal in Hongkou District, attracted large crowds, young and old, from all over the city.

One of the salvaging ships, Haixun 01, entered service in 2013 when it was the largest of its kind in China. The ship participated in the search and rescue of Malaysia Airlines flight MH370, as well as the Panama-registered oil tanker Sanchi.

Chen Yanmei, a science teacher who lives in Fengxian District, went to the dock first thing in the morning. Obsessed with ships, she said this was her second time boarding Haixun 01.

“You can never be bored of these ships,” Chen smiled. “Of all the equipment and instrument panels in the driver’s cabin.”

Her dream is to one day set foot on the icebreaker Xuelong to sail to the polar regions with a scientific investigation team. “Although seasickness can be a problem,” Chen said with a chuckle.

The other salvage ship, Donghaijiu 101, also sailed to the Indian Ocean in search of MH370, twice. The ship can carry more than 200 rescued people and can send out a helicopter and submarine to search for and pick up victims at sea.

Li Zhilin, who boarded Donghaijiu 101 with her parents, was fascinated by the instrument panels on the ship as well.

“Through the telescope, I feel like a captain braving the high seas,” the nine-year-old girl said. She couldn’t stop asking questions of the crew members on hand. “I hope the ships in Shanghai can get even bigger, and I hope I can be part of the people contributing to that one day.”

In the maritime post office at 150 Huoshan Road in Hongkou, sea lovers lined up to get commemorative postmarks celebrating maritime day.

“This is the first time that our country has issued a chromatic commemorative postmark,” said grandpa Dong, who has been collecting stamps and postmarks for decades. “They're only available for three days — I can’t afford to miss that.”

The ships docked at the terminal opened to the public until 4pm, so it was a busy day. But volunteer Wang said he was more than pleased to see so many people taking interest.

"It would be great if we can have more public open events on the ships," he suggested. 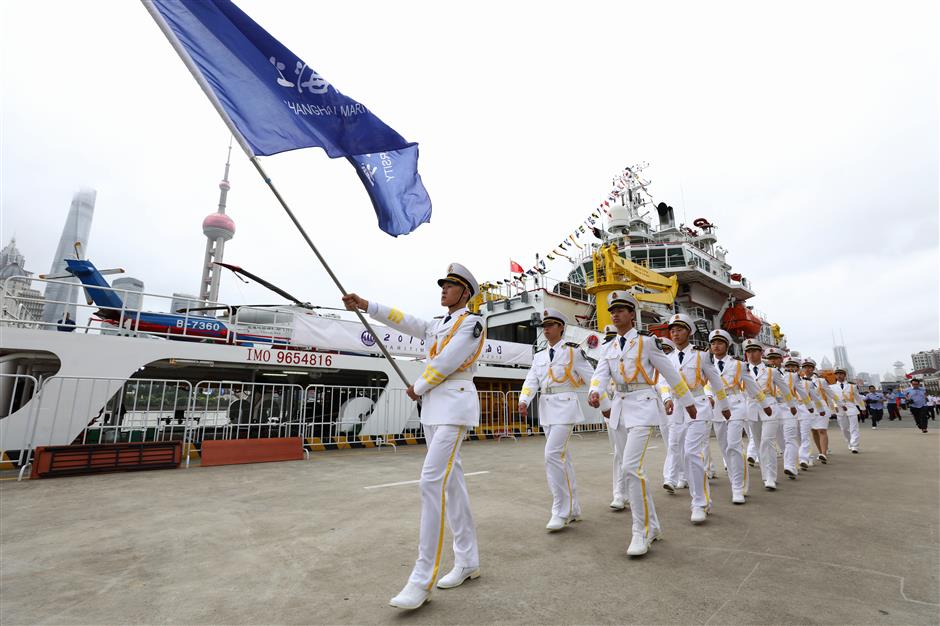 Three ships docked at Shanghai Port International Cruise Terminal in Hongkou District attracted large crowds from all over the city on Wednesday.