Jongdari, the 12th typhoon this year, made landfall in coastal Jinshan District in southwest Shanghai around 10:30am on Friday, packing winds of up to 23 meters per second near its eye, according to the National Meteorological Center.

The typhoon continues to move northwestward but is waning in strength, the center said.

Bringing gales and downpours, Jongdari downed more than 500 trees and caused temporary waterlogging and a power blackout for some 800 households, according to the city's flood control headquarters.

The situation has been handled in a timely manner and the rain has weakened, the headquarters said.

It also said 151,400 people had been relocated, over 145 flights and 119 high-speed train trips canceled, and some beaches closed.

In the neighboring province of Zhejiang, more than 19,820 residents in seven cities were relocated. More than 24,000 ships, including 20,417 fishing boats, have returned to port.

On July 22, Ampil, the 10th typhoon this year, made landfall on the island of Chongming in Shanghai. 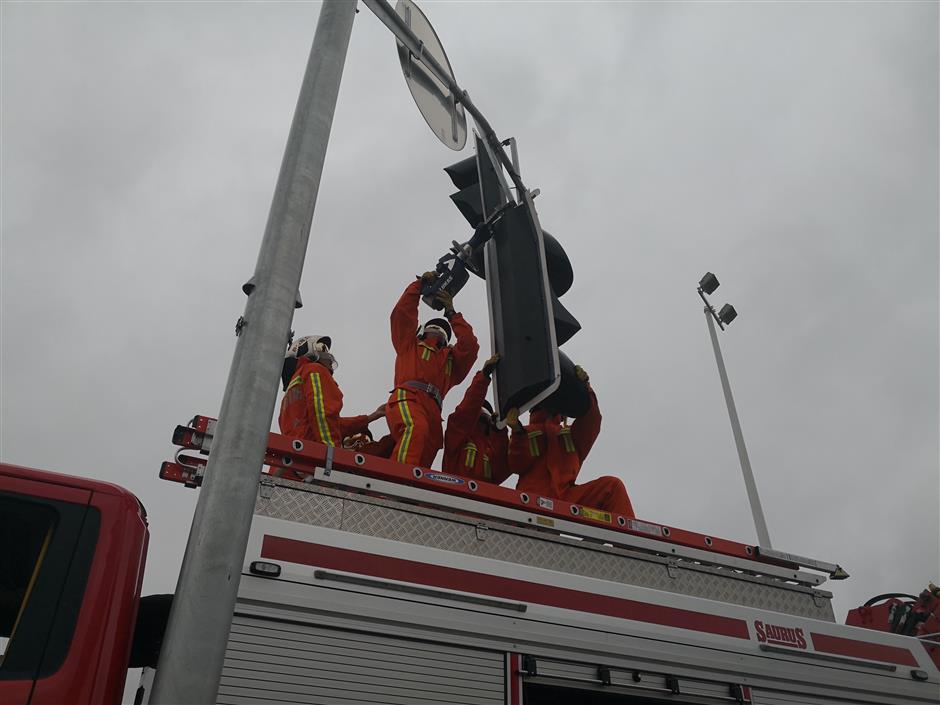 Firefighters remove a traffic light in Jinshan District in Shanghai on August 3, 2018. 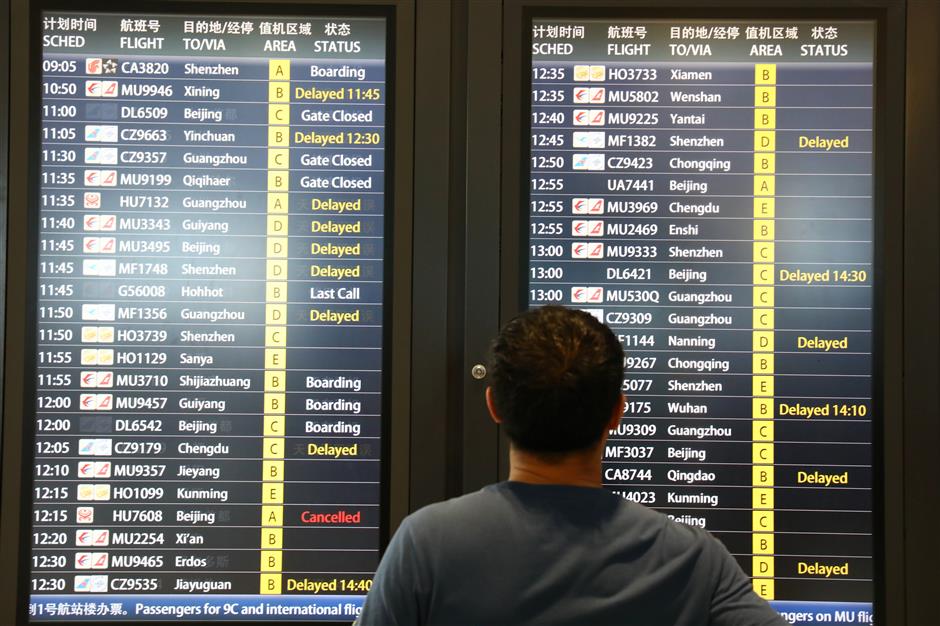 A passenger checks flight information in Hongqiao International Airport in Shanghai on August 3, 2018.

Over 151 flights have been canceled at the Pudong and Hongqiao airports on Friday morning as typhoon Jongdari comes.

Hongqiao International Airport has canceled 89 inbound and outbound flights as of 7am. Only nine flights have taken off and two have landed at the airport due to the impacts of the typhoon.

The Pudong airport has canceled 62 flights in the morning. The airport suffered less impact from the typhoon and the rain has stopped at the airport, the airport authority said. About 50 flights have taken off from the airport along with 80 landing flights.

The air traffic controlled issued the top-level red alert for flight delays for both airports and expected their takeoff and landing capacity would be reduced by 70 percent between 6am and noon.

Both airports were hit by gale winds and rainstorm on Thursday night and Friday morning.

China Eastern Airlines have fixed 30 berthing aircraft to the ground with steel cables at both airports in case of strong winds. Another 49 aircraft were fully fueled to increase the weight to resist the typhoon.

Passengers are given umbrallas after they landed at Shanghai Hongqiao International Airport on August 3, 2018.

Two Spring Airlines staff members remove a ladder on the apron of the Pudong airport on Thursday night as typhoon Jongdari is approaching. 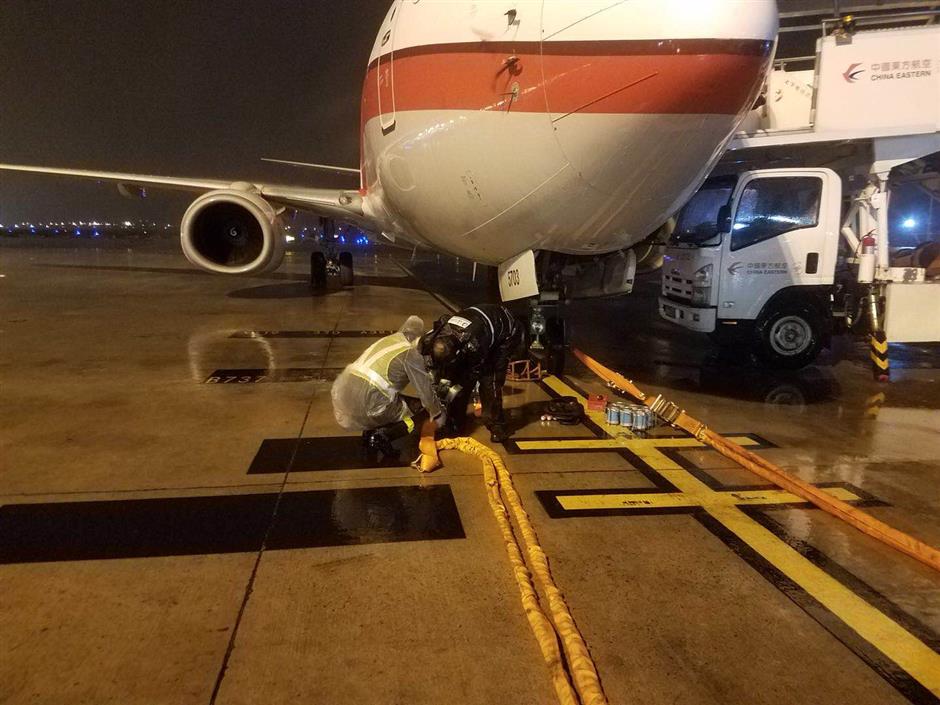 A China Eastern Airlines aircraft is being fixed on the ground on Thursday night in case of strong winds.

Some tourist attractions such as Fengjing Water Town and Zhoupu Flower Sea have also closed.

The Shanghai Sightseeing Bus Center has suspended all tour itineraries on Friday, while the Wusongkou International Cruise Liner Port has also closed due to safety concerns. 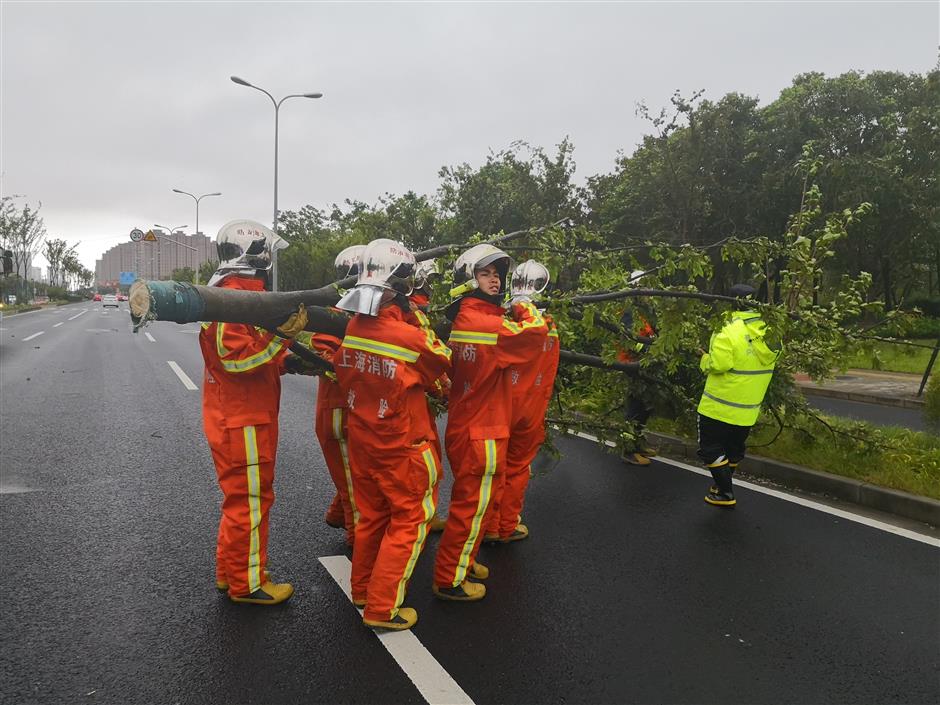 Firefighters remove a snapped tree in Jinshan District on August 3, 2018.