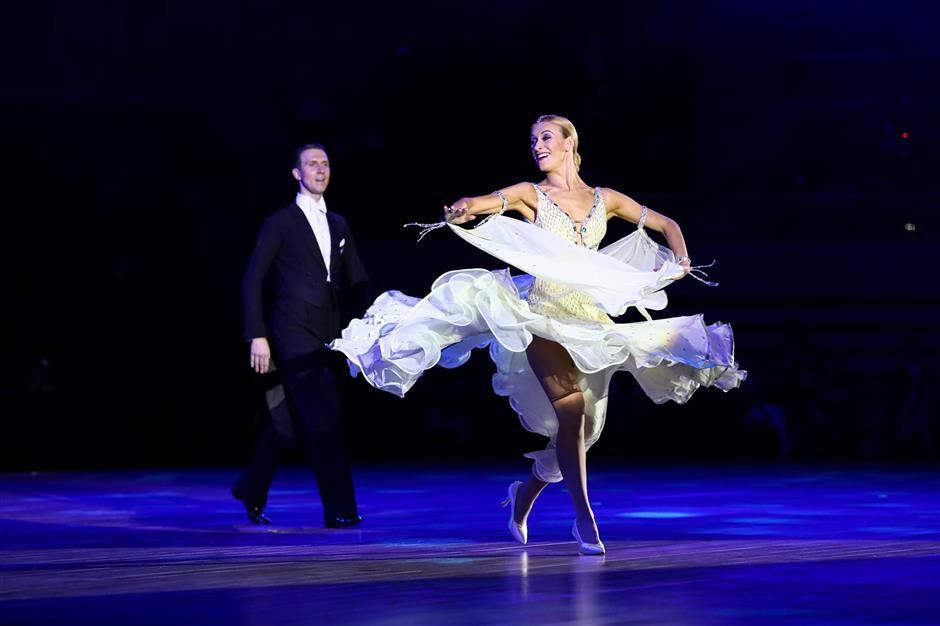 More than 3,000 of the world’s top ballroom dancers are taking part in an international dance competition and festival in northern Baoshan District that will end today.

The British Blackpool Dance Festival, known as the “Ballroom Dance Olympics,” began at the Baoshan Sports Center on August 16. Ballroom dancers from 25 nations and regions competed in a range of Latin and ballroom dancing disciplines at the annual festival.

Dance performances, training sessions, exhibitions, forums and public lectures have been held during this year's festival to promote ballroom dancing among local residents.

Ballroom dancing has been a popular activity in Shanghai for over a century and it is going through something of a renaissance in with this festival in Baoshan.

This is the third time the festival, which began in 1920 in the northern English town of Blackpool, has been held in Shanghai. In 2016, it was held outside of the UK for the first time at the Shanghai Grand Stage, where it attracted over 20,000 dancers and fans.

Ballroom dancing is an increasingly popular activity in Shanghai. Large numbers of enthusiasts can be found at local parks, public squares and communities, said Li Weiting, vice chairman of the Shanghai Sports Federation.

"The festival offers the best opportunity for local amateur dancers to communicate with the world’s top masters,” Li said.

As a new highlight of the festival this year, over 20 of the world’s top ballroom dancers gave talks and taught basic skills. These include former prize-winning Blackpool winners and senior dancing masters such as Troels Bager and Ina Jeliazkaova, Nino Langella and Andra, Arunas Bizokas and Katusha Demidova as well as Alexander Zhiratkov and Irina Novozhilova.

A conference was held to coincide with the festival, gathering domestic dancing experts, training organizations and agents. They looked at the development and business opportunities of ballroom dancing.

And an exhibition was held at the sports center, which included photos of previous Blackpool festivals.

At the end of the 14th century, European royal courts refined and standardized folk dances and developed them into court dances for entertainment and social activities.

With the industrialization of the West and the rise of the working class,these dance styles evolved into the ballroom dancing of today — the waltz, tango, foxtrot, quickstep and so on — which eventually spread across the world.

Over the past two decades, ballroom dancing has been a fast-growing business in China in the wake of the government’s drive for citizens to lead a healthier and more active lifestyle.

To cater to this growing demand, organizers also arranged for top dancers to offer a series of performances on the sidelines of the fierce competitions.

Baoshan, which has long been known for its heavy industries, is striving to improve its cultural scene. It aims to build more sports venues and facilities to turn the former industrial center into a "sports town".

The northern district aims to initially develop Baoshan into Shanghai's major training center for basketball and ballroom dancing, according to the Baoshan Sports Bureau. The district has cultivated many world-famous athletes, such as Xu Xin, the world No. 3 table tennis player, and Wu Jiaxin, the archer who reached the semi-finals at the 2016 Rio Olympics

The district plans a “basketball city” as a priority in its 13th five-year plan for the sports industry. The district government aims to create a unique basketball culture and organize a number of key grassroots basketball games among citizens throughout the year.

Professional-level basketball courts and sports parks will be built across Baoshan, including in its agricultural towns such as Luojing. The aim is to enable residents be able to reach a sports site within a 15-minute walk.

Currently, the district has a total of some 80,000 square meters of sports facilities. It hosts 1,200 sports events and competitions every year, with more than 900,000 Baoshan residents — or nearly half its population — taking part, according to the bureau.

Various public competitions are held, including a monthly "street basketball competition" on the first Saturday of every month at the Baoshan Sports Venue, a venue built to National Basketball Association standards.

The district hosted the summer league of the 2018 China Basketball Association in early August. Two Super Basketball League teams from Taiwan and six CBA teams from the mainland competed during the five-day competition, which is also the Cross Strait Yangtze River Delta Professional Basketball Club Challenge.

The government has also injected a large financial investment for cultural projects into thedistrict. Apart from the sports center,Baoshan will build China’s largest screen cinema at a former container dock on the bank of the Yangtze River.

The ball-shape Changtan Huge-screen Cinema with a diameter of about 35 meters will be the third largest in the world, after the LG IMAX Theatre in Sydney and Singapore's  IMAX cinema upon its completion in 2019. Its screen will be 22.4 meters wide and 12 meters tall.