Ma Boqin, 84, is a gardener who doesn’t need water. For almost a quarter-century, he has made a hobby of miniascapes, or dish gardens with dry or other plant materials that don’t require water.

He has exhibited his works around Shanghai.

“Money isn’t my biggest concern,” said Ma. “The happiness my hobby brings me is more important.” 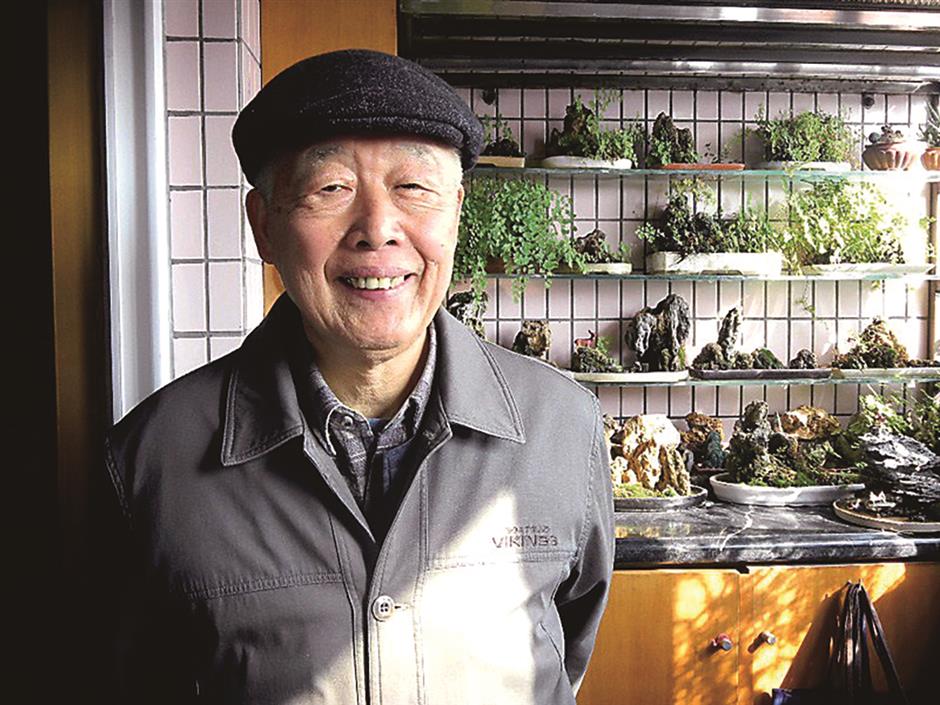 Ma Boqin and his bonsai.

The Minhang resident first discovered this form of bonsai when he retired at age 60. He immediately fell in love with the art form and joined the Shanghai Miniascape Association.

The genre traces its roots in China back about 1,000 years ago. It is said to have been initially inspired by the beauty of short, twisted trees rooted on cliffsides. Later, the concept went on to form the basis of Japanese bonsai.

“It’s a miniature of natural scenery in a pot,” Ma said of bonsai, “but as the art form evolved, it focused only on plants, losing its artistic essence.”

Ma turned his hand to traditional bonsai but found he wasn’t particularly good at it.

“In a hot summer like this one, you need to water bonsai twice a day,” he said. “I felt tied to the plants. I couldn’t leave home for long. It’s a hobby for people who have time.”

So Ma gave up traditional bonsai and turned to a more modern version. He uses tree trunks, rocks and other materials of nature to re-create scenery or scenes from traditional paintings and poems.

Traditional bonsai done for exhibitions, he said, often involves pruning just a few days before an event. After the show, the plants are left to die in their pots. At best, a bonsai can survive for no more than 100 years, he said.

“My works can be kept forever,” he explained.

Ma has re-created scenes from 300 Tang Dynasty (AD618-907) poems based on how the verse stirred his imagination. His miniascape works can be divided into more than 11 categories by themes and styles. Not all are traditional.

“I created miniascapes about line dancing,” he said. “And when the country called for people to join the army, I created a scene from ‘Mulan Joins the Army.’” 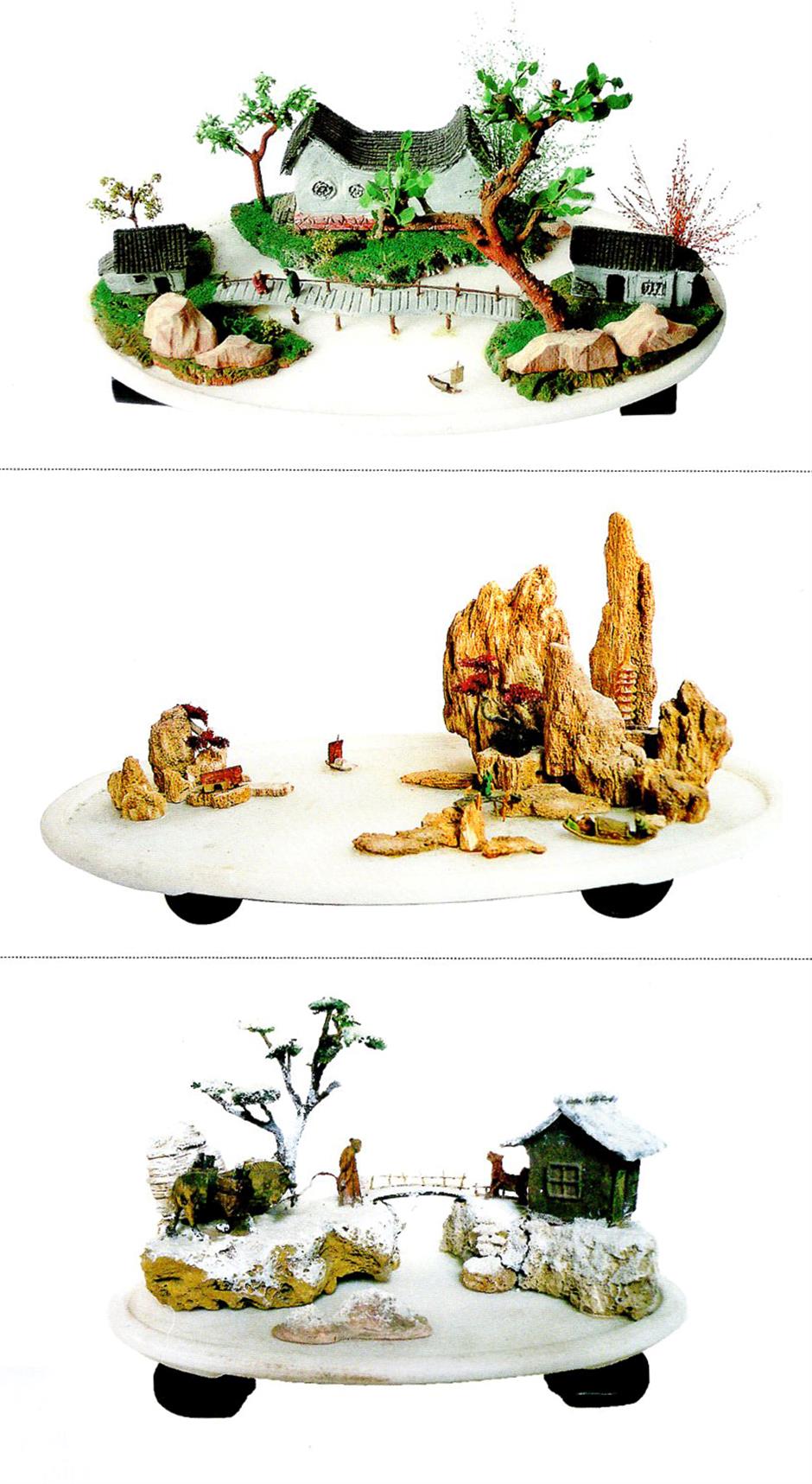 Though his works are tiny, they are vivid. In order to include figurines like farm animals and humans in his works, he had friends bring him mini-resin figures as small as 1 centimeter from Germany.

He has held three solo exhibitions of his work, including one in Guyi Park in Jiading District. But as he ages, he admits that it is becoming too difficult for him to carry his artworks around the city to display them.

After renting a showroom on Qibao Old Street for a time, he decided to buy a house in Fengjing Old Town in Jinshan District to display his works free for public viewing.

“It’s a tourist destination, so visitors come from all over the country,” said Ma.

His daughter and son-in-law drive him to the town every Saturday, where he spends an entire day serving as curator.

“When you look at these miniature landscapes, you feel a sense of overwhelming pleasure,” said Hu Wenyao, a visitor viewing Ma’s works. “It is so enjoyable to see something from the larger world reduced to a small, delicate piece of art.” 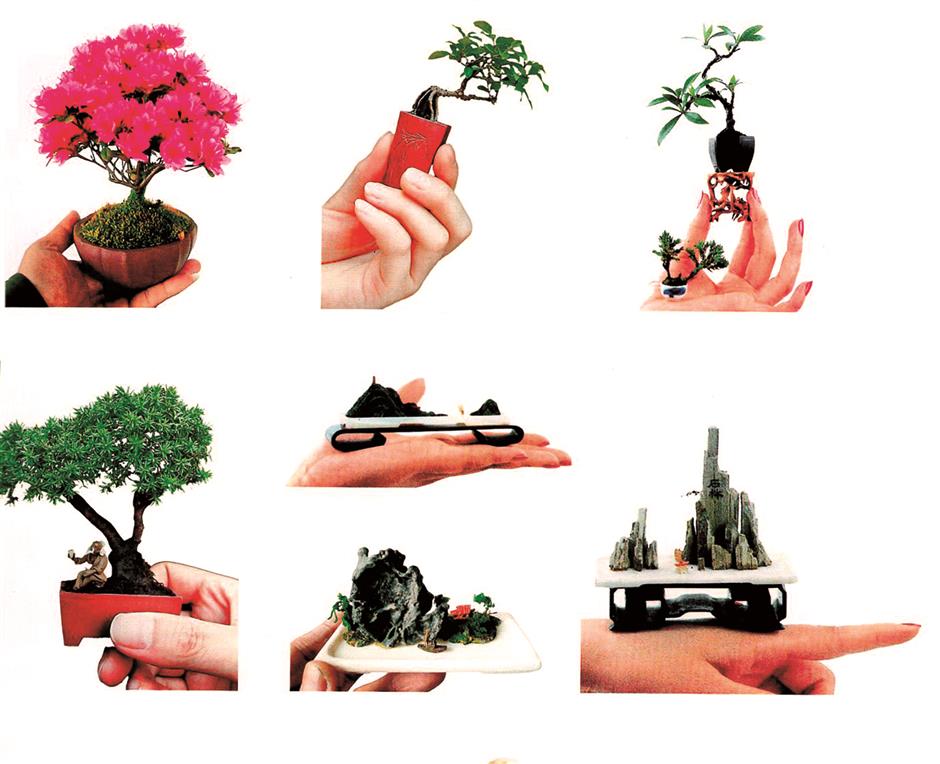 Ma said many visitors ask if they could take lessons from him and learn the art.

“I ask them, ‘Are you patient? Do you really like the art? Are you willing to spend time and money on it?’” he said.

It takes about a week for Ma to finish one piece. His eyesight is diminishing. None of his three daughters is interested in miniascapes.

“My biggest wish is to find a successor to pass on my skills,” he said. “But it’s important for learners to have some basic skill in art. For example, they need to understand scale and ratios.”