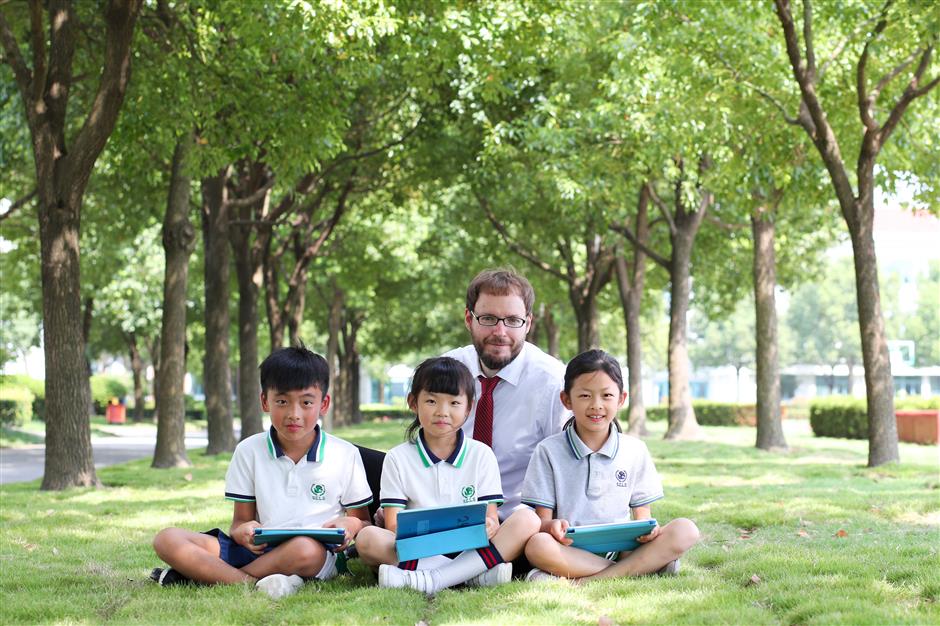 Mark David Ecklesdafer, who grew up in Rockford, Michigan, a small town north of Grand Rapids in America, has worked in Shanghai for more than 10 years. The dedication of this 35-year-old science teacher at Soong Ching Ling School (SCLS) not only helped him rise to the position of vice principal of the international division of primary school of SCLS, but also won him a Magnolia Silver Award this year.

Ecklesdafer’s bond with Shanghai began in 2004 when he was studying philosophy at Grand Valley State University in Michigan. When he heard about a six-week study trip to China, traveling around the country while learning about its culture, language and philosophy. He was soon on a flight from Michigan to Shanghai.

“I still remember the night we arrived, taking a bus through the city to our hotel from the airport, just staring out the window in fascination at the endless buildings and lights,” he said. “I had never seen anything so amazing before. After that trip I knew I would eventually come back to China.”

Ecklesdafer said there are many differences between his hometown and Shanghai.

“One of the most noticeable differences was the sheer number of people. The city I grew up near has a population of just over 200,000 which is one of the biggest cities in Michigan,” he said. “With so many people here, the idea of‚ ‘personal space’ is very different and took some time getting used to. There are also so many different types of people here. Shanghai is a very international place.

“The food is another big difference for me. I love Chinese food and really had no idea what it was really like until I came here. I’m a huge fan of dumplings, tofu and fried rice. I enjoy trying the assorted styles of cooking found in China. Currently my favorite style is dong bei food, or northeastern Chinese cuisine.”

After Ecklesdafer returned to America, he applied for an exchange program and was back in Shanghai in 2005 to study Chinese language and culture at East China Normal University for 18 months.

He went back to America to graduate but was soon back in Shanghai. In September 2009 he joined SCLS which was in its second year and was developing its curricula.

Though his major was philosophy, he chose science education as his career.

“Actually I wanted to be an astronaut when I was a kid,” he said. “I loved science, I loved math. But when I went to the university, I didn’t know what I wanted to do. There were so many things I loved to do. So I picked philosophy, but I never stopped loving science and math.” 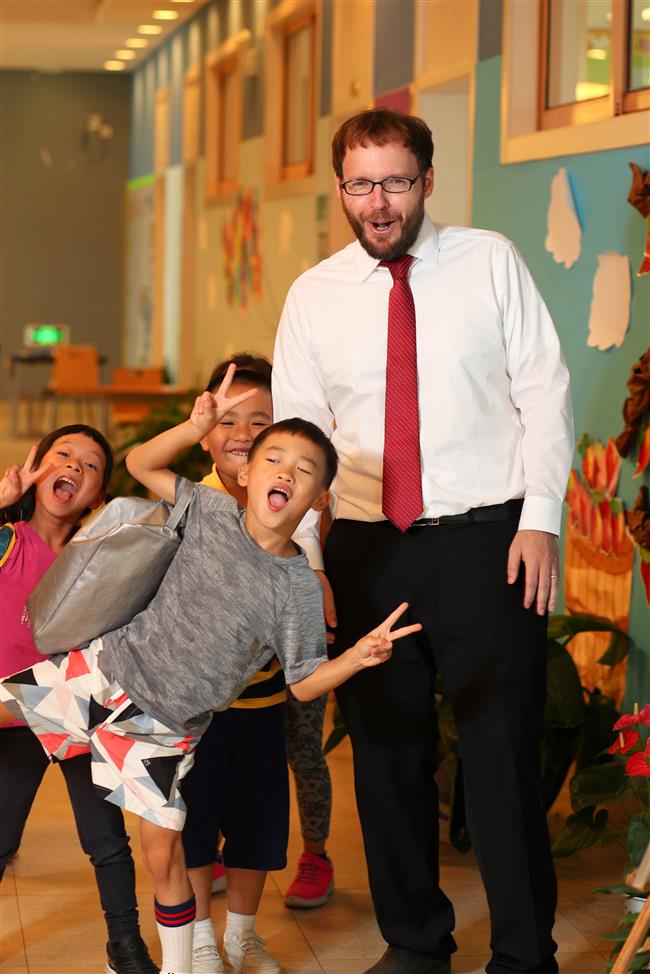 He takes a very energetic approach to teaching, getting students actively engaged in the class. He insists on a “5E” approach — engagement, exploration, explanation, elaboration and evaluation.

It’s important that children not just read books, he says, but be able to see and experience things.

When he does experiments with gravity, for example, he grasps objects and drops them at the same time to see which falls faster.

He stands on his desk and has students give him something they have, such as their water bottles or books, so they can be directly involved.

He encourages students to ask questions and takes their questions seriously, he encourages them to put forward hypotheses, work out research approaches and do scientific experiments.

He is also dedicated in helping students engage in charity.

“We want to teach students that the world is a wonderful place but there are also people in need,” he said. “So if we have the ability to share, if we are better off than other people, then I believe it’s our responsibility to help those in need.”

One charity event co-organized by Ecklesdafer was a program called “Buddy the Buddy,” in which 192 students and 36 teachers raised money by doing chores at home which was used to buy 228 solar-powered lights for a school in Uganda. 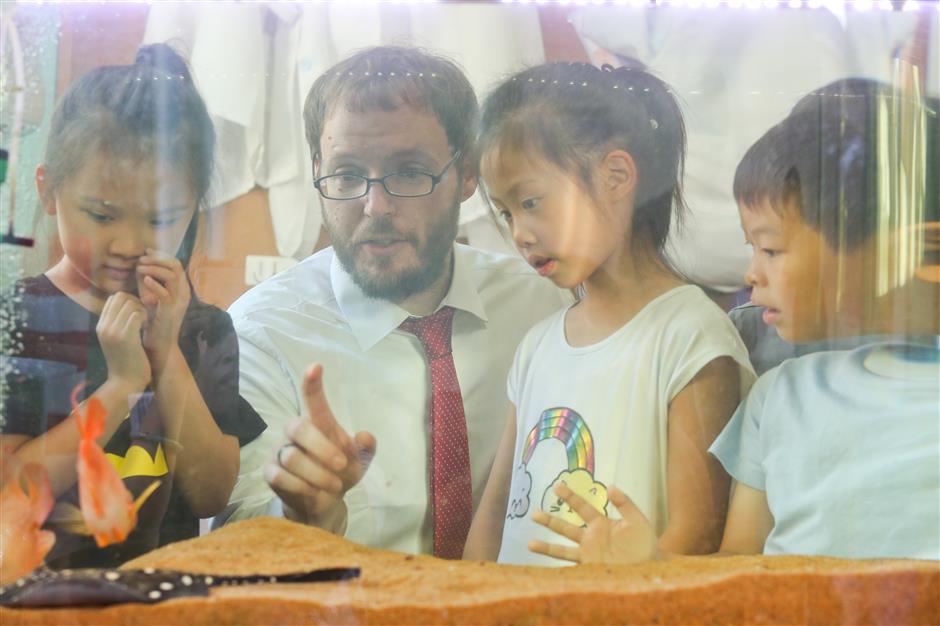 Students at the Katwe Martyrs School in Kampala, where studying had been difficult due to a lack of electricity, wrote letters of thanks.

SCLS follows the motto of late honorary president of China Soong Ching Ling — to give the children the most valuable things. Ecklesdafer feels the most important thing he can give students at the school is the desire to learn.

“When students are eager and willing to learn, when they enjoy lessons and activities, they won’t stop learning just because the bell rings at the end of the day. They will go home and continue exploring and finding questions they want answers to,” he says. “I know I’ve done my job well when students come to me on Monday and want to tell me about new things they learned over the weekend, or want to share facts they read in a book. I want this passion for learning to stay with them their whole lives. Giving the most valuable things also means teaching students how to be global thinkers, be positive members in the community and give them the tools for independent learning.”

He also believes Soong Ching Ling’s motto gives a mandate for teachers to do what is best, not just for the class as a whole, but for each individual student.

“It means we need to be actively aware of the needs and abilities of each student,” he said. “We are then able to scaffold different learning activities based on these specific needs. And by allowing differentiated outcomes and project-based assessments, students are able to thrive and grow within their ability level.”

Ecklesdafer loves Chinese culture and has read many classics, such as “The Three Kingdoms” and “Heroes of the Water Marshes.” He has also cooperated with Chinese teachers to rewrite dramas based on those classics and have students perform them.

Ecklesdafer and his Chinese wife have a 6-year-old son, Luke, who was enrolled in the Soong Ching Ling School last month.

“I feel like so many chances to learn here and experience other people’s ideas, we don’t have to agree, but we are able to discuss. It’s a great place to share cultures,” he said. “I also love my life here. It’s so easy and safe to move around the city and it’s such a unique place, so diverse, prosperous and an international city.”

Since 2007, he has been involved in the study abroad project of Grand Valley State University, which had brought him to China, introducing Chinese language and culture to young students.

“I really enjoy meeting new students who travel here from Michigan,” he said. “We always meet the students during the beginning of their trip here. It’s a great experience to relive the wonder and newness they feel about being in Shanghai, and China as a whole, for the first time. I share my experiences here and am asked many questions. I feel like I have a unique perspective because I consider both Michigan and Shanghai my homes.”