The North Bund waterfront in Hongkou District has over the years been revitalized with sports attractions and cultural activities and now has a newly unveiled national scenic spot.

During the on-going Shanghai Cruise and Yacht Tourism Festival, SIPG Cruise City, which was developed from Shang­hai’s earliest cargo docks, was officially listed as a level 4A tourist attraction — 5A is the top level.

The cruise and yacht festival is part of the Hongkou section of the annual Shanghai Tourism Festival.

Another Hongkou part of the city’s an­nual tourism festival is the Sichuan Road N. Happy Festival which was unveiled on Monday. Twenty-five floats from both home and abroad paraded through the commercial street to mark the begin­ning of the annual carnival.

An opening ceremony of the Shang­hai Cruise and Yacht Tourism Festival was held on Wednesday to mark the beginning of the annual cruise and yacht carnival in Hongkou as well as to celebrate the district’s first 4A national attraction.

As a highlight of the celebration, a se­nior official with the Shanghai Tourism Administration granted the nameplate declaring the site a 4A tourist attraction to an official from Cruise City, which is operated by state-owned Shanghai In­ternational Port Group (SIPG) along the Huangpu River.

Famous local tenors Wei Song, Shi Yijie and Han Peng celebrated the develop­ment of and history of the port with songs, along with children’s chorus from the China Welfare institute.

Stretching 1.2 kilometers along the riverbank, the site offers views of the Lujiazui Financial Zone across the river and the Bund. It has been dubbed the best place to take a postcard photo of the Bund, Lujiazui or the North Bund.

As a new highlight of the riverside attraction, an outdoor entertainment complex named Magic Jungle was of­ficially unveiled during the festival. The German-designed project features 94 challenges ranging in difficulty from low to high for both children and adults.

Many of the Jungle’s attractions have been introduced to the city for the first time. The “crazy stair” allows players to slide through a transparent and twisted slide while they enjoy a panoramic view over the North Bund waterfront.

The six-story giant swing can sway up to 50 degrees and players can control the movement themselves. The low bungee jump is suitable for all ages to experi­ence the extreme sport.

A children’s entertainment zone offers 16 attractions for parents and children. It has been certified to Europe’s top standards and has professional staff to ensure the safety of patrons.

Commercial facilities have been de­veloped nearby, including various food trucks.

Visitors can also dine in the neigh­boring SIPG Cruise Kitchen, which features many Internet-celebrated din­ing options.

The riverside area in Hongkou was the city’s earliest harbor for both cargo and passenger transportation.

The British East India Company built the first cargo dock in Xujiatan near what is now Daming Road E. in 1845.

There were once eight major docks along the Huangpu, including the famous Huangpu, Yangshupu and Gong­ping Road docks.

When workers loaded cargo in the 1950s, the sirens of the ships could be heard from far away.

It served as a major cargo transport hub until the 1990s when other major ports were developed in the city’s Pu­dong New Area and northern Baoshan District. 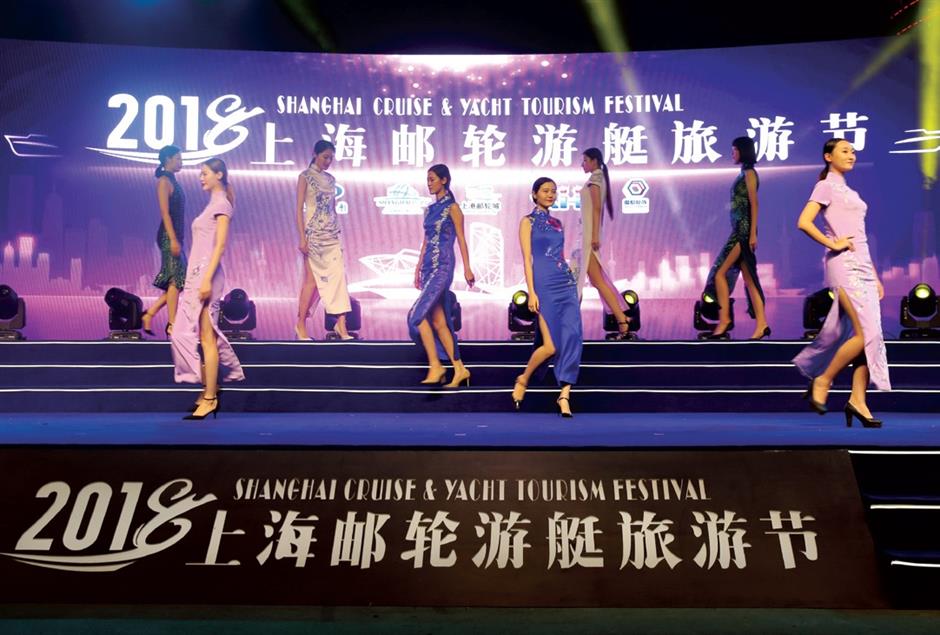 The opening ceremony of the Shanghai Cruise and Yacht Tourism Festival features singing, dancing and fashion shows. Also at the ceremony, SIPG Cruise City was officially unveiled as a level 4A tourist attraction.

The transportation center is the centerpiece structure for cruise liner passengers on the North Bund and is nicknamed “The Drip” because it’s blue and shaped like a drop of water.

It took only 10 years to turn the 140-year-old Gaoyang Road Dock, the city’s and the nation’s first port for foreign cargo, into a cruise liner hub. Docks and crane yards along the river have become wharfs for international liners. Hundreds of porters have been replaced by over a million foreign visitors from all around world every year.

The North Bund area opposite Lujiazui has been developing rapidly to become a world-class cruise liner hub and finan­cial center to support the city’s plan to become an international shipping cen­ter by 2020, according to the Hongkou government.

The city and district governments also plan to turn the North Bund area into an upmarket business district with office buildings and commercial facilities. The once glorious docks have been replaced by riverside parks, luxury hotels and the tallest building in Puxi, the 320-meter-high Magnolia Plaza on Dongchangzhi Road.

To commemorate its glorious history, the Shanghai Docks Heritage Museum has opened to public as one of the major attractions in SIPG Cruise City. The mu­seum within a riverside park includes industrial relics, sculptures, videos and other exhibitions about the historic docks along the river.

The museum highlights the history of celebrities and renowned scien­tists who entered Shanghai from the docks. They include Albert Einstein and Charlie Chaplin.

Other attractions at the cruise city include an authorized store of the SIPG football club, one of the city’s most pres­tigious football teams, where fans and tourists can buy uniforms, hats, flags and other merchandize. A vintage cafe featuring antique Forever bikes, the city’s oldest bicycle brand, has become a favorite place for selfies.

Visitors can also walk along the newly opened 2.5-kilometer riverside paths on the North Bund. They can walk or cycle from Waibaidu Bridge to Qinhuangdao Road along the river through new paths that serve walkers, joggers and cyclists. A skywalk and sightseeing platforms have been built to connect the three former bottlenecks — an outdoor restau­rant, a ferry port and a cruise terminal — along the waterfront path.

Luxun Park has the tomb of Lu Xun, considered the father of modern Chinese literature. Chairman Mao inscribed the “Tomb of Mr Lu Xun” on the large granite tombstone.

Music Valley has a historic former 1930s slaughterhouse that has been converted into the 1933 Old Millfun, which now hosts workshops, studios, bars and cafes.