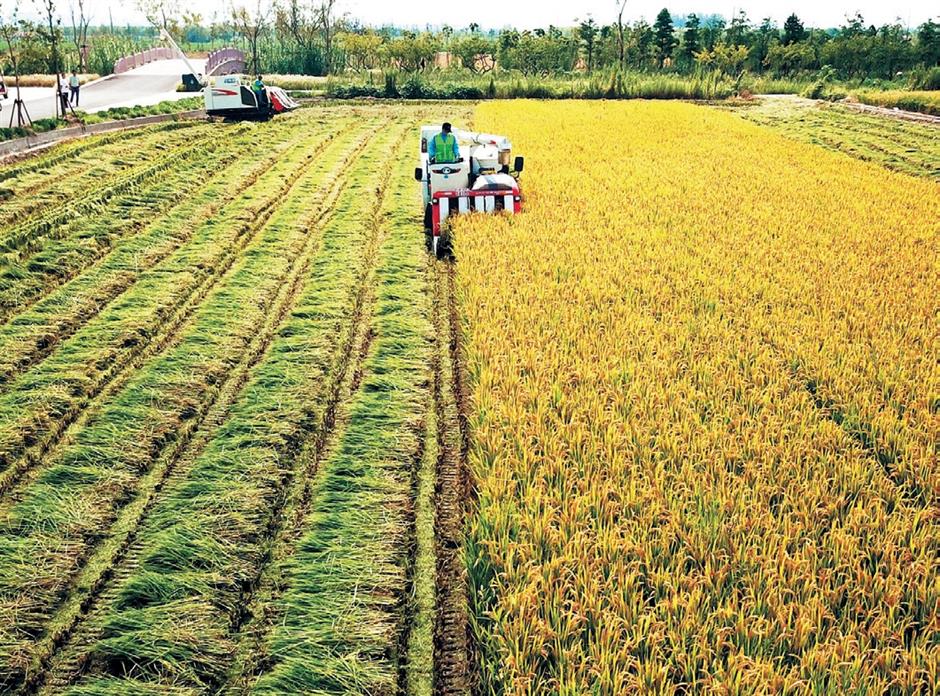 With the approach of harvest season, farmers at Jiading’s Jiabei Country Park have begun to reap the park’s 4,500 mu of rice. This year, yield of the early rice is expected to reach 450 kilograms, 50 more than last year’s harvest. Visitors to the park can buy the rice for 16 yuan (US$2.3) per kilogram.

Every Jiading resident has 17.7 square meters of green space while the forest coverage of the district has reached 14 percent.

More than 730,000 square meters of green space has been created in Jiading in the past 18 months. Some of it, such as at the intersection of Huyi Expressway and Jiacheng Road, is equipped with lighting, radio broadcasting and park furniture, providing residents with a place to exercise, walk, sightsee and rest.

Three more parks will be built this year, including one over Nanxiang Water Treatment Plant, an underground sewage treatment plant. The plant will use advanced AAO (anaerobic-anoxic-oxic) treatment technology to purify water and meet discharge standards.

The park will have a water themed science museum and fitness facilities and promote public awareness about environmental protection.

Meanwhile, Jading’s “100 parks” project is near completion as 93 parks have been built and opened to the public.

Preparation for the construction of another five parks, including one on the former site of the North Water Pass and one beside Haishang Cultural Museum, is underway. After completion, there will be 101 parks in Jiading.

The green corridor along the Jiading section of the Shanghai-Beijing High Speed Railway is also taking shape.