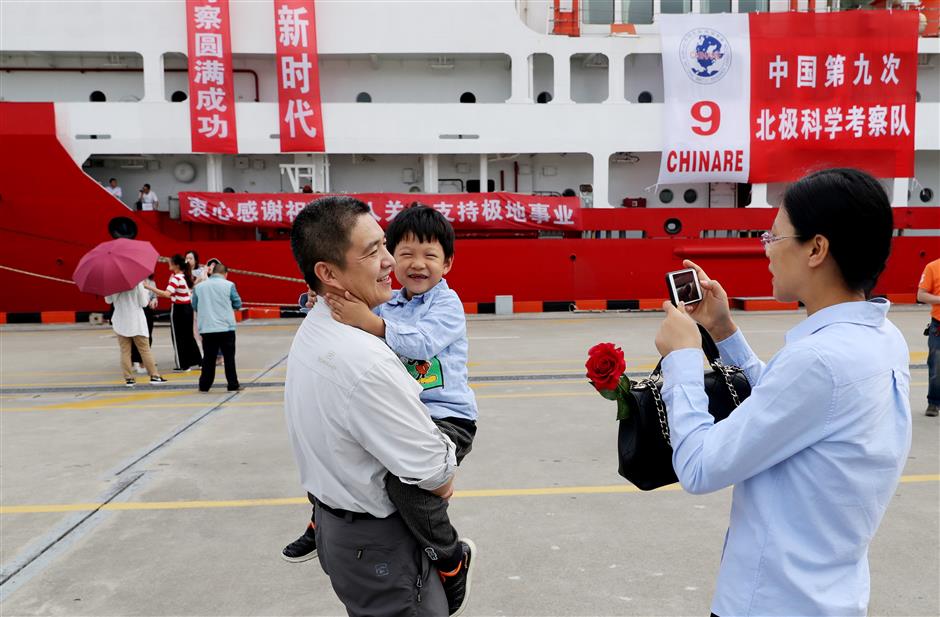 A researcher on icebreaker Xuelong poses for a photo with his child in Shanghai after the special-purpose ship returned to the home port yesterday.

Xuelong, with a 131-member crew, set off from Shanghai on July 20 and conducted researches on environment, submarine topography, ecology, fishing and sea ice in the Bering Sea, Chukchi Sea, Canada Basin and central areas of the Arctic Ocean.

During the expedition, China launched its first group of unmanned observation facilities, including unmanned ice station and underwater glider, which help in extending the Arctic’s summer expedition to winter.

Yang Huigen, director-general of the research institute, said the China-built unmanned ice station gives real-time monitoring on the formation and indexes of sea ice — an area of prime scientific and environmental concern.

The sea ice is caused by many factors, Yang said.

“The unmanned ice station can also keep a close watch on solar radiation, atmosphere, the temperatures in the ice layers, the growth of ice, the change in its thickness and the ocean current below it,” Yang told Shanghai Daily.

The research team also used 750-gram high-altitude balloon for air monitoring in the Arctic for the first time.

“China has developed or been developing three new important research facilities. Besides the unmanned ice station for sea ice, we also have laser radar for atmosphere and a non-polluting ice drill,” said Yang.

Since the balloon can reach an altitude of up to 30 kilometers, and radio waves can reach 60km to 100km, there is a 30km gap between them. To tackle that, the laser radar was developed.

The research team also cooperated with international research projects such as the Observatory for the Study of Arctic Climate and the Year of Polar Prediction during the expedition.