A float parade, an osmanthus blos­soming festival, an international darts tournament and several museum tours in the northern district are just some of the annual festival highlights.

“The festival aims to showcase the at­tractions, creativity and competitiveness of Baoshan, while allowing citizens to enjoy the fun of the cruise liner industry during the National Day holidays,” the Baoshan District government said.

The Wusongkou International Cruise Terminal in Baoshan, Asia’s largest cruise liner port, has been thrown open to the public, along with all of the nearby historical and cultural venues for the carnival which kicked off on September 23 and will run through to October 25.

To mark the opening of the Boashan Cruise Tourism Festival, 25 floats pa­raded along a 4-kilometer route on September 23. The floats started from the terminal port and passed through several major roads in Baoshan, includ­ing Baoyang, Mudanjiang and Mohe roads. The roads were closed to allow visitors to watch the parade between 8pm and 8:45pm.

The Baoshan float was themed on the “New era of the cruise liner industry and new prosperity of the city.”

The float was decorated with cherry blossom flowers, a popular tourist at­traction in Gucun Park, along with its historical landmarks such as the Wu­song Lighthouse, the cruise port and the development of Changtan residential and commercial area.

An exhibition about the terminal port, will be held at Paotaiwan Wetland Forest Park between October 1 and 3. Close to the terminal, the park at the mouth of the Yangtze was the site of a fortress and gun batteries during the Qing Dynasty (1644-1911). It is now an ecological park with forests and wetlands and home to several species of wild bird.

Not far from the port is the city’s big­gest osmanthus forest in Gucun Park. Over 10,000 osmanthus trees spread over 2.6 million square meters are in full bloom. The trees of various species have turned the park into a sea of red, orange, yellow and green flowers, giving the park a sweet fragrance, said Zhang Zhong, general manager with the park.

To better serve the large number of visitors, the park operator has prepared a number of cultural activities, such as a beer festival and concerts, as well as heritage skills exhibitions.

There will be music to liven up proceed­ings during the National Day holidays between October 1 and 7 near the No. 3 gate of the park. There’s also a creative market to allow visitors to taste various snacks and beer from Germany, while traditional handicraftsmen will teach vis­itors how to make an osmanthus sachet.

The park has also unveiled a new Chinese rose garden covering 356,000 square meters. It features 128 species of Chinese roses which have entered the blossom period through October. 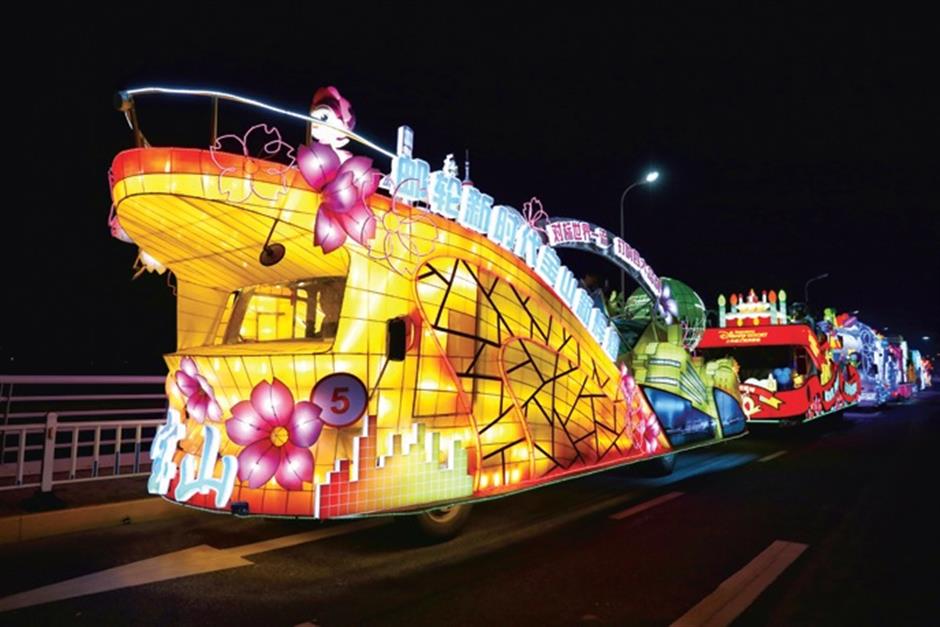 In the park’s neighboring Songnan Town, a darts, beer and music festival will be held over the weekend at Elite Valley at 258 Changjiang Road. Cheer­leaders along with professional and amateur bands will also perform.

Top darts players from home and abroad will compete in the Shanghai Darts Golden League over the weekend between September 22-24. Josh Mortens­en from New Zealand, an English teacher now working at an international school in Ningbo City, said, “Darts helps me make a lot of friends and I like the pres­sure during the competition.”

Songnan, a town which used to be an industrial center in the 1950s, has opened its industrial heritage to visitors. Among them are the former factories of the city’s earliest glassware plant, a motorcycle factory, an iron alloy plant, as well as a warehouse for China’s early exports.

These sites have been renovated into museums and creative parks. A well-preserved section of the Songhu Railway, China’s first railway in 1876, is also open to visitors.

Shanghai Museum of Glass has launched a major art exhibition named BRKN along with a display in a smaller scale, themed on “The Room.” The mu­seum, which opened in 2011, was listed as one of the top three most popular museums in China by CNN in 2012.

“For over seven years, we have been ex­ploring the infinite possibilities of glass here at the Shanghai Museum of Glass,” says Tilman Thürmer, the curator of the main exhibition. “Glass has a vulnerabil­ity which is almost similar to us humans. It shows us how fragile we are.”

In the other exhibition, rooms of various sizes and styles serve as large installations. Viewers will have inti­mate contact with stories and emotions through sight, sound and touch, accord­ing to the curator Cathye Yang.

A wood cultural festival is also being held in Baoshan to include wooden artwork exhibits, tea and furniture. Visitors can experience some simple woodworking at the Shanghai Wood Culture Expo.

Baoshan has been developing its tour­ist industry, led by the cruise liner port, to attract tourists from both home and abroad. Since the Wusongkou terminal opened in October 2011, it has become the biggest port for cruise liners in Asia, and overtook Barcelona as the world’s fourth largest port in 2016.

Thanks to the Wusongkou terminal, China is now the second largest cruise liner destination after the United States, by passenger numbers. The port received 466 ships and nearly 3 million passen­gers last year, accounting for nearly 60 percent of China’s total number of cruise liner passengers.

The Wusongkou terminal intends to showcase its service brand in the future and offer high standard, quality services to cruise liners and companies from around the world. The district has led the establishment of a service league with other Asian Pacific cruise liner ports to optimize its home port func­tions and improve services.

To better serve domestic passengers, the terminal has been offering shuttle buses to ferry passengers from the city’s Pudong and Hongqiao international air­ports as well as railway stations to the terminal directly.

Furthermore, the Baoshan govern­ment has signed a letter of intent with the China State Shipbuilding Corp, the nation’s largest shipbuilder, and Italian shipbuilder Fincantieri to develop the Shanghai CSSC International Cruise In­dustrial Park in Baoshan.