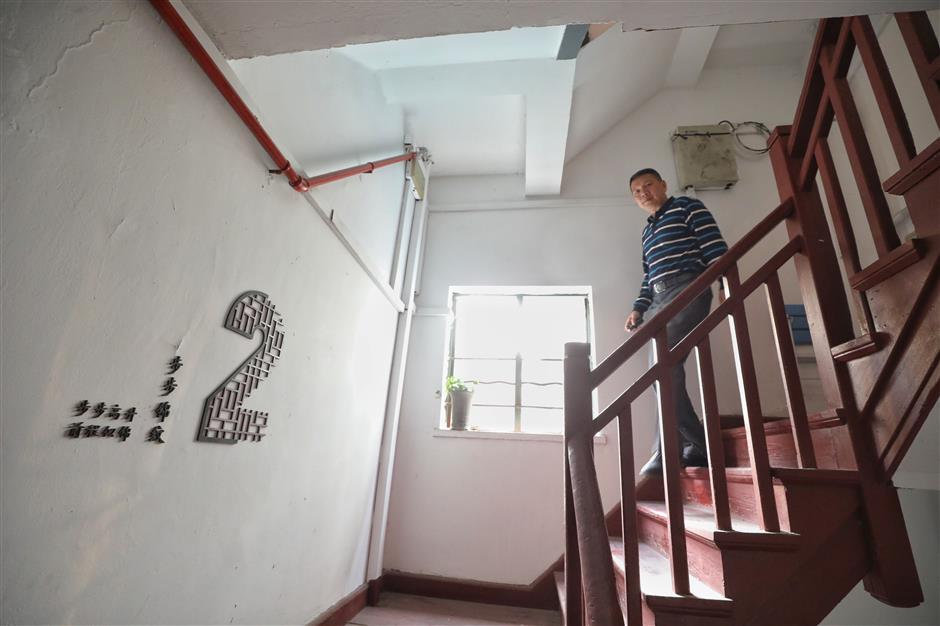 A resident walks down from the red wooden stairs at the No.26 building at Anshan Community in Yangpu District, one of the city's earliest worker's community built in 1955. The redecoration project upon the building has won the Honor Award and Sylvia Harris Award 2018 released by the Society for Experiential Graphic Design in the United States.

The project, “The Red Stairs” by sophomore students and their teacher at the College of Design and Innovation at Tongji University, redecorated the No. 26 building at Anshan Community in Yangpu District.

The building is one of the city’s earliest worker communities, built in 1955.

Inspired by the original wooden red stairs of the building, the student team developed a signage and graphics scheme that incorporated traditional Chinese patterns.

The project has won the Honor Award and Sylvia Harris Award 2018 released by the Society for Experiential Graphic Design in Minneapolis in the United States.

The work is part of the “Open Your Space” campaign, a cooperation began in 2017 between the college and the Siping Road Subdistrict to use modern designs and subtle renovations to revitalize old communities.

“This represents the power and ability that designers have to enhance everyday experiences for everyone,” a jury member of the US organization said of “The Red Stairs” project.

“Simple, inexpensive and highly thoughtful gestures activate an otherwise forgotten space. Spot-on, community-first design. We need more of this in the world.”

The five-story building at the Anshan No. 3 Community, which housed 20 households, lacked clear floor signage and doorplates.

“Visitors or deliverymen could not find the right doors,” said Qian Dongming, a resident who has been living there for nearly two decades. 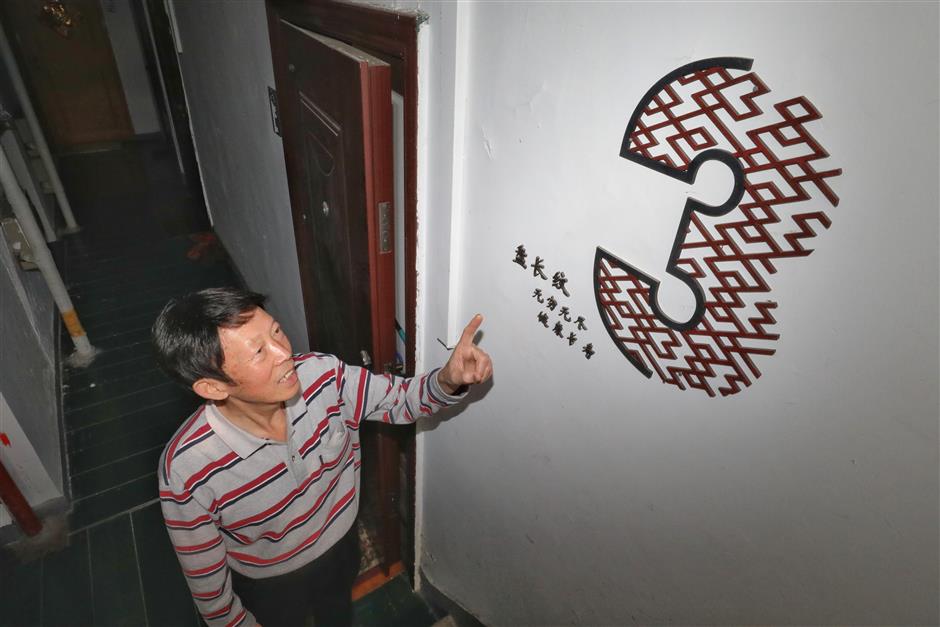 Qian Dongming, the head of the building's Party group, introduces the meaning of the traditional Chinese pattern used for the floor signage of the No.26 building at Anshan Community in Yangpu District. 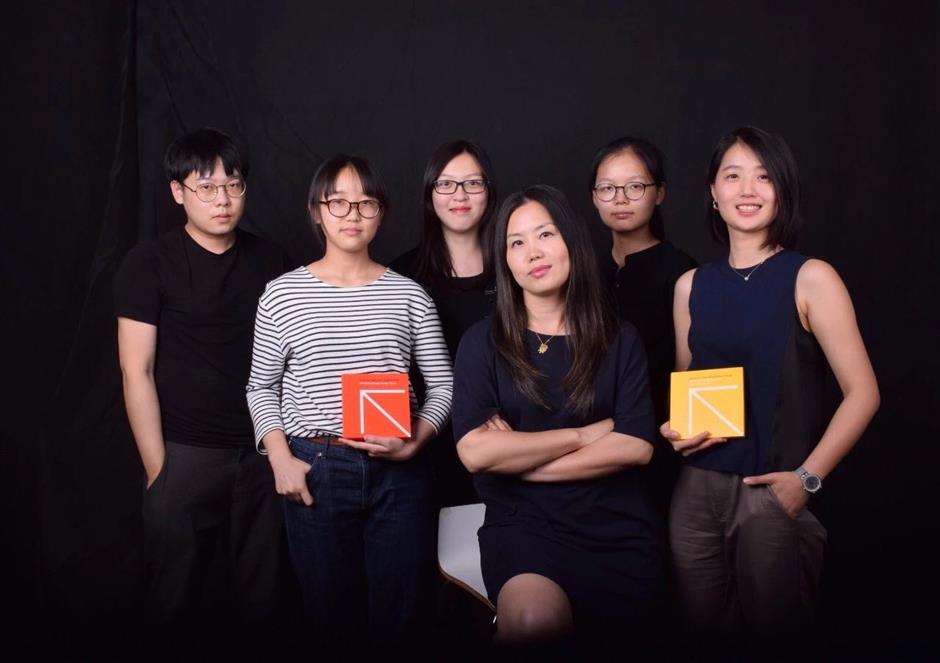 The design team from  the College of Design and Innovation of Tongji University which designed the public space at the No.26 building at Anshan Community in Yangpu District and won two global design awards.

The stairway and public areas were also jammed with residents’ belongings.

Ni Minqing, a professor with the college and 32 students are behind the redesign of the public space in 17 old residential buildings in the Siping neighborhood, including the No. 26 building where Qian lives.

“When we looked upward through the wooden stairs, we surprisingly saw the traditional Chinese patterns and got the inspiration,” Ni said.

She and three female students Gao Xiying, Lu Xin and Guo Jia began designing the floor signage and doorplates after soliciting the opinion of residents.

“The pattern on the first floor is back pattern, inspired by the view when entering the building and looking up, which represents safe return, good fortune and longevity,” a designer said.

“The second floor’s pattern is step-by-step pattern, which is a regular geometric pattern promoting best wishes toward a better future.

“The long pattern on the third floor expresses blessings and health. The use of windmill pattern represents rich resources, wealth and happiness, while the top floor’s ice crack pattern deployment, characterized by ice and snow melting, signifies the approach of spring and good wishes to come.”

Qian added: “Though the living space is limited and the building is old, the public space became beautiful and made us happy.”

Residents cleared their belongings from the corridor and decorated the stairway with green plants voluntarily, he said.

Similar design projects have been carried out at neighboring residential buildings.

The No. 578 building of the nearby Tongji Community was decorated with the theme of books as most residents are retired teachers from Tongji University.

Each household was invited to pick their favorite Chinese poem to be written beside the gates.

“The designing process helped the students to communicate with the residents, many seniors opened their hearts to the students,” Ni said.

A senior professor with Tongji, whose husband has just died, told the students she often went to a statue at the campus because the inscription was written by her husband. The students helped to involve the inscriptions into the decoration of the stairway to relieve her sadness.

In another building at 2026 Kongjiang Road, the students incorporated the 24 Solar Terms into the decoration of public areas, along with seasonal health tips.

The No. 123 building at the Anshan No. 1 Community has been re-named Do Re Me Mansion. Small sound boxes were installed beside the gate of each household.

The doorplates are small instruments that residents can strum the strings to play a melody. 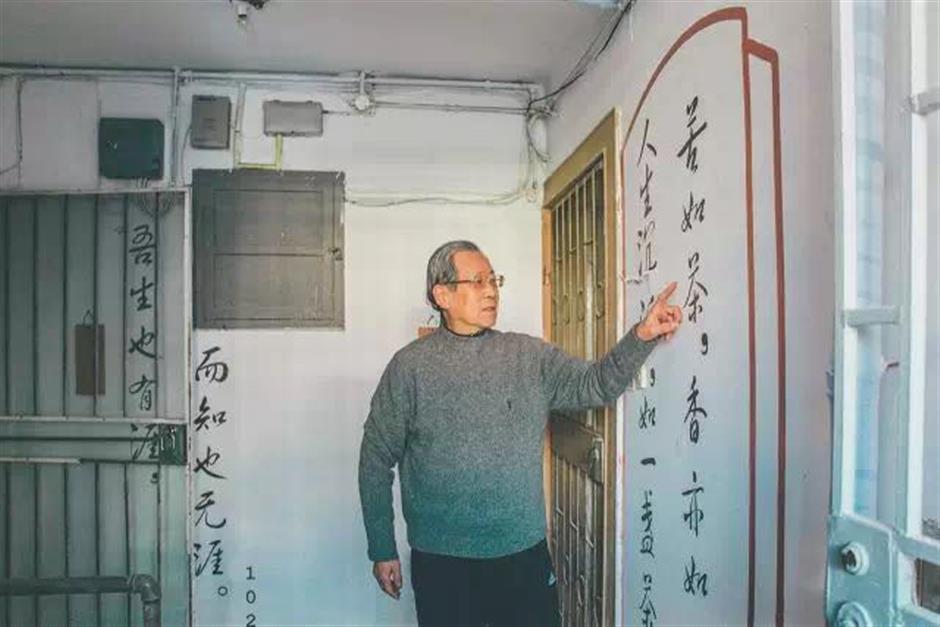 A resident introduces the poem written beside his door as part of a design project for the No.578 building of the nearby Tongji Community. The building was decorated with the theme of books because most of the residents are retired teachers at the Tongji University. 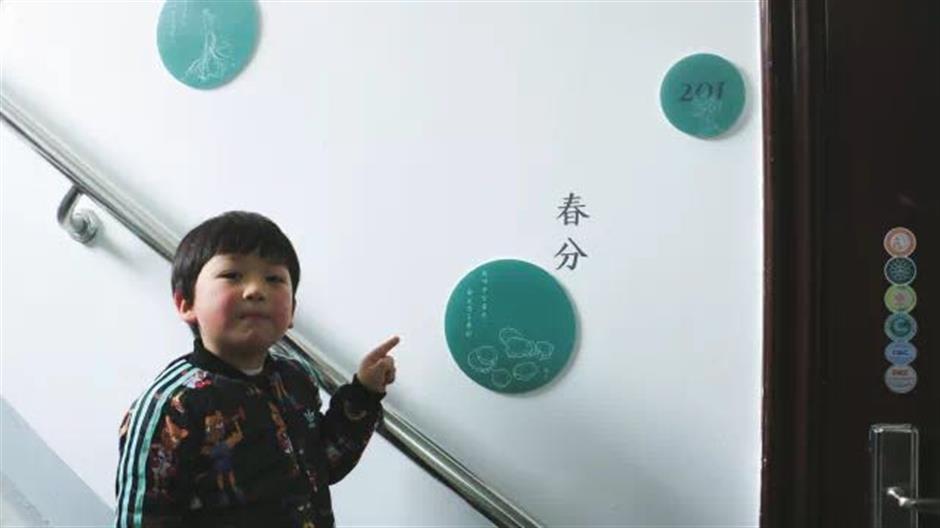 A child poses in front of a decorative pattern at 2026 Kongjiang Road, where the 24 Solar Terms are incorporated into the decoration of public areas along with seasonal health tips.

“The college aims to change people’s lifestyle and improve the living environment of communities with creative design,” Lou Yongqi, the dean of the college, said.

In addition to decorating residential buildings, the college has lined up innovative stores, workshops, labs and eateries — most of them run by startup companies and students of the college — on the street in the Anshan Community.

The street, which is named N-ICE2035 and translates into Neighborhood of Innovation, Creativity and Entrepreneurship toward 2035, gives the residents a chance to explore and experience unique restaurants, offices and entertainment venues that are built with new materials, as well as robots and artificial intelligence.

The Aroma Art lab, for instance, combines various scents of plants and flowers that are said to help treat bad cold and relieve anxieties.

These projects are part of the city government’s micro-revamping effort to improve the living standards of old communities while trying to retain the traditional layout and lifestyle of the neighborhoods. 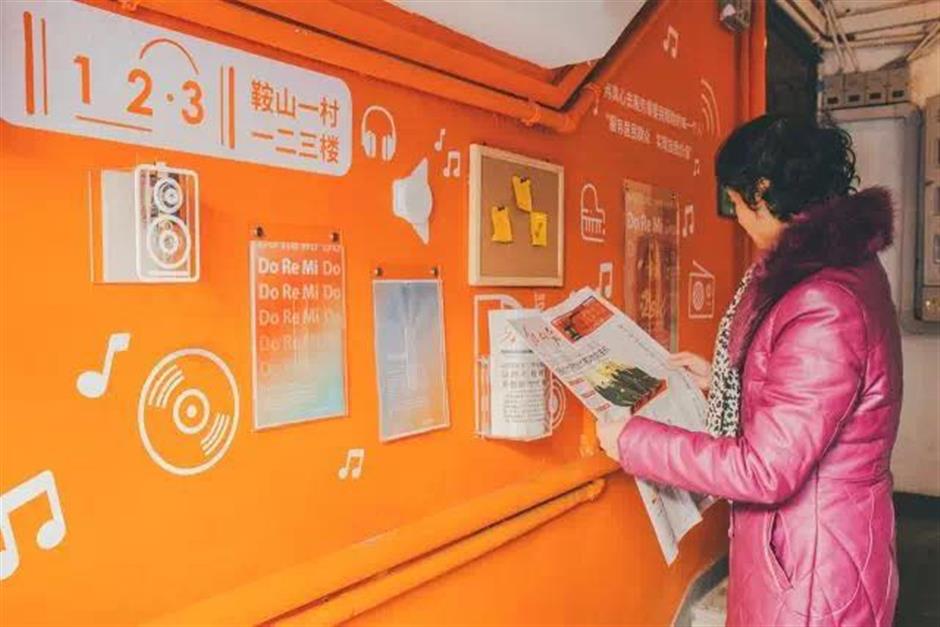 A resident reads a piece of newpaper at the No. 123 building at the No.1 Anshan Community which has been named Do Re Me Mansion as small sound boxes were installed beside the gate of each household. 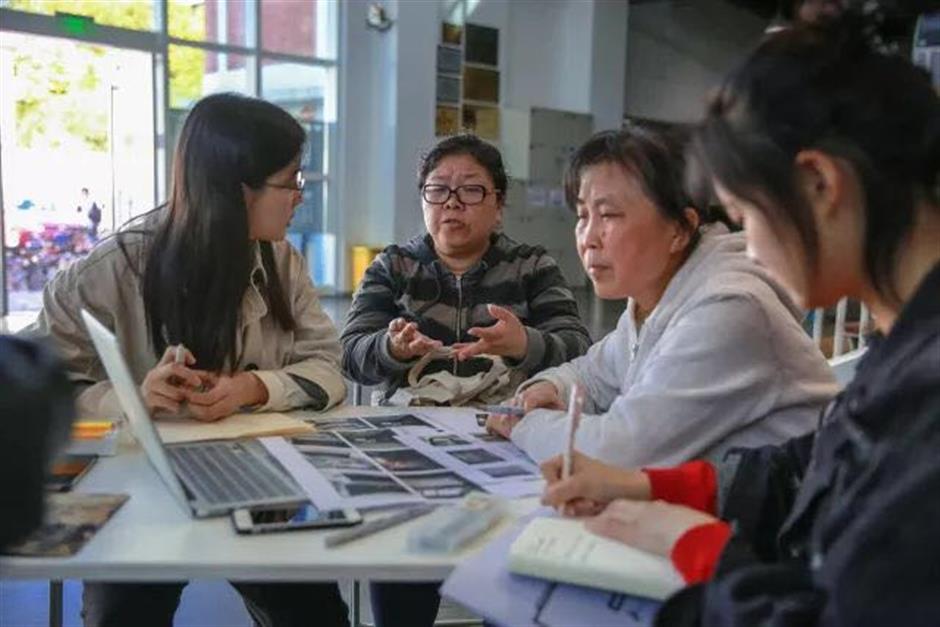 Design students with the College of Design and Innovation of Tongji University discuss their ideas with residents.