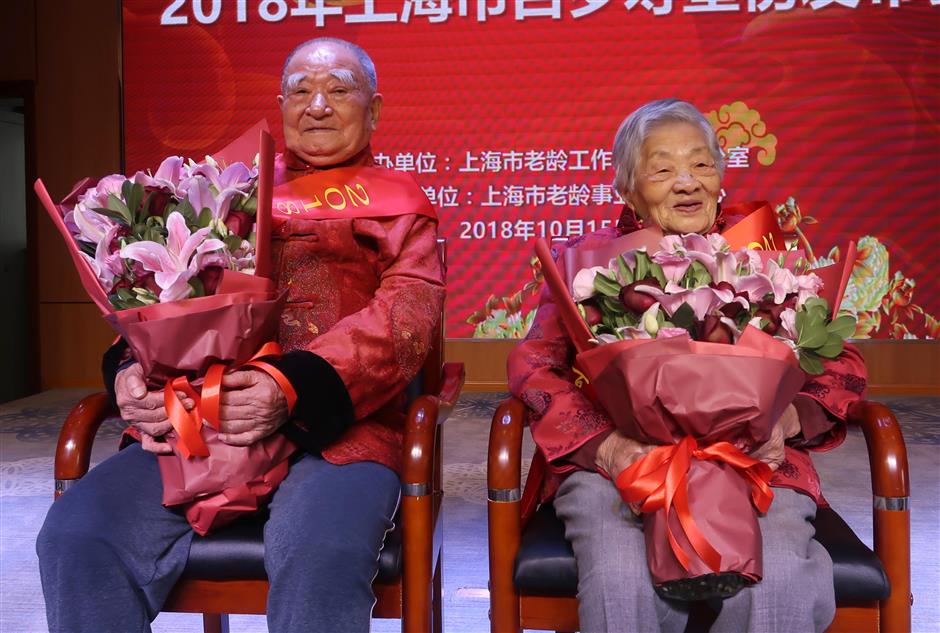 Shanghai has a record number of centenarians with a 111-year-old woman in Huangpu District the oldest resident in the city, local civil affairs authorities confirmed yesterday.

The city’s oldest man is 109 years old. Shanghai also boasts a centenarian couple who are 101 and 100 years old respectively.

Ahead of tomorrow’s Chongyang Festival, a day to cherish the seniors, 20 centenarians were honored with “longevity stars” by the Shanghai government yesterday.

The number of centenarians has gradually increased by the years. By the end of September this year, Shanghai had a record 2,281 people who reached the 100-year-old milestone, an increase of 246 people from the same period last year. Among them, 75 percent are women, according to the Shanghai Civil Affairs Bureau.

Xu Suzhen, who was born in 1907, is the oldest known person in the city. She lives on Huaihai Road M. in Huangpu District and travels occasionally to Hai’an City in Jiangsu Province where she was born.

Despite deteriorating eyesight and loss of hearing, she has a clear mind. She has two sons and a daughter.

Xu is a vegetarian and loves playing cards, but poor eyesight means she had to give it up, her daughter Chu Junli said.

“My mother is optimistic, even tempered, kind and prefers to keep a low profile,” said Chu. “She is very thrifty but helps out others when they are in difficulties. She enjoys chatting and taking a stroll when the weather is good.” 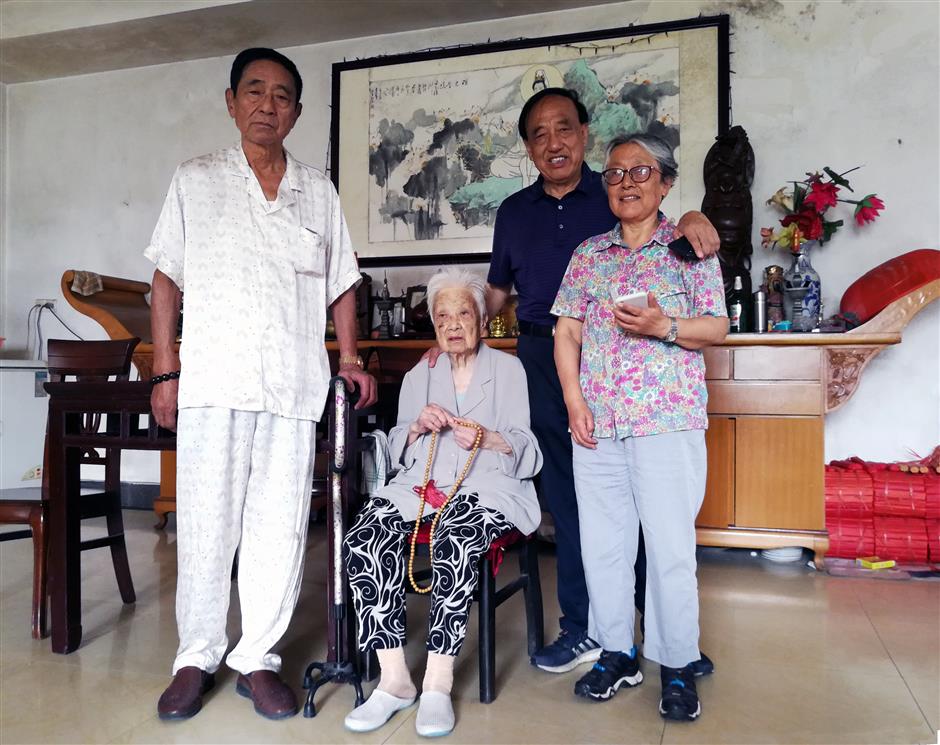 Xu Suzhen (second left), the city's oldest resident at 111 years of age, poses for photo with her family on September 23, 2018.

Song Honggen, 109, is the city’s oldest man, and lives in Jiading District with his daughter’s family. Except hearing problem, he does not have any age-related issues. He likes chopping wood.

According to him a balanced diet and regular lifestyle are the secrets of his longevity.

Su Ayin, 110, is the second oldest resident in the city. Hailing from Zhuqiao Town in the Pudong New Area, her family of 80 extends to five generations.

She enjoys playing mahjong with her four sons.

“My mother is very mild tempered and rarely quarrels with anyone,” said Zhou Guomin, Su’s son. “Her hearing is not good but her mind is clear. She remembers which date we visit her ...”

Su likes meat and soup, but not vegetables. 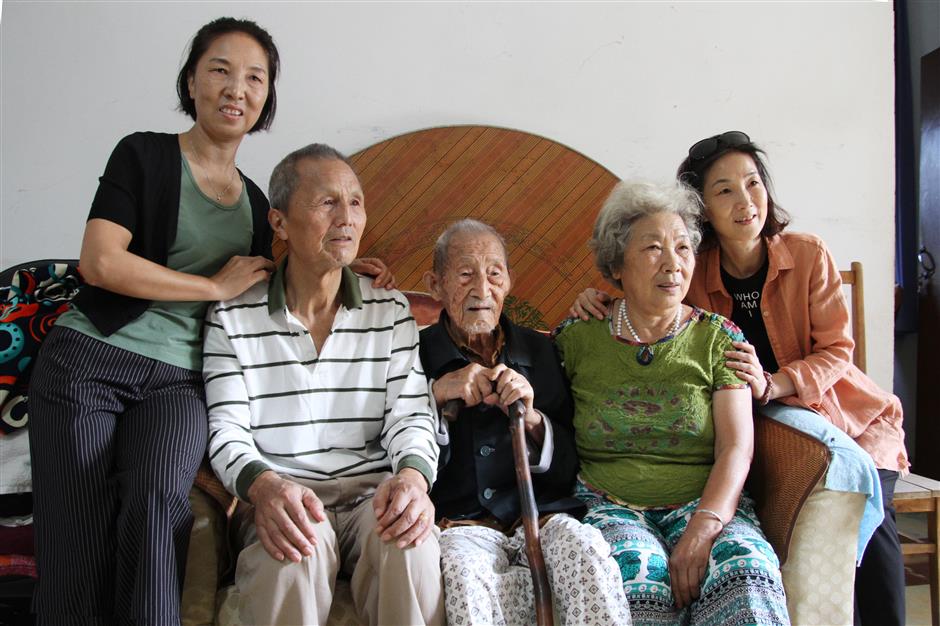 Song Honggen (center), the city's oldest man at 109 years of age, poses for photo with his family in September this year.

Fei Henian, 101, and Xu Manqian, 100, is the city’s only centenarian couple. They live in Changning District and were students of Shanghai Jiao Tong University. Fei was a teacher and his wife an accountant before they retired. They have been married for 77 years, and are very strict about their meal timings. Xu still keeps a tab about their eating habits every day.

“Although centenarians are a small group in Shanghai, they reflect the social development of the city, its medical treatment and hygiene conditions, culture, family ethics and the development level of the city’s senior care services,” said Jiang Rui, deputy director of the bureau. 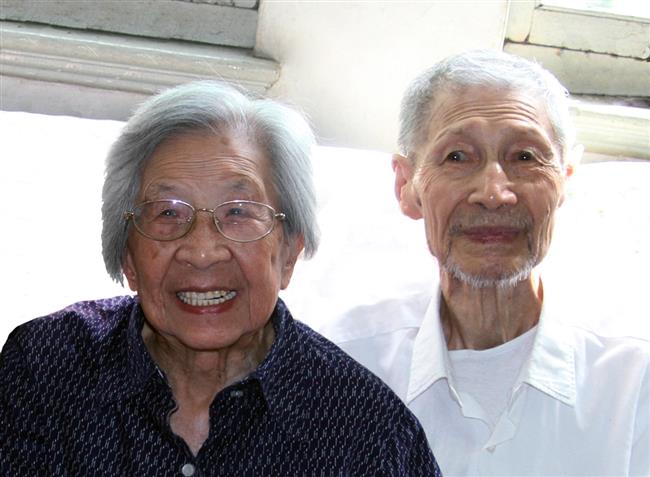 Fei Henian, 101, and his wife Xu Manqian, 100, the city's only centenarian couple, pose for photo in September this year.

Family is a very important factor for their longevity and authorities said they would continue providing support to the city’s seniors.

Although the centenarians come from different background, they share some similarities, according to Shanghai Senior Work Commission Office. They are broad-minded, even-tempered, not fussy about their food, not lazy, don’t smoke, control alcohol, sleep and exercise regularly.

They live harmoniously with their families and are looked after well by their children and society, the office said.

The Pudong New Area had 491 centenarians in total, followed by Xuhui and Huangpu districts, which had 209 and 207, respectively. In total, their centenarians accounted for 42 percent of the city’s total.

According to a white paper published in Beijing, the capital’s elderly people tend to live a longer life, Xinhua news agency reported yesterday.

The number of people in China aged 60 or above reached 241 million by the end of 2017, accounting for 17.3 percent of the total population. The number is expected to peak at 487 million around 2050.