Full steam ahead to the future of cruising 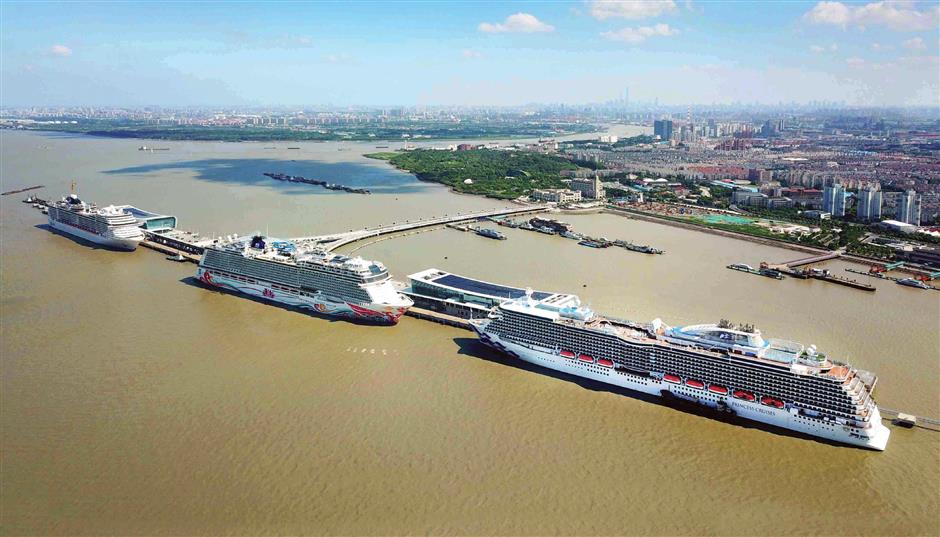 The world’s cruise industry leaders met in Baoshan in the northern Shanghai yesterday to discuss the growth potential of the China market in the next decade.

The Seatrade Cruise Asia Pacific conference, which runs through tomorrow, aims to find opportunities for China’s cruise industry and explore how to balance market growth and stainability.

Top executives from the world’s major cruise lines, government officials and cruise industry stakeholders have been focusing on the development of shipbuilding and improving the services that Baoshan’s Wusongkou cruise terminal can offer.

A travel agent training day will improve the services of cruise agents.

It is the third time Baoshan has hosted the Seatrade Cruise Asia Pacific conference. The first congress was held in this district in 2016.

Sponsored by Seatrade UBM, Wusongkou Cruise Terminal and Shanghai International Cruise Business Institute, the session also included an interesting discussion on how cruising can accelerate the growth of the outbound travel market.

China’s outbound travel market has benefited from the increasing number of the middle-class, resulting in a group of people with more buying power who are willing to purchase mid- to high-end travel products.

About 50 speakers are committed to addressing the conference, including representatives from the global cruise lines, associations, ports and shipyards.

Ahead of the session, delegates were invited to visit Shanghai Wusongkou International Cruise Terminal followed by an evening reception yesterday.

Baoshan is developing its tourist industry, led by the cruise liner port. Since the terminal commencement in October 2011, it has become the biggest port for cruise liners in Asia, overtaking Barcelona as the world’s fourth largest port in 2016.

Baoshan will develop the terminal and its cruise liner industry to promote Shanghai’s four brands: culture, manufacturing, service and shopping, according to the district government.

To highlight the “manufacturing” brand, Baoshan has signed a letter of intent with the China State Shipbuilding Corp, the nation’s largest shipbuilder, and Italian shipbuilder Fincantieri.

Under the scheme, China’s first domestically developed luxury cruise liner is expected to set off on its maiden voyage from Baoshan by 2023.

It will comprise sightseeing tourist offices, a shopping center themed on aerial and marine explorations and a five-star business and leisure hotel.

To create a “cruise liner culture,” the district has hosted leading world summits and conferences, such as the Seatrade congress. It has also hosted the annual Shanghai Cruise Liner Tourism Festival, which includes a float parade, osmanthus festival and wedding ceremonies on cruise liners.

• Wusongkou International Cruise Terminal received over 10 million passengers as of May, reinforcing its status as the world’s fourth largest cruise ship home port.

• Frequent high-end conferences on domestic and international cruising have developed many innovative models for the international industry.

• The manufacture of domestic luxury cruise ships has been accelerated along with cooperative and development in shipbuilding.

Captains of cruise industry chart the course ahead

With the increasing number of tourism products and more fierce market competition, high-quality development is important to the international competitiveness of China’s cruise tourism.

Only through high quality can cruise tourism break into the influential “happiness industry” among other tourism sectors.

This is an important mission given to the development of China’s cruise tourism in the new era.

In order to better promote the high-quality development of the cruise economy, first, to promote the effective supply of cruise tourism and market demand.

Second, build a distinctive product. Third, to create a new order for development of cruise tourism.

President of the Maritime Group, Seatrade, organizers of the event

China is the second leading source market in the world, yet penetration in China’s mainland is just 0.17 percent.

There is huge potential for further growth and as cruising is turning into mainstream travel for the Chinese, the market is entering the “Golden Decade.”

In 2018, overall cruise capacity deployed in Asia will show a small decline of 2 percent versus the planned ship calls in the previous year.

However, the outlook for Asia remains positive, as cruise lines continue to deploy significant capacity in the region, including brand new, large cruise ships purpose-built for Asian consumers.

Chairman of Carnival Corporation in China

The cruise industry has become a development priority for the Chinese government at all levels.

A series of supportive policies have been issued to create a cruise business-friendly environment.

Although the growth of China’s cruise market has slowed since 2017, we believe with support from government at different levels and the joint efforts of cruise lines, ports and travel agencies on fostering cruise market, improving cruise products and optimizing distribution channels, the development mode of China’s cruise industry will shift from high-speed to high-quality and achieve sustainable growth.

Although the number of Chinese cruise passenger in 2017 reached nearly 2.5 million, it is still very much “niche” compared with the huge number of outbound tourists, and is closely related to consumers’ knowledge of cruise ships.

High-quality products and experiences should be a prerequisite for cruise lines to operate in the China market.

At the same time, the timely introduction of some targeted policies and regulations can also help the industry and solve some of the current pain points.

At present, the cruise consumption in China’s first-tier cities is entering the 2.0 era with more emphasis on experience from the first experience 1.0 era. In this period, cruise travelling should be a vacation choice of higher repurchase rate and conventional, consumers will pay more attention to the multiple experiences on the cruise, such as the dining, services, facilities and entertainment, and focus on the overall holiday experience.