Underdeveloped African nations get a go at the China market 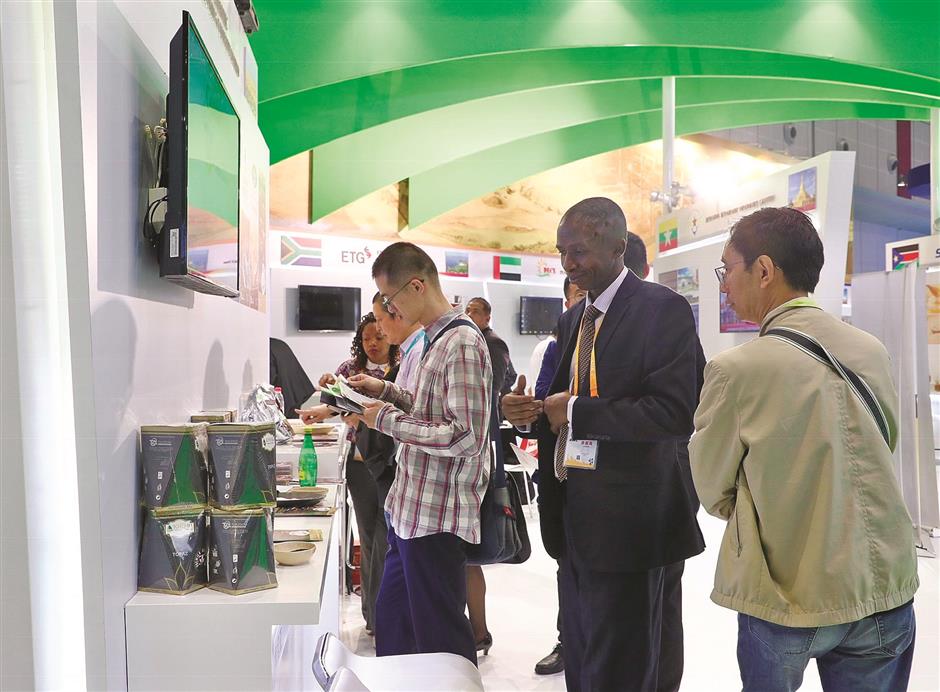 Visitors to the import expo check out the pavilions of African countries.

South Sudanese businessman Kuyu Dhel picked up a few Chinese phrases as he manned a stall at the first China International Import Expo.

Bu neng chi, or “not edible,” were the words he uttered most frequently, he said, as Chinese visitors perusing his stand of nuts, dried flowers and sorghum puzzled over gum in small, irregularly shaped blocks.

They were looking at gum Arabic, which is a natural gum made from the hardened sap of two species of acacia trees. Translated from Arabic to Chinese, it’s called a la bo jiao. Dhel tried to explain to curious visitors that the gum is used as a food stabilizer.

Dhel’s business card lists him as a consultant for Ramciel Multipurpose Co-operative Society, and the company’s address is on Chinese Friendship Hospital Road. The company’s presence at expo is all down to the Chinese government.

“The Ministry of Commerce helped facilitate everything including a free booth,” Dhel told Shanghai Daily at his busy booth. “To the best of my knowledge, we are the first South Sudanese to come tapping on China’s door for a new market.”

President Xi Jinping said two months ago that the least developed African countries would be exempt from exhibition fees. He also pledged to increase China’s imports from the region, especially non-resource products.

The United Nations lists South Sudan as one of the 47 least developed countries, based on factors such as gross per capita national income and adult literacy. According to China National Radio, about 30 of the 47 countries on the list are participating at expo, many from Africa.

“The expo has built a very good platform for companies around the world, including those from Senegal,” said Alioune Sarr, Senegal’s minister of trade, consumer affairs and medium-sized enterprises.

He also praised China’s decision to focus on further opening up its markets to foreign goods and services.

Senegal and Ethiopia, both on the list of least developed countries, have national pavilions displaying specialty goods. Underdeveloped countries are mostly in the agricultural and food halls, offering products like tea, coffee, cocoa and grains. African nations have also brought along colorful handicrafts, fabrics, gems and diamonds.

China has been Africa’s largest trading partner for nine consecutive years. By the end of 2017, the value of that trade was US$170 billion, 17-fold higher than that in 2000. Growth is expected to remain in double digits for the next five to 10 years.

When at home, Dhel watches the China Global Television Network (CGTN) program “Africa Live,” where he first learned about the import expo.

“President Xi’s idea of having this import fair in Shanghai is just great because this city has long been a commercial center,” he said.

Dhel, who speaks seven languages, studied and worked in Germany and traveled around Europe before returning to South Sudan to work on Ramciel food imports from Dubai, Kenya and Uganda.

“Our agricultural industry is new, but it is quickly growing,” he said of the young nation.

“I always thought of visiting China in terms of climbing the Great Wall, never thought of doing business here,” he said. “So many Chinese buyers have expressed interest in our products, and some were eager to do deals on the spot.”

He added, “I have been making observations and absorbing so that I can go home and digest all the information that will be useful for our business and for those companies that follow us into China.” 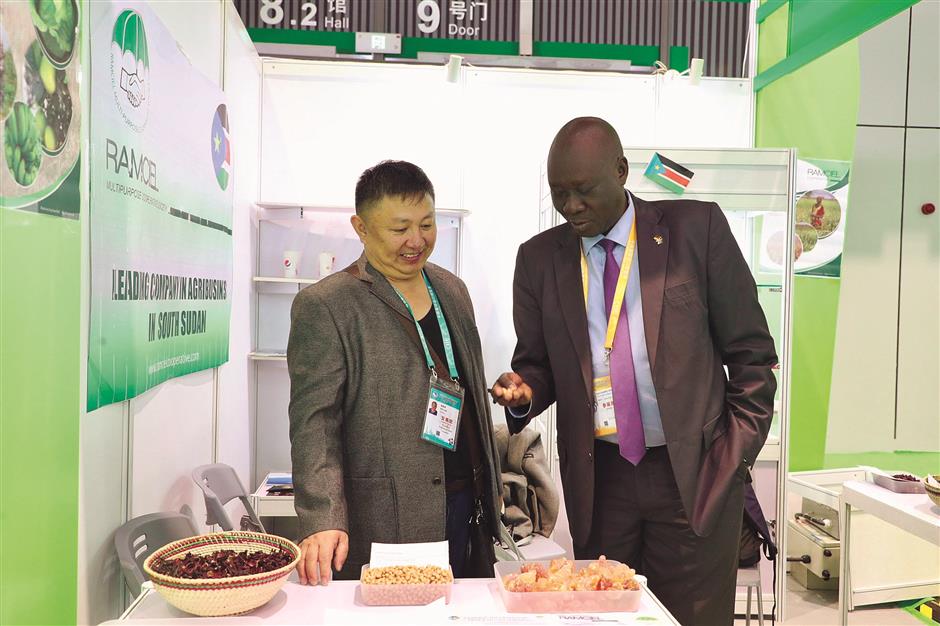 Zheng Qijun, a representative from a small private trading company in Guizhou discusses details of a purchase of nuts with South Sudanese businessman Franco Yousif Dobu. 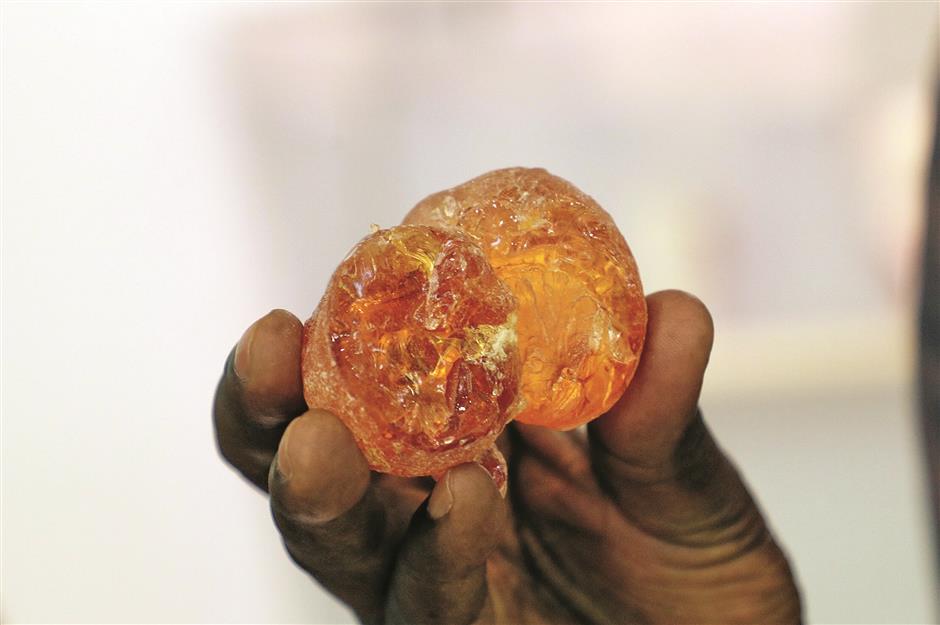 The gum Arabic brought by Sudanese, which is a natural gum made from the hardened sap of two species of acacia trees.

“China has big opportunities for business with African countries,” he said. “Previously, people wanted to sell to America the most, but now many regard the China market on par with America.”

A Chinese buyer was eyeing Ramciel’s sample of nuts for sale as Dobu talked with Shanghai Daily. The two men quickly got into a serious business discussion, with the Chinese buyer expressing interest in purchasing one or two containers of the nuts. They discussed details of a letter of credit and transport through Mombasa port of Kenya.

“I have bought African products before because they are not genetically modified, but all through other traders,” said Zheng Qijun, who identified himself as a representative from a small private trading company in Guizhou. “I want to take advantage of this expo to see whether I can make some contacts and start some direct purchases.”

Zheng also got curious about gum Arabic. The South Sudanese explained to him that it is an African product that got its name from old Arabic merchants who were the first sell it globally.

Dhel asked Shanghai Daily, “What is tao jiao (peach gum)? Why are all the Chinese visitors asking me if gum Arabic is tao jiao?”

As the journalist explained that many Chinese women eat peach gum regularly as a beauty treatment, Dhel’s eyes lit up at a possible new business opportunity.

“I need to go back and see what we have,” he said. 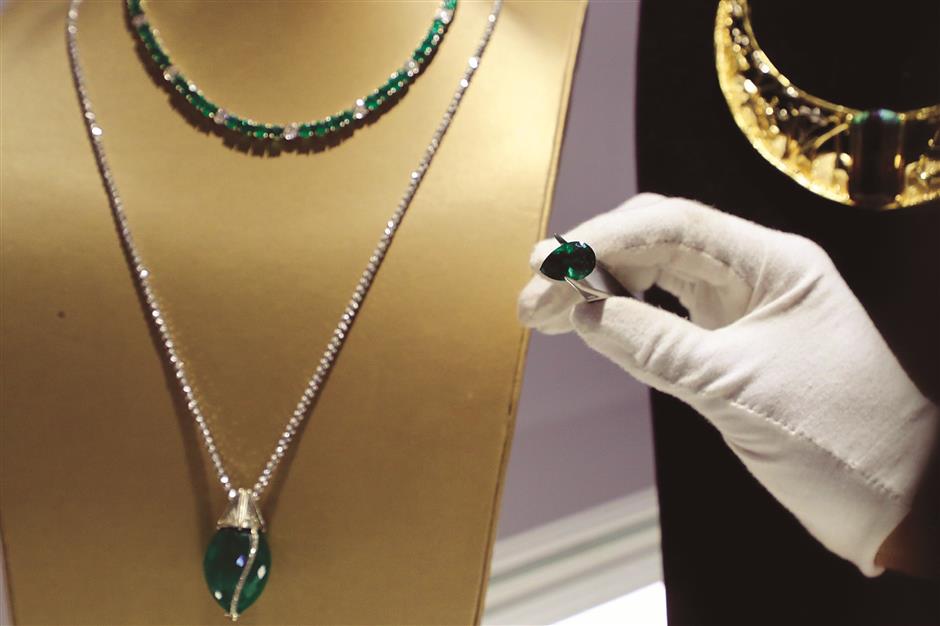