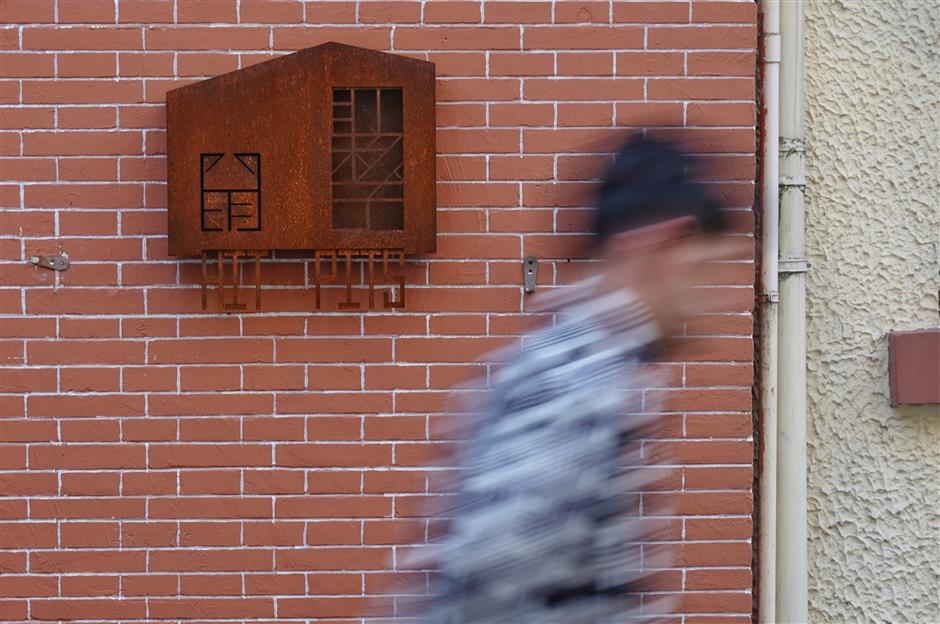 Colorful stainless-steel signs that were not felt to reflect the area’s ambience have been replaced with new ones in the shape of a window and a seal with the names of jiuzi games in English and Chinese.

When Tongji University’s Li Yanbo visited Siming Tiyu Long in 2016, he was shocked by what he found in the heritage-listed neighborhood.

“It was a sunny spring afternoon, and I expected to see old people sitting on benches chatting or walking around the beautiful lanes enjoying the sunshine,” he said.

“But what I saw was an empty neighborhood, as if deserted, with junk and garbage everywhere.”

Today Siming is considered one of the most dynamic old neighborhoods in Shanghai. Its 1930s Spanish-style villas are home to about 4,500 residents, more than 60 percent of whom are considered elderly.

A spacious public area allows neighbors to get together to chat and practice some traditional sports.

The Jing’an government says Siming is a blueprint for converting listless, rundown old neighborhoods into happy, attractive places to live.

So, how did a once crowded old neighborhood, where alienated residents fought over every square meter of personal space and dumped junk everywhere, undergo such a transformation?

Much of the credit has to go to Li, an architecture professor.

Back in 2016, he pondered the problem of how to create public space that would revive the spirit of the community and bring residents closer together.

“It was urgent to connect neighbors,” he said.

Li began to put in place a set of “micro-renovations,” — measures to improve the neighborhood — but it certainly was not easy.

“It was such a brilliant idea,” said Huang Yuling, neighborhood Party secretary, “but we encountered many problems, especially opposition from residents. We held nearly 10 meetings, but opinion was widely divided.” 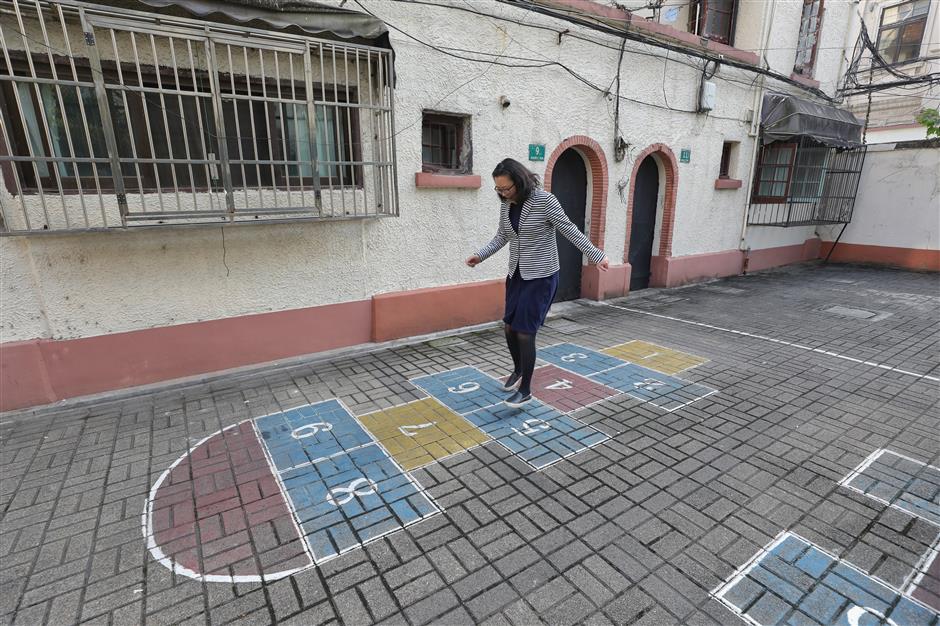 A woman plays hopscotch, one of the jiuzi games, in an alleyway. 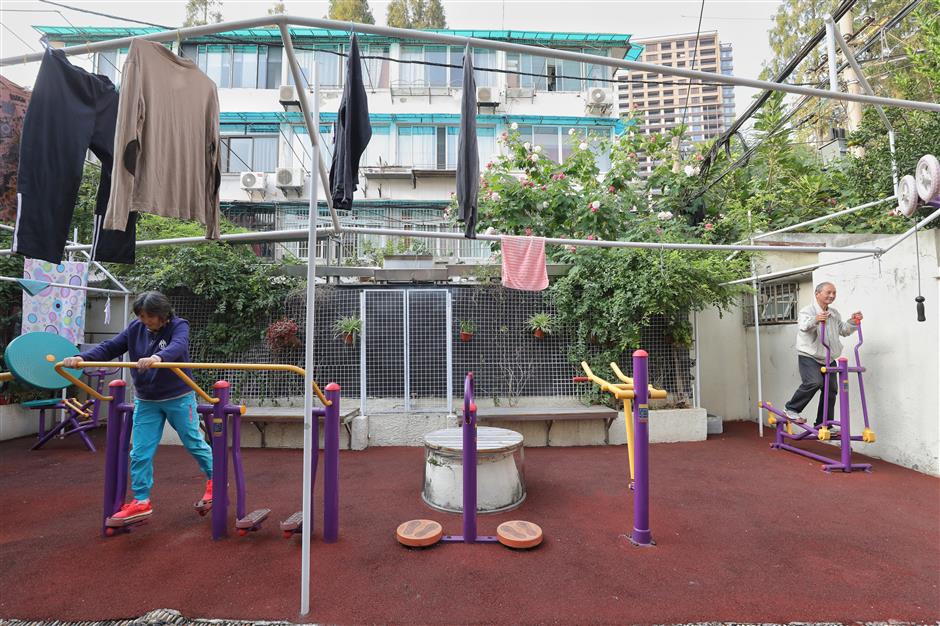 A retractable cover protects the sports venue from the elements. Roof solar panels powering LED lighting allow the facility to be used after dark. The site includes a drying area with clothes lines.

Some wanted an open space in the neighborhood be equipped with a table tennis table. Others said that would be too noisy at night. Some suggested a green wall with flowers. Others said it would affect the drainage system.

“Finally, we reached an agreement and decided to start work on a disused community sports venue,” Huang said.

Li still remembers a family who lived close to the venue.

“They were vociferously against the plan because they had appropriated part of the site as their own backyard,” he said. “But later, they were happy to see the unkempt area turned into something clean and beautiful.”

When he visited the neighborhood again, Li was invited to join the family for lunch.

The sports venue was less than 40 square meters in size, but it took 14 months to renovate.

Li visited the neighborhood more than 100 times, listening to residents’ gripes, ideas and needs. For example, women wanted a place to hang laundry.

So the new sports site includes a drying area with clothes lines. It also has fitness equipment for all ages, and tables and chairs for residents to hang out and chat with one another over tea.

A retractable cover protects the site from the scorching sun and pouring rain. Solar panels on the roof of the center power LED lighting after dark.

Rainwater is collected for use in cleaning, firefighting and watering plants.

“We all love this place,” said life-long resident Kang Ti, 71. “I come to water the flowers every day. It’s not a mandatory task, but rather something I really enjoy doing.”

The center’s retractable cover was damaged in this summer’s storms and had to be removed. Li is working on a solution to prevent that from happening in the future.

“Any design may have unforeseen flaws,” he said. “When problems arise, we try to solve them. Micro-renovations like this are always a work in progress, ever changing.”

Another of his projects was signage.

In additional to its architectural heritage, Siming is known as a “sports neighborhood,” a term harking back to the 1990s.

Residents in those days were keen on jiuzi, literally the “nine games” that were traditionally played in old lanes half a century ago. The games include hopscotch, hoop rolling, ring tossing and Chinese yo-yo.

Some years back, the neighborhood committee installed nine signs on the facades of buildings to try to honor that heritage.

“They wanted the signs to evoke the nostalgia and the uniqueness of the neighborhood,” said Huang.

So Li chose rusty, red-brick-colored materials to make the signs, and at the top of each was the design of one of the villas of the neighborhood.

Each sign also displayed the name of one of the nine games, in Chinese and English.

“We also designed a neighborhood logo for Siming in recognition of its cultural ambience,” Li said. “We used zhuan ti, a calligraphy script regularly used in art.”

The logo takes the shape of a window and a seal.

A retractable cover protects the sports venue from the elements. Roof solar panels powering LED lighting allow the facility to be used after dark. The site includes a drying area with clothes lines.

“Everyone — from seniors to young office workers — is eager to participate,” Huang said.

“Every carnival draws around 200 participants squeezed into the alleyway. We have been brought together and the community is more alive today than ever.”