Public toilets where you don't have to hold your nose

There used to be a saying in China that you could find a public toilet by following your nose. Li Ying, a 36-year-old Shanghai sanitation worker, has turned that image on its head.

“The popular image of public toilets in China is dirty and smelly,” Li said. “I wanted to change that. I wanted to make toilets not only clean, but also beautiful.”

Cited as a model worker, she now manages 43 public toilets as director of the toilet cleaning department of Jing’an Urban Development Group.

Her methods are so effective that they have been adopted across the district.

Born in rural Jiangsu Province, Li came to Shanghai alone when she was 17 years old. With only 200 yuan (US$29) in her pocket, she took a job as a textile worker. When the factory closed, she worked in a restaurant and later in sales.

In 2004, she became a cleaner at a toilet inside the Longtan residential complex, a community built in the 1980s.

“Because most cleaners were in their 40s or 50s, they thought a girl my age wouldn’t last long, much less do a good job,” she said.

The toilet was old, dirty, smelly and wet when she arrived with her scrubbing brushes. She worked from 5am to 10pm every day, cleaning up after about 1,000 daily users.

“Seeing the filth made me lose my appetite, and working in one toilet 17 hours a day was boring,” she recalled.

It was especially frustrating when users soiled a toilet she had just cleaned.

The men’s toilet was particularly dirty, with spit and cigarette butts all over the floor and various unpleasant substances being tramped outside. Such was the state of the place that Li was inspired to create her unique “tracking” method and start saving water.

Every time someone used the toilet, she immediately cleaned the cubicle. Every night, she flushed out the sewage connections and sanitized the area.

“It was really exhausting,” she said. “At the end of the day, I felt as if I had walked several kilometers. My body ached from bending over so much.” 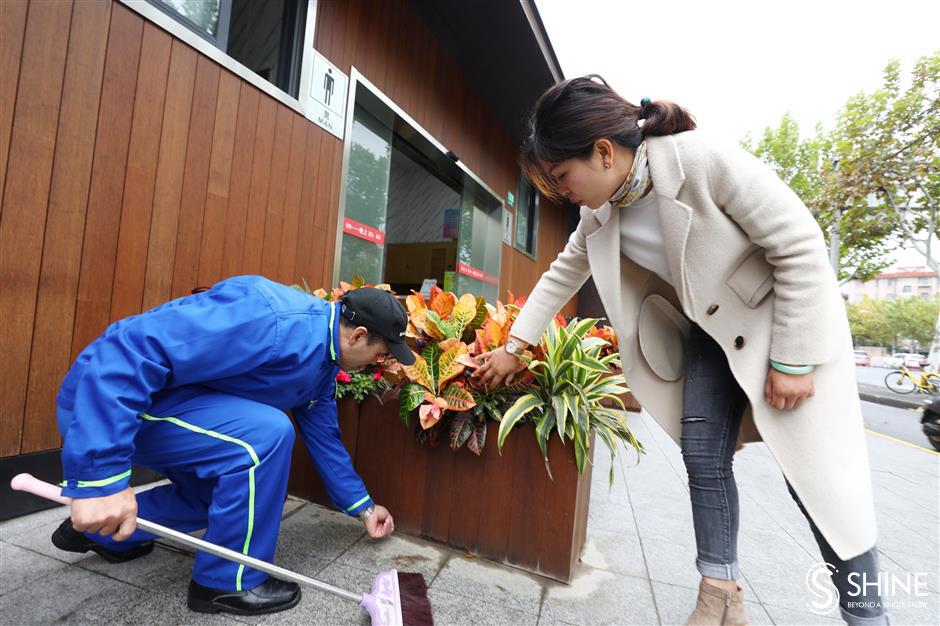 Li Ying checks up on work outside a public toilet on Hutai Road. Li is now responsible for 43 public toilets, 20 of which — including the one where she first worked — are being upgraded into “smart public toilets.”

In winter, she suffered chilblains. Even during plum rains, she kept the toilet odor-free. Residents said that it was cleaner than those in their homes.

To brighten the area, she burned sandalwood incense, brought bonsai and tropical fish, hung newspaper baskets, installed a clock, an ashtray and hand sanitizer, posted weather forecasts on a blackboard and played music, all paid for out of her own pocket.

The land in front of the toilet was nothing but mud, so Li and her husband filled it with pebbles. To assist a wheelchair-bound resident, they paved a 20-meter brick path to his home.

After years of hard work, the area had been transformed into a beautiful garden. She built a bicycle shed in front of the toilet and put a bench outside. She made a medical kit after seeing someone hurt during morning exercises.

Because the residential complex was old and the toilets in many households small, many residents, especially seniors, preferred to use the public toilet.

They often congregated in the area outside to chat or even eat dumplings Li made.

They nicknamed her “Xiaoli Hotline” because she would always found the time to listen to their troubles and concerns if they stopped to talk.

“The toilet was cleaner and much more beautiful, thanks to Li’s work,” said Li Yaoming, who has lived in the community for more than 30 years. “It makes me happy to see the beautiful flowers and plants in front.”

Li Ying said she regards the residents almost as her family.

“It is their happiness that makes me persist in this work,” she said.

The other cleaners were a bit dubious about Li’s methods because they seemed like hard work, but a campaign to clean up public toilets has meant that all sanitation workers today are learning from Li’s example. 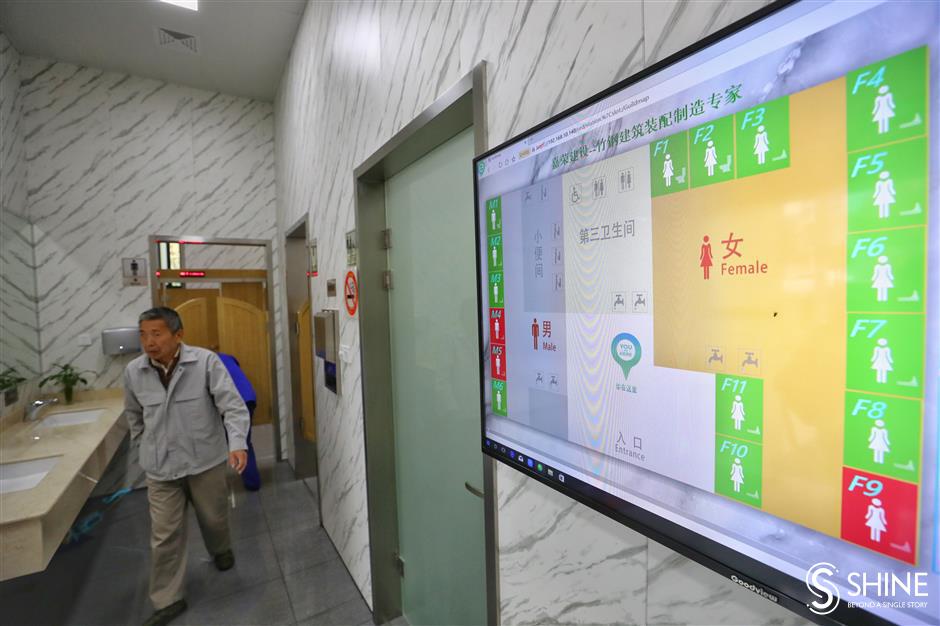 Li’s toilet on Hutai Road has become a model of cleanliness with air conditioning and mobile phone chargers.

Of the 43 toilets Li is now responsible for, 20 of them — including the one where she first worked — are being upgraded into smart public toilets. They must adhere to uniform standards, such as no dust, no odor and worker politeness.

Stepping into one on Hutai Road, users will smell nothing untoward. The new-look place has liquid crystal screens displaying whether a cubicle is in use or not. Air quality, the number of users and temperatures are all clocked.

There is a unisex toilet designed for parents with children and disabled people. A smart sensor regulates hot water taps. There is air conditioning, free toilet paper and mobile phone chargers.

“The toilets are beautiful and clean, sometimes even better than in five-star hotels,” said resident Tao Liping.

She said taxi drivers have left her standing by the side of the road when they saw her work uniform, and former classmates have made fun of her chosen occupation. However, the situation is changing for the better, she said.

“Now, I am proud of my work. I no longer feel ashamed to wear my uniform or to tell others what I do for a living,” she said.

“President Xi Jinping once said urban management should be as meticulous as embroidery. Cleaning is a bit like embroidering as well. You have to pay attention to every small detail to get everything right.” 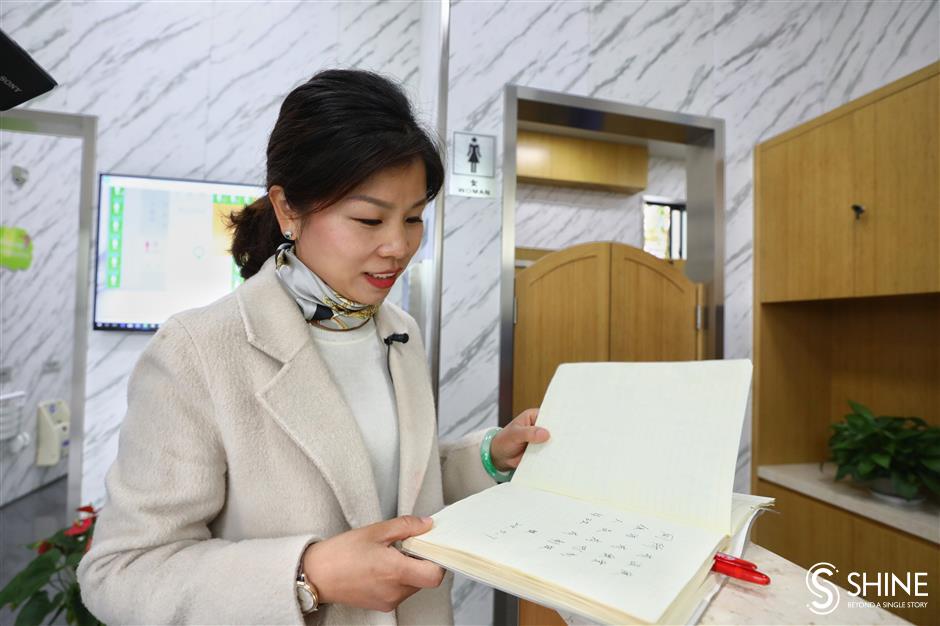