Doctor with somebody else's interests at heart 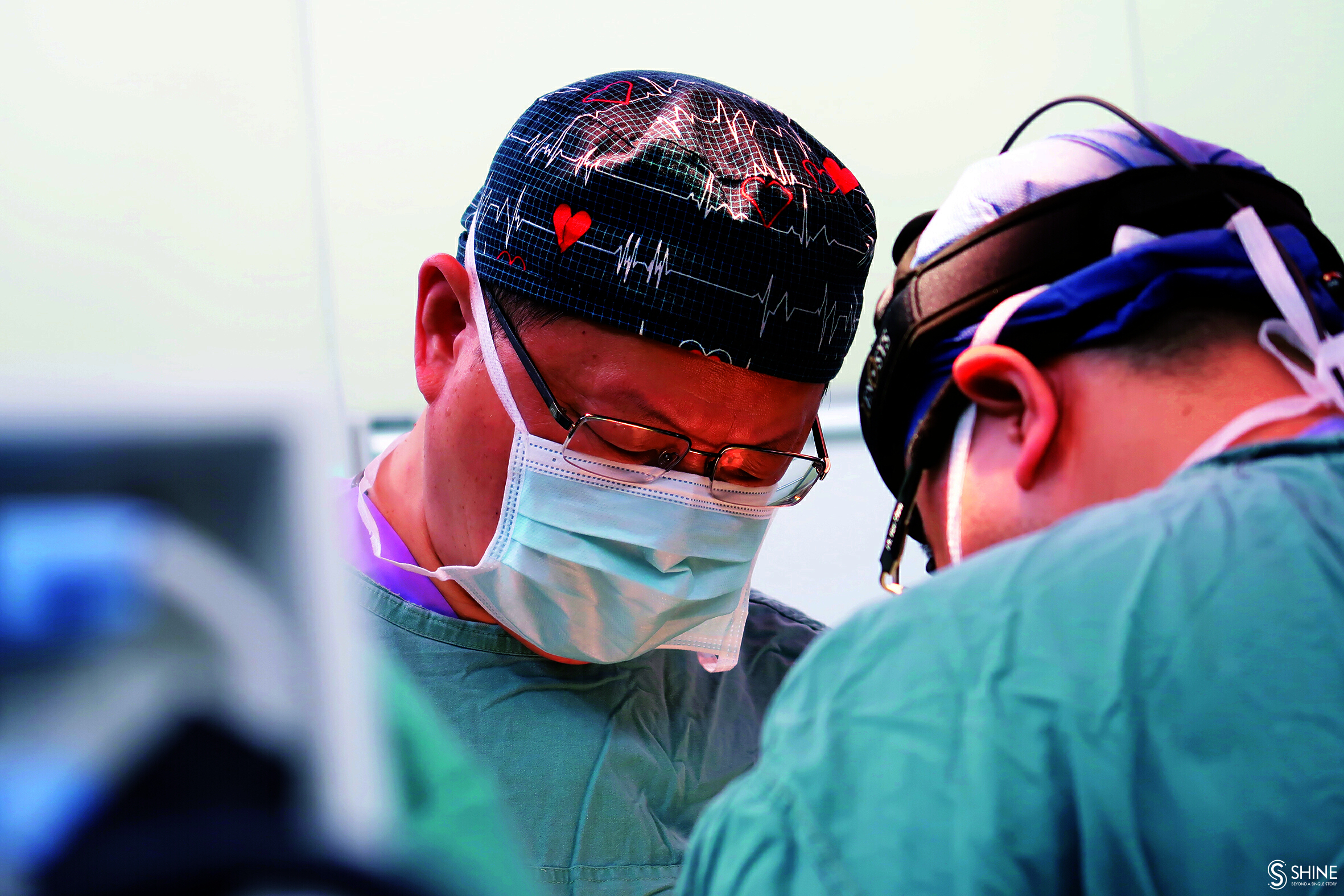 Dr Liu Jinfen has a big heart when it comes to small hearts.

The former president of the Shanghai Children’s Medical Center is considered one of the best pediatric cardiovascular surgeons in China. He has lost count of the number of children with congenital heart diseases who have gone on to enjoy healthy lives because of his care.

“I only remember the cases where we failed and children should have been saved,” said the 66-year-old specialist.

Under Liu’s leadership, the Children’s Medical Center has become one of the best and the largest facilities that treated childhood congenital heart disease. It performs up to 3,800 operations a year, the highest for any medical institution in the world.

Devotion to medicine runs in the family. Liu’s wife, mother and two uncles have been involved in the medical profession.

“I had a vague interest in medicine when I was young,” he said. “I can’t say that I thought about becoming a doctor. I just followed my destiny, and medicine became a career and a passion.”

Liu spent three years in the northeastern province of Heilongjiang during the “cultural revolution” (1966-76) as part of the campaign dispatching young urbanites to work on farms in remote, impoverished rural areas.

When the Shanghai Medical University announced a recruitment for new students, Liu grasped the opportunity and passed the examination.

As an intern, he was assigned to work in the pediatric surgery department of Xinhua Hospital, one of the leading pediatric hospitals in Shanghai.

When Dr Ding Wenxiang was named to establish the first pediatric cardiovascular department in China, he tapped Liu to work as a colleague. Congenital heart disease is the top congenital deformity in China.

“There was such a big gap between China and Western countries after the cultural revolution,” Liu said. “We were amazed to see Western achievements and worked hard to catch up.”

Liu was a quick learner, and within a year, he was leading surgeon on some operations.

In 1976, Liu was dispatched to the city of Tangshan in Hebei Province to assist the medical response following the devastating magnitude-7.6 earthquake.

“I stayed there for 10 months working in a local hospital, and my medical ability and experience improved quickly while there,” he said.

During the stay, Liu met his wife, a nurse with another medical team sent by Shanghai. They married in 1981.

His son hasn’t followed in his father’s footsteps.

“Being a doctor is hard work, with little time left for family,” the son explained. “When I was young, my father was always so busy and devoted to his work. He would often have to return to the hospital in the middle of the night because of some emergency.”

Liu Jinfen said he and his wife tried to encourage their son to study medicine but respected his decision to follow a different road. His son is now an associate professor of industrial design at Tongji University.

Lin Jinfen is one of the founders of the 20-year-old Shanghai Children’s Medical Center, which was built with the support of Xinhua Hospital. At first, the hospital operated as a branch of Xinhua, but later became independent.

When Liu moved his department into the new hospital in 1998, he was in charge of medical operations. He established outpatient services, surgery rooms and wards.

“It was hard at that time,” he said. “It was a totally new hospital, and I was needed everywhere for planning and decision-making. But I continued to see patients and perform surgeries, especially the complicated ones.”

Hospital management taught him a lot, but he was always a physician, not an administrator, at heart.

“I did apply the experience of hospital administration to clinical practice, and to the management of students, medical groups and patient-doctor relationships,” he said. “Good communication between colleagues and between patients and medical staff can truly influence the quality of medical care,” he said. 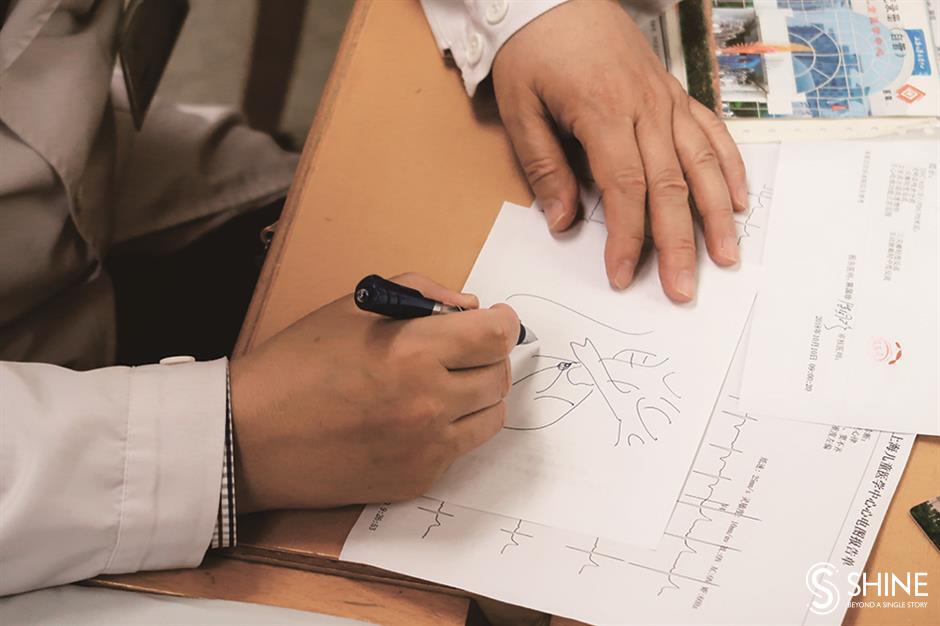 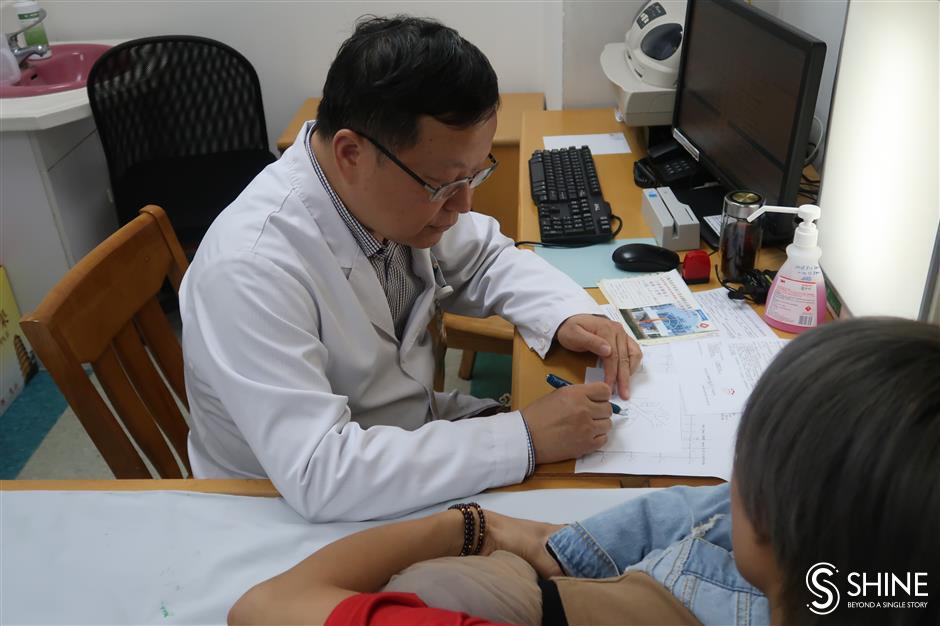 Liu believes communication with patients and their families is very important, so he uses drawings and graphics to help them understand and feel supported.

He still remembers the angry parent who seized him by the shirt and threatened him after a child didn’t survive surgery.

“My shirt was torn and all the buttons ripped off,” Liu said. “I’ve kept the shirt to remind me that we need better communications with families to give them more support and understanding.”

His motto: “To cure sometimes, to relieve often, to comfort always.” Easy to recite but sometimes difficult to follow, he admitted.

Liu said he learned cutting-edge technologies and their application from some of the top children’s hospitals in the Unites States.

“That was why I supported the establishment of a social worker department at the Children’s Medical Center, the first of its kind in Shanghai,” he said. “I saw the valuable role social workers played in many US hospitals. They stay with parents during surgeries on their children and come to check a patient’s condition periodically. They are a bridge between doctors and families.”

“He gives clear guidance and full support to his colleagues,” Ji said. “He never loses his temper, always remaining calm. He listens to people and their advice and suggestions. “Under Liu’s influence, the whole medical staff is dedicated to caring, devoted work. Every doctor and nurse are willing to take extra time and make extra effort. We also work with poor families who need charitable support.” 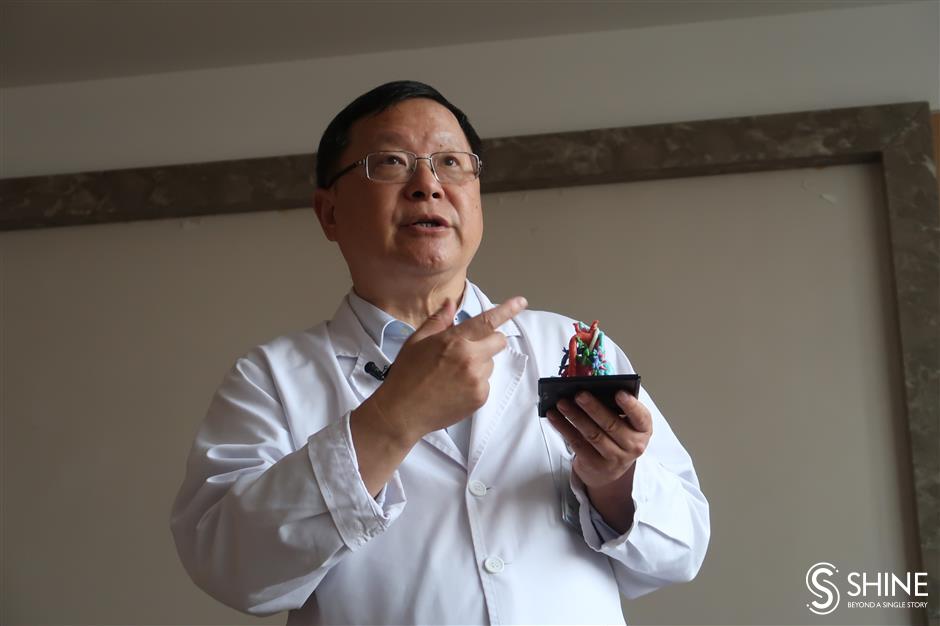 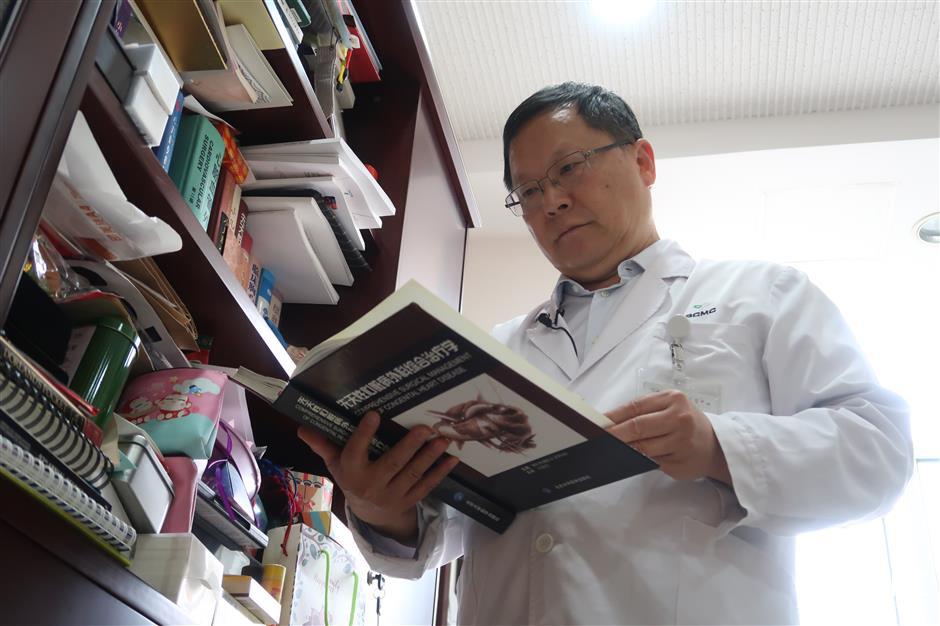 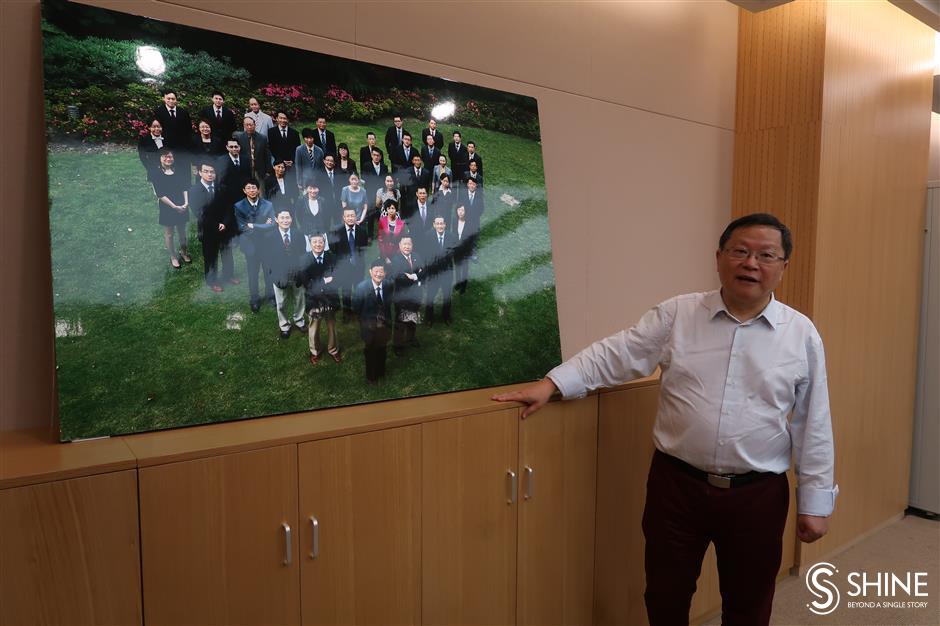 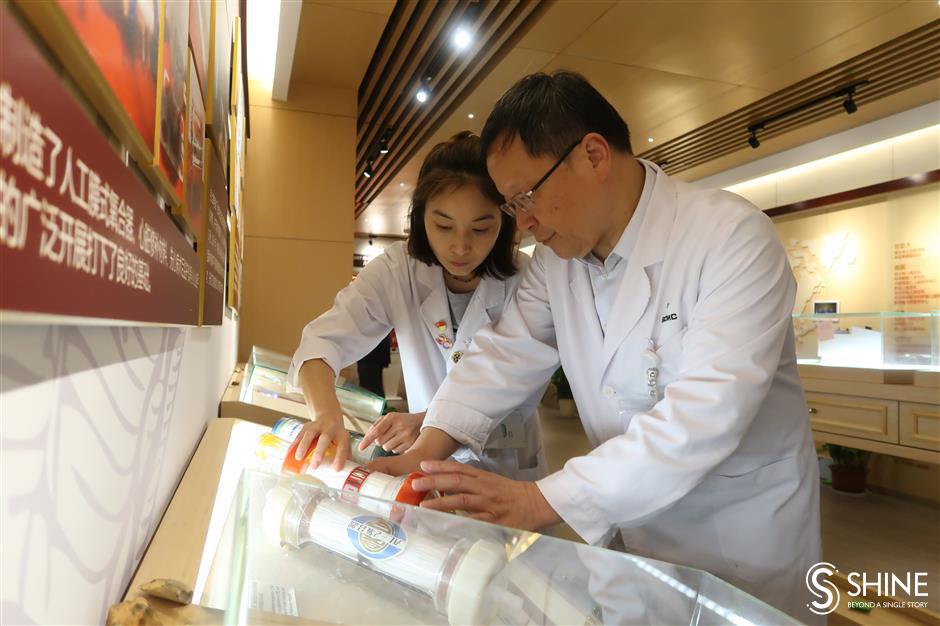 Liu retired as hospital president in 2012.

“Nowadays, I conduct two to three surgeries a week, teach students, do medical researches like the development of 3D printing technology in heart surgery, and work for several medical journals,” Liu said. “I share all my experience and knowledge with my students and colleagues. We are not just individual doctors, but rather a team.”

Liu insists on living near the hospital because he wants to be readily available to check on patients and help in case of emergencies.

“My biggest fear is receiving a phone call at midnight, telling me that a patient whom I operated on earlier in the day has developed complications,” he said. “I often go to the hospital after dinner to check up on the conditions of patients. I feel a strong responsibility for each one of them.”

He added, “There is no room for laziness or short-cuts in medicine. Every patient and every case require 100 percent of our attention and concern.”

Liu recalled one lesson he learned through his own negligence.

A pair of conjoined twins was surgically separated by Liu and his colleagues. One of the twins was found to have serious congenital heart disease and the boy underwent surgery a few years later.

“The boy didn’t survive the surgery because we missed a coronary deformity in his heart and found it only when we operated,” Liu said. “I should have ordered an angiograph before the surgery, but we didn’t because we wanted to spare the boy radiation and his poor family the extra medical costs. Had we done the angiograph, it would have revealed the deformity and we would have altered the surgery plan. I always share this case with our young colleagues and students.”

After 43 years as a doctor, Liu sums up what he has learned: “Revere life and respect science.”