A local hospital has developed guidelines for the screening of prostate cancer in order to achieve early detection and early treatment of the disease, local medical experts announced on Tuesday.

The team from Shanghai Cancer Center, a leading medical facility for cancer diagnosis and treatment in China, conducted a screening project on some 2,500 men in high risk groups from June last year. The incidence of prostate cancer was found to be 1.57 percent.

“The incidence of prostate cancer in big cities is four times that of small cities in China, because of people’s age, lifestyle and high health capability for cancer screening and detection," said Dr Ye Dingwei, who led the project. "In Shanghai, prostate cancer is the fifth most common male cancer and the top male cancer affecting the urinary system.”

The incidence of prostate cancer is actually 20 times higher in the West, but their mortality is much lower thanks to early and regular screening. Because over 80 percent of people affected in the United States are detected in early stages, the five-year survival rate is 99 percent. But that number drops to only 53.5 percent in China, as most patients are not detected with the disease until mid- or terminal stages.

“Effective screening is the best measure for early detection of prostate cancer, so we worked out a guideline to identify those of high risk, plus the frequency of screening and medical procedures for those detected with abnormal data during screening,” Ye said.

After research, Ye’s team identified that men over 50 years of age, those over 45 years old with a family history, and those over 40 years of age with high biomarkers for a prostate-specific antigen are most at risk. They set up screening spots in the neighborhood and cooperated with hospitals around the city and other provinces to promote screening, which is easily performed through a blood test.

“We targeted these three types of people for screening for more effective detection and better use of medical resources,” he added.

Ye’s team plan to screen 50,000 people in the project, which is being promoted nationwide. 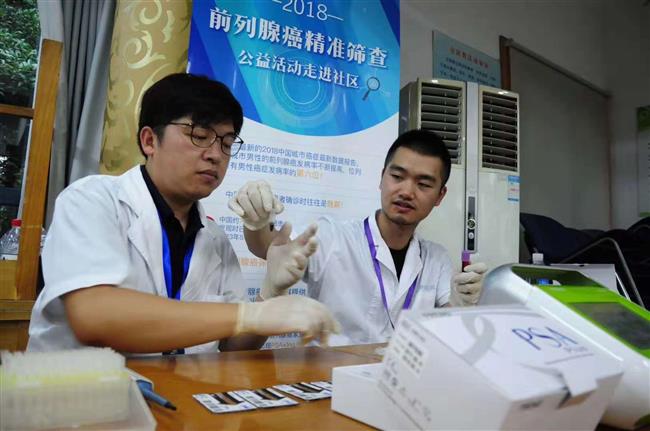 Doctors from Shanghai Cancer Center conduct screening for prostate cancer in a local neighborhood. The instant blood test on biomaker can know the results in minutes.