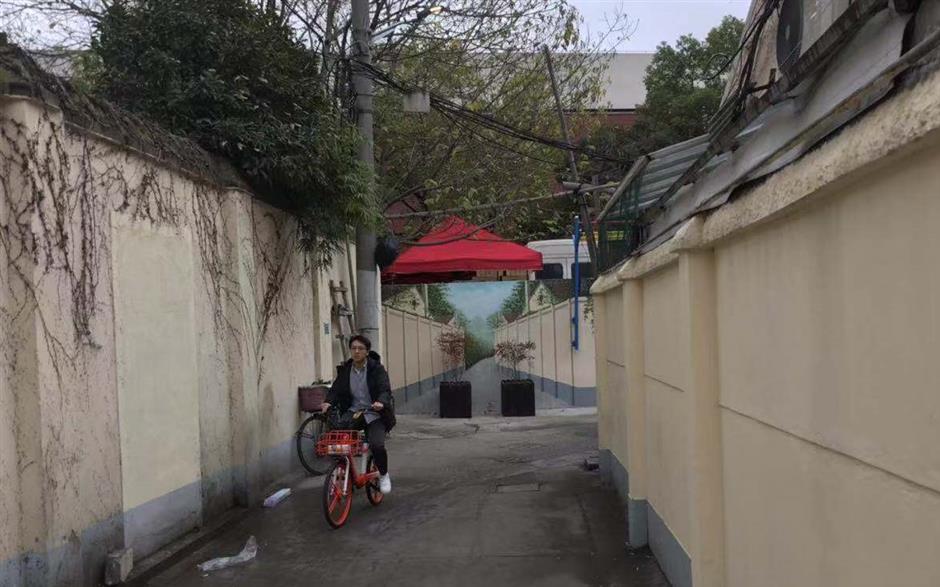 A cyclist passes the vivid 3D wall painting at a corner within a lane-style neighborhood at 285 Jiangsu Road. Several plants have been placed in front of the wall as safety reminds.

A mural that was brightening a corner of a lane at 285 Jiangsu Road has raised safety concerns because it is so lifelike.

The wall painting duplicates the surrounding scene, including a path, walls, greenery and houses and makes it look as if the path is continuing.

Some people complained that pedestrians or cyclists might crash into the wall thinking the painted path was real.

Wang Xiaojiang, 66, who has lived near the spot for more than 40 years, said it was the first time the wall had been painted and he thought it could mislead people, especially those not familiar with the area.

“I heard that some bike or moped riders had run into the wall, though I never saw such an accident with my own eyes,” he said. “I think it should be removed for safety reasons. It’s dangerous for deliverymen, who usually ride mopeds quickly.”

A woman surnamed Jin, who also lives nearby, said she loved the painting.

“The lane is old and the painting gives it a new look,” she said. “I don’t think it’s so cleverly painted that it would lead people to bash into the wall. When you get near the wall you can easily see it’s a painting.”

However, Jiangsu Road subdistrict has already responded to the concerns by placing plants in front of the wall to stop people going any further.

Yang, an office worker who walks past the wall every day between her office and Jiangsu Road Metro station, said, “I have never seen anybody run into the wall. And I think that the plants which were put here recently should be removed as they destroy the beauty of the painting.”

“It is a beautiful, interesting work of art, and I don’t think anybody would actually walk into the wall,” another resident said.

“In any case, most of the people who walk or cycle on the path are local residents who were quite familiar with it,” he added.

The subdistrict invited an artist to create the painting months ago after an illegal structure had been demolished.

“The painting was originally designed to expand pedestrians’ perceptions of the narrow path,” an official said.