Party on down in car-free Bund, Xintiandi this New Year's Eve

Folk arts, fun runs, food festivals and concerts are just some of the hoopla on offer to celebrate the upcoming New Year.

There will be music and dance at Laowaijie on Hongmei Road on December 30, while visitors to Fengjing on January 1 will be able to cut their own traditional window decorations and watch Chinese opera.

Energetic enthusiasts will ascend Oriental Pearl TV Tower in the Pudong New Area on the first day of the New Year, as climbing high is believed an auspicious start to the year.

At the skywalk in Jinmao Tower participants can watch the first sunrise of the year from the transparent corridor. A children’s concert will enliven Shanghai Tower.

An ice and snow festival at Shanghai Haichang Ocean Park features science exhibits and animal shows. Visitors will be able to learn how penguins lay and hatch their eggs.

At Jinshanzui Fishing Village there will be a magic show, acrobatic performances and fashion shows on December 31 and January 1.

A food festival will be held at Jinjiang Amusement Park, while crafts workshops, including music box making, and fairy tale shows will be offered at the Shanghai Fashion Center. 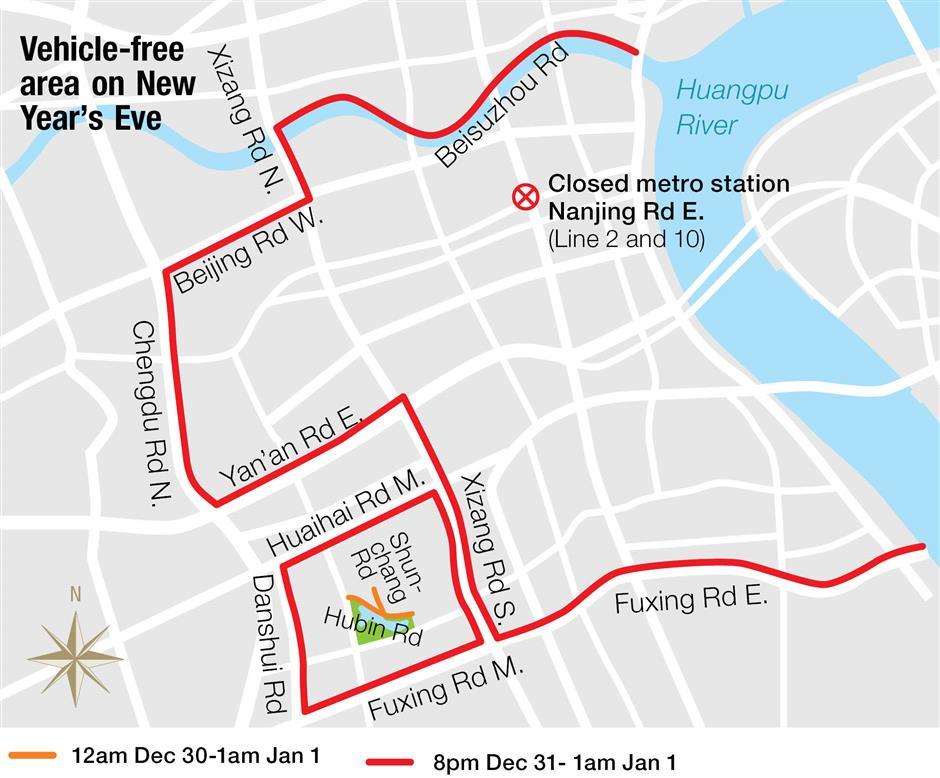 The Bund and Xintiandi will become pedestrian areas on New Year’s Eve with many streets closed for traffic on the final day of the year.

Vehicles will not be allowed on many roads near the Bund. The off-ramp at Jiangxi Road on Yan’an Elevated Road will be closed, but cars can go through the Bund Tunnel.

In the Xintiandi area, vehicles will have no access to Danshui Road, Fuxing Road M., Huaihai Road M. and Xizang Road S. and some others.

Shanghai Metro is laying on extra trains. Some 11 million passengers are expected on December 29, the last working day of the year, and demand will be even higher on Monday.

Trains will not stop at Nanjing Road E. Station on New Year’s Eve after 8pm. Exit 1 of Xintiandi Station will also be closed.

East Nanjing Road Station on Metro Line 2 and 10 will be closed on New Year’s Eve from 8pm. Exit 1 of Xintiandi Station of Line 10 and 13 will be closed at the same time.

The Dongjin ferry over the Huangpu River between Dongchang Road station and Jinlin Road E. station will also be shut, as will the Bund Sightseeing Tunnel.