Everything has changed except the smiling faces 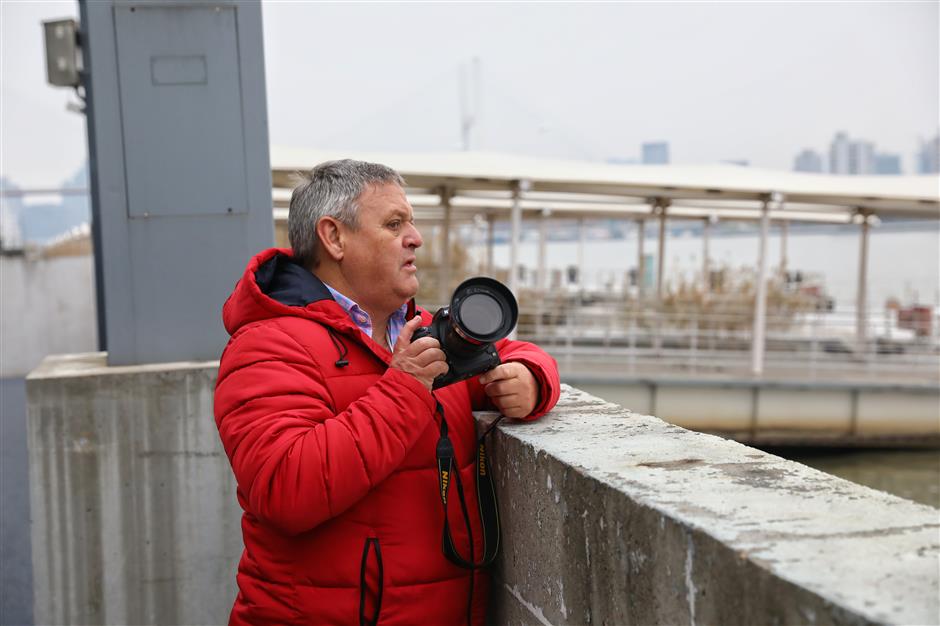 With better gear and grayer hair, Emery recaptures the city he first snapped 39 years ago.

It was a fresh-faced and youthful Mike Emery who stepped of a cruise ship in Shanghai in the spring of 1980.

Aged 23 at the time, he was one of the first foreigners to see inside China as the country embarked on its voyage across a vast ocean of reform and opening-up.

Emery was a professional photographer. It was his first trip on the cruise liner and his principal task was to preserve the memories of passengers on their once-in-a-lifetime voyages of discovery. He stayed only a few days in Shanghai, but during his brief sojourn he wandered the streets, unashamedly freezing in time the lives of local people, which he published last year in his book “China’s Children.”

Time passed and after four years at sea, setting foot on every continent, Emery settled down and found himself walking the streets of Sydney, Australia, still snapping, as a real estate photographer.

And now he’s back, almost 40 years on, finding the places he recorded way back then, and looking for the “children” who must be grandparents by now.

“A comparison of images between 1980 and 2019 is going to be a fascinating, and I hope a thoughtful, project that in some small way will contribute to the 70-year celebrations of the People’s Republic of China,” Emery wrote in his blog before his journey. 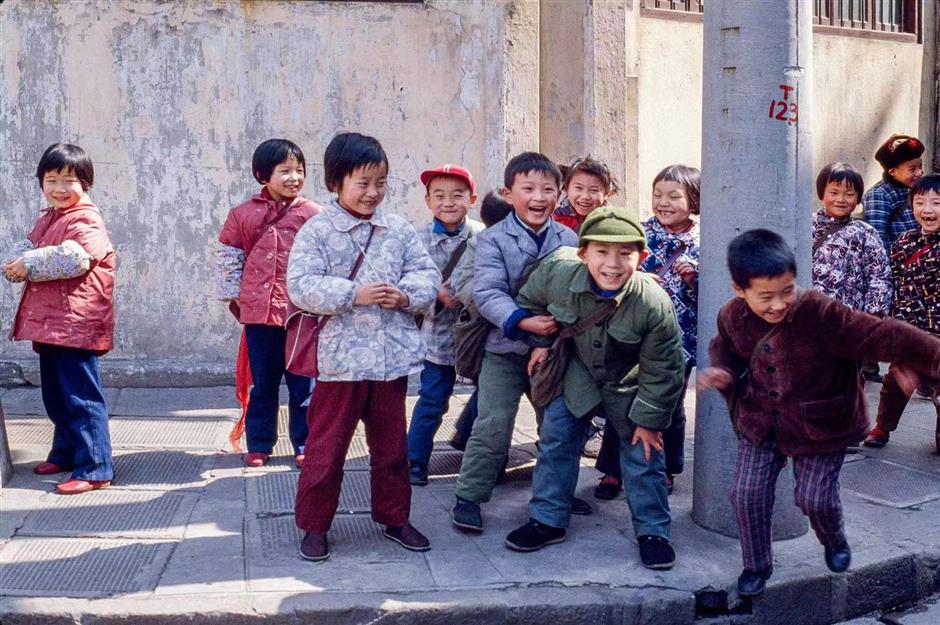 A bunch of kids on their way to school in 1980. The photo was probably taken around the junction of Qingpu and Daming roads in Hongkou District. The children’s colors were in stark contrast to the drab Mao suits of the adults at the time.

The task has proved way harder than he thought. Shanghai has undergone tremendous changes. Many of the scenes in Emery’s photos were old residential warrens which are now greenbelts, broad streets and skyscrapers.

When MV Aquamarine cruised into Waihongqiao Port in 1980, now Shanghai Port International Cruise Terminal, Emery’s lens focused on what was to become the Pudong New Area and snapped green fields and nascent urban sprawl. Yesterday, at the top of the Oriental Pearl TV Tower in Lujiazui CBD, he looked down and was blown away by the dramatic changes laid out beneath him.

“I never thought it would have changed so much,” he said.

His first day of regression began at Waibaidu Bridge, part of the skyline of the Bund since 1908 and one of the few sites that hasn’t changed much. In one of his photos, a young man with a broad smile plastered across his face roller skates across the bridge. People stare on, bemused with curiosity. He was the hairdresser on the liner.

“A white man on roller skates was quite a rare sight at that time,” said Emery, deadpan.

Sometimes as many as 50 people would cluster around the outlanders. Occasionally someone would even know two or three words of English.

Now, having not clapped eyes on Shanghai for 39 years, Emery truly understands how those people felt when they looked into his camera. Today, for him, everything is new. 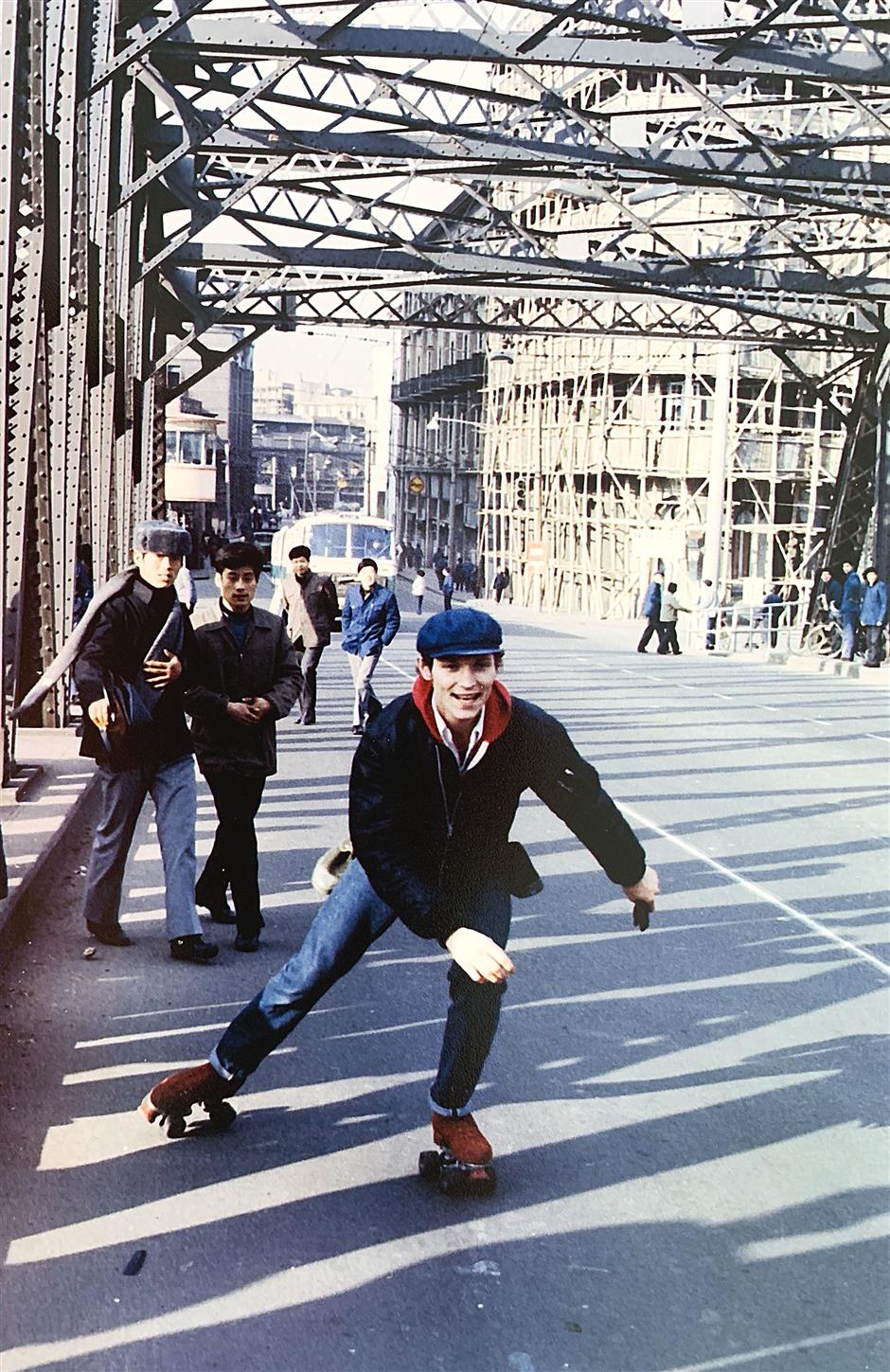 Youthfully optimism smeared all over his face, one of Emery’s shipmates roller skates across Waibaidu Bridge in 1980. The building under renovation in the background is the Astor House Hotel, now the China Securities Museum.

Yesterday, Emery and a Shanghai Daily reporter tried to retrace the steps of that exited young man. “I’m just as excited now as I was 39 years ago,” said Emery when he found the exact same angle on Nanjing Road E. where he took a photo of the traffic. “At that time I didn’t think much of it, I just pressed the shutter.”

Years go by. The young blond lad is a grey haired man. Every year Emery would look at the photos and wonder what to do with them. Of all the countries he visited those years ago, none stood out like China.

“It took me years to realize that I was here at such a special moment when change was about to come,” Emery said. “I wanted to compare the photos of the same locations, but in different times, to see how it has changed — the city and its people.”

In one of his photos, a group of children on their way to school laugh and make faces at the camera. The children dressed in their bright colors were in huge contrast to the adults then, most of whom still wore Mao suits in blue or khaki.

The photo begs so many questions. Where did they all go? What did they accomplish, this generation, who stood at the very beginning of the national adventure, smiling and laughing with no idea at all how the future was about to open up before them? Where are they now? How has modern dentistry changed their lives? 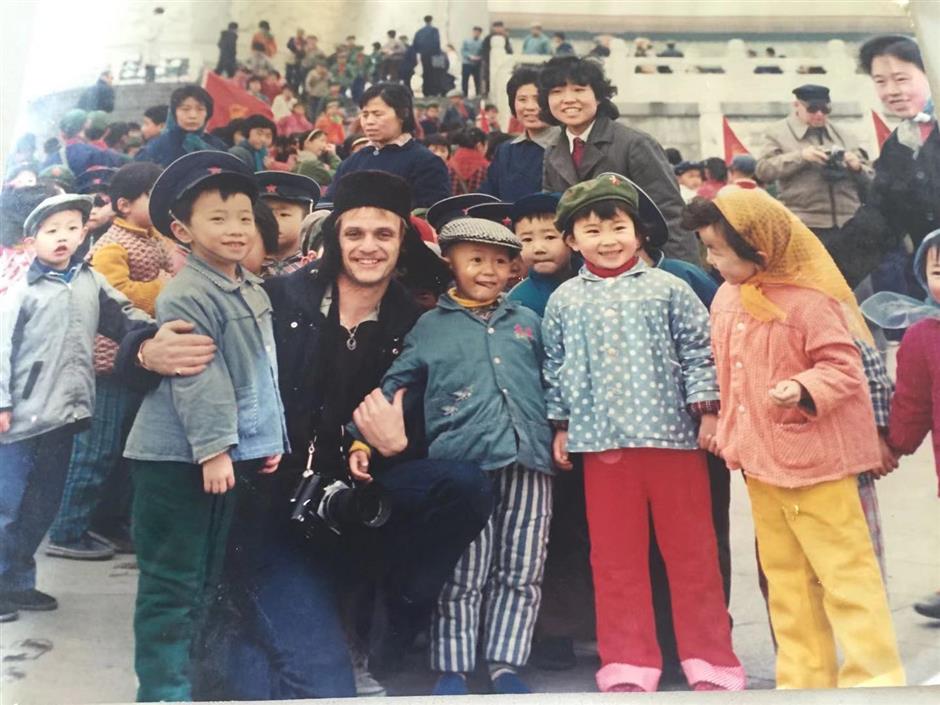 Mike Emery and kids at the Tian'anmen Square in Beijing in 1980.

All these kids are now in their 40s or 50s, but in a city of 24 million, they are just so many tiny needles in giant haystacks, but they are, for sure, someone’s mother, someone’s father: wives, grandparents, doctors, lawyers, street sweepers, political advisors, billionaires and paupers.

Despite finding no trace of the kids in the pic, Emery found plenty more children, with the same big bright smiles, pulling faces, the same rosy cheeks. Some things never change.

“What impressed me the most in the city of Shanghai is not how the Lujiazui CBD sprung up so fast, nor the better quality of life,” Emery said. “It’s the simplicity on people’s faces that hasn’t changed a bit.”

Emery has gone on to Beijing today; after that, back to Sydney and an exhibition on how much, and how little, things have changed. One day perhaps, he will exhibit here in Shanghai. The past, he said, is the best education for the future.