Pudong will comprehensively enhance the competitiveness of scientific and technological innovation.

It will attract a large number of top scientists, research institutes, R&D centers and innovation platforms home and abroad and give full play to the coordinative advantages of Zhangjiang’s R&D and Lingang’s industrialization and promote the localization of major scientific and technological achievements.

Pudong will comprehensively enhance the competitiveness in global resources allocation.

It will promote price signals, such as crude oil futures and "Shanghai Gold Benchmark Price" to become signposts of global resource allocation.

Moreover, Pudong will enhance the global shipping service capability and consolidate and promote its status as an international air-sea hub by accelerating the construction of the follow-up phase of Yangshan Deep-Water Port and Pudong International Airport.

It will also accelerate the agglomeration of high-end elements of shipping services and introduce a number of international and national leading shipping enterprises and functional institutions with strong competitiveness and build a number of trade platforms with transactions to exceed 100 billion yuan (US$14.56 billion).

In the past 28 years Pudong has set itself up as a reformer and pioneer on a global scale.

Pudong has also promoted “Shanghai brands” in the service, manufacturing, shopping and cultural sectors during the period of reform and opening up. And the waterfront space, which stretches 22 kilometers along the east bank of Huangpu River, is an ideal setting for Pudong to boost its cultural development.

Industrial heritage sites have taken on a new look after renovation and houses some of the most cutting-edge fashion brands in the world with some of the sharpest minds. That is why the east bank is being built into a cultural cluster.

One project by the Pudong New Area administrators saw the Shanghai Coal Terminal transformed into a contemporary art museum. More than 350,000 visitors a year have walked through its doors since its opening.

The MIFA 1862, a converted 157-year-old shipyard on Binjiang Avenue, is now an artsy commercial space which plays host to performances and exhibitions.

The Minsheng Wharf complex debuted in the 2017 Shanghai Urban Space Art Season. Nearly 200 architects, artists and curators from all over the world gathered to brainstorm the idea of “sharing future public space.”

Pudong plans to turn itself into a major site for brand building, with Shanghai Service, Made in Shanghai, Shanghai Shopping and Shanghai Culture leading the way.

In Pudong officials’ opinion, the promotion of an intelligent automobile industry and a major site for the development of the “four brands of Shanghai” are a perfect fit. Today, both local enterprises and the new area have reached a new starting point. 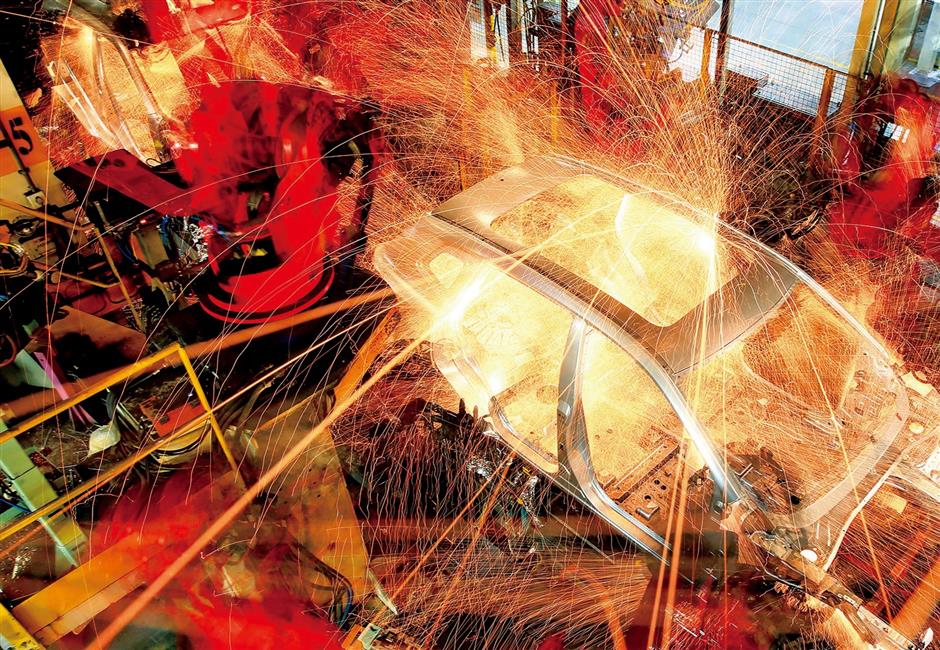 High-end manufacturing is another cutting-edge advantage in Pudong.

In Lingang, 240,000 vehicles and 400,000 engines roll off the assembly line at the automated workshop of SAIC’s manufacturing base every year.

Rower RX5, the world’s first Internet car, was born there and has become one of the world’s bestsellers.

From land to the air, the second C919 jet liner developed by Chinese aerospace manufacturer COMAC has completed its maiden flight.

The jumbo jet project sees China’s manufacturing industry standing at the top of the global labor division for the first time.

From air to the sea, at Phase IV of the Shanghai Yangshan Deep-Water Port, bridge cranes and automated guided vehicles are in charge of the loading and transport of containers.

The world’s biggest automated container terminal and machinery “nervous system” are all made by Shanghai Zhenhua Heavy Industries Company, which is seeking cooperation with Maersk, an international shipping giant, to develop global standards for fully automated terminals.

To match the highest and best standards in the world and seize the middle and high-end of the global industrial value chain, “Made in Pudong” will become synonymous with high-end manufacturing. 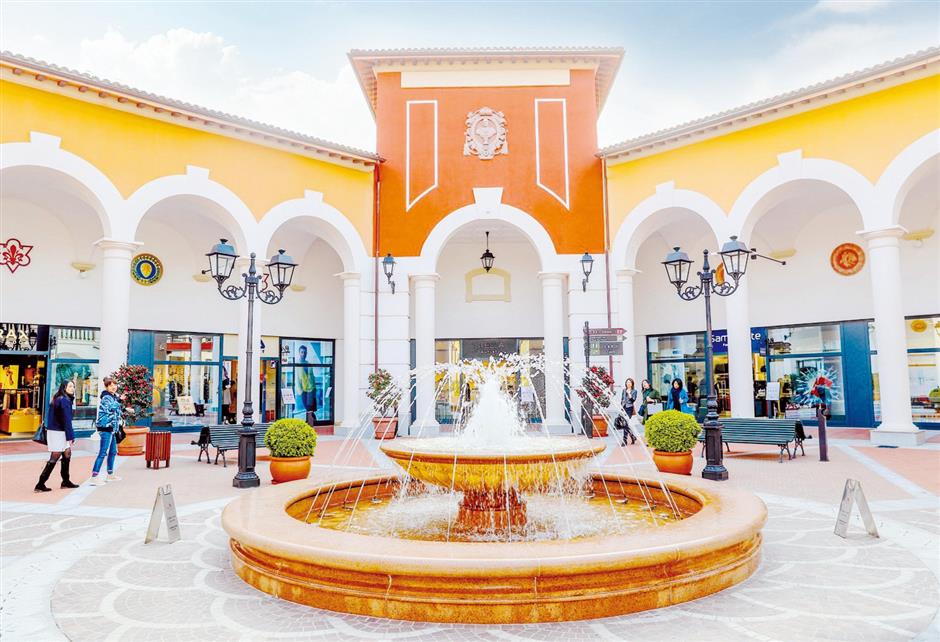 A shopping mall in Pudong

From countryside to the development zone and from the pilot zone of comprehensive reform to the pilot free trade zone, Pudong has become an icon of China’s modernization process.

Value Retail Shanghai Village, next door to the Shanghai Disneyland, houses more than 100 boutique stores featuring fashion brands from around the world.

In the IFC Mall in Lujiazui, the century-old French shoemaker Berluti store looks like an art hall. Each pair of the haute couture shoes is sold for more than 10,000 yuan (US$1,456).

In the IFC Mall, the basement is where haute couture products are available and the floors above house stores of other prestigious brands. Almost every influential brand has opened a store in the IFC Mall. Lujiazui is a landmark of luxury retail.

To optimize a business environment has always been a mission of Pudong’s leadership.

The China (Shanghai) Pilot Free Trade Zone has generated 127 institutional innovations replicated throughout the country since it was established in September 2013.

Pudong is well aware that reform is by no means a single innovation. Because single reform is easy to replicate, only innovation based on multiple integration can create exclusive advantages.

At present, a unified approval system offers enterprises online processing from declaration to pre-examination, acceptance, review, decision-making and the issuance of certification.

All the 104 administrative examination and approval items have been included in the unified online approval system, while 74 of them can be dealt with online and applicants for the rest are only required to visit the counter once after they submit materials online.

On the opposite of Pudong New Area government building is the Public Service Center of Shanghai. It offers a one-stop solution for local citizens and businesses to handle administrative affairs.

Additionally, an “everybody finding fault” counter was established to improve government service.

Taking the opportunity to build the “four brands of Shanghai,” Pudong is constantly creating new strategic advantages, opening up new development spaces, and seeking greater competitive advantage in the next 10 to 20 years and achieving an irreplaceable “Pudong brand.”

Shanghai’s ambition to be a global innovation and science hub took a giant step when establishing the Zhangjiang Lab.

Co-built by the Shanghai government and the Chinese Academy of Sciences, the lab is in the northwest of Zhangjiang and works as a base for scientific innovation, functional research and development for interdisciplinary collaboration and innovation. It is also a network for collaboration linking research with the industrial chain. Covering an area of 5.29 square kilometers, the national lab will initiate and coordinate large-scale international research studies and national key projects.

It will feature a world-leading photonic science center and the core area of scientific and technological creation. The surrounding areas are home to universities, national-level research institutes, world-class research and development facilities and scientific instruments.

The instruments are major components of the infrastructure being developed for the national science center, such as the Shanghai Synchrotron Radiation Facility and the world’s first comprehensive protein research faculty.

“In the beginning of the lab’s development, we will focus on building major scientific facilities to make breakthroughs in fundamental sciences,” said Wang Xi, director of the lab, who is also the head of Shanghai Advanced Research Institute, which is part of the academy, “particularly on photonics (the physical science of light), life science, information technology and brain-inspired intelligence technologies, an interdisciplinary between life science and information technology.”

Several national-level science facilities in Zhangjiang will be integrated into the institute to make the lab better serve the science community.

A target has been set to make it a world-class national laboratory by 2030. It will solve a number of strategic core technological problems urgently needed by China and provide strong support to build Shanghai into a center of technological innovation with global influence and the country into a scientific and technological power on the 100th anniversary of the founding of the People’s Republic of China.