Master devoted to 'the king of coating oils'

In 2002, Yuan Rongfu lost his right leg in a car accident, just when a lacquer factory he was building was still under construction.

His family advised him to give up the project, but he was determined to persist.

“I knew if I gave up, then the lacquer chain in eastern China would be broken,” he said. “In order to pass it down, I had to keep the industry going.”

Some 26 days after surgery on his leg, Yuan arrived at the construction site of the new factory in a wheelchair pushed by his wife.

Yuan is one of the best lacquer masters in Shanghai. He has deep knowledge of the process of making the hard, durable, waterproof finish used in China for thousands of years.

The finish is typically coated on wood,but Yuan paints it on the hard surface of 11 layers of linen. A table made with the process takes two years to complete.

“Because I like to do things in unique ways,” he explained. “It’s the original way lacquer was applied in ancient times, according to books.”

Lacquer is made from the sap of lacquer trees. When exposed to oxygen and humidity, it hardens and becomes a natural plastic. Then it is stirred, heated and filtered through silk.

Raw lacquer can cause allergies, but experienced workers like Yuan have developed an antibody due to long exposure.

“I can put it in my mouth and experience no problems,” said Yuan, “but for children who come to my lessons, I always handle the materials to ensure that they are not directly exposed to lacquer.” 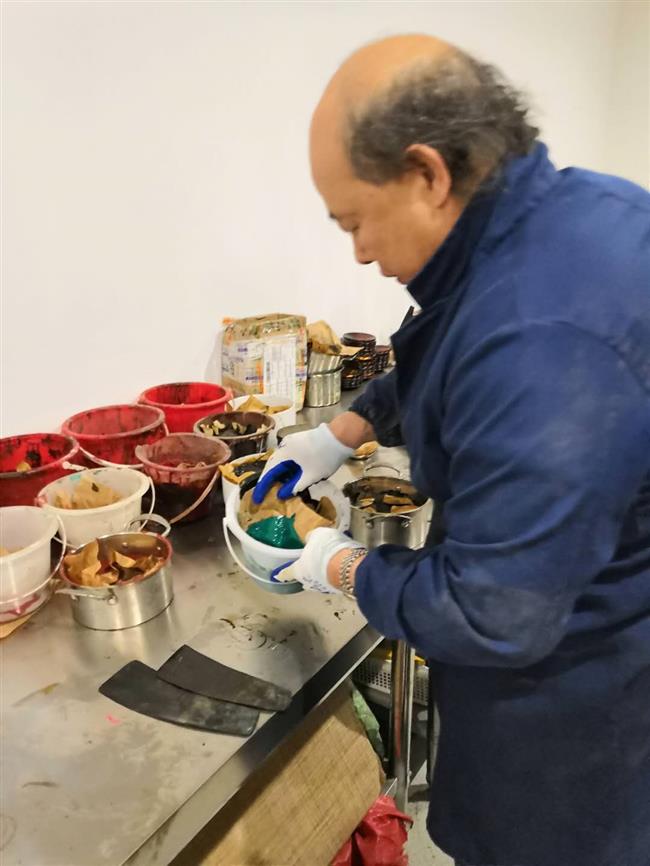 Lacquer can be mixed with color pigments, particularly cinnabar that was used in artworks produced for royalty. Yuan started to learn his skills at the Shanghai Lacquerware Factory in 1981.

“I’m a person who loves to get to the bottom of things,” he said of his education. “I really put my heart into what I learned. While other students played cards, I was studying. When I returned to my room, I was always thinking about lacquer.”

In the 1980s, he competed with foreign companies on a project, undercutting the opposition’s price of USS$70 a square meter with a bid of 30 yuan (US$ 4.29) a square meter, a five-year maintenance guarantee included.

“At the time, people thought imported product were always better,” he said. “But that just wasn’t true.”

After decades of experience, Yuan is a lacquer master. He understands how different levels of humidity and temperature affect the performance of lacquer. Artists have to adapt their work to weather conditions. Even lacquer trees grown in different places can produce different oils.

“Trees grown on mountaintops that get a lot of sunshine and rain produce the best oil,” Yuan said. “Oils from trees that don’t receive much sunshine have limited uses.”

He has mastered techniques to modify lacquer to bend to his needs. He can even judge the stickiness and quality of lacquer just with his eyes.

“Since I founded my factory in 1999, I have never received any complaints,” he said. “Not even one. And my price is lower than that of state-owned factories. Even after I lost my leg, I didn’t need to go out and find clients. They come to me.”

Lacquer is often called “the king of coating oils” because of it is eco-friendly, cheap and long-lasting.

Writing books about lacquer to promote its use in China is on Yuan’s to-do list. 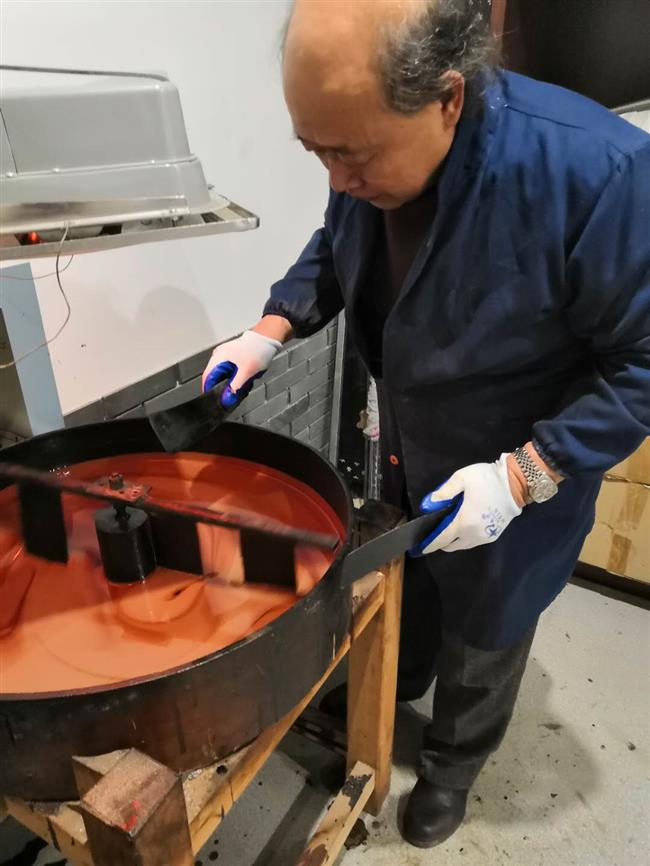 The technique of coating hard surfaces with lacquer was first developed in the Shang Dynasty(1600-1046 BC) and grew sophistication over time. Pieces of lacquerware were discovered dating back to Neolithic period. The earliest existing lacquerware is a red wooden bowl unearthed at the Hemudu (7000-5000 BC) culture site in Zhejiang Province.

The artistic handcraft continued to develop during the Han, Tang and Song dynasties. It was applied on furniture, plates, coffins and musical instruments.

Because lacquer was very thin, some items needed hundreds of layers. The process was expensive and time consuming. In the Tang Dynasty, a new technique was developed whereby a wooden object was given repeated layers of lacquer until it was thick enough for sculpture or carving.

Gradually, other art forms, such as lacquer painting, were developed. Lacquer coating and decoration were introduced into Japan, Korea and other countries. Lacquerware became a highly popular