Cherries have blossomed at Shanghai Botanical Garden in Xuhui District, nearly one month earlier than the average, and the earliest for about 20 years.

"The warm and mild weather this winter, plus abundant rainfall, is the reason for the early flowering," said Ge Weijia, a gardening engineer at the garden.

When the temperature reaches above 5 degrees Celsius and lasts about 10 days, early blooming cherry varieties will wake up and flower, she said.

The earliest cherry blossom flowered at the garden as early as late-January.

Some bellflower cherries, one of the earliest blooming and the major cherry blossom in Shanghai, also flowered during the Spring Festival holiday.

The cherry, native to Taiwan, Fujian and Guangdong, features large petals and a variety of colors such as red, white and pink. It usually flowers in late February or early March.

The quality of cherry blossom is not affected by the timing of flowering, garden experts said.

"If the weather conditions continue, the flowering time of other cherry species will also be advanced by one to two weeks," Ge said.

The Kawazu-zakura cherry blossom, one of the earliest blooming and another popular cherry blossom in Shanghai, is expected to flower in late February. The cherry is bright pink in color.

The Chenshan Botanical Garden has a 550-meter boulevard of the flower, creating a dream-like pink tunnel. It is known as the most beautiful Kawazu-zakura cherry blossom boulevard in Shanghai.

Unlike other cherry blossoms which have short blooming times, the flowering time of Kawazu-zakura can last about a month.

The appreciation time of cherry blossoms lasts till late April, depending on varieties in the city. Luxun Park, Zhongshan Park, Tongji University and Gucun Park, where a cherry blossom festival is held every year, are other good spots to appreciate the flower. 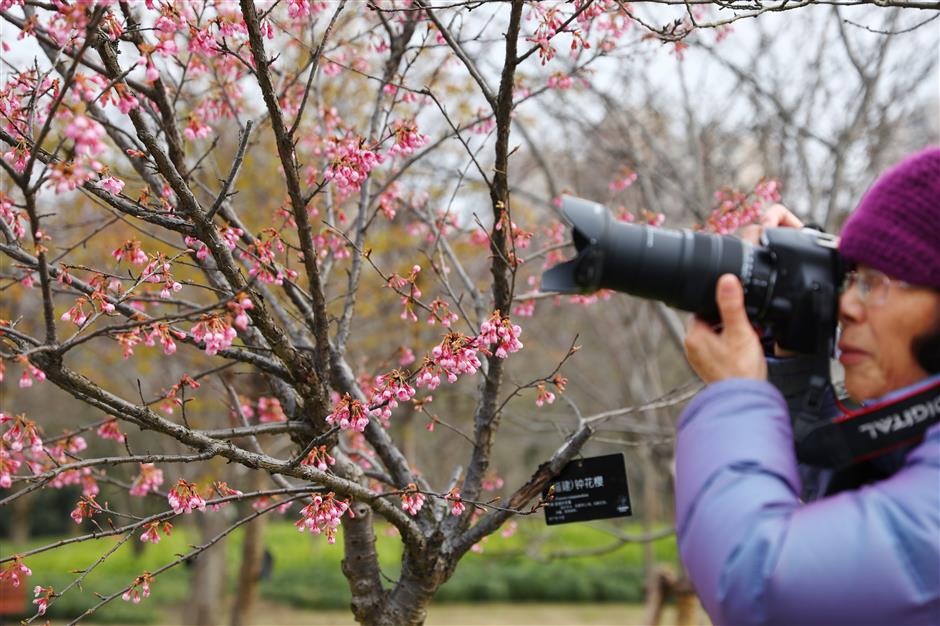