It's back to school after long, festive break

Shanghai students returned to school on Wednesday after the winter vacation that lasted nearly one month and covered the Spring Festival and Lantern Festival.

As the Lantern Festival fell on Tuesday, some schools continued celebrating the traditional Chinese feast on campus, as a way to promote traditional culture and officially end the holiday.

Students at Minhang Experimental Primary School, many of whom dressed up in traditional Chinese costumes, carried hand-made lanterns to decorate the campus and their classrooms.

The principals and teachers all wore red scarves and greeted students at the gates, despite the rain and chill. Later in the morning, they also visited classrooms one by one to give out glutinous rice balls, known as tangyuan in Chinese, to students.

“We have more than 6,000 students on four campuses and our chefs had to start working early to prepare the glutinous rice balls,” said He Xuefeng, principal of the school.

As last year was the 40th anniversary of China’s reform and opening-up policy, while this year will celebrate the 70th anniversary of the founding of the People’s Republic of China, students were also asked to do research on these topics during the winter vacation.

Gu Minghuan, a fourth grader, said he took a six-hour flight to return to his mother’s hometown in the Xinjiang Uygur Autonomous Region.

“My mother was born in 1978, when reform and opening-up was initiated, and she told me that it took her several days to travel to Shanghai by train when she was young,” he said. “I think the past 40 or 70 years are very short in China’s 5,000-year-long history, but the development is very fast.”

Gu also created a poem to address the topic and shared it with his classmates.

Students return to Minhang Experimental Primary School on Wednesday with lanterns in hand. 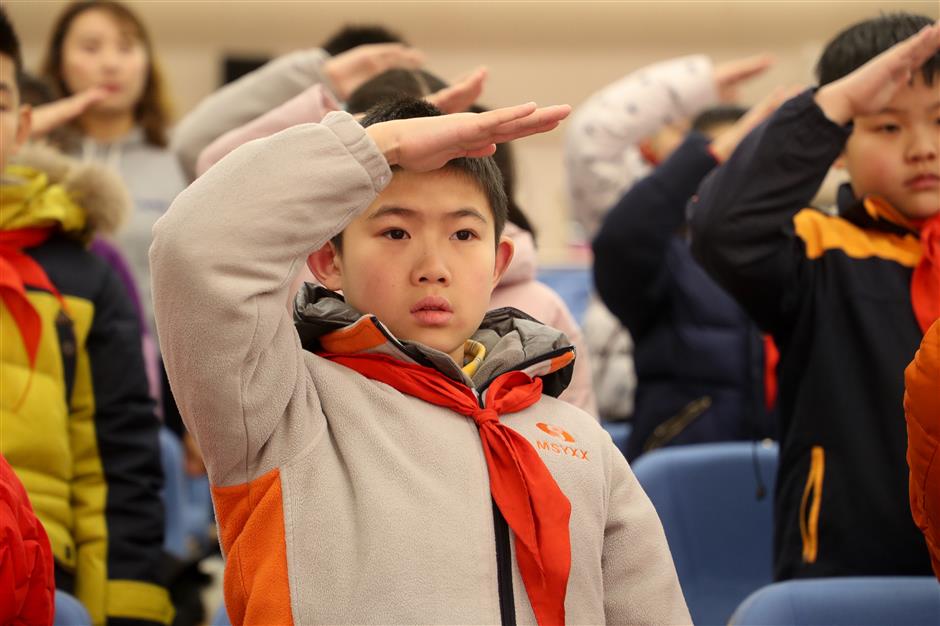 Students at Minhang Experimental Primary School attend a ceremony on Wednesday to kick off study for the new semester. 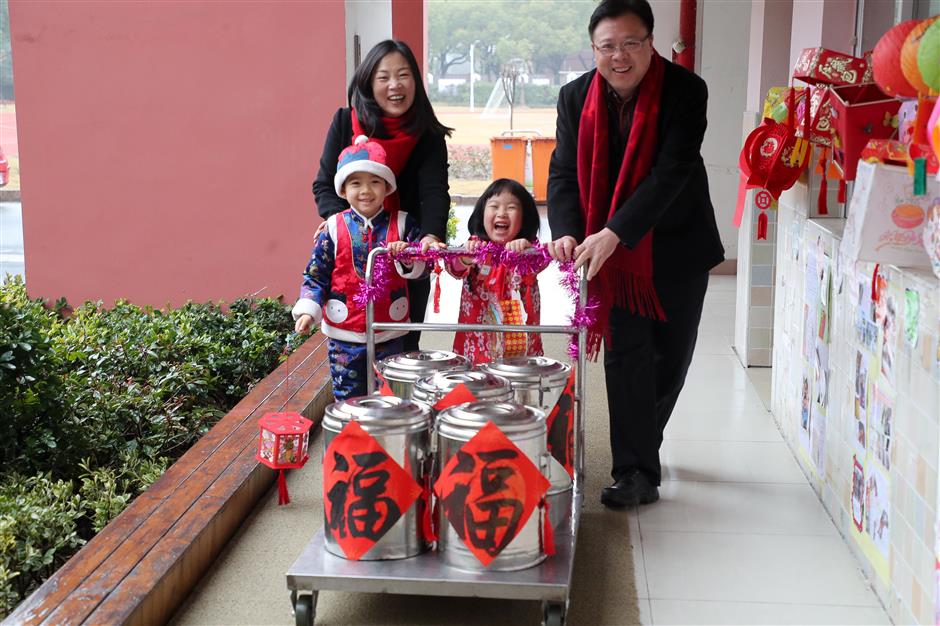 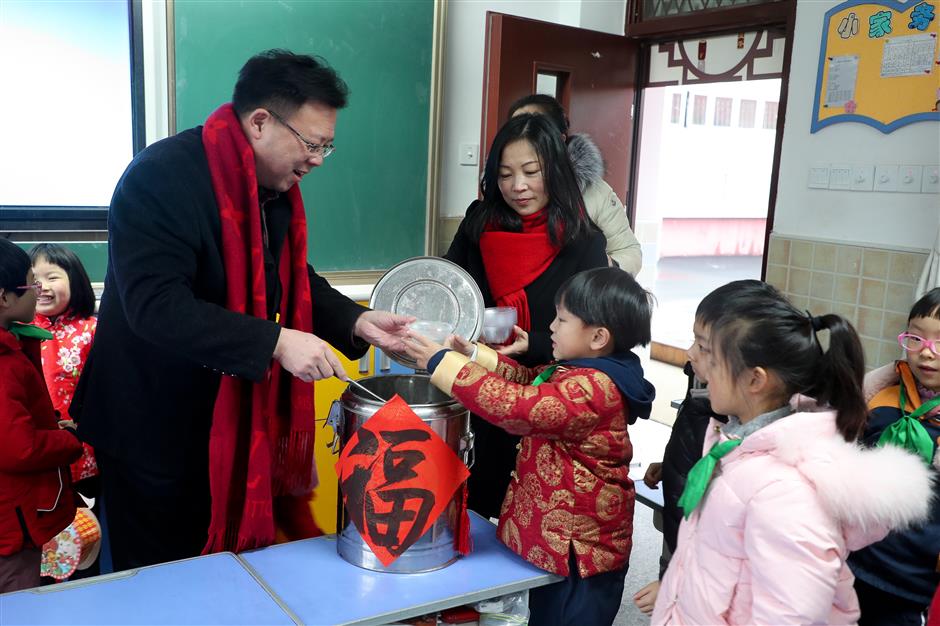 He Xuefeng (left), principal of Minhang Experimental Primary School, and Fan Xianghua, head of its campus on Wanding Road, give out glutinous rice balls to pupils.

Shanghai traffic police said 2,500 traffic police officers and their assistants safeguarded over 400 primary and middle schools and kindergartens on the first day of the new semester.

To streamline traffic around schools which has been increasingly weighed down as more and more parents drive their children to and from school, police have taken measures in cooperation with communities.

In Minhang District, parents of children at Jinhui Experimental School on Hongsong Road have benefited from the new measures.

This school has about 1,200 students, one in five of whom are from overseas, and as its gate is located on a small two-lane street with a large residential complex across the street, heavy congestion used to happen at peak hours.

“Sometimes the cars heading in both directions formed four lanes, and residents complained that they couldn’t get home after work,” said Ye Ting, a police officer who worked in the area.

Ye actively sought a solution to the problem at the end of last year, together with the neighborhood committee of the residential complex, which resulted in greatly improved traffic flows on the street.

Now in peak hours, the street allows only one-way traffic from north to south, and residents of the residential complex are advised not to take the narrow street to and from work in peak hours and instead take a detour via another street.

Qin Zhenyu, a father whose daughter is a third grader at the school, said the measure has made his trip easier.

“Previously cars often got stuck on this street head to head, and now the traffic is very smooth and efficient,” he said.

Security education has become a tradition for local schools to kick off a new semester for years.

Joined by the Emergency Management Bureau, Shanghai Public Security Bureau and Shanghai Education Commission introduced an hourlong TV program of public security education to the city’s students on the first day of the new semester starting from last year.

The program, which was aired on TV, the Internet and in buses and Metro trains, taught children what to do if assaulted by bad people in an elevator, how to avoid being run over by a large truck when it’s making a turn, what to do if a fire escape is blocked and how to stay safe in bad weather.

The program was shot at the public safety education and training center at Shanghai Oriental Green Land. 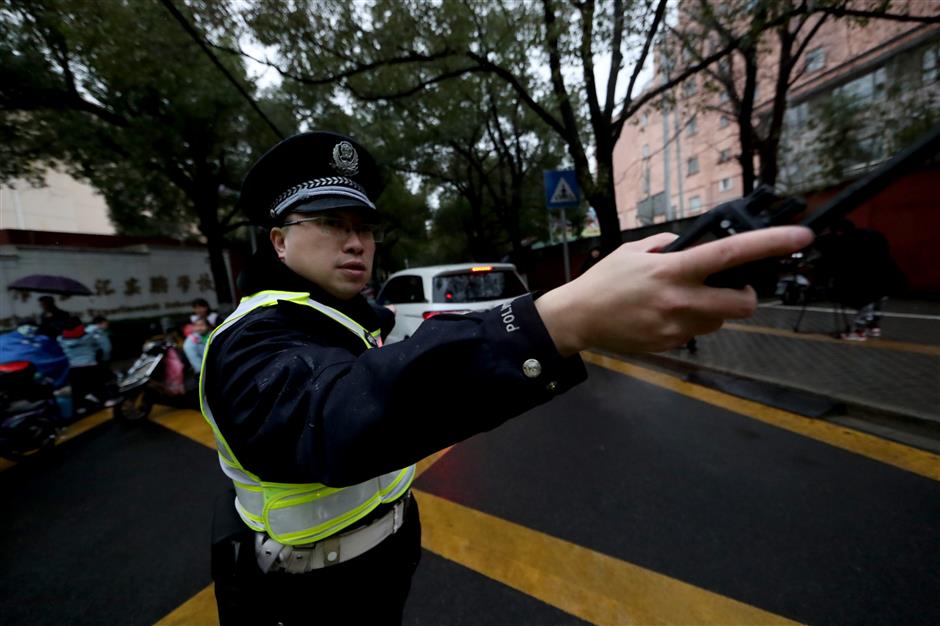