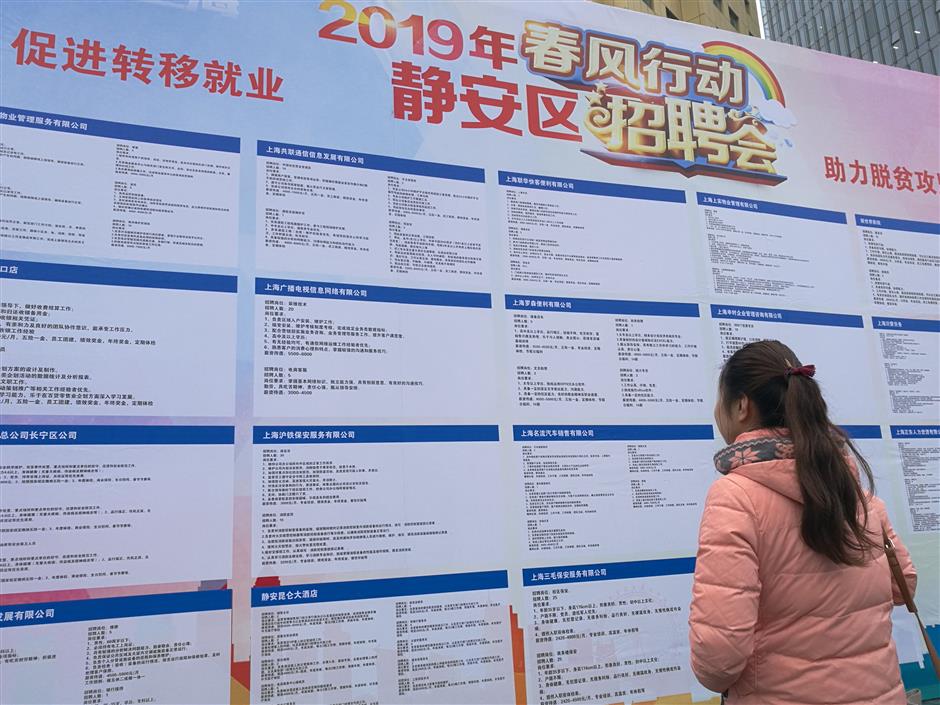 A job applicant reads the list of jobs on a board on a job fair held on the northern square of Shanghai Railway Station on Wednesday afternoon.

The first job fairs after the Spring Festival have opened across some Shanghai districts for job seekers from both Shanghai and out of town.

At the northern square of Shanghai Railway Station, a job fair with 40 companies offering over 1,100 openings for 170 posts was held on Wednesday afternoon, and the companies were generally satisfied with the turnout of job seekers.

The companies that set up stands at the fair are from various fields, including manufacturers, security and property management firms, logistics services, hotels and restaurants and IT companies.

One of the rare kinds of jobs offered at the fair is doctors and nurses for senior care homes. Kaicheng, a senior service provider which runs a few such facilities in Jing’an District, says on its recruitment notice that it is in “urgent” need of nurses for the elderly.

The position offers 5,000 yuan (US$740) a month, not bad compared with many other jobs that are paid at 3,000 to 4,000 yuan. Chen Yan, a human resources manager at the company, said interest was not lacking, but qualified applicants were hard to come by.

“A former taxi driver asked about it, but he has no experience in this job at all, and some others, when they heard that they would have to help old people use the toilet, retreated,” she said.

Zhang Chenguang, general manager of Qimeng, a local human resources agency, said the labor shortage over the past few years is expected to be relieved this year.

“There are abundant job seekers, and we were told by businesses, especially e-commerce companies, logistics services and manufacturers, that the openings available could be more easily filled,” he said, adding that it’s the case both in the Yangtze River Delta and the Pearl River Delta regions.

Zhang also found that the demography of job seekers at after-holiday labor markets this year is older than before.

“There are more people in their 40s and 50s,” he said. “The reason could be that more and more young people look for jobs online these days.”

Zhang said companies usually would prefer job applicants that are younger because older people are considered to be less competent in learning new skills.

A local middle-aged man surnamed Qiu, who lives on Linfen Road in the northern part of the district, was looking for a job as an electrician at the fair. He said he worked as a fitter before.

“I want to find a job that’s not far away from home, but most factories that look for fitters now are located in suburban districts like Jinshan and Fengxian,” he said. The factory he worked in was closed.