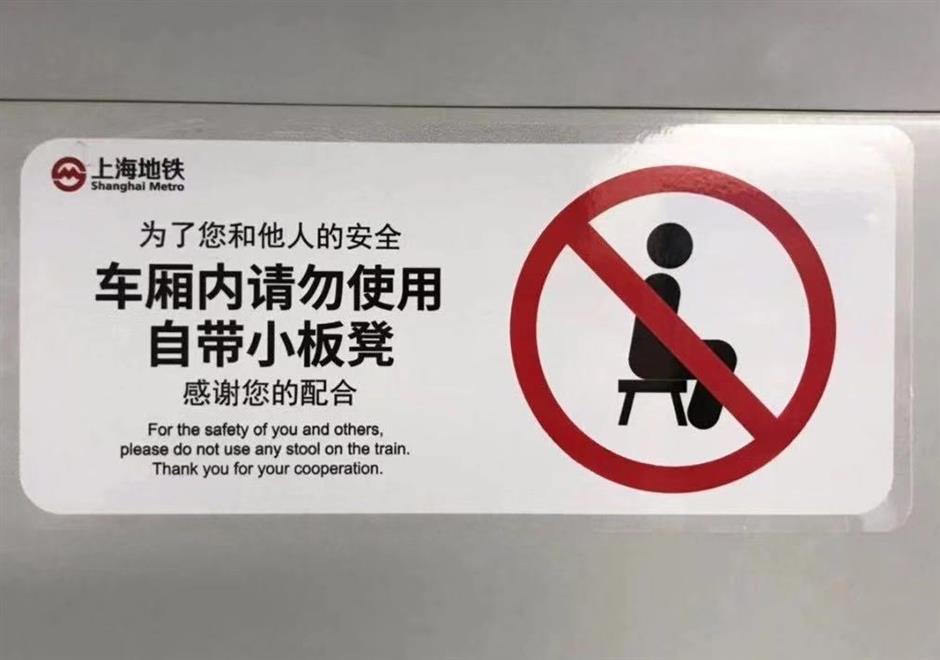 A bilingual sign on a train of  Line 11: “For the safety of you and others, please do not use any stools on the train. Thank you for your cooperation.”

From this week, all station and train broadcasts on Metro Line 11 have begun telling passengers not to bring stools onboard.

Bilingual signs are also on display inside the trains that read: “For the safety of you and others, please do not use any stools on the train. Thank you for your cooperation.”

Passengers bringing their own stools on suburban Metro lines to make the trip easier has become a common scene, especially on Line 11 which runs from Huaqiao Station in the neighboring Jiangsu Province to Disney Resort Station in Pudong. The whole trip will take up to two hours.

But authorities argue the stools are safety hazards and cause inconvenience for other passengers.

Meanwhile, the Metro operators began inspections on the trains and ask those sitting on stools to put them away.

“Not only have these stools taken up space on the train, they also endanger others,” said Wang Qing from Shanghai Metro. “Especially when the train is crowded.”

So far, Line 11 is the only Metro line that has announcements asking people not to bring their own seats. Similar problems also occur on other Metro lines like Lines 1 and 3, but the Metro operator said it could be hard to do more than a warning.

“We would call for people to discipline themselves and think of others more,” said Yang Yizhong from Shanghai Metro. “But we can’t punish them for bringing stools.”