A startup providing solutions not problems

Wind Lion, a company specializing in environmental protection technology, is located in an old three-storey building near Tongji University in Yangpu District.

The building may be unimpressive but it provides an unlimited amount of possibilities for start-up companies with big dreams.

When Shanghai Daily visited its office, there were only two people working in a small room of less than 10 square meters. But after talking with Yuan Xiao, the company’s CEO, we realized that sometimes the best things come in small packages.

The 28-year-old has been at the head of Wind Lion’s operations since it kicked off three years ago. He may not be the most eloquent of speakers, but his enthusiasm more than makes up for it when talking about his professional field. Yuan is undoubtedly a specialist in his sector.

A graduate from the College of Environmental Science and Engineering of Tongji University, Yuan had a lot of experience under his belt before he joined the cut and thrust of the business world.

He was involved in several projects with a former teacher and found the hands-on experience invaluable. And he put that experience into practise after graduation in 2016 when joining hands with one of his best friends in a career in waste water treatment technology.

Why water treatment you may ask? “A few years ago, there were more than 600 coking enterprises in China working under full capacity despite the fact that they were not up to standard,” Yuan explained.

“The damage done to the industry has been extreme. The government said that if the production environment isn’t up to standard, the enterprise should be shut down.

“For industrial enterprises, survival is the most important thing. So there was an increase in the demand of waste water treatment. That’s where I saw my opportunity.” 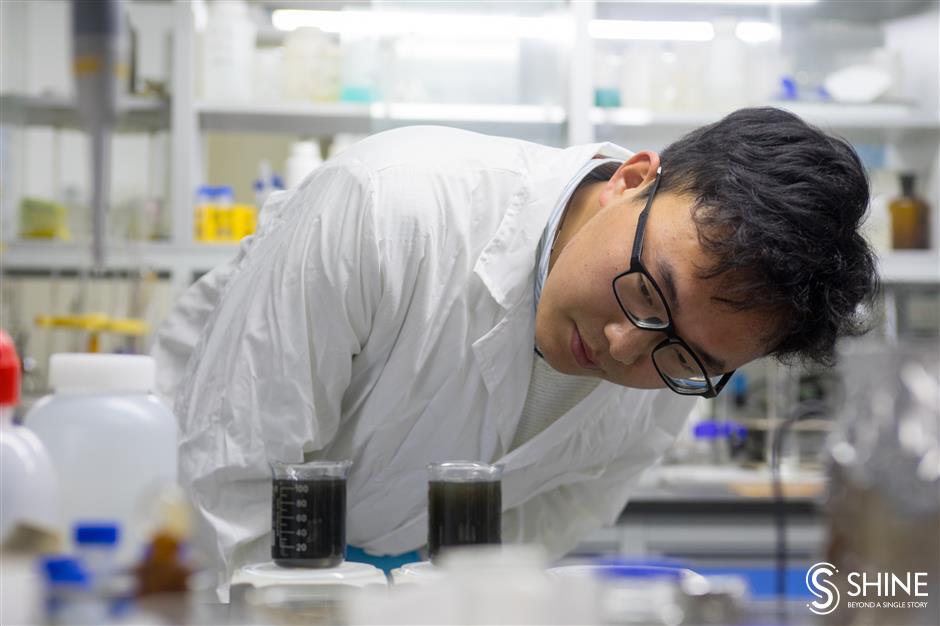 Yuan and his colleagues conduct all of the more scientific work at a rented lab at Tongji University. And during the water separation process it is common that Yuan would stay at the lab for over a week conducting his analysis.

Yuan revealed that his company struggled to get off the ground at first before having any success.

At that time, their factory was in Shandong Province, while the enterprise they cooperated with was in Anhui Province. So every time there were problems, they had to travel between the two provinces in one day.

“At the beginning we were a little naive,” Yuan admitted. “We thought it was very easy, and our product was perfect. But problems kept coming up when we took our sample to the cooperative enterprise. Meanwhile, we also had big problems on the purchase of raw material, and once we were even cheated by our supplier. It was a hard time for us, but a good learning curve as well.”

But after a year they were on the right track.

“So far our products haven’t had any problems, and the product quality is reliable,” said the 28-year-old. “We also have three to four clients, so we do have a decent cash flow.

“And in the future our growth rate can reach more than 70 to 80 percent.”

Yuan’s company now has more than a dozen full-time staff, most of them in their 20s. They are in contact with 40 cooperative enterprises across China, the farthest in the Xinjiang Uygur Autonomous Region.

But Yuan is humble in his achievements and says he has been quite lucky in business.

Because of his ties to the university, his company has received support funding of 300,000 yuan (US$44,708) from the “Young Eagle” project.

The “Young Eagle” project is a forward-looking model designed to help business-minded students open a business in Shanghai. Yet they still have student benefits like prepaid cards for the students’ canteens in Tongji.

The university cares for them even though they are no longer students.

“Never give up whatever problems you have,” Yuan said. “Solutions are always better than problems. You must consider your clients, seeing their real demands, and solving problems for them.”

The company’s slogan is “Once and for All” and Yuan hopes that his products can resolve their clients’ problems permanently. But at the same time, he also pays much attention to developing new products.

“If we want to open a new market, we must develop new technology to replace our old ones, so that we can have strong competitiveness,” Yuan said.