Football fans among those leading the way in sorting out garbage 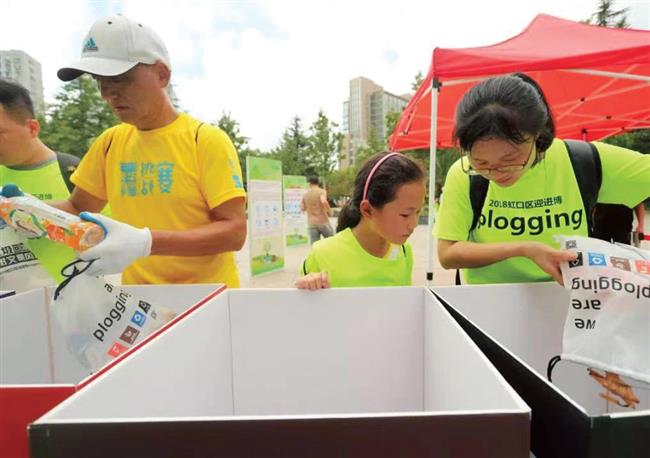 Hongkou District has stepped up the promotion of waste classification with football fans, senior residents and even foreign company officials taking the lead.

While visiting a community center in Hongkou on November 6, President Xi Jinping commented that waste sorting is a “new fashion,” and that Shanghai should make sure garbage management is done well.

Soon, garbage sorting will no longer be an option but a requirement as Shanghai’s first garbage regulations will take effect in July.

As a pioneer of garbage sorting, Hongkou has experimented with many methods to encourage a greener lifestyle.

By the end of the year, it aims to promote garbage sorting to at least 80 percent of its residential communities, companies and public areas, according to the district’s greenery and public sanitation bureau.

To achieve this target, the district government plans to renovate 942 garbage houses and deploy at least 40 garbage trucks specializing in kitchen waste. The aim is for around 600 communities to meet the standard of waste classification. With these efforts, the daily residual garbage collected across the district will be controlled to within 634 tons and over 100 tons of waste will be recycled, according to the bureau.

Quyang Road Subdistrict, a major residential community in Hongkou, for example, has been promoting garbage sorting among residents during its regular urban management inspections.

Based on its existing urban management platform, law enforcement officers are regularly inspecting shops, office buildings and innovation parks on how they sort garbage as well as dealing with the usual issues of business licenses, illegal structures and fire prevention.

In its residential communities, waste classification knowledge is being promoted through brochures, WeChat accounts and blackboards erected in the neighborhood.

Supervision hotlines have also been set up to encourage the public to report any violation during garbage collection and transport.

Government bodies and companies in Hongkou are taking a lead in reducing waste. Disposable cups, for instance, have been banned in many offices.

Shanghai is resolute about reforming the urban environment by establishing municipal solid waste management systems. With a permanent population of over 24 million and a floating one of about 5 to 6 million, Shanghai needs to dispose of up to 26,000 tons of garbage every day.

Nationwide, over 300 Chinese cities at or above prefecture level will start household garbage sorting this year. By the end of 2020, garbage sorting systems will be built up in 46 major cities in the country. 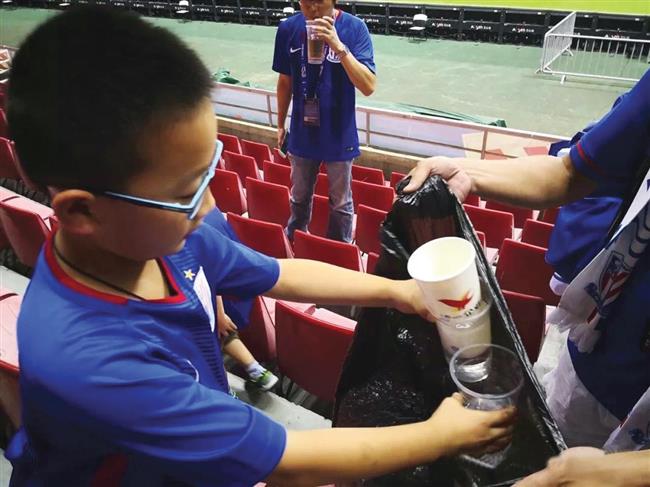 To find the most suitable measures to promote garbage sorting in Hongkou, the district has established the city’s first specialized garbage-sorting social organization called “New Fashion.”

The organization will first train residential building chiefs, neighborhood committee officials and residents on waste classification knowledge. The building chiefs, over 10,000 of them, will then organize residents to carry out garbage sorting in their communities.

The organization will also promote and explain the city’s new garbage sorting regulations, conduct surveys and offer consultation services, said Yang Yuan, the official in charge of the organization.

In the Rainbow Bay Community in Jiangwan Town Subdistrict, a number of garbage-recycling service stations have been built. Garbage-sorting guides help residents sort waste every day between 7am and 9am and from 6pm to 8pm.

“I can feel a sense of achievement by guiding residents to properly sort and dump garbage,” said Ma Guomei, a volunteer at the Rainbow Bay Community. “I used to dump all kinds of waste together, but have adopted the new lifestyle and joined the volunteer team with my husband after the promotion of garbage sorting.” 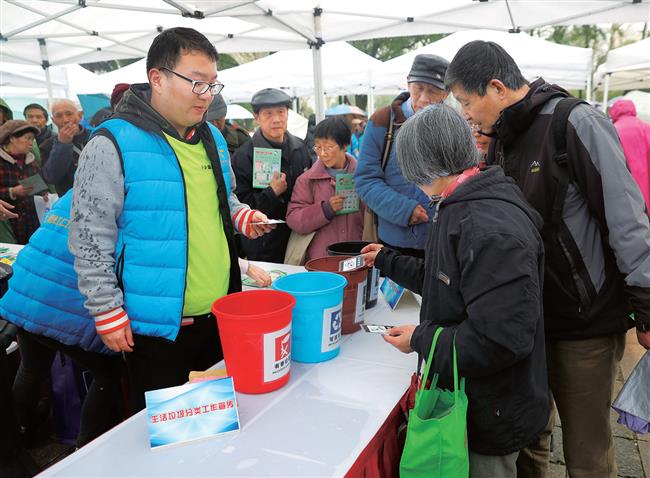 During a derby game between Shanghai SIPG and city rival Greenland Shenhua on March 1, garbage classification knowledge was promoted.

Though home team Shenhua was defeated 0-4 by SIPG during the clash, the garbage-sorting promotion proved effective.

Fewer drink bottles or other items were left behind by spectators after the end of the game, while residual and recyclable garbage was properly dumped into the two rubbish bins, according to Shanghai Changyuan Group, the stadium operator.

“We choose the first-round derby game at the stadium which attracts a large number of spectators to promote garbage sorting among football fans,” said Song Weimin, the stadium’s general manager. “We hope the new habit will be promoted to their families and citywide through the games.”

Posters and advertisements about garbage sorting have been placed across the 35,000-seat football stadium and spectators are encouraged to crush and dump plastic bottles and other waste in the correct bins.

“It is unnecessary to add bins for food and hazardous waste at the stadium like elsewhere. The main purpose is to make the sorting habit adopted more easily among the spectators,” said Xie Jian, vice president of the group.

Promotional videos of Greenland Shenhua players are broadcast ahead of each game to encourage garbage sorting, Xie said. Rubbish bins have also been placed around the football pitches for players and coaches to demonstrate the garbage-sorting practice.

“I used to dump all kinds of garbage into the single bin during the games, and now I think I should be a civilized football fan starting from properly classifying the waste,” said Shi Qi, a member of Lanmo, or Bluedevils, one of the city’s biggest fan clubs supporting the Shenhua club. 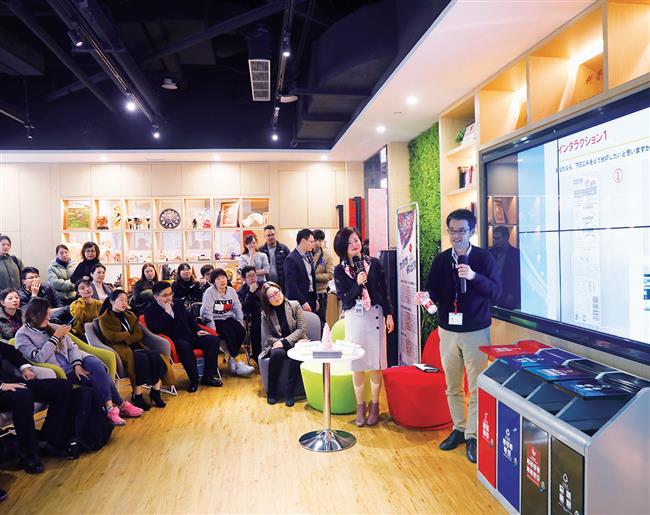 An initiative has been tested in Hongkou to carry out garbage sorting at historical neighborhoods that have limited space for classified garbage houses.

Garbage trucks now collect kitchen and dry garbage twice a day from residents in an old community in a conservation area on Xiangde Road.

The pathways in these communities are too small for garbage bins.

To promote garbage sorting in such places, the subdistrict regularly sends garbage trucks to collect trash. Residents are asked to classify waste at home and dump it in the trucks between 8:30am and 9am and 7:30pm and 8pm every day.

The residents, most of whom are over the age of 70, used to dump rubbish in bins on the street, said Dong Yueying, a 91-year-old resident who now serves as a volunteer to promote the new practice among her neighbors.

All 21 households at 48 Xiangde Road where Dong lives take part in the program, and over 90 percent of the waste has been correctly classified, according to the subdistrict. Cleaners and volunteers like Dong guide and help residents to properly sort and dump the garbage in the trucks.

The initiative is being expanded to neighboring communities, and over 100 households now participate in the practice.

Senior residents will help neighbors who may be at work during collection times.

Many of the younger residents will sort and place garbage at their front doors and volunteers will help dump it when the trucks or cleaners arrive, said Dong.

To better promote the lifestyle and solve problems, Dong holds a meeting every Thursday afternoon in her living room where residents can leave suggestions or discuss solutions with their neighbors. There’s also a WeChat group.

“Garbage sorting can benefit not only the community but also the country, so we citizens should support and promote the new habit,” Dong said.

The New Fashion organization has also opened training sessions for Dong and other residents about waste classification.

The subdistrict will purchase a batch of classified rubbish bins to make it more convenient for residents to sort waste at home, according to the subdistrict. 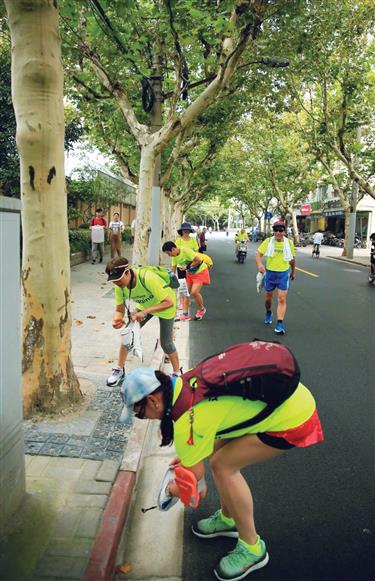 Senior officials at foreign companies in Hongkou are being invited to share garbage-sorting practices in their home countries with their local counterparts.

At a recent meeting of office staff, both local and foreign, Jenny Lovell, a company official from Manchester, the UK, shared her knowledge of waste recycling.

“I’m happy to learn that Shanghai is promoting garbage sorting which will benefit the community and everyone,” she said. The 26-year-old said that in her hometown each household is provided with at least two recycling methods.

She said waste was sorted into paper, plastic, metal and glass. Each household has separate bins for each kind of waste and anyone who fails to abide by sorting regulations can face fines of up to 100 pounds (US$130).

A senior official from Japan said the Japanese government has a number of regulations to prevent illegal waste dumping. If any household fails to sort garbage, a label of “violation” will be stuck on the door.

He said the government also releases a garbage collection calendar to each household. Cleaners will come to collect kitchen waste twice a week.