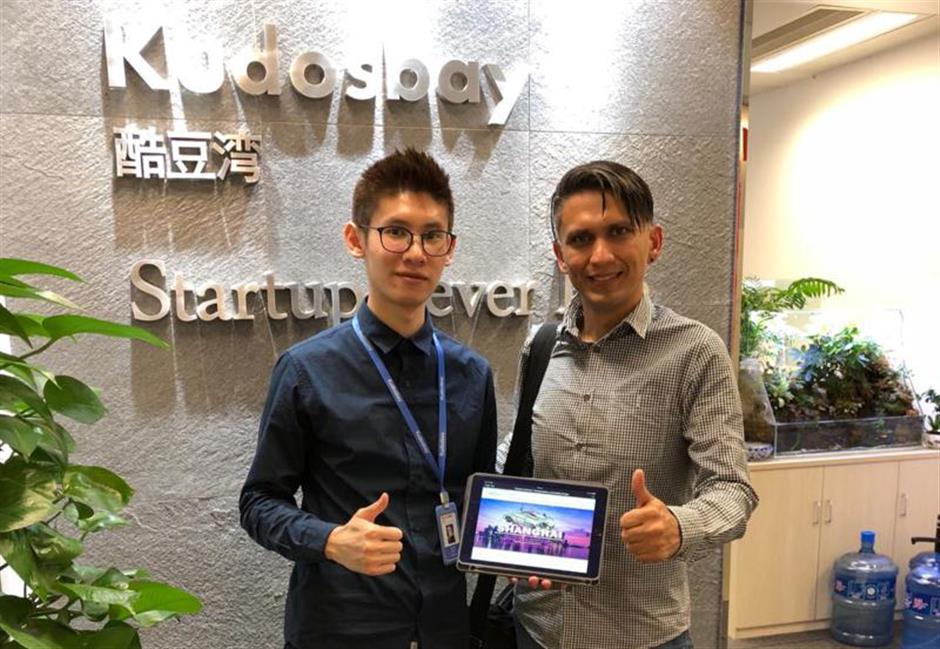 A foreign entrepreneur poses with a Kudosbay consultant at the nine-story foreign startup incubator.

According to data released by Shanghai Statistics Bureau, the city signed contracts to approve 5,597 foreign projects in 2018. Among them, 269 companies gained a local foothold with Kudosbay’s help, 4.8 percent of the total number of foreign startup companies attracted to the city last year.

Lin Qian, general manager of Shanghai Kudosbay Information Technology Co, said the company is demand oriented by the needs of both foreign and Chinese entrepreneurs.

A survey by Kudosbay of more than 60,000 expats showed that about 98 percent intended or had tried to start an undertaking in China. Many of them excelled in capital, resources, technologies, skills and experience, but encountered problems related to language, culture or policies.

Chinese companies, on the other hand, that wanted to launch businesses abroad, often faced problems such as unfamiliarity with overseas markets, the high cost of employees and questions over who to trust in a foreign country.

“Foreigners who set up companies in China can also serve Chinese entrepreneurs and guide them to go global,” said Lin.

In the 20 months since the company was established, Kudosbay has answered more than a million questions from expats on issues such as business administration and foreign investment approval, banking issues, tax issues and how to gain visas and work permits.

Huseyin Esin Altun, from Turkey, failed to obtain a  foreign investment approval because he didn’t have a bank account outside China.

Kudosbay consultants, after getting details from Altun and making enquiries with managers of some foreign banks, confirmed that some foreign students, before they start studying in other countries, would cancel their accounts because of the high yearly charge in their own countries. The company reached government officials and helped Altun explain his case to them.

Justin Emanuel Luvanda from Tanzania founded a business consulting company with the help of Kudosbay. At the beginning of 2018 he signed a contract with the Tanzanian tourism board to promote the country’s tourism in China.

His joy after he received the order soon turned to worry. Who are the target customers, how to promote the business, how to tell a good partner from  bad, whether the budget was enough and how to create a media strategy?

Lin offered to be his business consultant and invited experts to help him improve his project plan. Lin also arranged meetings between Luvanda and business insiders.

Luvanda has finished reporting his first phase of work to tourism officials in Tanzania and is ready for the second phase.

Cihan Ugur, who speaks fluent Chinese, is the legal representative of an international trade company in Shanghai. He introduced a road surface hardening agent from the US in 2017, but failed to establish a market.

After studying the case, Sun Chengyi, a senior business consultant at Kudosbay, said: “I’m afraid that your problem lies in that you are unfamiliar with the Chinese market layout and its characteristics.

“The technology and product you are promoting is good, but their market is not in Shanghai, but elsewhere in central or western China, or in rural areas,” Sun added.

Yuan Qiukun, Party secretary of the working committee of Songjiang economic and technological development zone, said: “Kudosbay, while helping foreigners with their entrepreneurship, is also helping to relieve the burden on government and improve its service and management.”