Local artisan builds a bridge to the past

Zhaozhou Bridge, the oldest standing arch bridge in China, has been replicated in miniature by a Minhang artisan who used neither nails nor glue.

The original stone bridge in north China’s Hebei Province was constructed between the years of 595 AD and 605 AD during the Sui Dynasty (581- 618 AD). It has survived wars, floods and earthquakes since it was first built, becoming an iconic landmark for thousands of visitors every year. 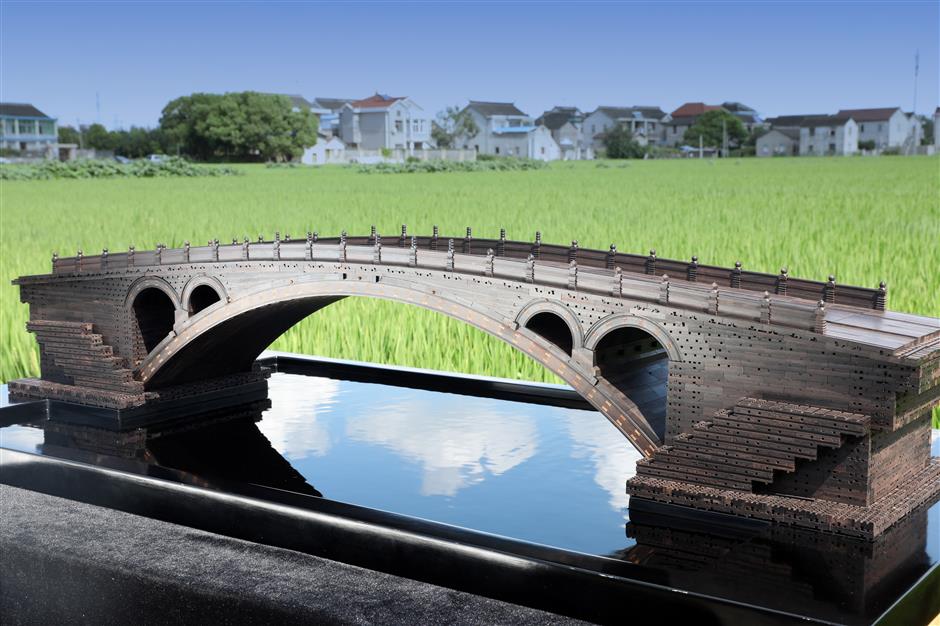 Wang Zhenhua’s miniature replica of Zhaozhou Bridge on a scale of 1:50

The secret to bridge construction in days or yore was the mortise and tenon structure. So that was the model Wang followed.

He spent three years handmaking 7,169 parts for his replica, which required more than 200,000 steps to complete. He used an interlocking “burr puzzle” for easy sliding and accurate fitting of the pieces.

“Because every component of the bridge model is handmade, if the knife I was using to create them broke, I had to start all over again,” he said. “Otherwise the components wouldn’t fit.”

The smallest component of the bridge is only 1.2 millimeters in size.

Wang estimates that he threw away more than 100,000 components in the bridge-making process due to the fact that each piece had only a 0.02- millimeter margin of error.

A lacquer pedestal beneath the bridge, made by another Minhang craftsman, is filled with water to reflect the bridge and give it that last touch of realism.

The grueling process of building the replica required not only patience but also professional knowledge of the construction of Zhaozhou Bridge.

The bridge was actually Wang’s second major work. His first was a miniature replica of the Qinian Palace in the Temple of Heaven in the imperial complex in Beijing.

“I visited the palace in 1986 and had been studying it ever since,” he said. Wang, born in 1958, began learning carpentry when he was 16, including how to make wooden artwork with the mortise and tenon joint structure. He graduated in engineering at university in 1984.

Wang, who is now bestowed with the honor of an “inheritor” of the skills for making miniature ancient architecture, said he was always intrigued by ancient history and construction.

It took him five years to complete the Qinian Palace, working out of his workshop. 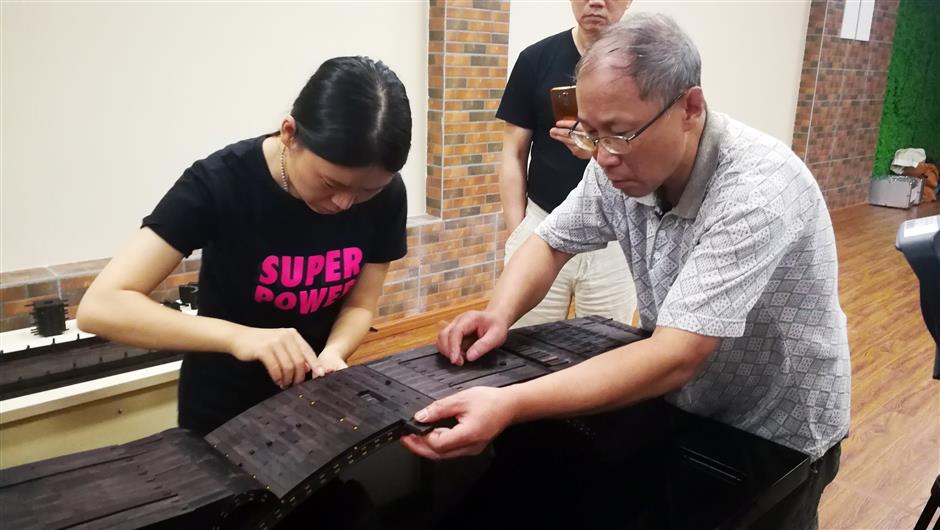 “With no funding and no official support, my passion and faith carried the model from a mental concept to reality,” he said. “Everybody at the time told me I was crazy.”

Even masters of the tenon joint structure sometimes use glue in tricky parts, but Wang was determined to be a purist and follow the ancient method to the last joint. His works don’t use even a drop of glue.

“I worked as a technician and craftsman all my life,” he said. “I’m no slouch when it comes to architecture. There’s no room for shortcuts or cheating.”

Some details of the palace door took him three years to resolve to his satisfaction.

He made five models of the palace, finally choosing the one that seemed best to him.

“But when I finished the Qinian Palace, nobody wanted to showcase it,” he said.

The director of neighborhood committee stepped in and found someone willing to exhibit Wang’s work for free.

The debut of the exhibition created a stir and won Wang a national golden prize.

“I don’t have any prestigious titles,” he said. “If I wanted to win the recognition of masters of the art, I had to have perfect mastery of the skill.”

Wang said he hopes the young generation in China will keep the tenon joint structure alive, even if only in toys. One of his students,

Zhang Mingming, said she wanted to learn from Wang in order to give her child the chance to play with cultural heritage at a young age.

To Wang’s delight, many young people have shown interest in learning the ancient craft.

“An 18-year-old medical student wanted to drop out of school to learn the skill, but I persuaded him not to give up his studies,” he said. “He spends every holiday in my workshop and monitors my project progress.”

In the Qing Dynasty (1644-1911), there was an imperial workshop that gathered together quality materials and skilled craftsmen to work for the royals.

“And the last craftsman of the workshop starved to death because his skills were abandoned and unwanted,” Wang said. “Then, for centuries, no wonders like the Qinian Palace were ever created.”

Wang’s skills are not about to disappear. He has plans for more miniature structures in the future.