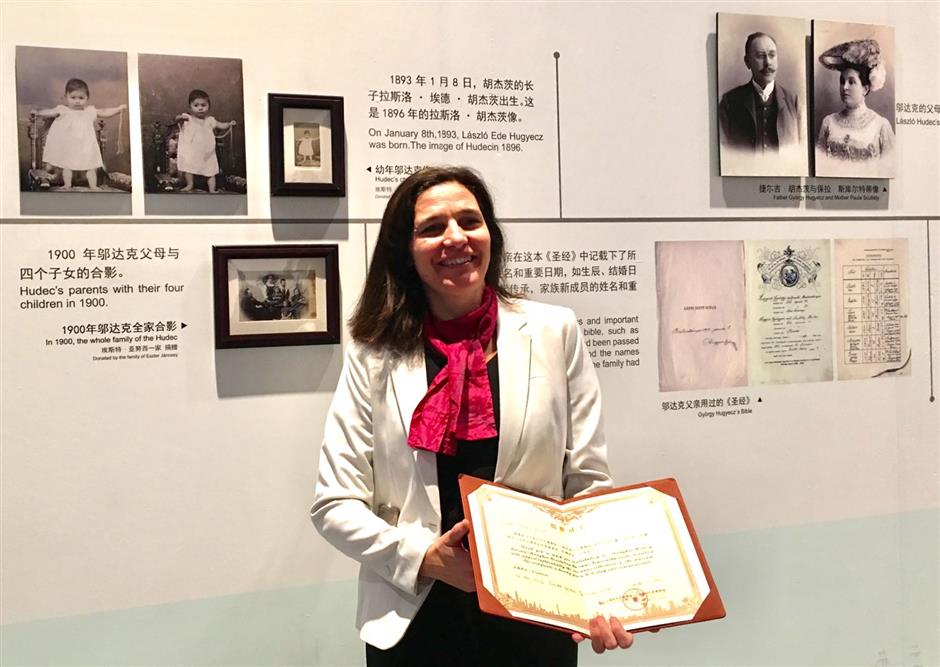 Virag Csejdy, the director of the Hudec Cultural Foundation and the great-grand niece of Hungarian architect Laszlo Hudec, poses in front of some photos of Hudec on Monday.

Shanghai History Museum unveiled a batch of new donations on Monday, including photos and equipment that once belonged to Hungarian architect Laszlo Hudec.

These new items are on display in the main hall of the museum on Nanjing Road W. as part of the celebrations of the first anniversary of the new site.

Other key exhibits include a dagger that was once the property of a Flying Tigers pilot, a medal from the 1949 Yangtze River Crossing Campaign and memorabilia of Chinese Basketball Association President Yao Ming. 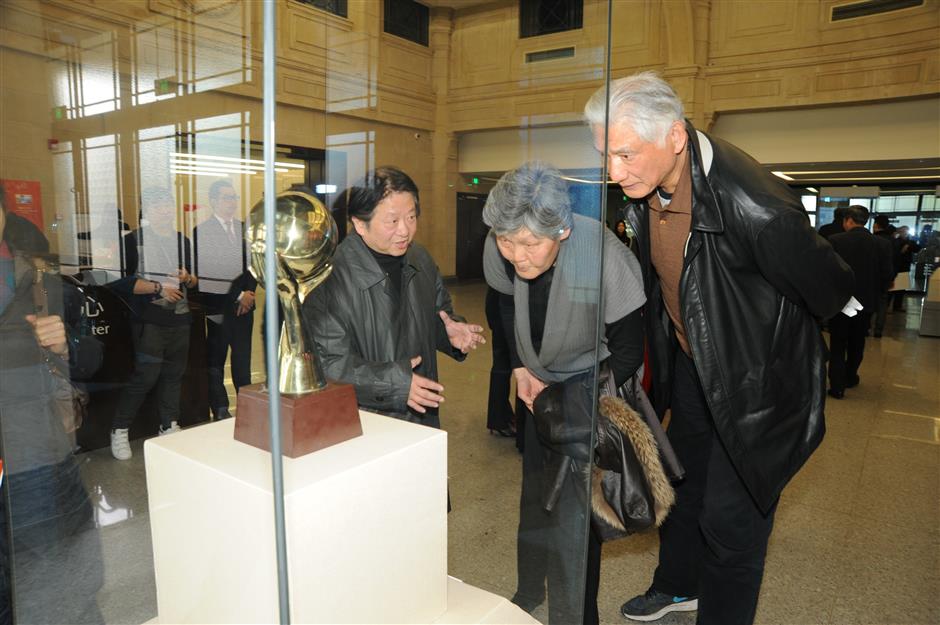 Yao Zhiyuan (right) and Fang Wendi (middle), the parents of Chinese Basketball Association President Yao Ming, look at a trophy they donated to the museum.

Hudec was involved in 54 projects, including the Park Hotel and the Grand Theatre, during his 29 years in Shanghai. The new exhibit features over 20 photos, household articles, a paperweight, scissors and other tools that Hudec once used. The exhibits were collected from Canada, the United States and Budapest.

A sketch of the Grand Theatre shows the original layout and proves that the theater was renovated during the 1930s.

Other items on display include Hudec family photos, documents of his education in the Technical University of Budapest, along with photos of his military service and his life as a prisoner of war during WWI. It is the first time Shanghai has hosted an exhibition featuring items from the Hudec archives in Budapest, according to Virag Csejdy, director of the Hudec Cultural Foundation and great-grand niece of Hudec.

"It is our greatest hope that this generous donation by the Hudec family is going to be the foundation of a new, Shanghai-based archive," Csejdy said. 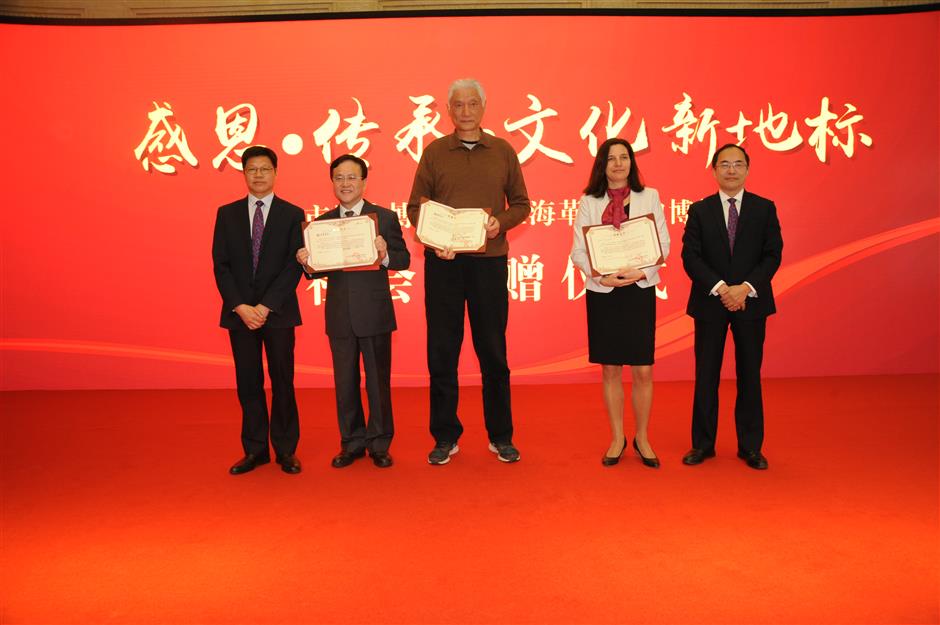 Donors receive certificates from the Shanghai History Museum on Monday.

Along with exhibits of obvious historical significance, a set of account books belonging to an ordinary local family also went on show on Monday.

The 29 account books were kept by certified public accountant Chen Qingyang between 1947 and 2017. His record of every daily income and expense of his family is a valuable chronicle of economic and social development.

"One of the last wishes of my father was that these accounts would be donated to a museum and become a reference for social and economic research," said his son Chen Huiliang.

Since its opening in March 2018, the museum has received 536 donations. Some 1.5 million people visited the museum in its first year.

Donations of historic archives, photos or other items related to Shanghai’s development since the opening of the port in 1843 are welcomed, including newspapers, books, letters, photos, signboards, coins, stamps, clothing, furniture, manufacturing tools, or other equipment 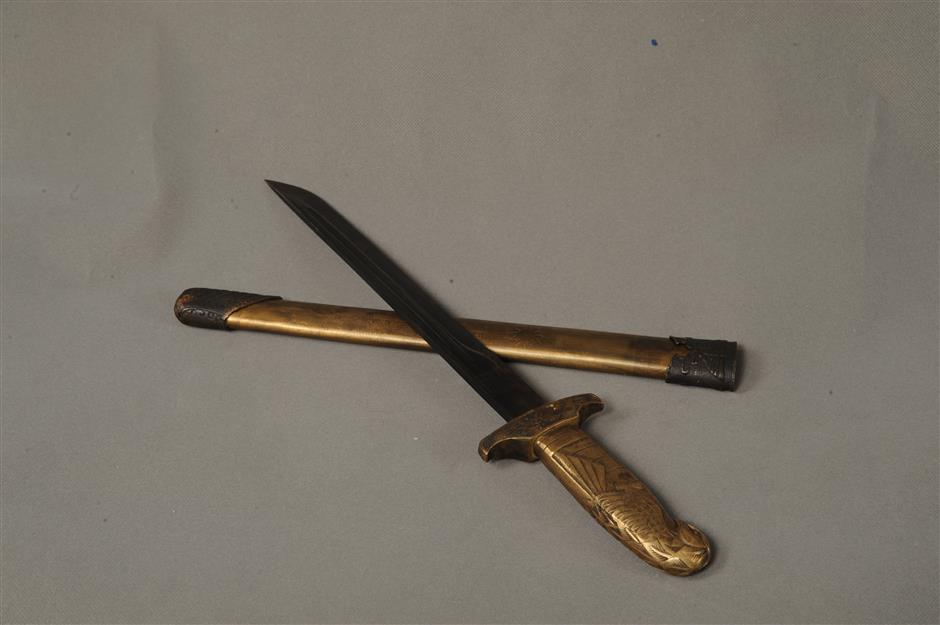 A dagger owned by a former member of the Flying Tigers, officially American Volunteer Group of the Chinese Air Force.

Several family account books kept between 1947 and 2017 by Chen Qingyang, one of the first certified public accountants in China.