Chongming, China’s third-largest island, is about 26 percent forested. When it hosts the 2021 China Flower Expo, forest coverage in the expo site will rise to 35 percent, and will increase to 50 percent after the event. Garbage disposal and sewage collection in the site will be at 100 percent while the use of renewable energy will be higher than 20 percent.

Organic farms produce vegetables and fruits sought throughout Shanghai. Natural wetlands, fresh air and clean waterways have made the island a favorite getaway for those seeking a respite from the chaos of urban life.

Last year, all the surface water environment function area reached the quality standard and the air quality was excellent on 86.3 percent of the days. Moreover, 33.4 percent of the household garbage was recycled.

By 2040, Chongming will be characterized by “green development, culture, wisdom and sustainability,” according to Li Zheng, chief of the island district.

Chongming Island offers a scenic, peaceful environment for jogging and cycling. Some 220 kilometers of cycling track and 42 kilometers of a running track along a riverbank are popular with local residents.

Along both routes the environment changes in delightful ways. Zhongxing Town is awash with cherry blossom at the moment. In Xincun village, there is the sweet scent of osmanthus while Miaozhen Town features maple trees that turn a brilliant scarlet in the fall.

The paths through Luhua Town follow the banks of a scenic lake and pass by tangerine orchards. Changxing Town features a four-season scenic area, complete with bicycle rental stations and service centers. 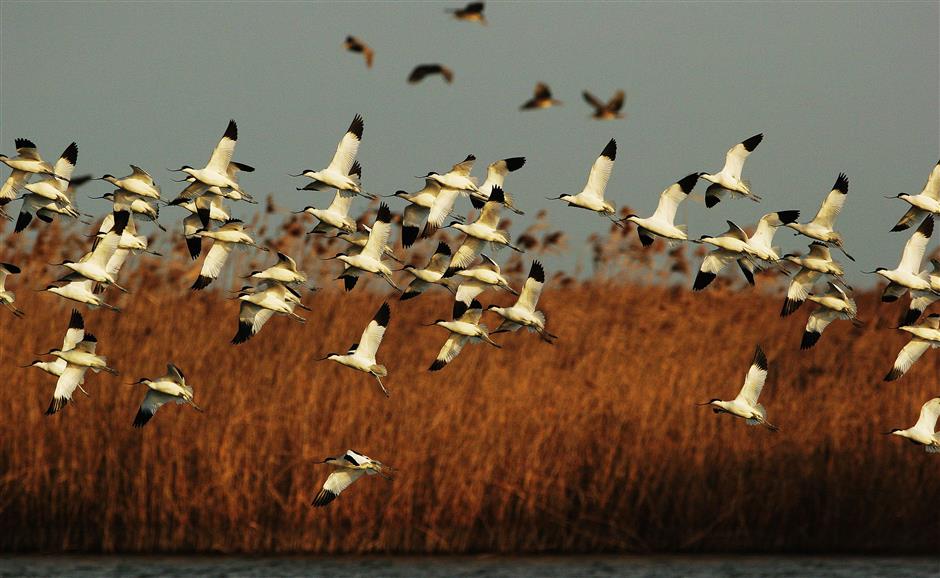 The Dongtan Wetland in Chongming is a favorite resting place for migrating birds and a great site for birdwatchers.

Chongming has long been a favorite site for birdwatchers. Its protected wetlands are stopover points or wintering grounds for millions of birds migrating between Siberia and Australia. In recent years, island officials have announced plans to step up the campaign against illegal poaching of wildlife, including birds.

“Preventing illegal hunting, including the use of nets and poison, is a key priority for Chongming District,” said Li.

The Xisha Wetland on the west side of the island and Dongtan Wetland in the east are the first priorities when it comes to law enforcement.

Law enforcement teams have been established at forestry stations, with wildlife protection patrols in every village.

In recent years, the Oriental stork (Ciconia boyciana) has been spotted in the Dongtan Wetland Protection Zone while the number of cygnets is on the rise as are birds such as the mandarin duck, the black-faced spoonbill (Platalea minor) and that Eurasian spoonbill.

The population of the island and land available for commercial development are both being strictly controlled to protect the environment. The population will be kept to around 700,000 by 2020.

The Yu’an Community in Chenjia Town is a key area for the disposal of household waste.

At the corner of one Yu’an residential complex, the garbage disposal room looks pretty much like a service center. The wet waste disposal machine inside can transform half a ton of waste into organic fertilizer after a process of smashing, dehydration, drying and bio-fermentation.

Some resident volunteers patrol around the garbage disposal room, helping neighbors learn the correct way to dump their trash. They have also turned the garbage room into a “scenic spot” in the neighborhood.

On shelves in the garbage room there’s a display of green plants fertilized by the “waste.” 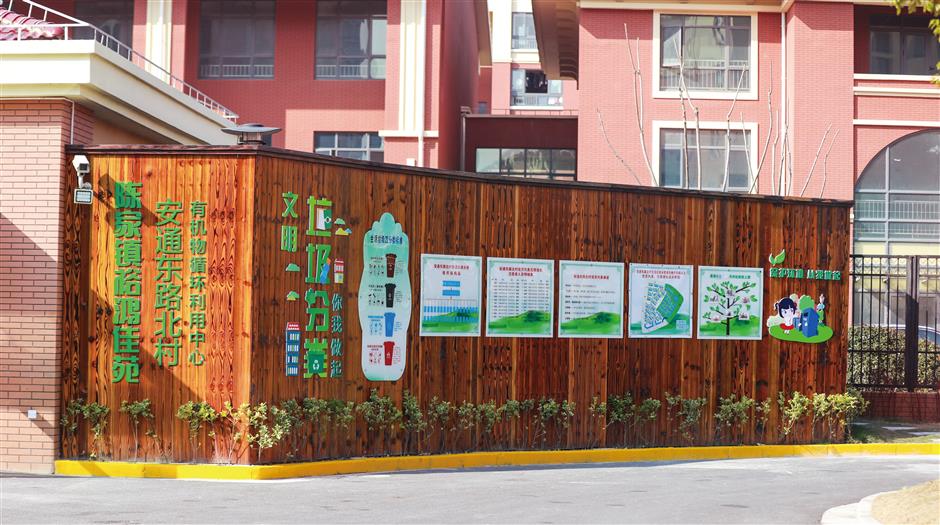 Behind this attractive exterior is the garbage disposal room at the Yu'an Community.

“The garbage room used to be messy and smelly,” said Chen Xiaofeng, deputy director of Chenjia Town’s City Appearance Administrative Bureau. “So we came up with plans to beautify it. To our surprise, local residents were enthusiastic about the idea.”

A 10-square-meter septic tank provides a system to recycle clean sewage water back into the creek, using anaerobic filtration, precipitating and active biofiltration. This tank deals with about 30 tons of sewage water from more than 100 houses in and near Huapiao Village.

“The system really has changed my life without any noise,” said Huang Shengdong, a resident of Huapiao Village. “I can open the windows and not worry about the foul odor or hordes of mosquitoes.”

All buses on the island will be emission-free by 2020, and 80 percent of travel will be by public transport, according to plans.

Chongming Island wants to go beyond cycling and jogging in offering a range of sports facilities and events for the public.

The island has been the venue for the Asian leg of the UCI Women’s World Tour for 15 years. The race brings the world’s best cyclists together to race across one of Shanghai’s ecological wonderlands.

Since 2014, marathons and other races on the island have attracted scores of professional and amateur runners from all over the world. The 42-kilometer track at Sanxing Town affords joggers views of forests and green fields.

Plans call for four public sports centers and a sports park. The 50-hectare park in Chengqiao Town will feature facilities for football, basketball and tennis, and a water-sports area will be designed for rowers, kayakers and dragon boat racing.

Sports centers planned for Hengsha Village and the towns of Changxing, Baozhen and Miaozhen will include facilities for swimming, table tennis, badminton, indoor rock climbing, squash, basketball and jogging. 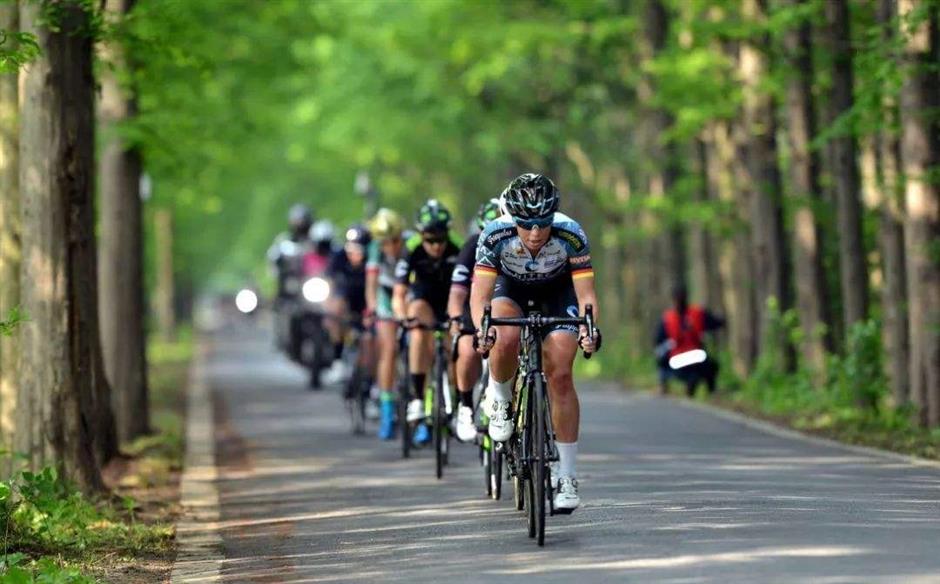 Chongming is an ideal place for cycling events.

Agriculture on the island is high-tech, high-quality and has a high added value. Chongming is aiming to reduce the requirement of fertilizer in agricultural production to nil and also eliminate the need for pesticides in the future.

Last year, Chongming brought its new hybrid rice from a 6.7-square-kilometer plot of land that uses only organic fertilizer. This new brand — Chongming Rice — is prized for its good taste and smell. The paddies where it is grown are all weeded by hand.

Ducks, frogs and solar-powered bug-zappers are used for pest control and to detect chemical fertilizers and pesticides. The farm has also set up an online retrospective system that allows consumers to check the growth process of the rice.

“Crayfish and crabs are super-sensitive to chemical fertilizers and pesticides, especially when breeding, so if crayfish can breed in this rice paddy, it means no pesticide is used at all,” explained one of the farmers from the Chunrun Rice Field.

“It is a great micro-ecological system because what drops from rice plants are natural fertilizers,” he added. “The fish, crayfish and crab are food for pancake turtles, the farm’s most profitable product.”