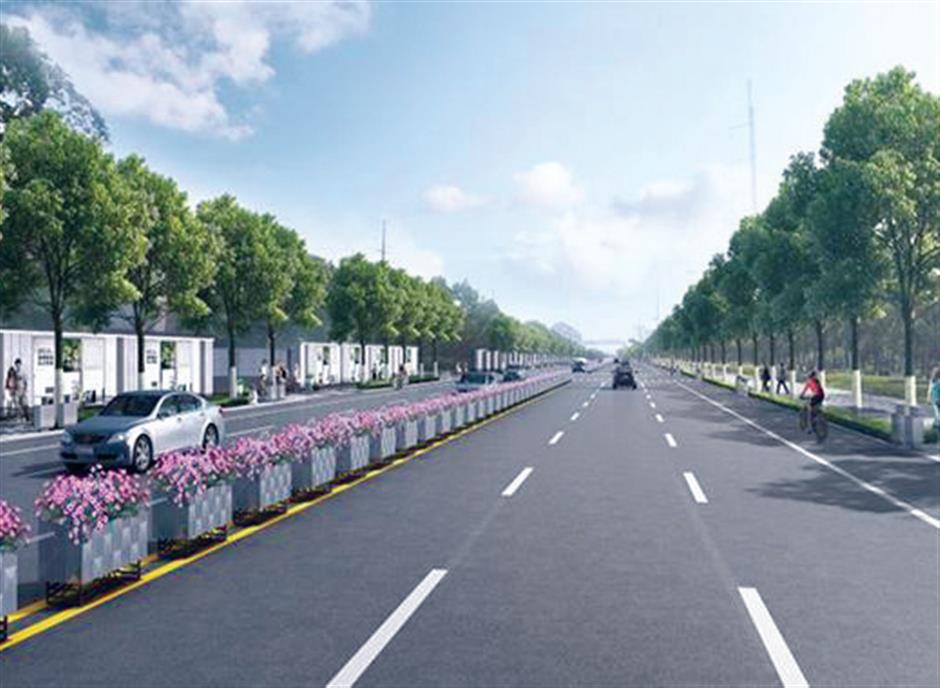 A road in the neighborhood of the China-Israel (Shanghai) Innovation Hub is unveiled after renovation work is complete.

A hi-tech renovation has been completed onto the former site of a prestigious Shanghai pen factory in Putuo District which is set to become an innovation hub for Chinese and Israeli companies.

The Shanghai Hero Pen Factory, a brand dating back to the 1930s, will be the first phase of the China-Israel (Shanghai) Innovation Hub. The industrial heritage is being developed into an AI Park by Putuo District government and the Lingang Group.

During the renovation, Internet of Things technology links the lighting, energy, elevator control and environ-mental monitoring. Through big data algorithms and cloud download technology, office in-telligent control, conferences, exhibitions, business and pub-lic services will be upgraded. In the near future, visitors will be able to experience high-end intelligent services at the park.

The AI Park is part of the strategic cooperation between the Lingang Group and the East China headquarters of Tencent Group.

Their first pilot project is being carried out at the Hero World industrial heritage site. Based on core Welink technology from Tencent, a safe and flexible Internet of Things-like operating system, a smart building network platform featuring artificial intelligence, algorithm identification and cloud computing, will be created.

The initial smart building application will be conducted on the No. 15 building at the site.

Twenty vertical systems such as elevators, lighting, air-conditioning and security have been connected onto the Welink system. Electronic fences, fire identification, intelligent en-ergy efficiency, intelligent conferences and facial recognition will all be involved in the redesigned building.

The Hero Pen Factory features the different industrial building styles from the 1950s to the 1990s. The gold fountain pens manufactured there were once presented as national gifts to foreign leaders.

The historical buildings will house the first batch of enter-prises in the innovation park. The structure of the buildings at 127 Qilianshan Road are also being reinforced but their historical appearance retained.

One of the buildings has been turned into an exhibition hall displaying plans for the surrounding Taopu Smart City, a developing business district featuring smart and innovative enterprises.

The exhibition will be upgraded for the innovation park. It will feature digital facilities as well as conference and exhibition spaces outlining cultural and scientific exchanges between China and Israel.

Meanwhile, greenbelts are being created along Dunhuang, Qilianshan, Wuwei, Yongdeng and Zhennan roads. Further improvements are planned to expand vehicle lanes and move overhead cables underground. Sidewalks around the hub will be paved with granite.

To support the construction of the innovation hub, the Caoyang No. 2 High School in Putuo has opened an Israeli science and technology experimental class. The school has opened a Hebrew language class in cooperation with the Hebrew Department of Shanghai Inter-national Studies University. Five students are taking four classes each week, which include group discussion and debate, to ac-quire the language along with Israeli culture.

The school has also been carrying out exchanges with Israeli schools such as Haifa Hebrew Reali high school and the Israel Institute of Technology, through various activates such as junior science and technology class, youth expos, study tours and group discussions.

The practices are expected to establish a good cooperative relationship and lay the foundation for cooperation between Israel and Putuo in the fields of economics, culture and education, according to the district government.

As part of the partnership announced by the Chinese and Israeli governments during Israeli Prime Minister Benjamin Netanyahu’s visit to Beijing in March 2017, the innovation hub will support technology transactions and service trade between the two countries.