Shanghai is aiming to revive its nightlife after closing down noisy late-night bars and rowdy eateries in response to residents’ complaints over the last few years.

It believes a strong nightlife will promote economic growth.

Shanghai is also aiming to become an international shopping destination, and it can’t do that without a vibrant nightlife.

According to a set of measures released by the city government, every district will appoint a local “nightlife director.”

And it will recruit a “nightlife CEO” to promote nightlife economic growth.

In 2017, New York formed an Office of Nightlife. And it named “nightlife mayors” to manage relations between neighborhoods and night spots.

There are similar offices in cities in Europe, including Amsterdam in the Netherlands and London in the UK.

Yongkang Road in Xuhui District used to have rows of bars on the first floor of residential blocks.

It was a favorite party area for foreigners who sat out under the stars and neon lights, drank alcohol and conversed.

However, residents felt their neighborhood was overrun with outsiders, and had to put up with trash-strewn streets in the morning.

Officially, eateries, including bars and coffee shops, are banned from having tables on the street.

When the city started to enforce the regulations, corner bars had to close or move to expensive shopping malls.

Now that will change.

Bars that meet some requirements will be allowed to have tables on the street in certain periods, the city said. Also, some streets will be closed to traffic at certain times for bars and late night snack stalls.

Liu Min, deputy director of the Shanghai Commission of Commerce, said: “We want to create a cozier environment for a nightlife economy.”

In other global cities like New York and Paris, it is common for people to sit outdoor when having a coffee and enjoy the streetside vibe.

As many cafes are on the first floors of residential buildings, they coexist with residents. The 800-meter-long Daxue Road in Yangpu District is lined with coffee shops with outdoor tables. However, it is a unique case. The pavements are wide and even if tables are placed outside it doesn’t affect passers-by.

Also all of the stores are under the administration of one property management company, and the upstairs are mainly offices with only a few residencies.

Liu said: “We will allow some coffee shops to place some tables on streets in summertime. We will regulate their operation.” 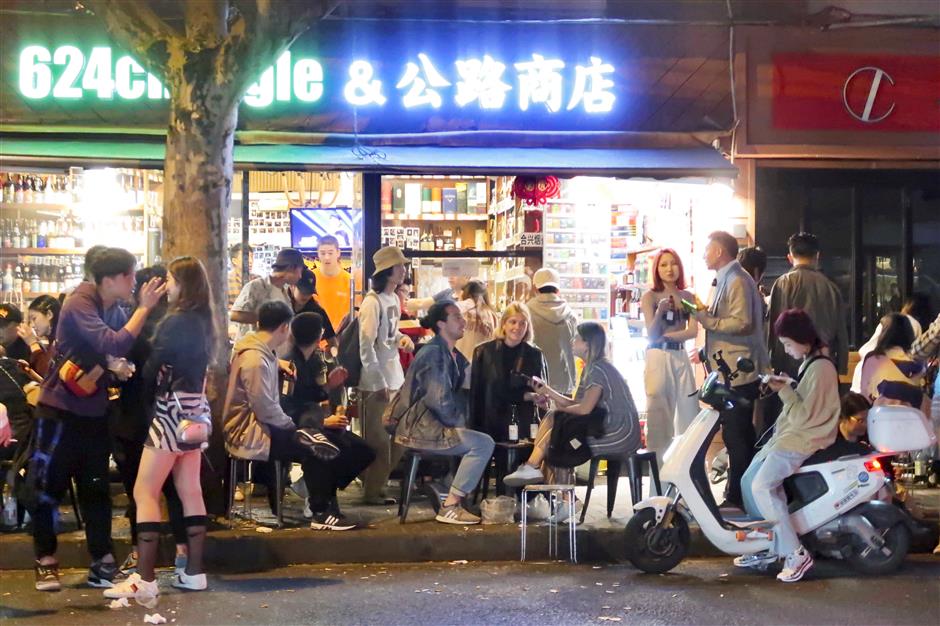 There are stools on the pavement outside a store on Changle Road so that people can drink and talk.

A reporter from Shanghai Daily visited a residential area on downtown Changle Road at 10pm on Saturday, and in a departure from normal practices found small plastic chairs and tables had been set up outside a convenience store for people to drink and socialize.

The female boss, nicknamed Sister Ying, told Shanghai Daily that she thinks it’s great if the government allows outside tables.

But she also admitted that it would affect residents.

At present she tells customers to keep their voices down and throws away the trash herself.

A resident said their life and environment were affected by the late-night drinking, though the shop owner has tried hard to diminish that. He thought the government plan of allowing eateries and bars to have tables outside, and even creating pedestrian streets was good, but they should be away from residential areas.

A Canadian, who was drinking outside the store and didn’t wish to be named, said she enjoyed the casual atmosphere outdoor.

“As long as it is in a respectful manner, it’s nice that people can come together on a street,” she said.

In Canada people will generally entertain at home on outside patios, she added.

She said she thought the streets in Shanghai are like backyards for residents as most don’t have private outside areas for entertaining.

At Found 158, Edward, who is from Chicago, the US, and has been in Shanghai for seven years, said he remembered Yongkang Road.

“Americans like to drink and socialize in an open area,” he said.

“You can walk around and see friends. You can’t do that with a bar in a shopping mall.

“People would like pedestrian streets. The city I went to school in had a downtown street with bars, cafes and restaurants that was closed to traffic.

“Noise, trash and superdrunks are a problem but solutions can be found. Found 158 is a good example.”

Found 158 is a bar and restaurant complex in a sunken concrete area in a park. 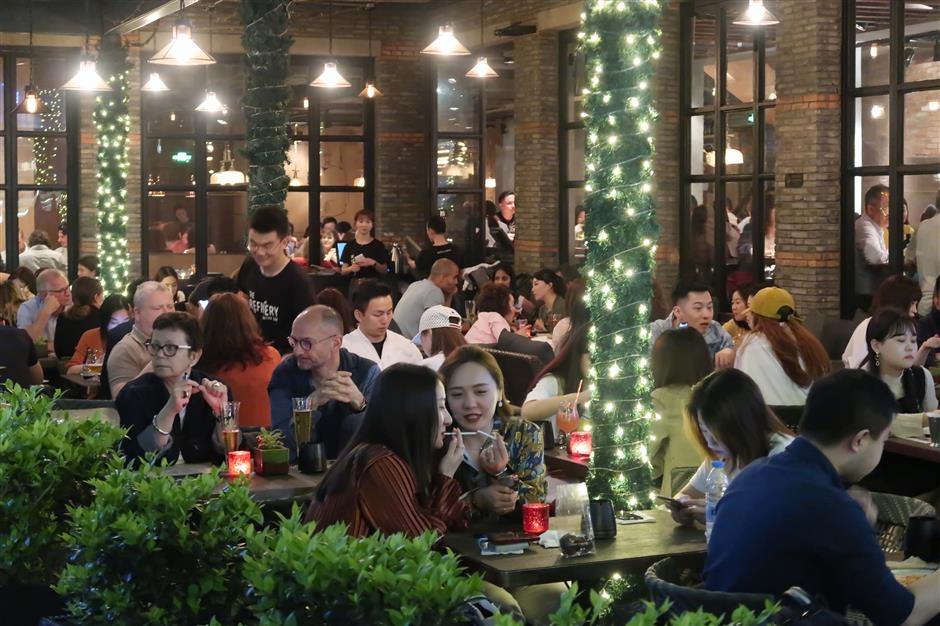 The patio of upmarket eatery The Refinery, Xintiandi.

At The Refinery Gastro Bar, Xintiandi, Thierry, from Paris, who has been in Shanghai for 15 months, said being outside was key for Westerners.

“The Xintiandi model is good, people can eat, drink and don’t disturb anybody and there are no cars,” he said. “We like the idea of pedestrian streets of bars, restaurants and cafes, but hope get rid of bicycles and scooters on the pavements.”

At Funkadeli on Fumin Road, John from New York said bars should be made responsible for keeping the streets clean and noise down.

“The nightlife here is cool because it still retains a very authentic Chinese culture, and at the same time it also is becoming so international and high-tech,” he said. 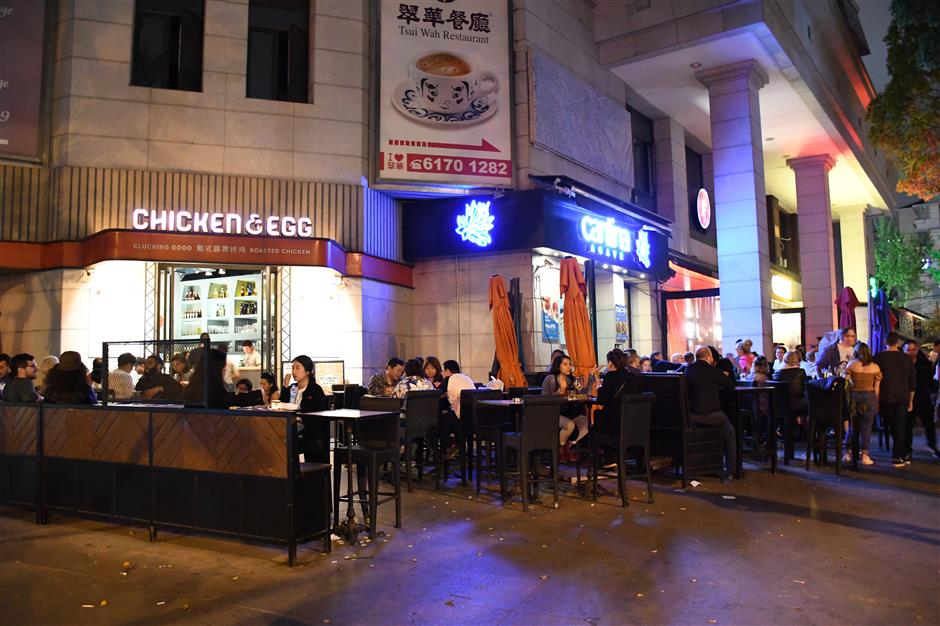 Restaurants on Fumin Road have outside tables.