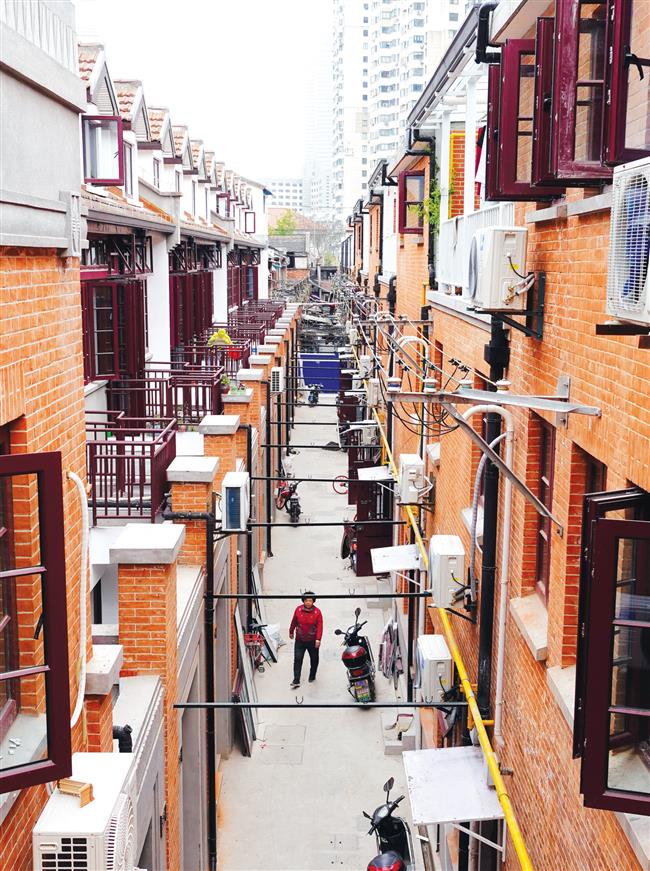 The Chunyangli neighborhood, built around 1921, has undergone renovations to solve a housing shortage for white-collar workers in the North Bund.

Hongkou District has launched a new round of renovation work to preserve the historical ambiance of its old neighborhoods and improve living conditions for residents.

The northern downtown district is known for its densely populated residential communities and traditional lane-style houses. They include the city’s unique shikumen, or stone-gated buildings, historical garden villas and former residences of prominent historical characters.

The city government plans to renovate 2.4 million square meters of old residential buildings by 2020. Most lane-style buildings will be preserved with the exception of those deemed to have no heritage value, which will be demolished.

“The historical neighborhoods should have warmth and vibrancy to showcase the enchantment of Shanghai,” Li said after inspecting the historical buildings. To achieve that goal Hongkou has carried out several trial methods on a number of other representative projects. 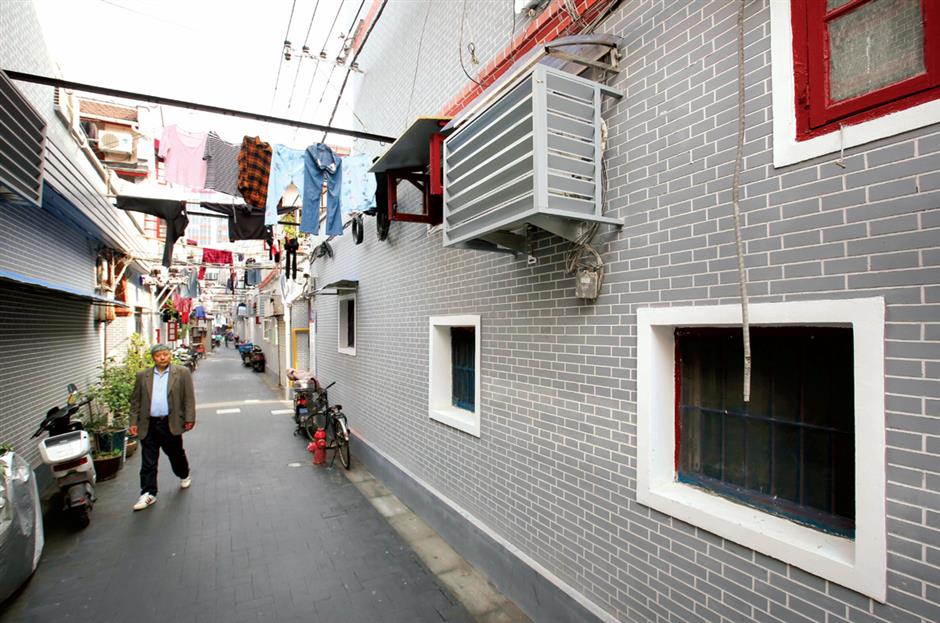 The appearance of the shikumen buildings has been revamped at Jinyangli neighborhood. The ground has also been newly paved.

A downtown shikumen complex has been home to both white-collar workers and the original residents as a result of a major renovation.

The Chunyangli neighborhood, built around 1921, is the site of the city’s first trial project aimed at modernizing the unique stone-gated buildings while pre-serving their historic appearance.

Work has been completed on the initial two phases of the project. Over 220 households were temporarily relocated. Most residents have now moved back into their refurbished homes.

Those wanting to rent them out can do so through a government-backed leasing company. This is an initiative of the district government to prevent the neighborhood deteriorating again because of low-end tenants or a single household being rented to a group.

It will also solve a housing shortage for white-collar workers in the North Bund riverside business hub, which is only 10 minutes’ walk away.

“Young office workers are welcome to be our neighbors,” said Hong Guozhen, a senior resident who is about to move back to her renovated apartment with her husband. “I will ask them to dinner if they are too busy to cook themselves.”

The historical neighborhood has 23 shikumen townhouses with 1,181 households. Some 60 percent of the owners had long rented out their apartments and lived elsewhere.

The Beiwaitan (North Bund) Subdistrict has invited a third-party leasing company, the Chunyangli Property Development Co, to take control of the leasing services.

The “leasing butler service” takes charge of the decoration, renting, maintenance and other daily services to the tenants for the house owner without charging an agency fee. Residents can hand over the apartments to the company for a decade. A reasonable rental has been promised.

The apartments for rent will mainly target white-collar workers between 25 and 40 years old, said Yang Jun, general manager of the company. The tenants can report any repair or utility payment problems to the company around the clock.

The Chunyangli neighborhood at 211 Dongyuhang Road is a classic lane-style shikumen compound, listed as a protective heritage zone by the city government in 2016.

The district government launched the innovative renovation in 2017. The fully government-subsidized project replaces the former wooden-and-brick inner structures — that are rotten, pose a fire risk and have mice and cockroach infestation — with steel beams and other fire-resistance materials.

The stone gate, the most iconic part of the shikumen building and the exterior walls are preserved.

Original construction material, such as the red bricks and wooden doors, are being reused as much as possible. Each household can gain an additional 3.5 square meters of space on average and the layout has become more practical. 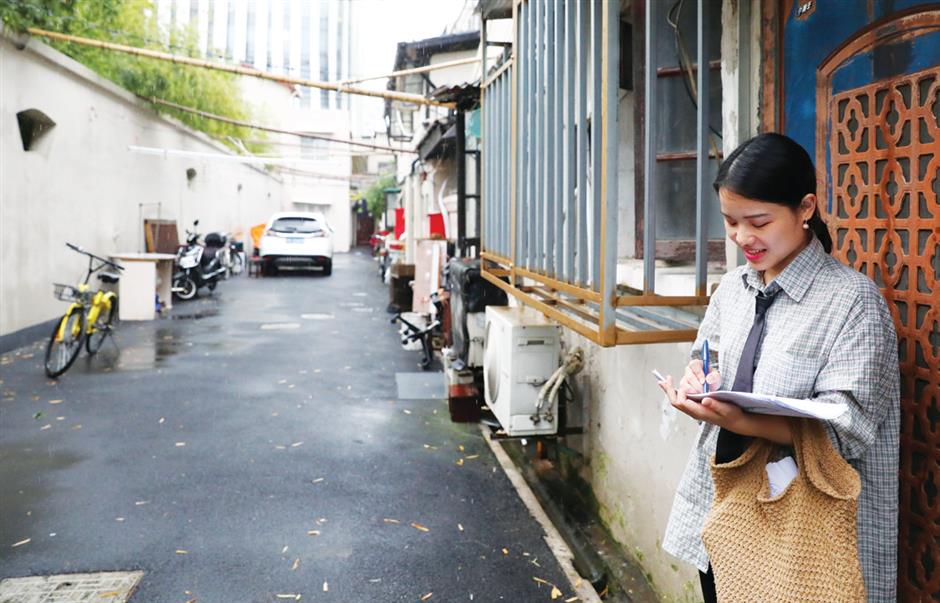 The backstreet row of century-old apartment buildings at 244 Wujin Road will receive a major facelift after more than 150 square meters of illegal buildings were torn down.

Cracked walls will be used to showcase the city’s unique haipai, or Shanghai style, and the walls will be adorned with plants and residents’ old photos. The appearance of the nearby buildings will be restored in the same style as the main historical apartment buildings.

Reading corners, shared laundry racks, as well as parking spaces for bicycles, and a charging station for electric bikes, have been designed after requests from residents.

The 40-meter-long backstreet once had over a dozen illegal houses, built by some tenants to make up for the cramped living spaces. The Sichuan Road N. Subdistrict demolished them last year and invited young architects to come up with ideas for the freed-up space.

Yi Simei, 24, an architect with the Shanghai Construction Design & Research Institute Co, dedicated most of her work and leisure time on her first project after graduating from Hunan University of Science and Technology last year.

“The backstreet was once too dirty and smelly that we would rather make a detour than walk through it,” said 66-year-old Wu Yuxian, who was born in an apartment on the second floor of one of the buildings.

The four-story buildings feature wood-en stairs, triangular stone gates, arched windows and delicate pillars. The buildings were listed as city heritage structures in 1999 and have been well-preserved.

Fifteen households live in each of the buildings, while a row of attached houses, originally built to accommodate maids and drivers, have been rented along the backstreet.

According to Yi’s plans, the 4.5-meter-wide street is about to become a “community living room.” Chairs and tables will be provided for neighbors to chat, along with a stone path for foot massage. Several traditional-style fan-shaped windows on the wall will provide better ventilation. Sound-control lamps and surveillance cameras will also be installed.

Yi designed several flower boxes at the entrance of the street to prevent vehicles from parking in the already narrow public space. Renovation work will start at the end of the month. Yi said she will regularly visit to see her design realized and the improvements to residents’ living conditions.

“That is the ultimate purpose for such micro-revamping campaigns,” she said.

The subdistrict said more subtle renovations will be carried out on its old residential communities with the cooperation of young designers. The hope is that their fresh, innovative ideas will improve living conditions and retain an historical ambiance. 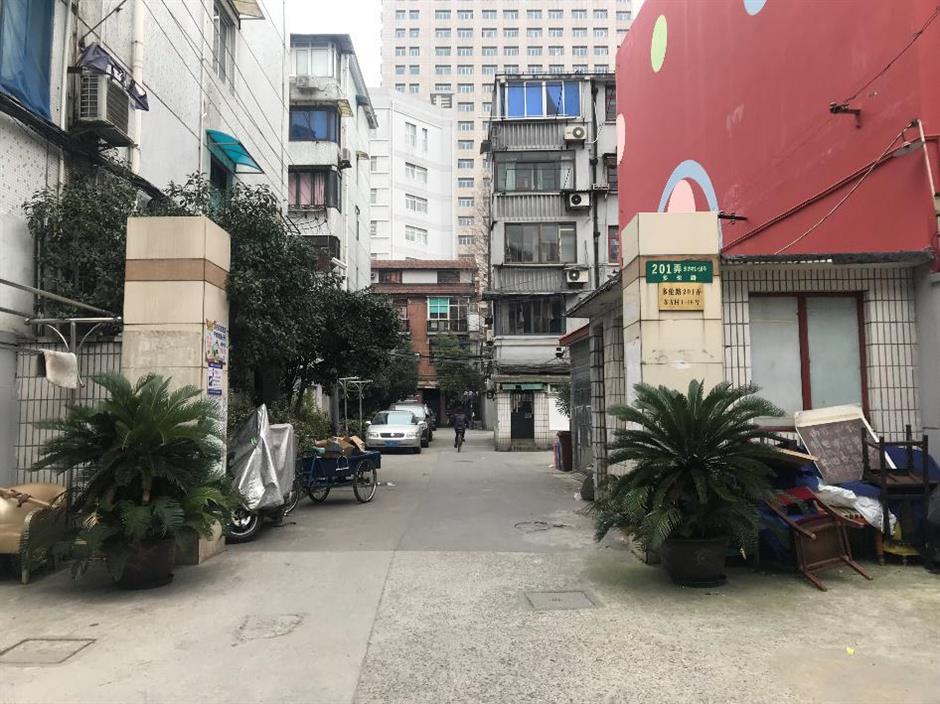 The entrance to the 201 Duolun Road community is tucked away among the historical villas and buildings on Duolun Road.

Three old apartment buildings on the historic Duolun Road will be renovated to add to the ambiance of the heritage-listed area.

Two six-story and a five-story residential block in the 201 Duolun Road community will have their appearance refurbished, public facilities renovated and environment improved.

The facade of the buildings will be repainted in red and white, similar to the historic villas and houses along the road. The current flat roofs will be redeveloped with slopes to prevent rain leaking in. Uniform awnings, laundry racks, air-conditioner covers and anti-theft windows will be installed.

“Though these buildings are away from the historical structures on both sides of the Duolun Road, the image of the whole community will be largely improved with the project,” a subdistrict official said.

The authority will also revamp the corridors, walls, ceilings and stairways in the public areas. The rusty handrails will be cleaned, while the floors will be paved with anti-slip tiles.

The authority is soliciting opinions from residents for more renovation work in the neighborhood, where the subdistrict plans to renovate 27,000 square meters of old apartment buildings this year.

Most of them were built in the 1980s and are in poor condition. A total of 462 residents in seven neighborhoods will benefit from the projects.

The facelift is part of an effort by the Hongkou district government to restore the literary and artistic ambiance of the historic Duolun Road.

A renovation project is also ongoing on the nearby memorial site of the League of the Left-Wing Writers in Shanghai, which was established in the 1930s to fight Kuomintang repression at home amid a worsening international situation.

The British neoclassic-style garden villa, a listed heritage structure, was built in 1924 and converted into an exhibition site in December 2001. The renovation will mainly repair leaks, eliminate termites and fix many broken parts to restore its original look.

The third floor of the building, which is currently used as offices, will be opened to the public. Many newly received exhibits donated by the descendants of left-wing writers will be displayed in the expanded exhibition space. 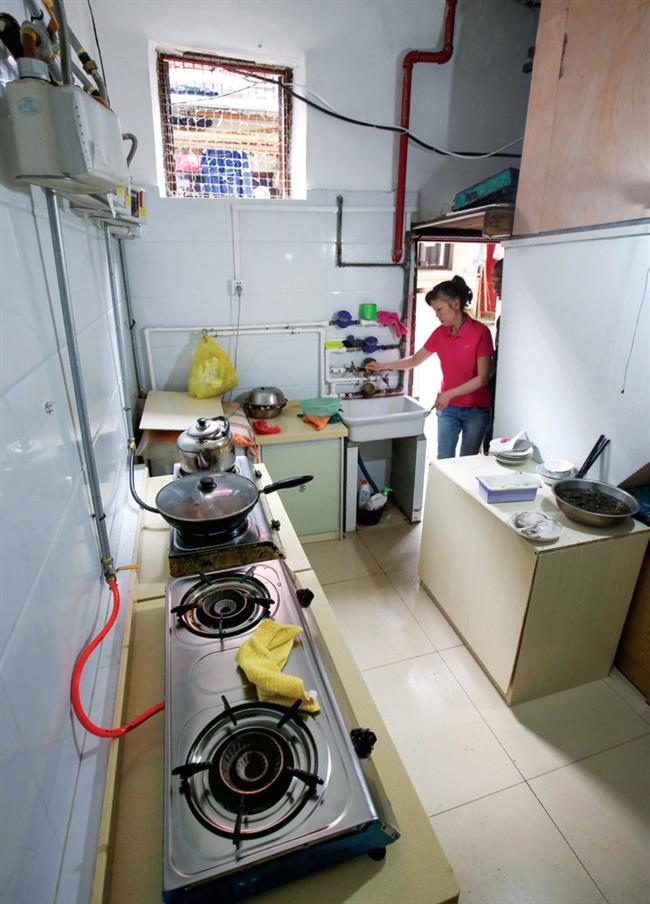 A woman in a newly redecorated shared kitchen at the Taoyuanli neighborhood. Six households share the 10-square-meter kitchen.

A renovation project has been completed on two century-old downtown shikumen neighborhoods. It includes the installation of private or shared toilets for residents who were still using chamber pots.

In the latest “1-square-meter project,” a total of 240 toilets have been installed for the Jinyangli and Taoyuanli neighbor-hoods near the North Bund in Hongkou District.

Designers took around a square meter from living spaces from eligible house-holds and rearranged pipelines without damaging the brick-and-wood buildings, for toilet installations. It has helped 70 percent of the neighborhood households, both built around the 1920s, get rid of chamber pots they had used for decades. The project also renovated kitchens shared by about six households living in the same building.

Electrical wiring on the walls and pipes once covered in black oil and dust have been rearranged while the floor and walls were tiled. A closet has been installed for each household’s stoves.

It was a challenging task to persuade every resident to agree to the renovation plan, said Wang Jinying, Party secretary of the Taoyuanli neighborhood committee.

Toilets couldn’t be installed over the dining rooms or bedrooms of those living beneath, which is taboo in traditional feng shui. Furthermore, the public kitchen has to be redivided fairly.

Though most neighbors have good relationships with each other, their private interests remain untouchable, Wang said. Before the renovation started in early 2018, officials with the neighborhood committee solicited opinions from each household, while designers made bespoke plans for each building.

The Yonglefang neighborhood was built by the Wing On company 88 years ago. Wing On ran one of the city’s biggest department stores. The homes of its senior clerks will begin their journey of redemption at the end of the month.

The neighborhood at 1774 Sichuan Road N. gained protective status as a typical new lane-style community. A total of 531 households live in the neighborhood with 11 historical townhouses, mostly squeezed into cramped rooms of about 20 square meters. Very few households have private kitchens or toilets.

The renovation is mainly dealing with public areas, including shared kitchens and toilets. Overhead cables will be buried, the cement pavement will be replaced by gray ground tiles and residents will be given help to install new uniform awnings and laundry racks.

Shared kitchens and toilets, mostly on the ground floors, will remain shared, but will be refitted with modern equipment.

The neighborhood on the prosperous commercial street, Sichuan Road N., was once a luxury community and only senior company officials were allowed to live there, according to a senior resident Kang Meijun. The pavement was tidy and the community beautiful and quiet, Kang re-called. The situation changed when more residents moved in and many apartments were rented to businesses.

Most of the buildings are well-preserved. The red brick and wooden window frames still shine and some of the original wood-en fences have been retained.

Fang Qiong, Party secretary of Yongmei neighborhood committee that takes charge of the area, said they had opened a WeChat account to encourage residents to submit suggestions about the renovation work.

“Most residents have a deep affection for the neighborhood and are happy to help the housing authority carry out the renovation work,” Fang said.

The neighborhood is right on Sichuan Road N. with its many popular grocery stores and eateries, while Shanghai No. 4 Hospital is five minutes away on foot.

The Yonglefang project is scheduled to be completed by the end of the year and will be a model for the remaining old residential neighborhoods.