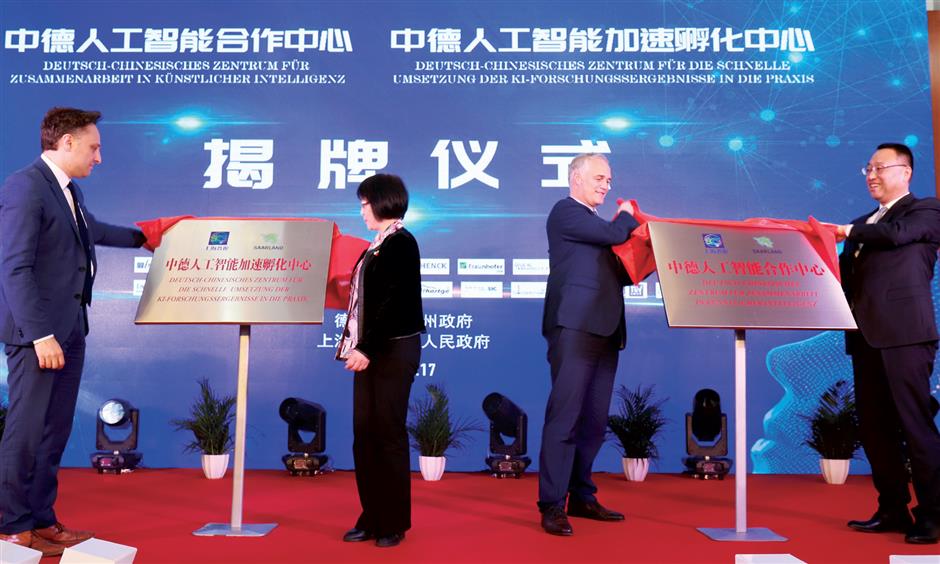 A Sino-German research center and an incubator for artificial intelligence were unveiled in Putuo District last week.

Scientists from China and Germany plan to carry out joint research in AI and augmented reality at the new important AI research platform in a bid to drive industry and technology forward.

Through technological cooperation and innovation, the centers will help drive the transformation and upgrading of the manufacturing industry, the Putuo District government said.

The centers were unveiled at International Technology Fair, which were held at the Shanghai World Expo Exhibition & Convention Center from April 18 to 20.

The fair mainly focused on AI and its applications in areas such as service robots and intelligent manufacturing, as well as the latest research and development technology achievements.

Saarland state in Germany, served as a guest of honor at the fair, along with Liverpool in the United Kingdom.

The German state exhibited AI and life science at the fair and held several activities including exhibitions and technological exchanges.

Further cooperation and exchanges between Putuo and Saarland are expected, said Zhou Minhao, director of Putuo.

“The development of AI can obtain better development opportunities and prospects in Putuo,” Zhou told officials from Saarland and German enterprises.

There are around 900 scientists, researchers and engineers at the center, who have made a large number of industry and technological breakthroughs in the last three decades.

Putuo has made intelligent manufacturing and robotics one of its key industry sectors, said Zhou.

The district has expanded its Changfeng Eco-Business District into the Shanghai Science and Technology Financial Industrial Park, the first of its kind in Shanghai.

The Putuo City Brain comprehensive management system can detect smoke from fire hazards, test the quality of waterways and automatically send alerts if any potential danger is detected.

It can help crack down on illegal structures and unlicensed night markets and prevent illegal posters and piles of items on stairways.

Tens of thousands of the Internet of Things devices, including sensors and monitors used in the public security, transportation, urban management, market supervision, urban image and sanitation sectors have been put in place across Putuo District.