How did a business street in Pudong become festooned with knit dolls?

Jinxiu Fun, a business street in Pudong New Area, became a celebrity spot after a short video clip showing all the handrails decorated by colorful knitting and dolls appeared online.

By the time the video went viral online, the decorations had already been removed because of the weather, but the curious keep coming.

The handrail decorations were the work of Mao Wan, a 30-year-old mother with two children, and 20 other mothers across the country. They knitted more than 500 dolls and weaving to adorn almost a kilometer of rails on one side of Jinxiu Fun.

“The others sent the dolls and knits to me and I sewed them to the handrails,” Mao said. “We used hundreds of kilograms of yarn.”

Thanks to the video, Mao has become a wanghong, or online celebrity.

Apart from the knit work, Mao hung handwritten signs on the rails, explaining that she started the project because of postnatal depression.

Mao conquered depression following the birth of her first child by taking up knitting.

She was 26 in 2015 when she gave birth. But the initial rapture soon became subsumed by severe anxiety.

“I couldn’t sleep at all,” Mao said, recalling the first couple of months after the baby was born. “I didn’t know how to be a mother and it freaked me out.”

Mao’s family urged her to take it easy after the birth, but her change in behavior set off no alarm bells.

“She was crying a lot,” said Mao’s sister. “She used to be a happy and outgoing person.”

Mao never sought professional help but shared her desperation with other first-time mothers in a WeChat group. One of them said her symptoms looked like postnatal depression, a condition that can affect 10-15 percent of new mothers and is characterized by sadness, changes in sleeping and eating patterns, low energy, anxiety and irritability.

“Some of the mothers had also been there,” said Mao. “They told me to do something that I can master, something that brings out a sense of self-fulfillment.”

Mao had enjoyed knitting since she was a teenager, so she picked up the needles again, hoping it would somehow distract her from the anxiety over her newborn. The treatment worked better than expected.

“I soon found I could focus on knitting for long periods of time,” said Mao. “And when I paused to check on my baby, I didn’t flinch anymore.”

She started sharing her knit works with other mothers on WeChat.

At the same time, the property management company of Jinxiu Fun was looking to make some changes in the block.

“My boss from Hong Kong told me she felt cold on winter days in Shanghai,” said Guo Hongxin, who works at the company. “She asked if we could do something that would make the block seem warmer.”

Guo said knit works on handrails are common in Hong Kong but finding volunteers to duplicate that in Shanghai might be difficult. It took Guo a year to latch onto Mao.

The yarn was provided by the company, and Mao called on the other mothers in her WeChat groups to join in the project.

“For a while, I was overwhelmed by the delivery boxes sent to me from all over China,” Mao said. “But when I opened them and saw the cute dolls, it always made me laugh.”

Mao, who lives 20 kilometers from Jinxiu Fun in Minhang District, started to weave the dolls and yarns onto the rails in October last year, by which time she was pregnant again.

A week after the work was done, Mao gave birth to her second child on January 1.

Almost half of Jinxiu Fun is host to educational institutions, so many children saw the dolls on the rails and expressed interest in learning to knit. Guo said a knitting class will be organized in the near future, with Mao as teacher.

“To be honest, I never sought so much public attention,” Mao told Shanghai Daily. “But if I can call more attention to the plight of those experiencing postnatal depression, I’m more than happy to continue doing it.”

With summer coming, Mao said she is changing tack.

“The rough idea is to decorate the walls of the block with knitting,” said Mao. “But we haven’t figured out a plan yet. But you can be sure it will be beautiful when completed.” 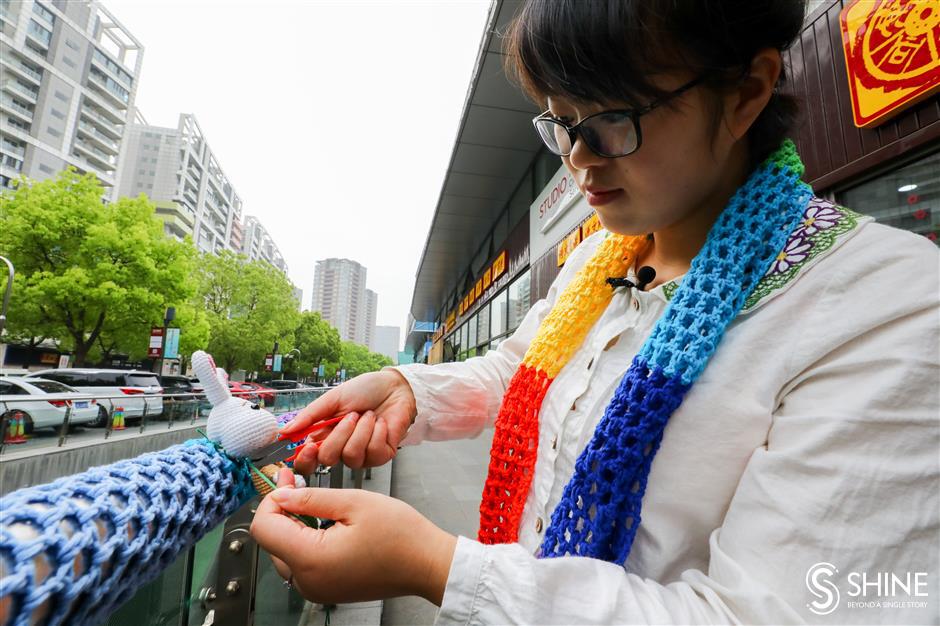 Mao Wan sews a doll to adorn the handrail of Jinxiu Fun in the Pudong New Area. 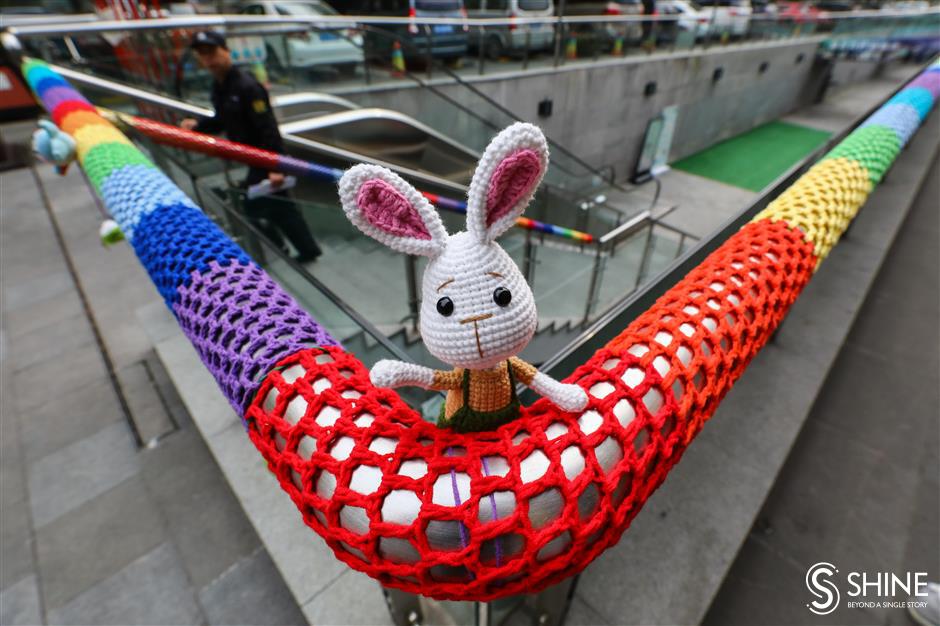 A rabbit doll on the handrail of Jinxiu Fun in Pudong