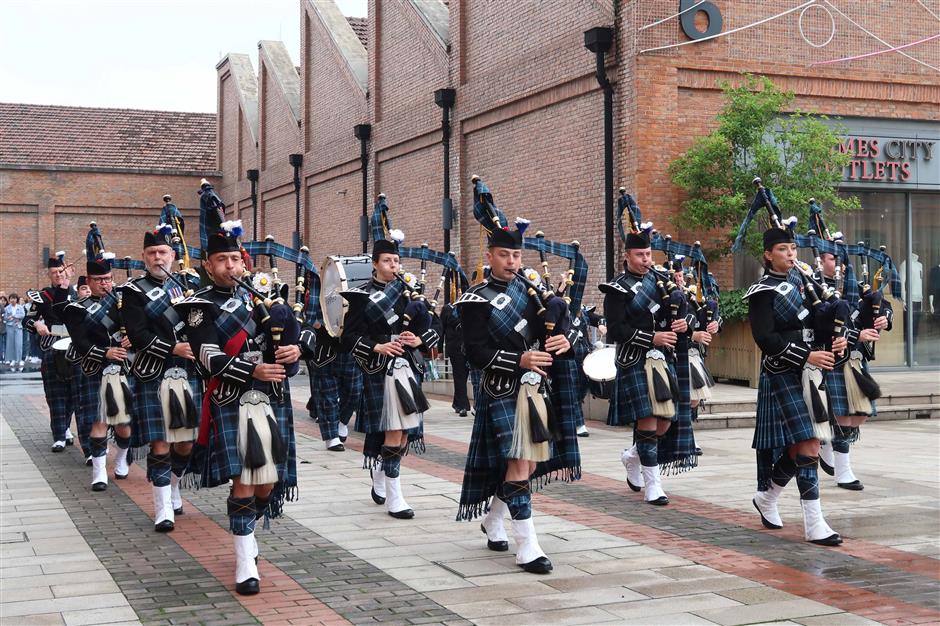 A pipe band brings "The Royal Edinburgh Military Tattoo" to Shanghai with a live performance at the Shanghai Fashion Center in Yangpu District.

The pipes and drums of "The Royal Edinburgh Military Tattoo" made their Shanghai debut on Tuesday for the inaugural show of the city's annual wind music festival.

Twenty pipers, drummers and fiddle players, along with Scottish highland dancers, entertained local residents on the waterfront of the Huangpu River in Yangpu District.

Hundreds of residents and tourists braved the drizzle to watch the performance which was presented along with music by six other wind bands from Malaysia, Japan and China.

More than 140 Chinese and overseas bands will perform during the weeklong Shanghai Spring International Wind Music Festival 2019 through May 4. The performances, mostly free, will be presented at local sports venues, shopping malls, campuses, community halls and on the Huangpu River waterfront.

A total of 8,500 performers will stage concerts and parades during the festival, which coincides with the four-day Labor Day holiday that begins on Wednesday.

Among the most anticipated bands, the traditional ensemble from Scotland will present another three performances through Saturday.

The band will parade along a newly opened waterfront section in Yangpu on Wednesday morning and play at the opening ceremony at Fudan University's Zhengda Indoor Stadium on Wednesday. Another show will be at the Andersen Paradise Amusement Park on Thursday.

"The performances have been designed to share our iconic traditional style. The musicians are joined by dancers who also show off a traditional Scottish dance style," said Lindsay Strachan, the show's assistant head of marketing. 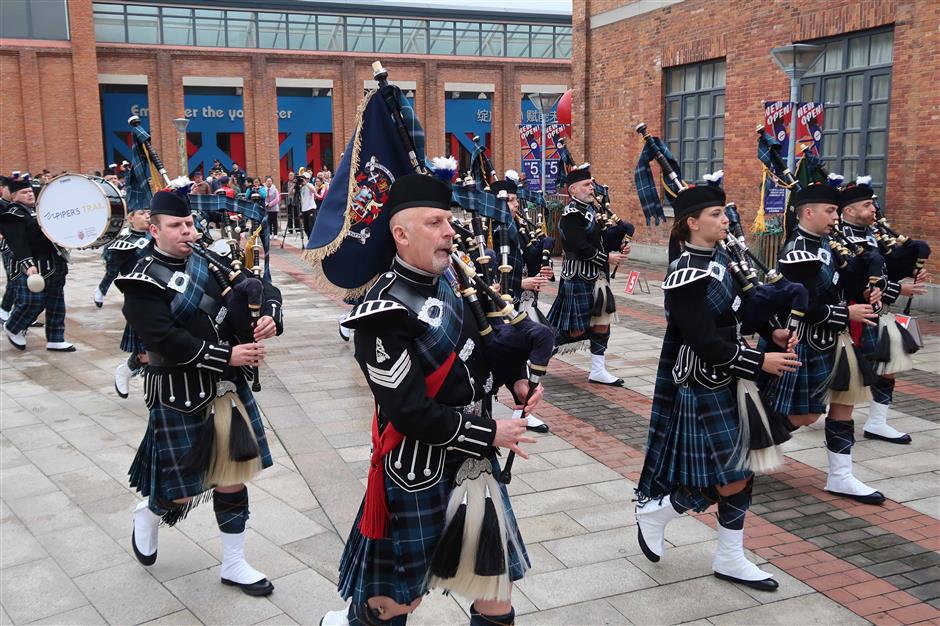 Pipers, drummers and fiddle players from "The Royal Edinburgh Military Tattoo" bring the music of Scotland to Shanghai in a debut performance for the city's annual wind music festival. 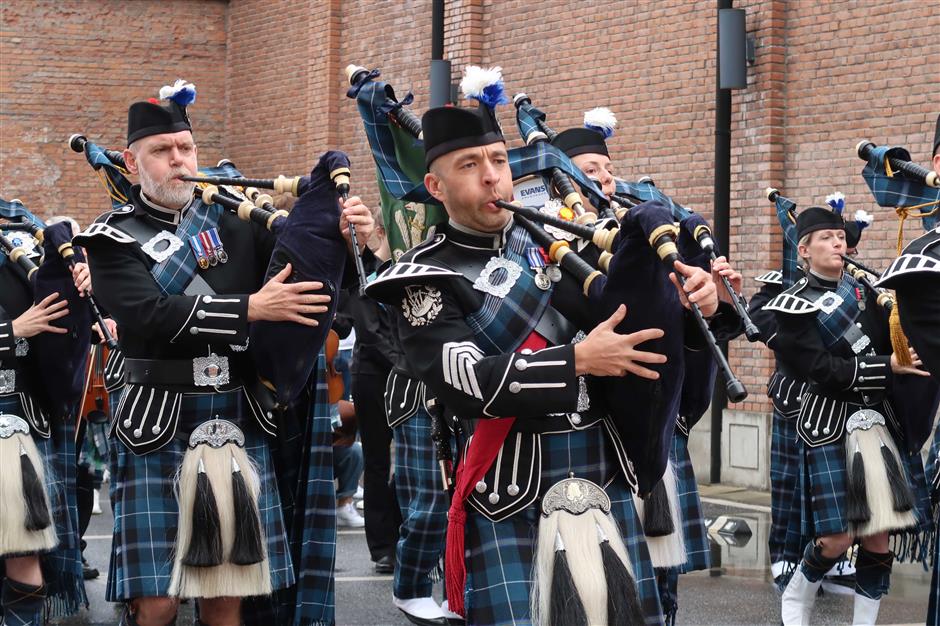 Pipers prepare to parade along the Huangpu River waterfront.

"The Tattoo" was created by the army in Scotland in 1950 and has become a world-renowned event, with 220,000 people each year enjoying the show on the iconic Edinburgh Castle Esplanade.

Piper Kenny Forsyth said he had been impressed by the audience.

"Shanghai audience are very polite and seemed to enjoy our first performance. They gave us a lovely applause," said the 52-year-old who has been playing since he was 9 years old.

"I heard that they were quite surprised about our act and that they had not seen the Scottish pipes and drums and Scottish fiddles before," Forsyth said.

Bagpipe is an ancient instrument, dating back thousands of years, and may of the band's instruments are many years old.

Forsyth's own pipes, for instance, date back over 100 years. The dense African blackwood they are made from gives them a warm and beautiful tone, he added.

"We are very proud to play this instrument for the very special audience in this wonderful city," he said.

Strachan said "The Tattoo" has established strong links with China. In 2015, the first Chinese band and dance group played at "The Tattoo" in Edinburgh, which helped increase ticket sales to Chinese visitors by over six times in 2016, she said.

To better serve Chinese viewers, "The Tattoo" has adopted WeChat Pay in its ticketing system, the first Scottish business to do so.

"Shanghai is world-renowned as a city that appreciates culture and music, so when we received the invite to perform at the wind music festival, we were very excited to accept," she told Shanghai Daily.

Strachan said due to the popularity among Chinese audiences, "The Tattoo" plans to present its full show in China which features 1,200 performers and acts from all over the world.

"We would be very proud to share this in China," she added.

The wind music festival, which has been held annually for 11 years, is part of the city’s artistic culture, said Yang Yinyu, director of the Yangpu District Culture Bureau, one of the organizers.

More than a million local people have enjoyed performances at the festival since 2008 — and some 50,000 musicians from 800 bands of 23 nations and regions have taken part, making it one of the biggest events of its kind in China, Yang said. 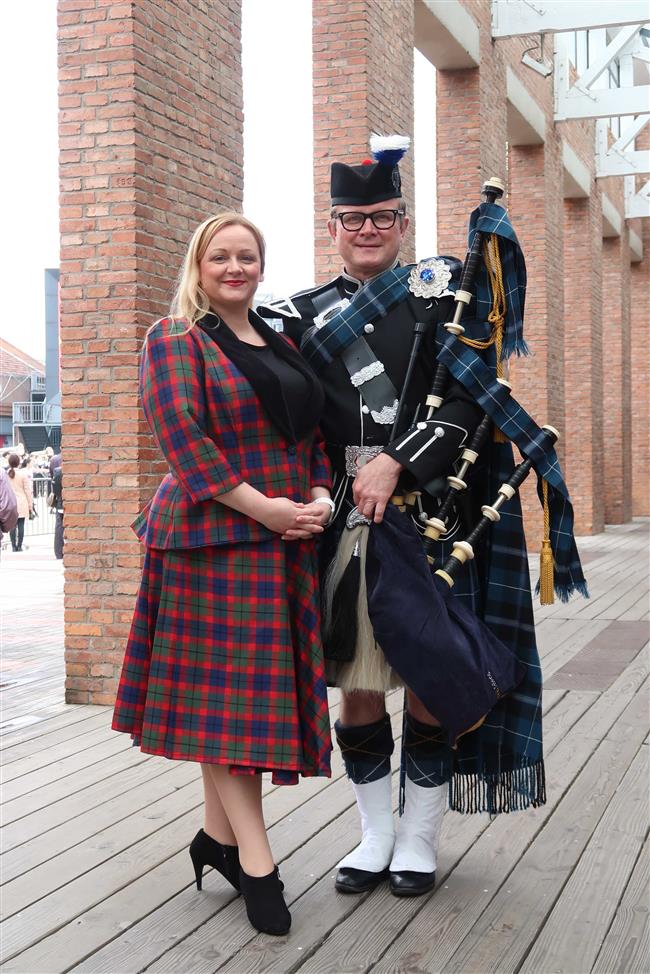