At the grassroots, people power flourishes 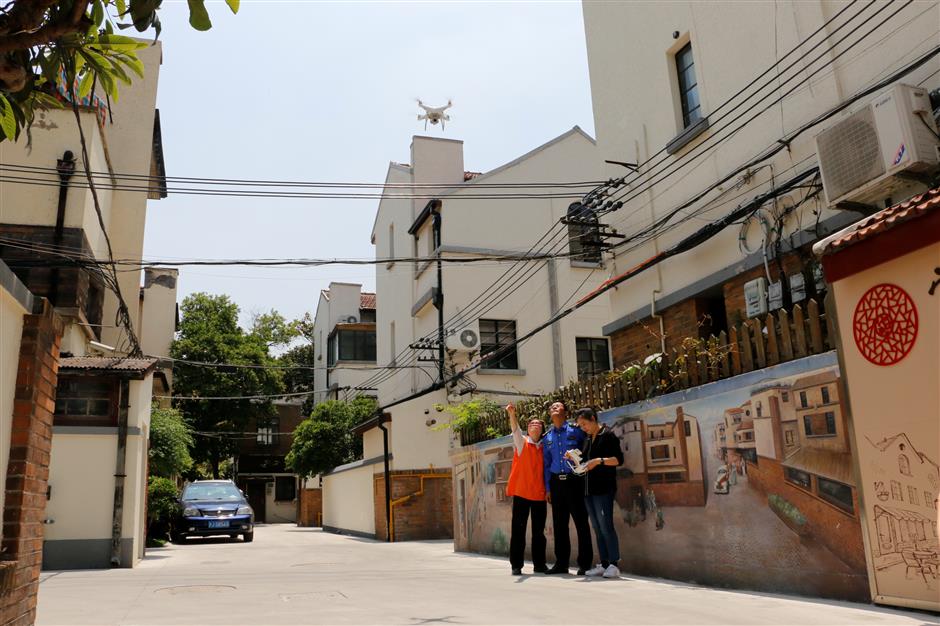 Jing’ansi is dotted with historical buildings under protected status.

About 85 percent of a 1.6-square-kilometer area bounded by Fumin, Changde, Zhenning, Changle and Xinzha roads, features more than 370 landmark structures.

Preserving historical buildings is no easy task, especially when they are inhabited. One concern is illegal structures that damage the original heritage of a building, but officials can’t just barge their way into an apartment if they get a tip about possible violations but have no direct proof.

So, local officials managed to let historic buildings speak for themselves. To date, the subdistrict has installed 885 sensors on the facades of 290 historic buildings. Each sensor is the size of two matchboxes and is connected to a big data analytics platform

Alerts are triggered if vibrations in a building are detected. Officials rush to check whether the alarms signal illegal construction or other violations

The subdistrict has also installed nearly 200 sensors on water meters of the homes of elderly living alone. By detecting daily water use, the sensors tell local officials whether anything abnormal has occurred. Officials pay visits if that happens.

In one case, an elderly woman living on Lane 361, Yuyuan Road, left home for two days to visit her grandson, but she failed to tell anyone. When sensors detected the absence of water use, officials showed up at the home. 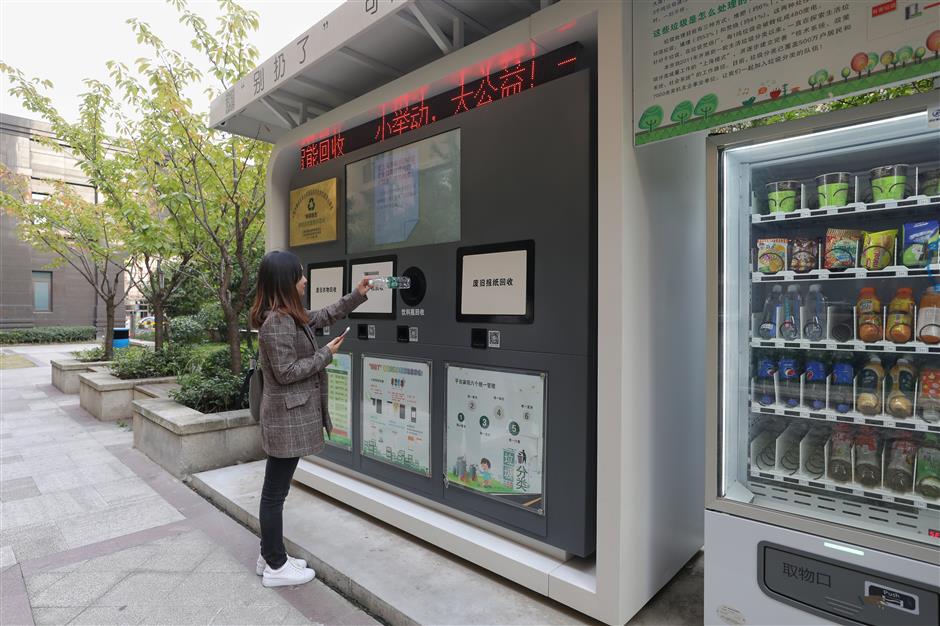 As Shanghai promotes measures to cope with volumes of urban garbage, the Jiangning Road subdistrict has taken a leading role, promoting waste sorting in residences and commercial complexes.

It’s often difficult to get residents interested in sorting waste, but the subdistrict has come up a clever strategy: get local residents involved and make them feel proud.

In the Haiguan Ercun residential complex, resident volunteers work in the garbage disposal room, teaching neighbors dispose of trash according to rubbish types. They also have turned the once messy, smelly garbage room into a “scenic spot” in the neighborhood.

On the shelves of the garbage room is a display of miniature models of city landmarks, such as the Oriental Pearl TV Tower and the Shanghai World Financial Tower.

The subdistrict also has a cluster of companies and eateries that are active in waste sorting.

The New Factories, an industrial park with nearly a third of its occupants foreign companies, sorts garbage and also has a machine to process kitchen scraps into organic fertilizer.

Currently, more than 600 kilograms of wet garbage are processed there every day, producing fertilizer for public garden areas.

The subdistrict also pioneered a “waste-recycling-by-app” service, which operates something like an online food-delivery service in reverse. The service has been expanded to several communities and offices.

With a tap of their phones, residents can make appointments for waste recyclers to come to their homes to pick up rubbish. They are paid for the trash, with money remitted to their Alipay accounts.

A vexing problem in downtown Shanghai are old low-rise buildings constructed without elevators over the decades. As populations aged, navigating stairways impeded many frail senior citizens from going outside.

Residents in subdistrict’s Xinfukangli, a large residential complex, proposed to install elevator in 2015, with all residents sharing the cost.

But the project was too costly back then, and the application process was too complicated, requiring visits to multiple departments and long waiting times for a result. Also, people living on the lower floors were unenthusiastic about paying for an amenity that was pretty useless to them.

Local officials persisted. They spent a lot of time to talk to residents, and the district government later simplified the application process. Subsidies are available to help defray the cost.

The No. 96 building was the first to have an elevator installed in March 2018. Now, residents in the other 21 buildings are at various stages of plans to install elevators. 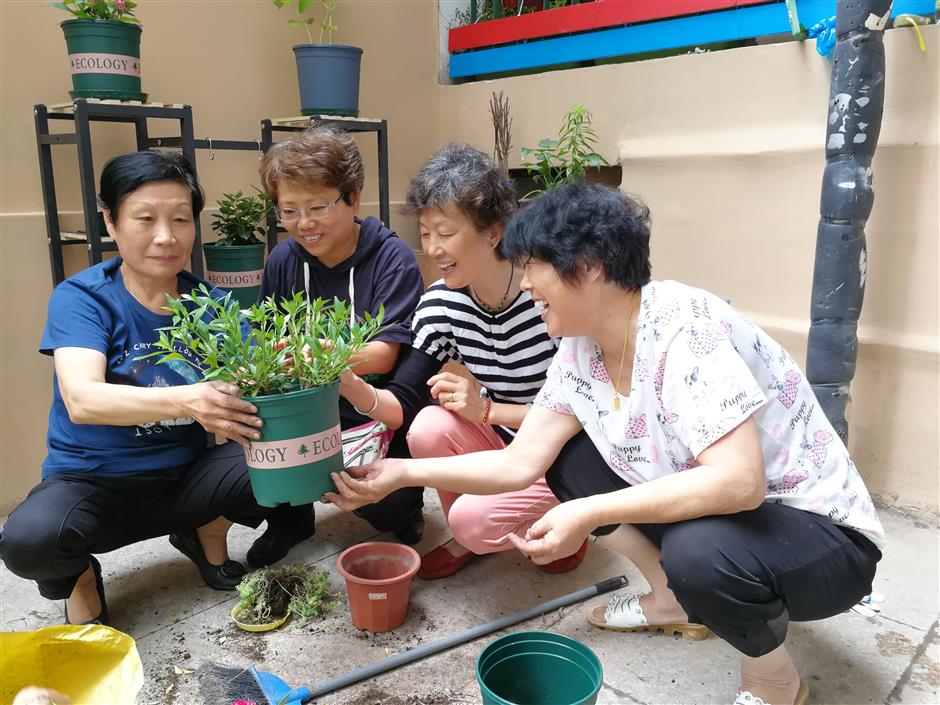 The subdistrict has many old residences and has initiated several “micro-renovation” projects to improve the environment and living conditions.

In an abandoned area, local officials had placed fitness equipment for residents to use. However, due to lack of management, the area became a parking lot for a jumble of bikes and mopeds. Piles of bikes in various states of disrepair were also left in corridors or lined up along walls.

The environment worsened as some residents dumped waste there, emitting odors and attracting flies.

First, local officials tried to remove the bikes, but they always returned. So, after feedback from residents, the officials launched a project in 2018 to clear out the bikes and add benches to the area. It became, in essence, a public living room.

Local residents were even invited to paint on the walls.

The Taoci building, built in the 1990s, is another example.

The old residential building has a terrace on the second floor, which was piled with junk. Residents complained that the environment was bad and said some greenery would brighten the place.

So, the terrace was turned into a garden. With the junk removed, residents were invited to plant whatever they liked. Photos were posted, recording their time spent in the garden. The project not only improved the environment, but also created a new sense of community spirit. 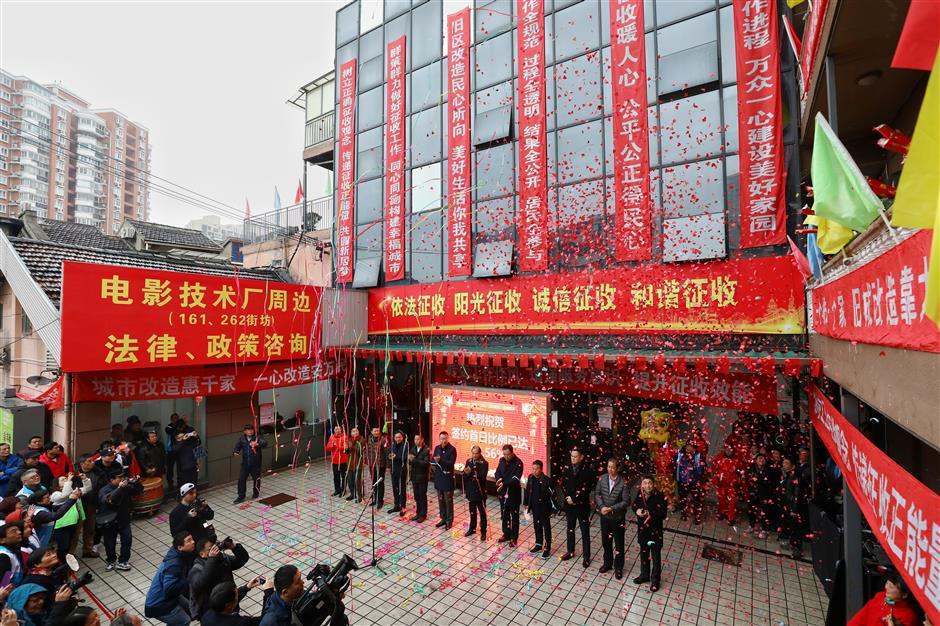 The Baoshan Road subdistrict has many old communities, where residents share toilets and kitchens. Earlier this year, about 5,700 residents living in an old community bounded by Baoxing, Baotong, Zhongxing and Zhijiang roads, finally waved goodbye to the unpleasant living conditions of the past under a renovation project.

In the community, most of the buildings are old shikumen, and the area abounds with unlicensed, jerry-built structures. Every year during the flood season, residents had to be evacuated to ensure their safety.

For the community renovation project, more than 50 companies, including the old Shanghai Film Technology Factory, had to be relocated.

Local officials said the old works may be preserved, and the site will be renovated and upgraded to a modern facility or perhaps turned to a museum of the history of the film- processing industry. 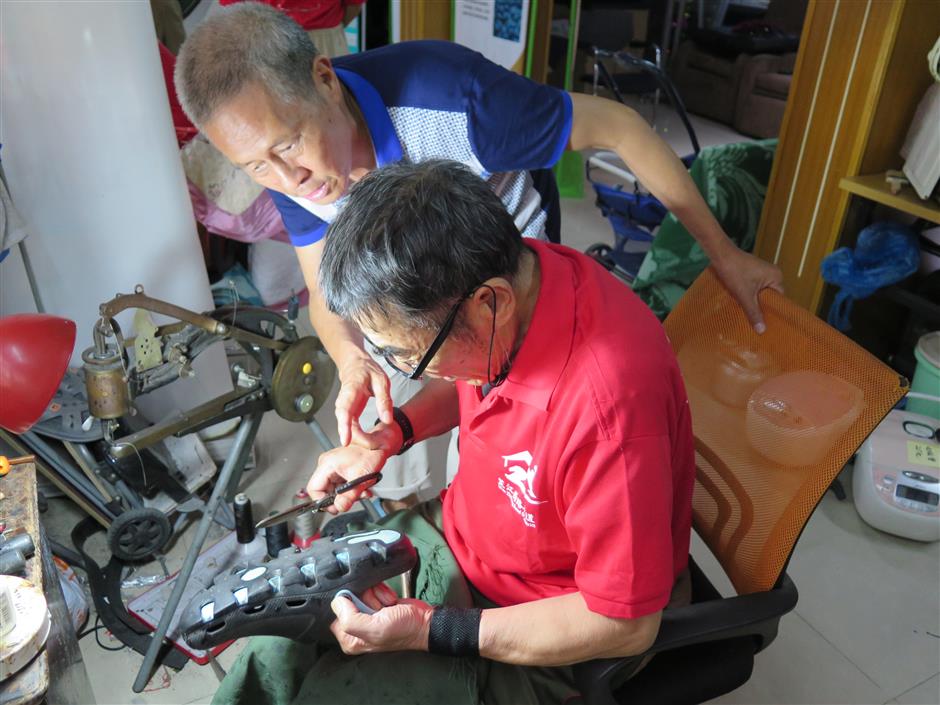 Sheng Ruilan is actually a resident in the subdistrict. Though he is more than 70 years old, he is young in spirit. He volunteered to repair broken radios, TVs and other small appliances in neighbors’ homes. He is called “Big Brother” by residents.

Shen said in most cases it’s easy to make repairs by just changing a few parts. It was too difficult for many residents to report small repair needs to the neighborhood committee and then wait for repairmen to appear.

It was especially hard for the elderly who were frail or live alone. Shen proved a godsend to them.

As word of his volunteer work spread, local officials proposed to set up a maintenance crew named after him. He agreed, and thus the Sheng Ruilan Office was set up.

According to officials, the problems of residents were solved by residents, and that has created positive energy in the community. 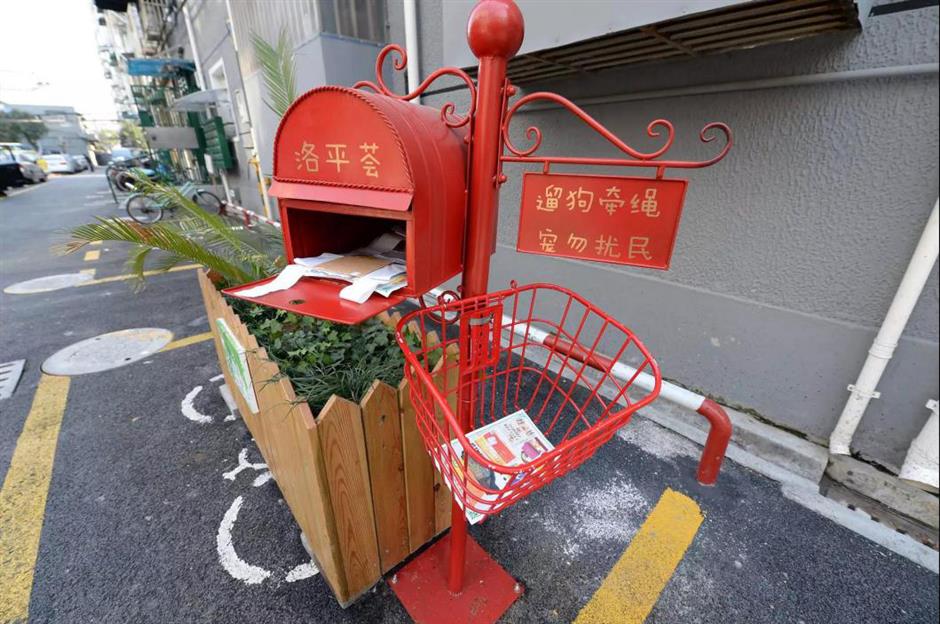 Junk littering neighborhoods is an eyesore and a big headache for residential committees. The Luoping community in the Gonghexin Road subdistrict has managed to turn trash into treasure.

Local officials now encourage residents to exchange disused but recyclable items for coupons to buy daily necessities. In two years, they have collected more than 250 abandoned bikes and old furniture that used to pile up in corridors. The recyclables have been used to decorate the community.

Old bikes and tires were turned into art installations, colorfully painted by local residents. One installation made from a bike basket and a mailbox to create a spot where residents can pick up newspapers to read. The fixture bears a plaque that reads: “Tether your dog when you walk him.” 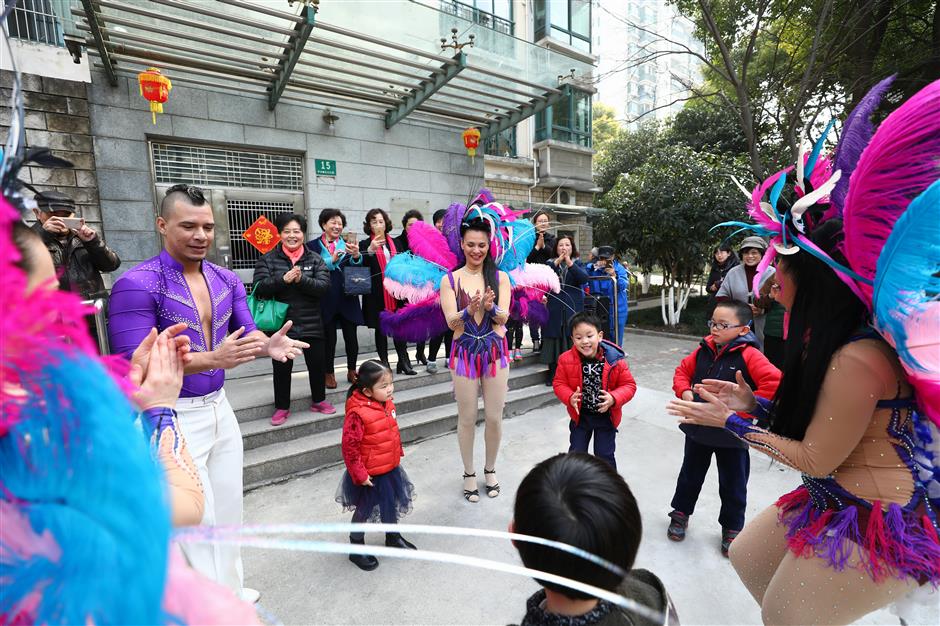 Keywords: cultural activities at the doorstep

More than 150,000 residents in Pengpu Town have enjoyed a variety of new activities right in the local community, thanks to an initiative of the local government.

Shows ranging from folk dances to Huju opera, popular among local residents, are staged around local neighborhoods on a regular basis.

Residents are also offered local classes in embroidery, knitting and painting. Some are taught by renowned folk artists.

“Previously, I needed to take a bus and then walk to the town's cultural activities center to watch a Huju opera show," said an elderly resident surnamed Lu. "Now, I just need to go downstairs."

Also, the town has placed grassroots cultural centers in neighborhoods.

The one in the Luyuan neighborhood has held a variety of cultural activities, some involving expats. For example, foreign students were invited to participate in the traditional Chinese Lantern Festival, with samba dancers from Brazil performing at the event. Local residents showed overseas students how to make the favorite holiday snack tangyuan, or glutinous rice balls with sweet or salty fillings. To add some exotic flavor, they even tried replacing the traditional sesame paste filling with chocolate.