The emperor, the commoner and the goby fish 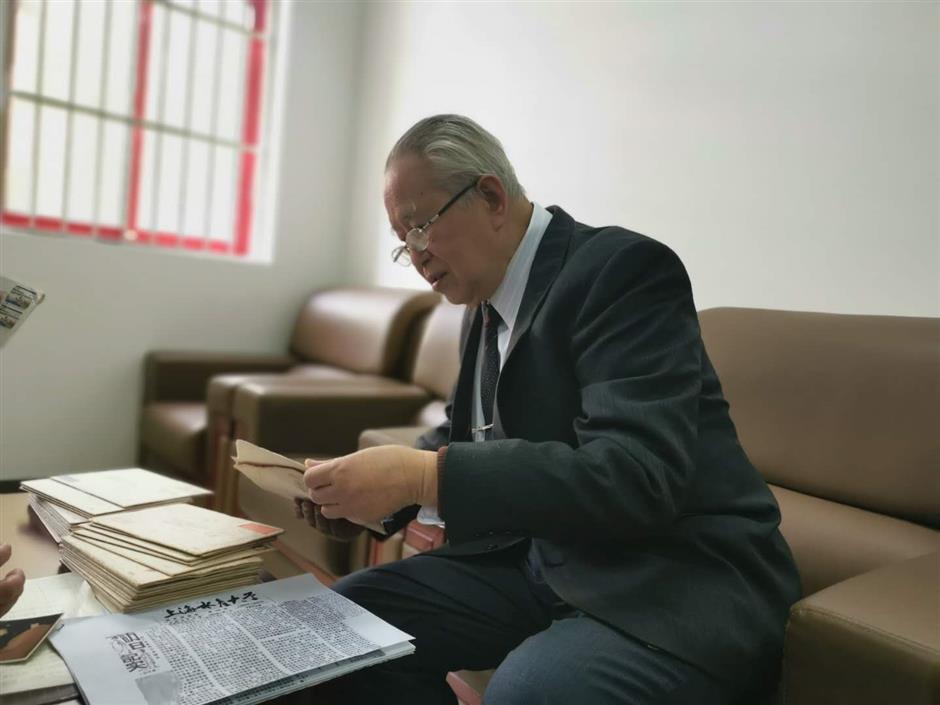 Japan’s former Emperor Akihito, who abdicated on Tuesday, is expected to have more time to indulge in his long-time interest in ichthyology, the branch of zoology that deals with fish.

Since 1964, the emperor has published 33 scientific papers on fish and is considered an expert on the goby fish.

“He is meticulous and excels in science, but he is also very modest and amiable. He wishes others to treat him just as a scientist,” said Wu Hanlin, 85, a retired professor from Shanghai Ocean University who has had a friendship with Akihito for about 40 years.

A species of goby is named Exyrias akihito in honor of the emperor.

The friendship between Akihito and Wu dates back to late 1970s, when the former was still the crown prince of Japan.

At that time, Wu was working at the Xiamen Fisheries College, which was directed by Fujian Province to investigate and catalog local fishery resources. Wu was put in charge of studying goby, a common name for many species of small- to medium-sized ray-finned fish that normally have large heads and tapered bodies with ventral fins forming sucker. They are found in both marine and freshwater environments.

Research on the goby was a blank in China, so Wu had to turn to international academic publications for help. Noticing a Japanese named Akihito who was publishing papers on the subject, Wu wrote to him seeking advice in 1979.

“I approached him as a leading expert on goby fish and had no idea that he was a prince,” said Wu.

About two weeks later, Wu received a reply in which the prince not only answered Wu’s questions about classification of goby fishes but also expressed a wish to strengthen contact.

Thus, the two began communicating by letters, exchanging specimens and research reports. Akihito also sent Wu New Year greeting cards every year, which included a picture of the emperor and his family.

About 10 years after the first letter, the two had their first meeting.

In March 1989, about two months after Akihito ascended the throne, Wu visited Japan at the invitation of Tokyo University and a Japanese fishery association. During his 50-day stay, he visited the Akasaka Estate, where Akihito then lived, three times.

“I still clearly remember our first meeting,” Wu recalled. “He was standing in the middle of his office, waiting for me. After shaking hands and being seated, he asked me many questions about China’s research on marine fish, and I confessed there was actually little research on the subject. To my surprise, he opened his goby specimen room to me and allowed me to do research for two weeks in his lab.”

One day when Wu was working in the lab, Akihito came to him and told him that he had invented a way to dye the cheek mastoids of goby fish—injecting colored ethyl into the cheeks with very thin syringe to observe the arrangement of sensory papillae.

Akihito asked his assistants to teach Wu the new approach, and before Wu left, the emperor gave him a large batch of syringes and dyes, which were difficult to find in China at that time.

“I used those materials for almost 20 years, until my book ‘FAUNA SINICA Ostichthyes Perciformes (V) Gobioidei’ was published,” said Wu.

In 1990, Akihito had 62 goby specimens delivered to Wu for him to conduct research and compile his book. Some of the goby he sent existed only in Japan and were thus very precious. 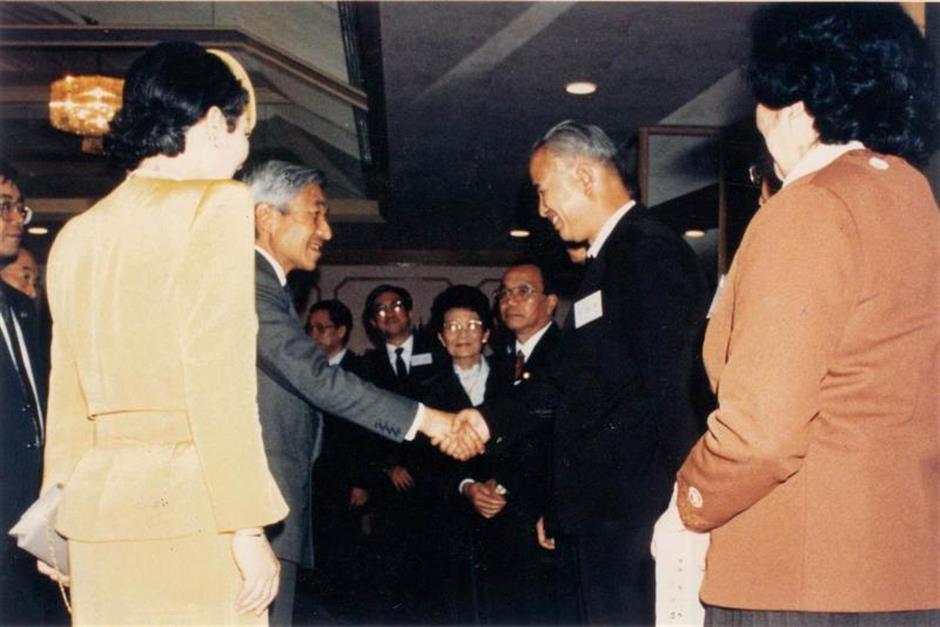 Akihito shook hands with Wu in Shanghai when he first visited China in 1992.

In 1995, Wu visited Japan again and was invited to spend 60 days on goby research in the Biological Laboratory of the Imperial Household. His office was beside Akihito’s, and he frequently observed that the emperor worked hard.

“On the last day of my work there, the emperor met me in his residence,” Wu said. “He told me that China is a good place for goby research because it has large areas of freshwater and complicated terrains. He suggested China and Japan should enhance cooperation in research on goby fish.”

It was already evening when their meeting ended, and Akihito personally escorted Wu outside.

“When we were walking in the corridor, he asked about my elder son, who was studying at Mie University for a master’s degree, and he offered to help if necessary. I was really touched,” said Wu.

Wu came to regard the emperor as a good friend. When he learned that Akihito loved pidan, or preserved eggs, he brought him a box of the eggs every time they met.

During the conversations, the emperor also revealed that he loved Chinese food, especially fried rice.

At their last meeting in 2009, also the 12th in the past 40 years, Wu presented the emperor with a copy of his book “FAUNA SINICA Ostichthyes Perciformes (V) Gobioidei.”

“The emperor had kept a watchful eye on my work on the book and had helped me a lot,” Wu said. “It is a model of cooperation in scientific research between China and Japan.”

Wu said Akihito will have more time to indulge in his passion for marine science after stepping down from the throne.

“It might be more convenient for us to communicate with each other after his resignation,” Wu said. “I wish him good health and everlasting friendship between Chinese and Japanese.” 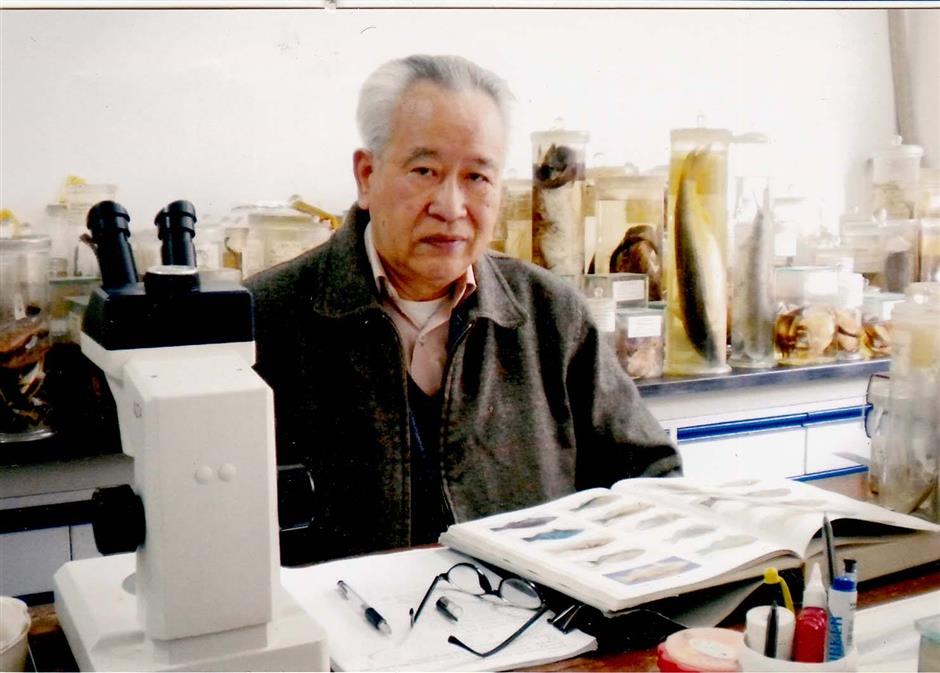 Wu at his lab