A decade of shining light on science

The Shanghai Synchrotron Radiation Facility, known as the “Shanghai light source,” is expected to have 35 working beamlines and 60 experimental stations by the end of 2022, able to accept tens of thousands of users a year.

The facility is the core of a cluster of infrastructure facilities being built at the Zhangjiang Science City in the Pudong New Area.

The cluster, with an investment of nearly 13.8 billion yuan (US$2 billion), is expected to have eight facilities, including a hard X-ray facility and a proton therapy center, in use by the end of 2025.

“It will form a photon science center with global influence,” said Zhao Zhentang, director of the facility, at a forum on Monday to celebrate the facility’s 10th anniversary.

Featuring a giant nautilus-shaped structure, it opened its doors to scientists on May 6, 2009.

It uses "synchrotrons radiation" technology, by which electrons move in a circle and emit electromagnetic waves in a wide range of frequencies to create beams that are hundreds of millions of times brighter than a normal X-ray.

It’s like a super X-ray machine and super microscope, allowing researchers to discern the structure of a virus, a protein and even an atom.

The facility now has 15 beamlines and 19 experimental stations. On average, it supplies light for laboratory use of nearly 5,500 hours per year. However, that is still far from satisfying demand. 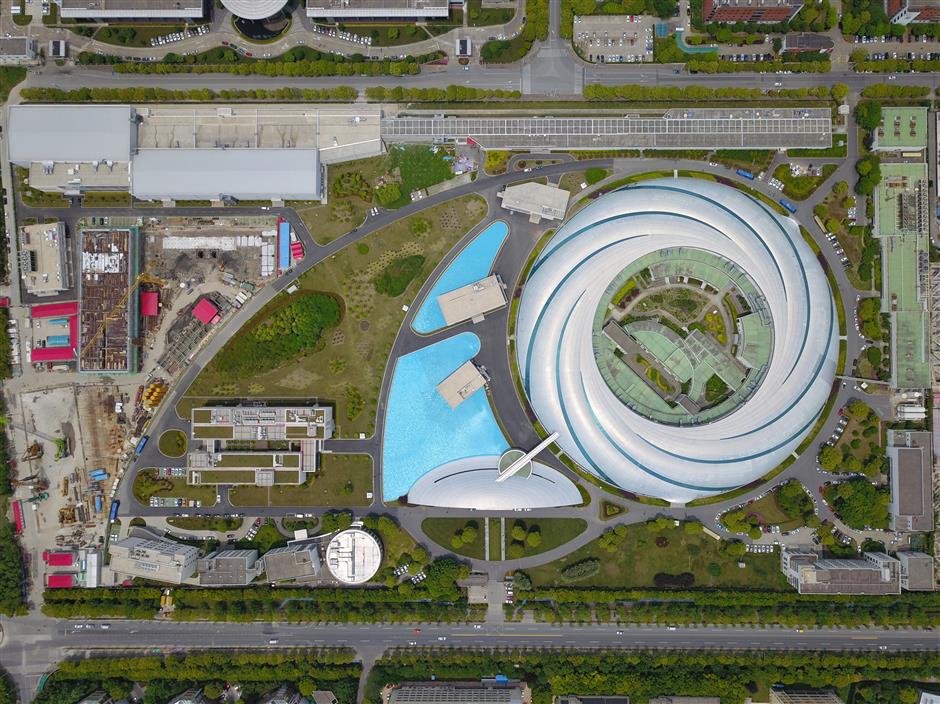 Featuring a giant nautilus-shaped structure, the Shanghai Synchrotron Radiation Facility opened its doors to scientists in 2009.

“Only about one-fourth of the demands is satisfied,” said Zhao. “Initially, we had just thought there were only up to 300 users per year. But the number of users has risen dramatically.”

The facility is currently the nation’s biggest scientific facility and the biggest platform for scientific research and technological development.

By the end of April this year, it had been used by nearly 25,000 researchers in about 13,000 projects in fields such as life sciences, new materials research, environmental sciences, medicine and pharmacy, information technology and archeology.

Nearly 80 percent of users are university students with the rest from companies, hospitals, research institutes and other bodies.

It has nearly 100 foreign users from 16 countries, including the United States, Australia and Japan.

Before the facility, the third generation of its kind, was built, China only had two light sources, a first-generation one in Beijing and a second-generation one in Hefei, Anhui Province. But both are too old to meet the demands of today’s scientists.

In the past 10 years, scientists have made a great many breakthroughs, including insights into fatal diseases such as H1N1 swine flu, repairing valuable antiques in the Palace Museum in Beijing and inventing new materials used in high-speed trains.

Among more than 20 third-generation synchrotron radiation facilities worldwide, Shanghai facility has an outstanding performance in number of users and achievements, Zhao said. 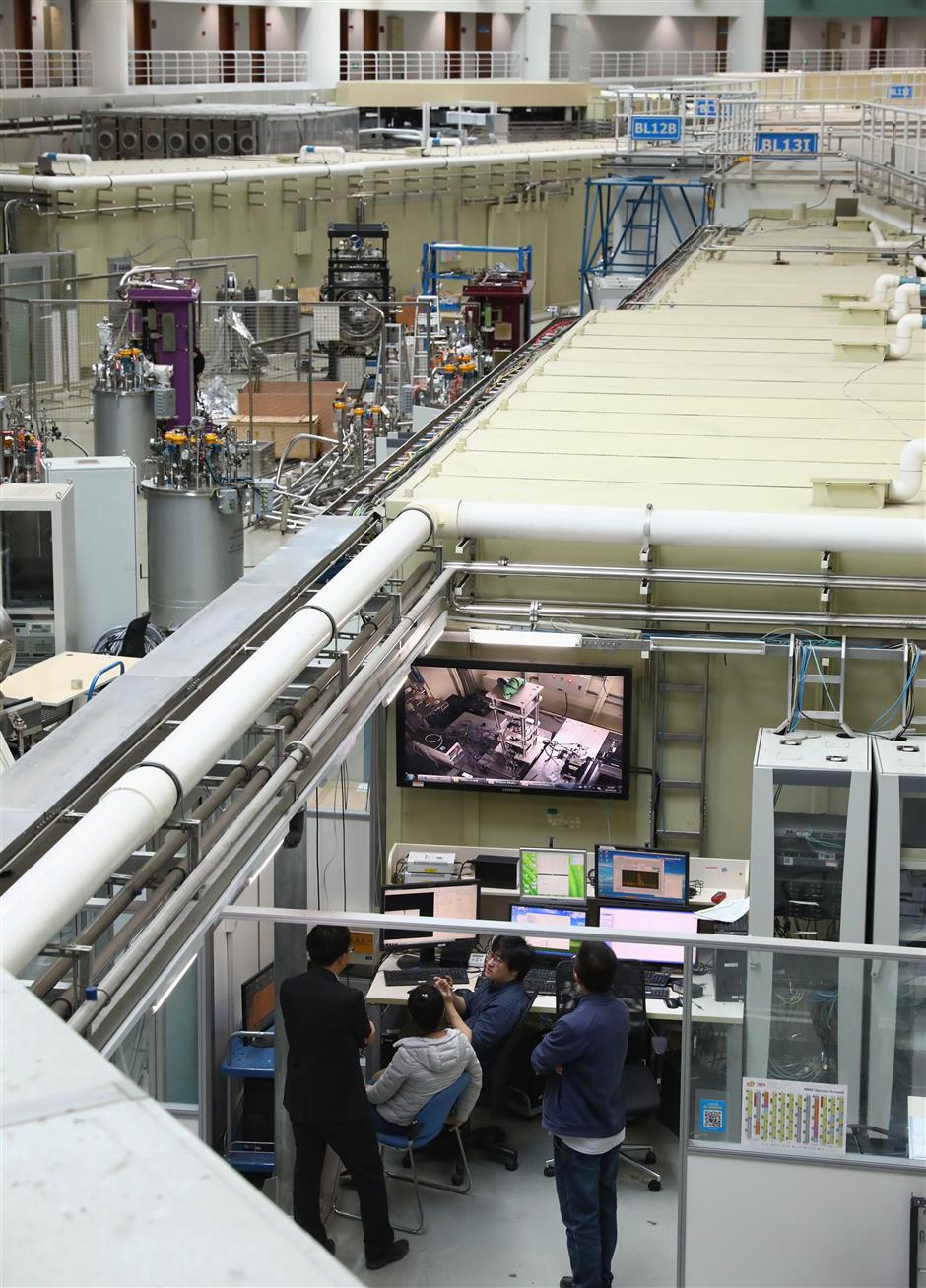 Researchers at work at one of the facilities labs

One major breakthrough, Zhao said, was in the field of structural biology. In the 10 years before the facility was built, domestic scientists only decoded the crystal structure of 99 proteins. However, in the last decade, that rocketed to 3,775.

Among other achievements, scientists have used the facility to destructure H1N1 swine flu and discovered that H1N1's HA gene was similar to the 1918 flu, which explained why the young were more vulnerable to the virus instead of the elderly during the epidemic in 2009.

On Monday, Liu Jingxian and his research team from Shanghai-based ChemPartner spent four hours in one of the labs at the facility to analyze the crystal structure of a protein, which can be used to develop new drugs.

“We were one of the first batch of users of the facility back to 2009,” Liu told Shanghai Daily. “Our company is also based in Zhangjiang. We use the lab about two to four hours every month. By using the facility, we have designed nearly 100 drugs to treat tumors, immune system diseases and others in the last 10 years.”

He said that before the Shanghai facility was built, they had to fly to Australia to carry out experiments, which cost time and money.

“Here in Shanghai, we pay 2,500 yuan for one-hour use,” he said. “The Australian facility charged us much more. And we had to spent extra fees on packaging and transporting our equipment, which cost US$1,500-3,000 each time.”

The facility has also cooperated with the Palace Museum to establish a joint lab. The two have made achievements in exploring the micro-structure of purple gold glaze used in the period of Emperor Qianlong in the Qing Dynasty (1644-1911) and glass items discovered in an ancient cemetery along the ancient Silk Road. 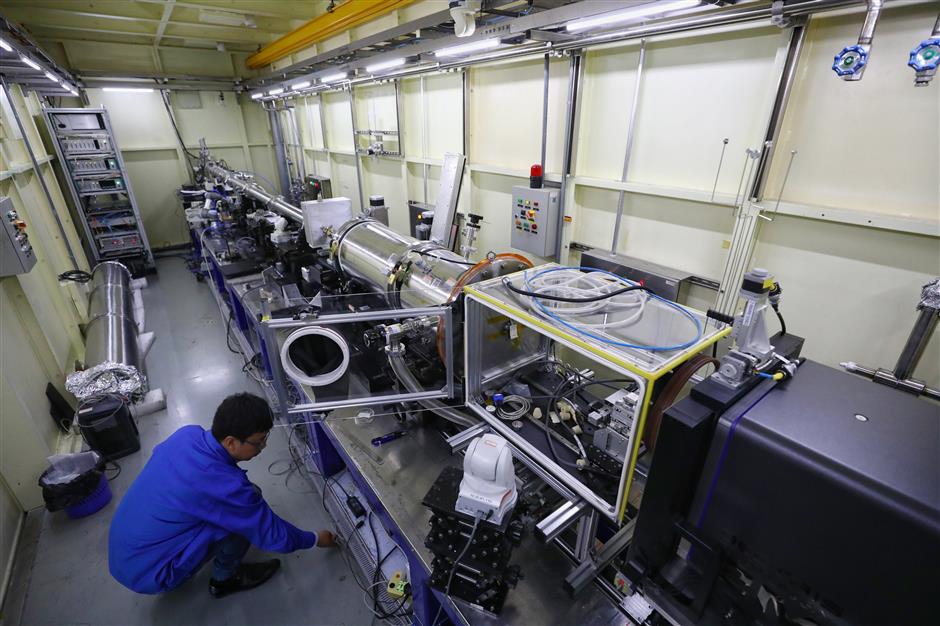 A worker at the Shanghai Synchrotron Radiation Facility adjusts equipment for researchers about to carry out experiments.