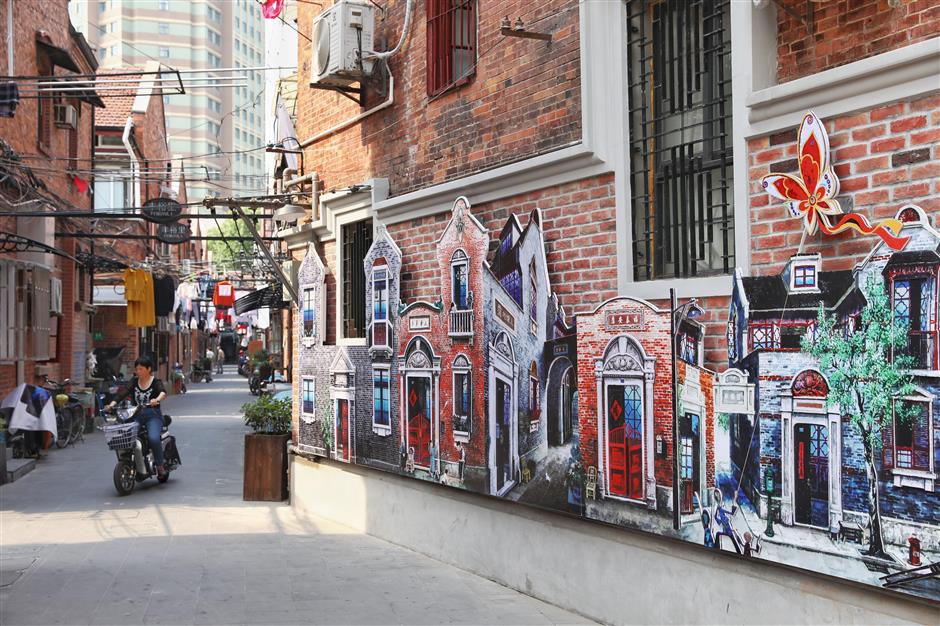 A 10-meter-long fresco about the city’s various unique shikumen, or stone-gate buildings, decorates the Fengyuli neighborhood in Huangpu District.

Paintings, frescoes and paper-cutting patterns about traditional Shanghai lifestyles are being used to adorn downtown historical shikumen neighborhoods in a new effort to improve the environment and cultural ambiance.

A 10-meter-long fresco about the city’s various unique shikumen, or stone-gate buildings, and a dozen paintings about traditional lifestyles in the buildings have been created for the Fengyuli neighborhood, which means "harvest and rich," built in 1928 near Xintiandi in Huangpu District.

The paintings were created by local artist Li Shoubai, who is famous for paper-cutting and works on shikumen lanes and people's lives.

The practice will be promoted to other nearby shikumen neighborhoods after an ongoing round of renovations to improve the environment and living standards for the inhabitants, according to the district government.

The red bricks of the 15 stone-gate townhouses have been washed. The rugged concrete pavement has been repaved with anti-slip tiles.

Plantation boxes and chairs have been installed. Uniform awnings and laundry racks have been built to protect the structure and historical ambiance.

A public bathroom with shared washing machines has been built in a vacant apartment for the convenience of households who do not have separate bathrooms.

In the final step, overhead cables will be buried underground to complete the renovation project. 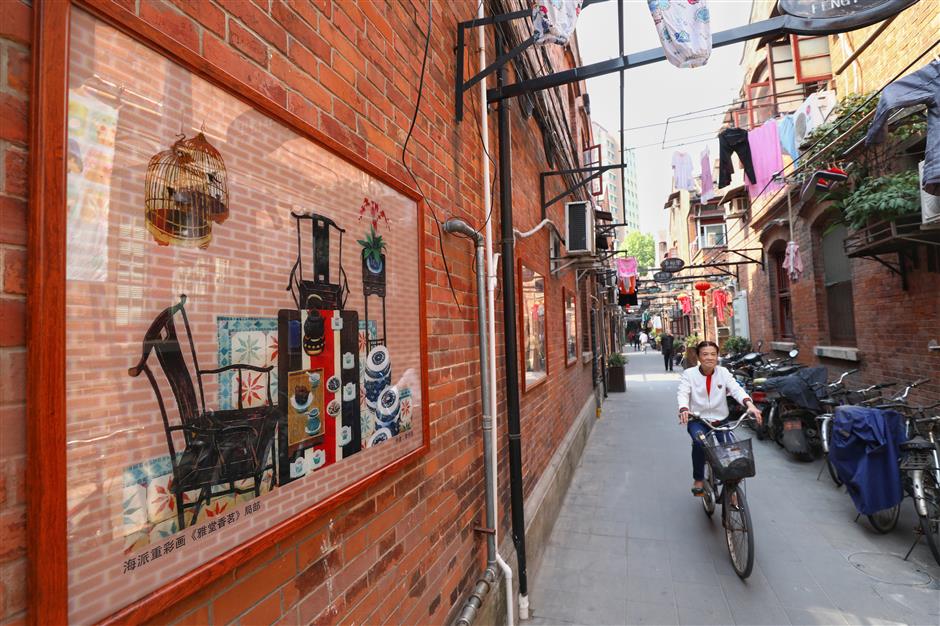 Over a dozen paintings about the traditional local lifestyle adorn the Fengyuli neighborhood.

"Though the facilities had been improved, the old neighborhood was short of cultural atmosphere," said Wang Jiaqi, Party secretary of the Fuxi neighborhood committee in charge of the area.

The subdistrict invited Li to pay several visits to the historical neighborhood and create artworks for residents and to let visitors learn about the city's vanishing traditional lifestyles.

In one of the paintings, a woman in qipao feeds her children on a round table with local dishes. Another painting shows a rickshaw, once a major mode of transport in the city, in front of a stone-gate building.

Traditional games played in old lanes half a century ago are shown in paper-cutting patterns created by Li. The games include hopscotch, hoop-rolling and ring-tossing.

At night, the paintings and the fresco are illuminated to become innovative lamps for the lane, said Wang.

At 95, Chen Dingfang is the oldest original resident in the neighborhood. The former head of the city's bicycle chain factory has been living in Fengyuli since it was built.

"I witnessed all the changes of the neighborhood, but it never looks so beautiful like today," Chen said. He spends most of time sitting outside in his wheelchair to greet passers-by and enjoy the sunshine. 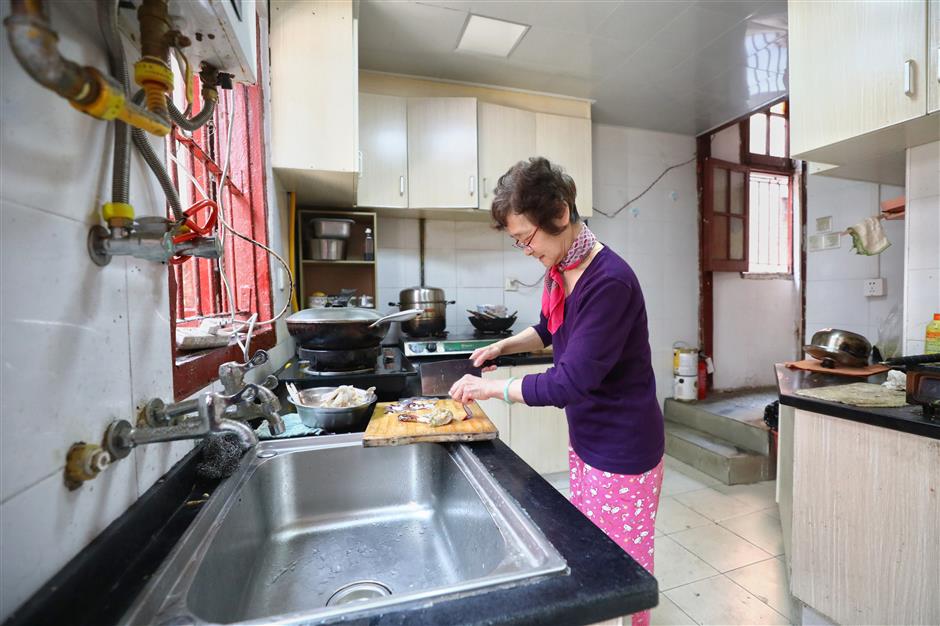 A resident prepares a meal in a renovated public kitchen in the Fengyuli neighborhood.

His neighbor Chen Nengkang, 74, who was born in the neighborhood, said the living environment had been greatly improved compared with several years ago.

The neighborhood was once filled with garbage scattered on the ground and illegal structures. Quarrels were often triggered among neighbors on the sharing of public kitchens and sinks, he said.

"The facilities have been renovated while the neighborhood looks beautiful with these paintings," he said. "I don't want to get relocated, but to enjoy both the ideal downtown location and the pleasant living environment."

Many residents who used to rent out their apartments began moving back after the facelift campaign. Several households are also redecorating their homes, said Wang.

A resident surnamed Cao who was also born in the neighborhood said she prefers living in the cramped old house now to the previous apartment she rented in Minhang District.

"I can chat with old neighbors. The hospital and park are just several minutes away," Cao said.

According to the renovation plan, several nearby lane-style neighborhoods such as the Paris Court where translator Fu Lei (1908-66), or Fou Lei known by Western readers, once lived and the Yongfengcun, which means Forever Harvest Village, will be renovated this year.

Public opinions will be solicited on whether to adorn the neighborhoods with these paintings and artworks, according to the subdistrict. 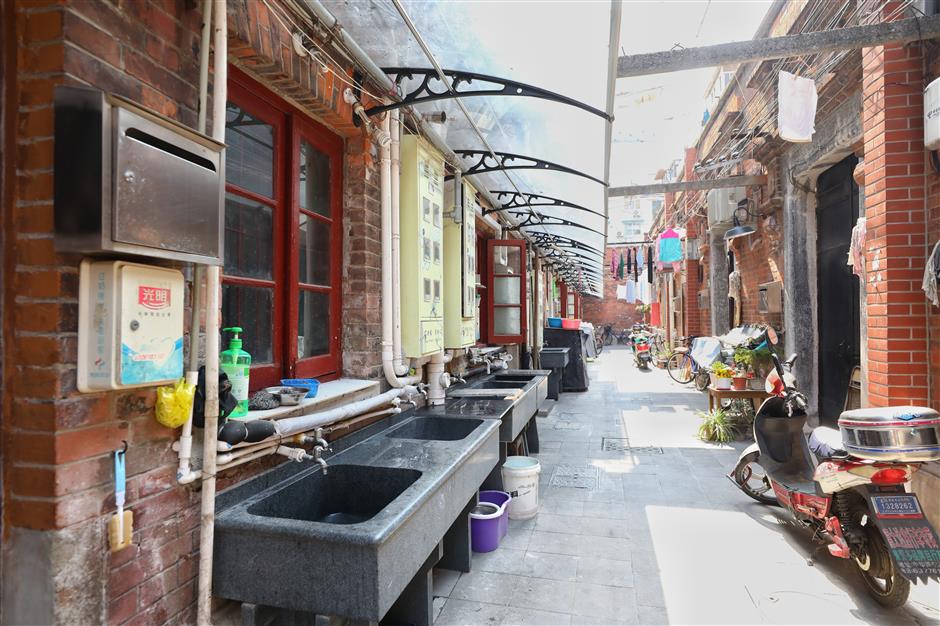 Uniform awnings and sinks have been built to protect the structure and historical ambiance in the Fengyuli neighborhood. 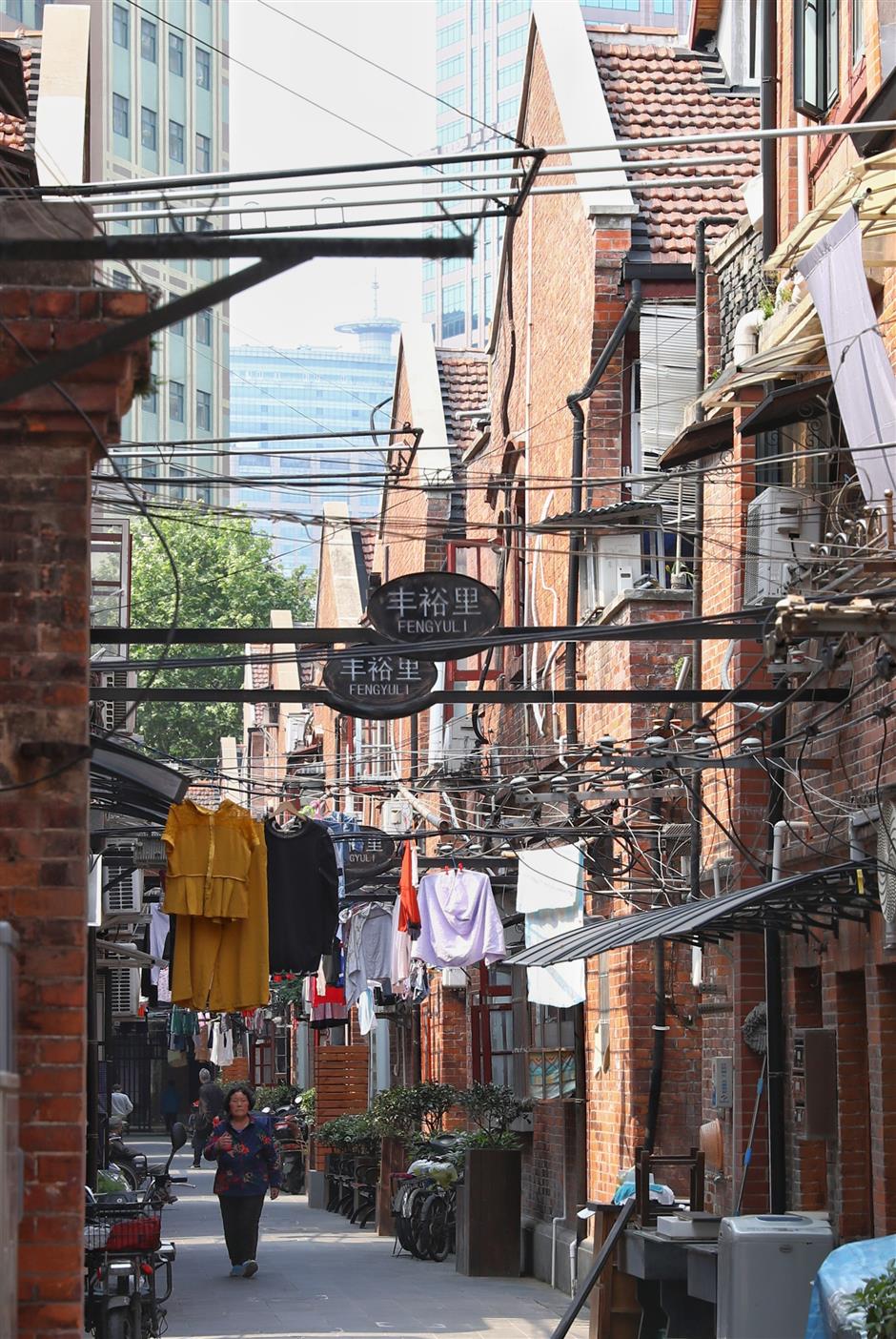 Uniform laundry racks have been built in the Fengyuli neighborhood.