The people and projects elevating our prominence in science

Asia's biggest radio telescope, a paradigm for future megacities and cutting-edge cancer treatment are among the innovations honored on Wednesday with Shanghai Science and Technology Awards.

Biomedicine is the top winner this year, garnering about a quarter of top prizes and scooping up almost 18 percent of all awards.

The city has created a mature industrial chain in biomedicine, supported by its manufacturing industry and medical services, according to the Shanghai Science and Technology Awards Center.

Information technology, aerospace engineering and construction are among other notable winners.

Of the awarded projects, 111 involve out-of-town scientists, institutes and companies.

Chang Shu Ting, an Australian-Chinese biologist who introduced different mushrooms to China over the last 40 years, was honored for his contribution to international science and technological cooperation.

There are two winners of special awards: one involves the design of the Tianma Telescope: the other, the construction of Shanghai Tower. 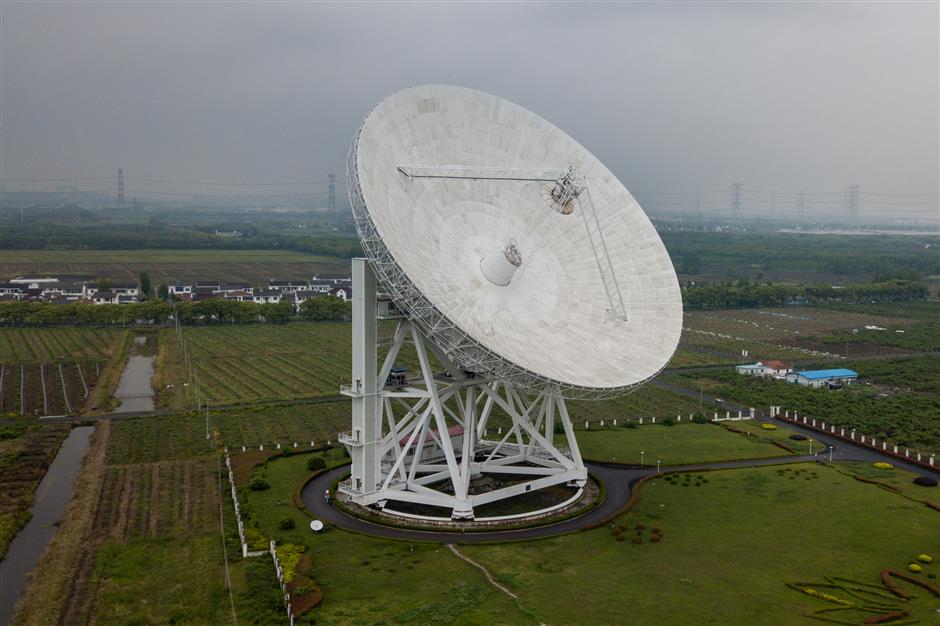 The Tianma Telescope, as large as eight basketball courts, with a diameter of 65 meters and a height of 70 meters, stands in the fields at the foot of Sheshan Hill in Songjiang District.

It now ranks No.1 in Asia and No. 3 in the world in terms of overall performance, following the 110-meter-diameter Green Bank Telescope in the US and the 100-meter- diameter Effelsberg Telescope in Germany.

The Tianma can pick up eight different frequency bands, making it powerful enough to observe celestial bodies more than 10 billion light-years away.

“If you are on the Mars, you can pick up phone calls from the Earth,” said Shen Zhiqiang, head of the Shanghai Astronomical Observatory under the Chinese Academy of Sciences.

Tianma has been used in some crucial astronomical missions since it went into use in 2012. It has detected radio bursts from a magnetar, a type of neutron star, near the supermassive black hole in the galactic center. Currently, there are only four magnetars that have been detected by radio emissions.

The radio telescope’s first mission was to track and position the Chang’e-2 lunar probe in December 2012, as part of the China’s Very Long Baseline Interferometry system, which is used by scientists around the world to track moving objects in the universe. The system comprises a data center in Shanghai, and telescopes in Shanghai, Beijing, Kunming and Urumqi that form one giant “telescope” with a diameter of more than 3,000 kilometers.

Later, the Tianma joined the Chang’e-3 and 4 probes. This year, it will be contributing to the Chang’e-5 probe and will participate in China’s first Mars probe in 2020 and the Jupiter probe in 2025, according to Shen.

Construction on the Tianma site started in March 2010 and it was completed in October 2012.

“Usually, it takes six years to complete such a large-scale facility,” Shen said, noting the challenges surmounted by local engineers and scientists.

As a fully-steerable radio telescope, Tianma can move in every direction above the horizon, offering a 360-degree panorama of the universe with a “best pointing” accuracy of 3 arc seconds – equal to 1/7,200 degrees of every tick of a watch second hand. The telescope weighs about 2,700 tons and, according to Shen, is in operation about 7,000 hours every year.

The radio telescope was a “serendipity discovery,” said Shen.

It is widely believed that mankind started to point spyglasses toward the sky to explore the universe in the early 1600s. A turning point came in 1931, when American radio engineer Karl Jansky discovered radio waves emanating from the Milky Way in an experiment designed to study static electricity disturbances in radio telephone services. For the first time, human listened to the universe, Shen said.

Jansky’s discovery, publicized in 1931, inspired the invention of the radio telescope. Unlike optical telescopes that receive visible light, the radio telescope picks up radio emissions from the universe. Then, scientists process the data and draw sky maps.

Many celestial bodies, such as black holes in the center of the Milky Way and rapidly rotating stars, are only “visible” in the radio frequency portion of the electromagnetic spectrum.

“We could normally just see one of a trillion of photons from the center of the Milky Way,” Shen said. “By using a radio telescope, we can ‘see’ many of them.”

"Just last month, humans saw the first-ever close-up of a black hole, captured by the Event Horizon Telescope, a network of several radio telescopes scattered across the globe," he added. 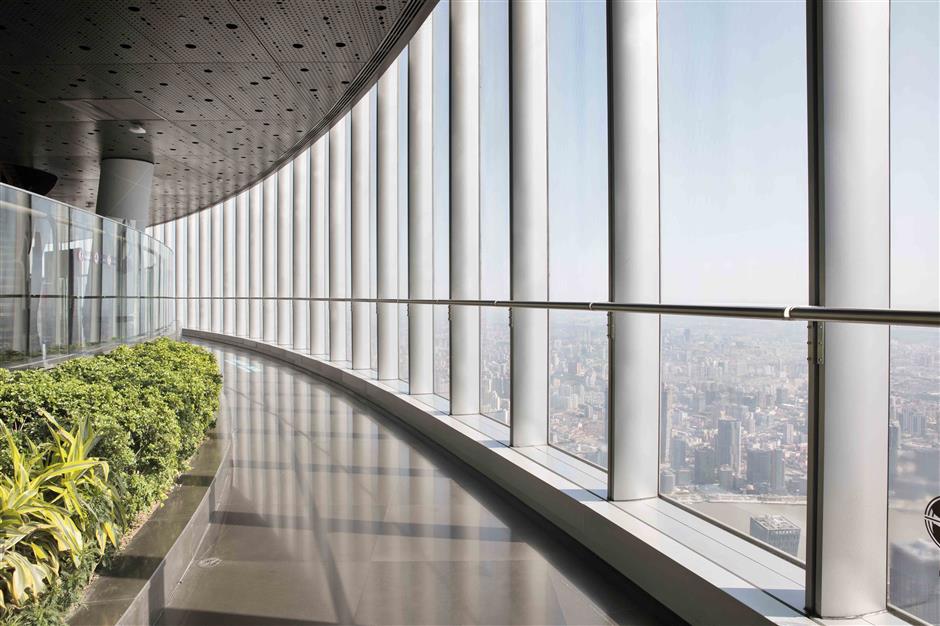 Shanghai Tower stands tallest among the three landmarks in Lujiazui.

Engineers from the Shanghai Construction Group won the other special prize.

They built Shanghai Tower as a model for future megacities, redefining what a super-tall building can achieve through environmentally friendly design and pioneering the concept of "vertical urbanism.”

Rising 632 meters above the Lujiazui financial hub, the “crystal spiral” Shanghai Tower is the tallest building in China and the second tallest in the world, surpassed only by the 828-meter Burj Khalifa in Dubai.

Weighing 850,000 tons, it is almost equal to 85 Eiffel Towers, yet it is built on soft ground. To avoid noise and pollution, engineers came up with the idea of first digging a massive hole and then putting through the steel pilings.

“When the construction started, there were many skyscrapers around, like Jin Mao Tower and Shanghai World Financial Center. Also, there is a Metro line running underground,” said Zhu Yimin, technical director of the Shanghai Construction Group.

“So we invented a new method to eliminate the effect to nearby structures,” he said. “It also helped save more than 60 percent of the costs. The method is now widely used in construction of skyscrapers.”

“Last year, we closed the damper for a while for testing, and we clearly felt shaking in the elevator,” said Zhu.

The tower incorporates more than 40 energy-saving features, reducing energy consumption by 20 percent since it opened.

Shanghai Tower was the first building over 400 meters in the world to be given a certificate in platinum-level leadership in energy and environmental design by the US Green Building Council. It also holds China's three-star green architecture title.

Its facade is wrapped in two layers of glass, formed by 20,357 flexible glass panels --each with a different size and shape. Glass saved on the use of steel and is conducive for natural cooling and ventilation.

A rain collection system atop the building can recycle 25 percent of rainwater and supply 245,000 cubic meters of water to the tower every year for gardens, toilets, and cooling and heating systems. It reduces the tower's water consumption by 43 percent.

There are 270 wind turbines spinning at the top of the tower, which can generate up to 1.19 million kilowatt-hours of green power a year, about 10 percent of what’s needed.

The tower has nine "vertical communities," each covering 12 to 15 floors.

Every community has "sky lobbies" that function as open-air squares of a “town,” where people can gather and dine. Tenants don't need to take elevators downstairs to have a cup of coffee or buy a sandwich.

“We don’t look at it as a building,” Gu said. “Instead, it is a vertical city that combines ecology, art and human-oriented designs.” 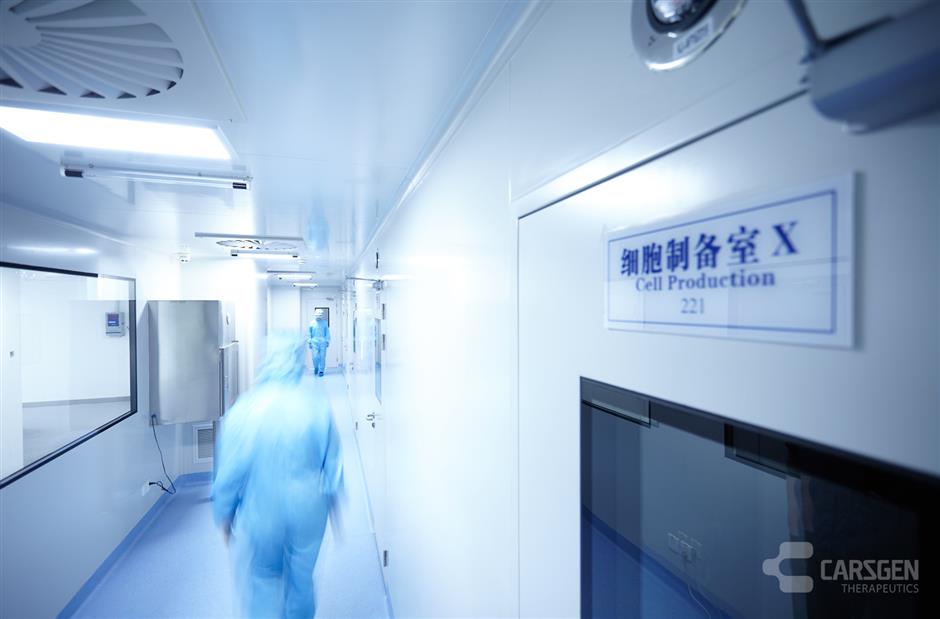 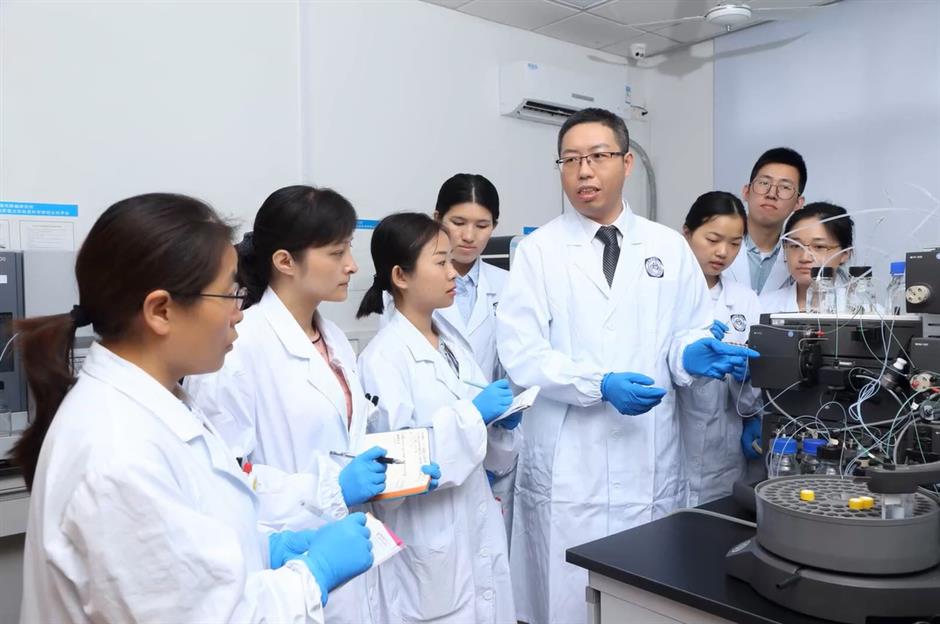 Li Zonghai and other researchers in lab

Ten people ranging in age from 37 to 46 were honored with outstanding achievement awards.

They include Pu Yanhua, 37, a woman who designed unmanned vessels used for polar science research, and electronic circuits expert Da Shengwei, 46, whose company plays a leading global role in the fields of deep learning and computer vision algorithms.

Another winner, Li Zonghai, has led the world in the study of using cutting-edge CAR-T therapy to treat cancer patients.

“I hope to make cancer curable,” he said.

In many cases, cancer patients are diagnosed too late to receive surgery, and they have to turn to other approaches.

However, chemotherapy kills everything and severely damages the immune system. Expensive targeted drugs don’t work well beyond extending life for several weeks to several months. Even emerging radiation therapies, such as heavy ion therapy, can work on just a very few cancers in limited areas.

“So, patients just end up in losing money and life,” said Li.

Immunotherapy, represented by CAR-T, became a hot topic after 2010.

Chimeric antigen receptor T-cell therapy uses genetically-engineered T cells -- a type of white blood cells that act as “special forces” in the body and are “equipped” with “GPS” -- artificial receptors that allow them to better recognize tumor cells.

Researchers used their own T cells from blood samples, genetically engineered them in the lab and then injected them back into the patients.

“The whole process took about 17 days,” said Li. “Two patients’ cancers have apparently been eradicated. They have lived cancer-free for nearly four years.”

Li’s company, with offices in China and the US, has been granted green light from the National Medical Products Administration to launch clinical trials in China on three drugs. They are first-in-human studies targeting liver cancer, gastric cancer, pancreatic cancer and glioblastoma.