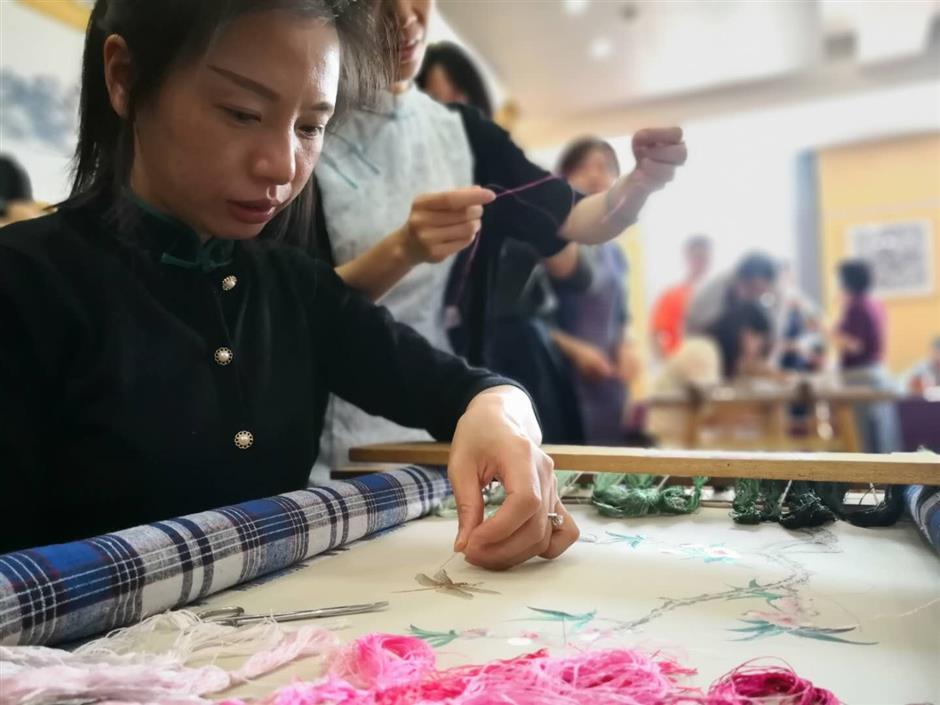 Gu Meizhen demonstrates Gu embroidery at the launch ceremony for a culture inheritance base at Shanghai Normal University.

A traditional culture inheritance base was launched at Shanghai Normal University on Thursday to train future teachers in the skill of Gu embroidery skills.

It is among the first batch of 55 bases approved last year by the Ministry of Education to be established on university campuses around the country to promote inheritance and innovative development of outstanding traditional Chinese culture. Shanghai Normal University is one of the six universities from Shanghai joining the program.

“We will hire successors of the craft as special professors and launch a course open to all students later this year to teach basic knowledge and skills of Gu embroidery,” said Zhang Hua, deputy director of the base. “We will also set up a students’ embroidery club, where the special professors will offer long-term hand-on-hand instructions on complicated embroidery skills to students who stand out from the public course. We will also visit local primary and secondary schools to help them carry out related education.”

Zhang said the university will use digital technologies to help promote the traditional craft and culture. With strength in film, TV and media education, it will produce a documentary on Gu embroidery while students are encouraged to work on their own videos or promotion plans.

Academic research will be conducted on Gu embroidery and related publications will be sponsored, said Zhang.

The base is also a cooperation between the university and the culture and tourism bureau in Songjiang District, where Gu embroidery, or guxiu, was established by the Gu family during the Ming Dynasty (1368-1644).

Gu embroidery is also known as "painting embroidery" or "painting by needle and thread" as the works mainly feature landscapes, animals and people in elaborate settings and are as vivid as paintings. Its secrets lie in the thin needles and threads used as well as the low-key and elegant colors.

A silk yarn is typically split into 16 threads for the embroidery. However, patterns such as eyebrows, hair, soft fur and fog-shrouded mountains in the distance require the yarn to be split even finer into 32 threads. The silk thread used in Gu embroidery can be thinner than a human hair, while stitch work has to be close and meticulously aligned. Its choice of elegant colors also makes it different from other bright-colored folk or imperial embroidery styles. 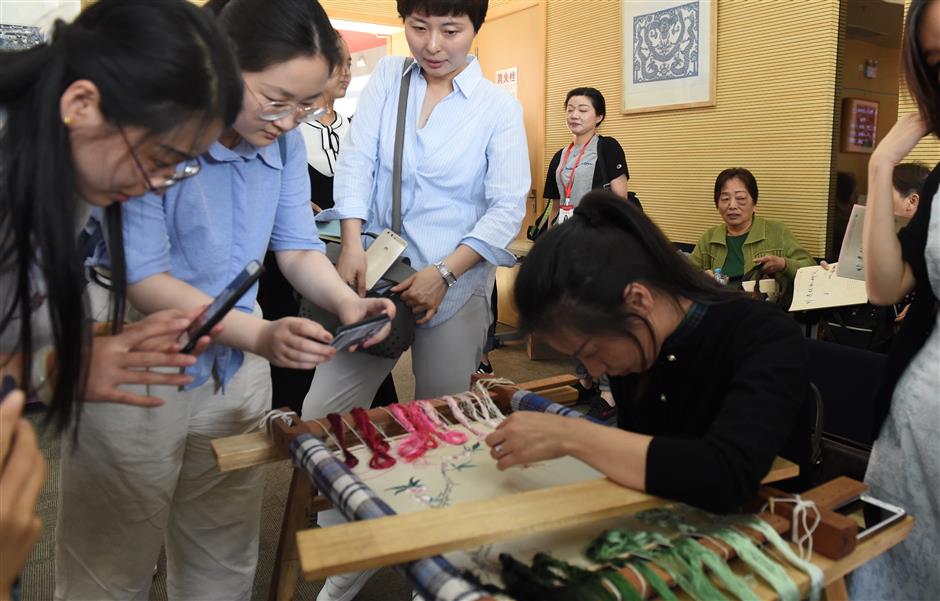 Some threads for Gu embroidery can be thinner than a human hair.

Mastering the craft takes about 10 years, and a piece of such embroidery takes about a year, which prevents easy commercialization. It was initially created exclusively for royalty.

The style was first created by a woman surnamed Miao, a concubine of the eldest son of local squire Gu Minshi. Han Ximeng, granddaughter-in-law of Gu, further combined the embroidery with painting, moving embroidery out of the decorative realm and promoting it as art. About 20 pieces of Han’s works are in museum collections, including four at the Shanghai History Museum.

During the Qing Dynasty (1644-1911), Gu Lanyu, the family’s great-grandmother, set up the first embroidery workshop and recruited apprentices, allowing local women to raise their family with their income from embroidery.

Gu embroidery was listed among the first batch of Chinese intangible cultural heritage in 2006, and Dai Mingjiao, who was born in 1922, was named the state-level successor of the craft in the same year.

Though Songjiang District has been promoting Gu embroidery, few people master it today because of what is required.

“You need to know painting so that you can embroider it well, and you also have to sit down for hours, so there are a lot of people coming to learn but few stick to it for long and become masters,” said Wu Yangping, director of Songjiang’s Intangible Cultural Heritages Protection and Promotion Center.

Currently, there are five city-level successors of Gu embroidery and 19 at district level. They train 20 to 30 students each year at a local school and teach local residents free at the district’s culture hall and the community culture center at the Yueyang Subdisctrict.

Jin Dongyun, director of the district’s culture and tourism bureau, said Gu embroidery is a craft full of Shanghai characteristics and a brilliant example of folk embroidery in Jiangnan, regions south of the Yangtze River. The cooperation with Shanghai Normal University is an attempt to explore new ways for cultural protection.

“It’s different from ordinary activities, such as mere exhibitions,” he said. “With classes and research, it will be more meaningful and influential.”

Ni Minjing, vice director of the Shanghai Education Commission, said: “The program is valuable. When a future teacher leans the skill, he or she will teach a large group of students. I hope we can not only benefit local students but those all over the country.” 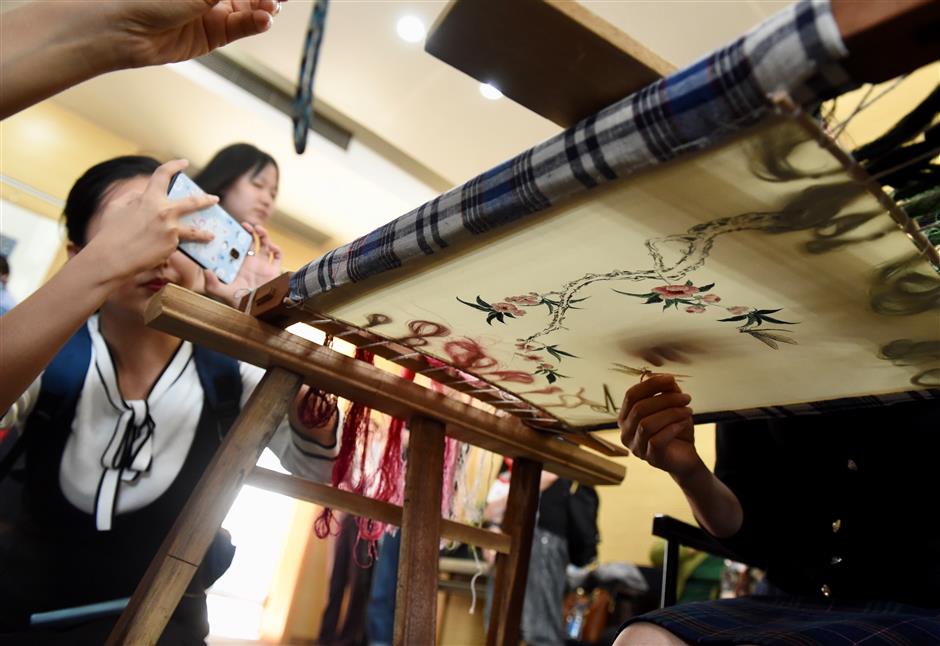 A visitor takes a photo of a piece of embroidery being worked on at Shanghai Normal University.