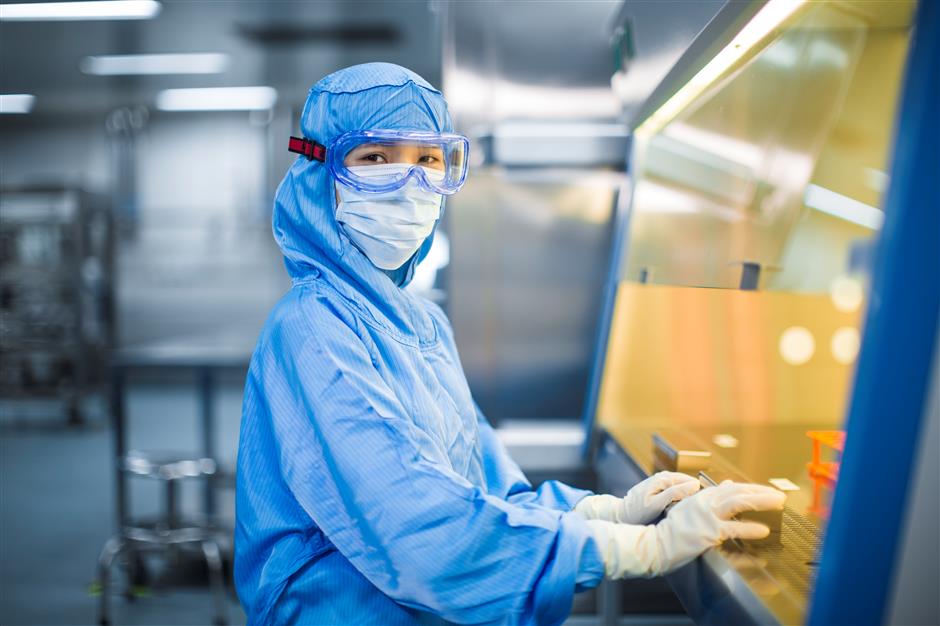 A female worker works at a biomed workshop of Henlius.

As Songjiang continues to optimize its biomedical industry, the district is becoming an industrial cluster of leading and backbone biomedical enterprises, according to an official with the Songjiang Science and Technology Commission.

Songjiang is the location of 82 key biomedical companies, of which 10 have an annual output value surpassing 100 million yuan (US$14.9 million).

The biomedical industry in Jiuting Town is also developing rapidly. About 1,200 mu of land in the town’s Jiuke Oasis Park will be allocated to develop biomedicine, biomedical engineering, smart health and bio-service industries.

While developing its biomedical industry, the district has always aimed to be strongly connected with global science and technology frontiers.

Yexie Town of Songjiang District signed an agreement this year with the China Council for the Promotion of Nationalities Trade about developing itself into a characteristic folk medicine town.

The biomedical industry in Songjiang now covers the majority of industrial chains such as biomedicine manufacture, medical service and medical engineering, with each field led by its backbone enterprises.

“With its solid foundation, Songjiang is very promising to become a leading district in Shanghai’s biomedical industrial development,” said an expert at the biomedical industry promotion center of Shanghai Science and Technology Commission.

The district is continuing to negotiate with key medical companies in order to introduce high-tech projects.

HYRZ Bio Tech, a company involved in immunocell therapy development, has also expressed its wish to built a research and production center in Songjiang.

A plan issued by the Shanghai government last year rules that starting from 2018 medical companies that obtain new drug certificates and plan to manufacture and sell new drugs in Shanghai would be granted a maximum subsidy (not surpassing 10 million yuan) equal to 10 percent of its first-stage research budget.

The district government will also make plans to support the development of backbone biomedical companies, improve the industrial environment and continue to introduce large or high-end biomed projects at home and abroad to Songjiang.