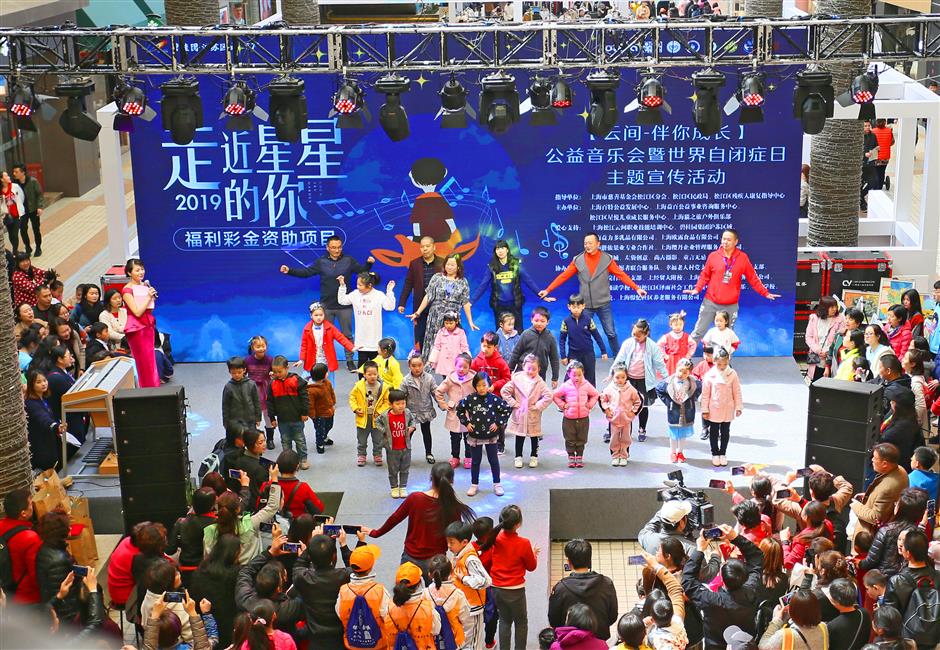 An Autism Awareness Day campaign was held at Kaiyuan Mediterranean shopping mall in Songjiang District on a Sunday ahead of World Autism Awareness Day on April 2. More than 1,000 people took part and tens of thousands of blue ribbons, symbols of help and gratitude, were distributed by about 500 volunteers to passers-by who later hung them along streets in the district.

The campaign included activities such as concerts, auctions, charity sales, “newsboy” paper selling and hiking. All donations collected during the event will be used for the benefit of autistic children.

“China has about 10 million autistic patients, among which more than 2 million are child patients under 14 years old. As the social environment gets more complicated, the incidence of the disease also rises,” said Yang Liming, founder of the Xingyue Child Development Service Center.

Songjiang has about 300 diagnosed child autistic patients but the actual number is estimated to be higher as some children haven’t yet been diagnosed while others may have been misdiagnosed as having intellectual impairments.

Those young volunteers and their families also joined a hiking activity in commercial areas of Songjiang, inviting passers-by to tie blue ribbons along the streets.

Paintings by autistic children were auctioned during the campaign and about 50,000 yuan (US$7,424) was raised among five companies to help them.