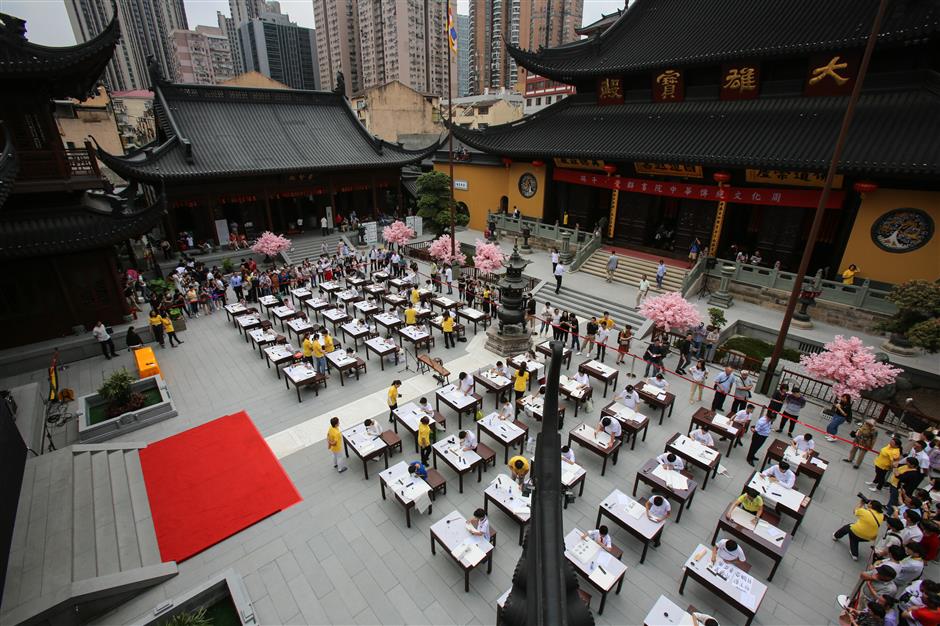 A calligraphy competition among local children is held at the Jade Buddha Temple on Friday as part of the celebration for the Dragon Boat Festival.

The city's Jade Buddha Temple launched a traditional cultural week on Friday to celebrate the Dragon Boat Festival among its large number of visitors from home and abroad.

The event on discovering the beauty of China aims to promote the nation's traditional cultures through various traditional performances and celebrations.

The temple, built in 1882 and renowned for its Jade Buddha, is one of the city’s most popular sites, attracting 1.2 million visitors a year, a third of them from abroad.

Dozens of visitors attended a traditional poem and tea party on Friday in front the grand hall of the temple. The historical Mahavira Hall, or the main pavilion, has been moved 30 meters north to make available a larger space in the main square.

Volunteers and children dressed in traditional costumes recited classic poems from the “Book of Odes” which was written some 2,500 years ago, while tea masters performed a tea ceremony on the sidelines. The performances attracted a lot of visitors, many from overseas.

"Though I cannot understand the language, I can still enjoy their beautiful performances and traditional costumes," said Retha Jones, a tourist from California in United States. 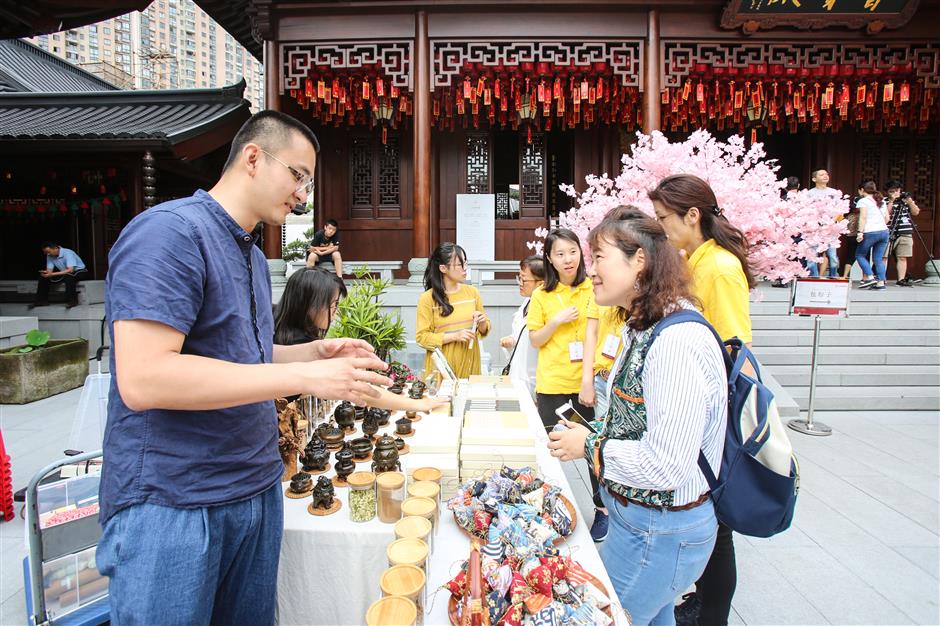 An artisan shows how to make a sachet to a visitor at the Jade Buddha Temple on Friday. 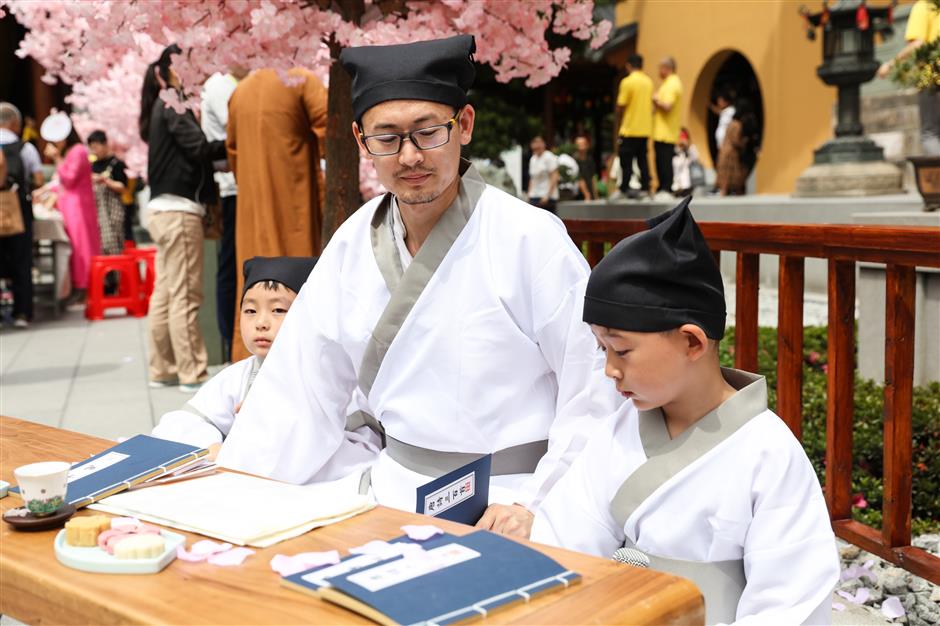 Children recite poems and showcase calligraphy at the Jade Buddha Temple on Friday.

Popa Laurentiu from Romania, who travelled to the city with his family, said he had been obsessed with the beautiful tones when the performers were reciting the poems.

"I've never seen such traditional Chinese event. It is a great idea to promote the ancient culture at the popular tourism attraction," he said.

The temple also invited senior artisans, chefs and calligraphers to make sachets, zongzi (glutinous rice dumpling) and traditional paintings to present to visitors. Visitors were also encouraged to make their own sachets and moon-shape fans.

Long lines of worshippers and visitors waited in front of these stalls to interact with the heritage masters and receive free festive treats from the temple that they believed can bring them good luck.

"The sachet can not only repel mosquito and other insects but is also auspicious festive gift," said a nearby resident surnamed Tang who waited for half an hour to get a sachet.

As part of the festive celebration, a calligraphy competition among local juveniles was also held at the temple on Friday. The event supported by the Shanghai Calligrapher Association aims to further promote traditional cultures among the young generation.

Other cultural events are planned for the weekend. Yoga masters from the Consulate General of India in Shanghai will perform and teach the physical and mental practice originated in ancient India. Masters of calligraphy, ink painting and tea ceremony will also give free lessons at the temple over the weekend. 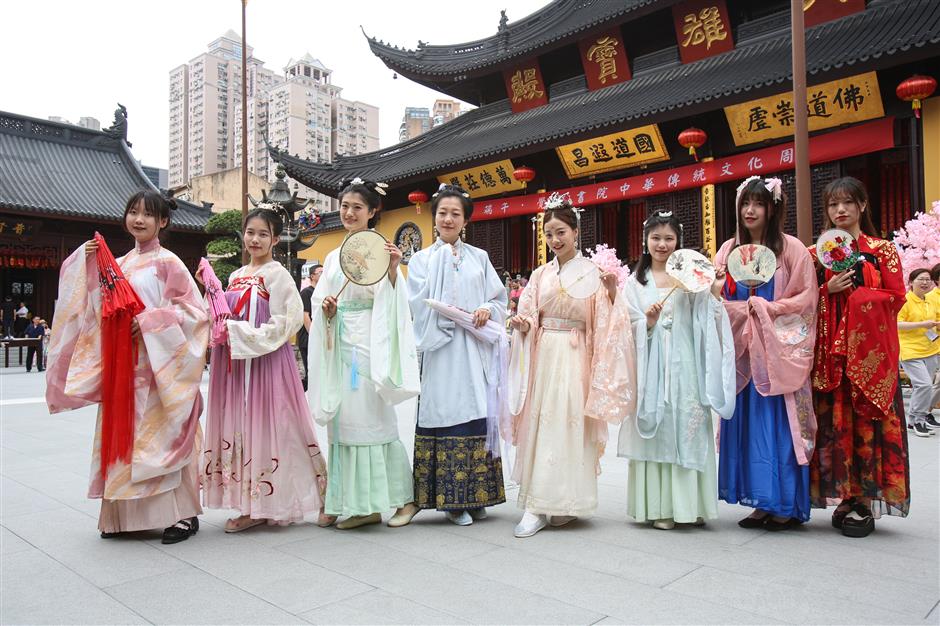 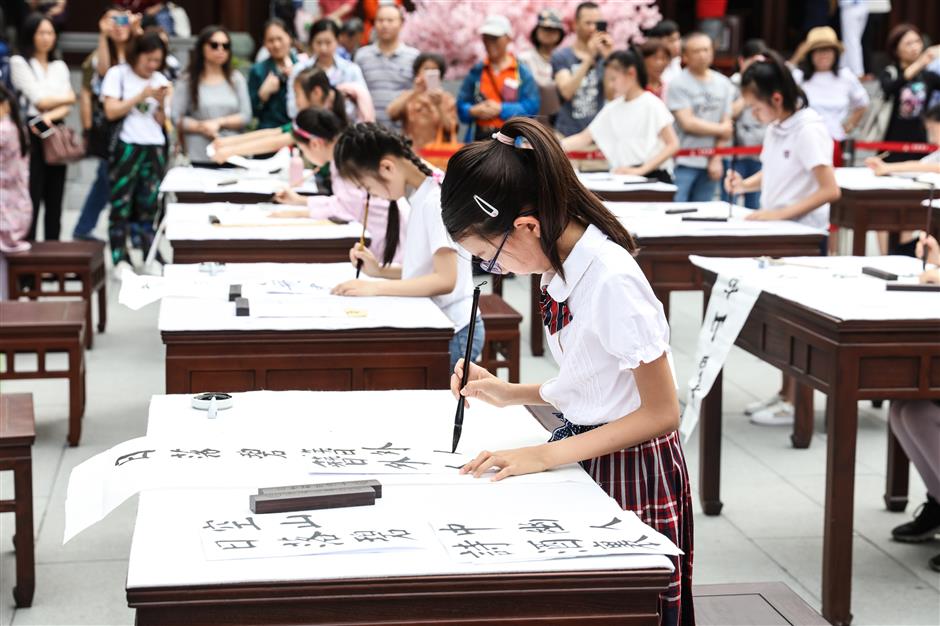 A calligraphy competition is part of the celebrations of the Dragon Boat Festival.