A pair of hands creates a pear of distinction

Every year between June and September, the fruit markets in Songjiang District draw throngs of people from local areas and beyond. The object of the shopping frenzy is the Cangqiao crystal pear, a light yellow fruit with a crispy crunch and a sweet, juicy flavor.

The pear, which was recommended to athletes at the 2008 Beijing Olympics and to visitors at the 2010 Shanghai Expo, was developed by a team led by Jin Fenglei.

Now deputy director of the Shanghai Pear Study Institute, Jin has been involved in developing improvements in pear cultivation since 2002. His efforts have won him a “Shanghai Standouts” award, which promotes workplace excellence in the city.

After graduating from Zhejiang Agriculture and Forestry University in 1996, Jin worked at several farms and companies before joining a new pear program that was starting in Cangqiao.

“At that time, I wanted to use the major specialties I learned in college to do something for my hometown, and that’s why I decided to join the program,” he says.

The Cangqiao area of Songjiang District has a history of pear cultivation dating back at least 700 years. For the last two centuries, fruit has reigned supreme among agricultural products in the area.

In the decades before Jin joined the program, the once-famous pears of Songjiang had gradually lost markets due to mediocre quality and low yield.

Various breeds of pears from other places, such as the Dangshan from Anhui Province and the Korla from the Xinjiang Uygur Autonomous Region, poured into local markets. Many fruit farmers in Songjiang simply gave up pear cultivation.

In 2000, local agriculture authorities designated Songjiang as the city’s main pear production zone because of its history. That was the impetus for a reboot of the pear industry.

In their early years, Jin and his team experimented with more than 270 introduced pear breeds. Some were successful, some were not. Summers meant endless tasting of pears by the team. Jin even took fruit home and asked family members to taste test them.

“The beginning was the hardest,” Jin says. “During those years, it was not uncommon for me to leave home for work at 5am and not return until after 8pm. I spent all day in the orchards. Every year, the only break I took were a few days for the Spring Festival. My family couldn’t understand what I expected to achieve by working so hard.”

The breed selection process lasted for about six years, until Jin and his team finally pared the contenders down to the best for pollinating new breeds in the city.

But that was just a small step forward. Every pear tree had to be assessed to see if it was producing qualified fruit. 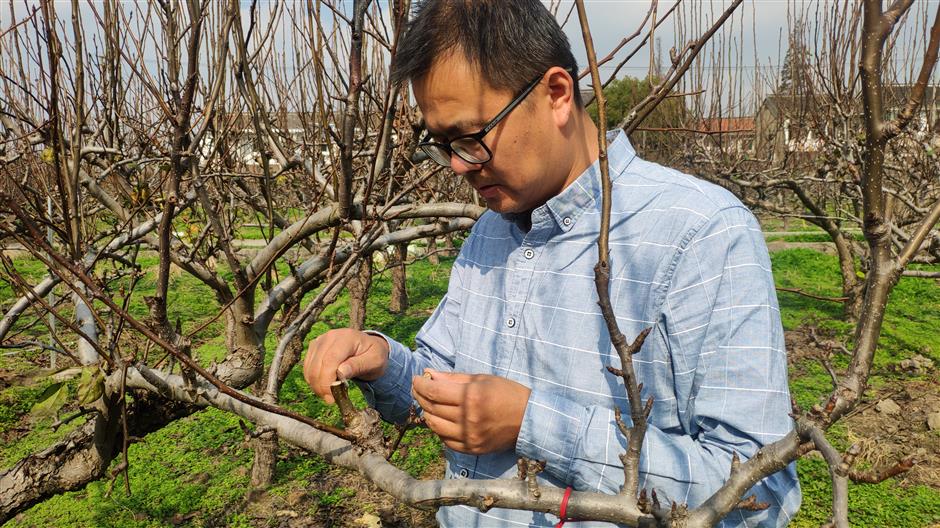 Jin Fenglei examines the branches of a pear tree before it begins to leaf in the spring.

Even the pruning of the trees could affect the results. On every tree, only 50 branches were retained for bearing fruits. Each branch had six buds, and each bud had six to eight flowers. Each flower could produce one pear.

“We pruned the trees to ensure that each and every fruit would have adequate nutrients,” Jin says. “In selecting the seeds of each breed, we measured the size of the trunk, the length of the branches and the general shape of the trees. When pruning, we had to carefully consider which branches to cut and which to keep.”

Jin’s study showed that the best pears grew on trees with healthy root structures, which in turn depend on high-quality soil.

Jin spent years trying to improve fertilization and control the use of pesticides. Ripening fruits were bagged to prevent marauding by birds and insects.

All the hard work eventually paid off. He and his team finally tasted the best pears they have ever produced in their experimental orchard. They were crispy, but not too hard. They were so moist that juice trickled out even when the fruit was being peeled. They were sweeter than watermelons but not so sickly sweet that they didn’t quench thirst. Iced pears? Yes, the pears tasted like cool smoothies and could be sucked through a straw.

“Gradually my family started to understand my devotion,” Jin says. “My pears started to grow on them as well.”

Cangqiao crystal pears have several breeds: the Fengshui variety produces more juice than others. The Zaoshengxinshui is as sweet as honey, while the Yuanhuang is the roundest and the biggest.

Because of the high cultivation cost, these pears are more expensive. They cost about 10 yuan (US$1.45) each, while common pears sell for 6-10 yuan for 500 grams.

Despite the price, consumers have no qualms about buying Cangqiao pears. Sometimes during the harvest season, a fruit-picking event at Jin’s experimental station becomes a local sightseeing sensation.

“The best feedback from consumers are comments like ‘after having one bite of a Cangqiao crystal pear, I don’t want to eat any other kind,’” says Jin. “That’s what makes me really feel that I have succeeded.”

Apart from cultivating pears, Jin is also mentoring younger cultivators. He says young people involved in the study of pears usually pursue one of two avenues — theoretical study, such as genetic research, or field application, like Jin’s work. Most seem to prefer the former, he said.

“Theoretical study may seem classier, but field application is also very important,” he says. “I’m about to reach my 50s, and I hope to find more young talent willing to devote their careers to this work.”

People who win the “Shanghai Standouts” awards are said to embody the “spirit of craftsmanship.” In Jin’s opinion, such spirit is all about perseverance.

“It is true that this career is no easy path,” he says. “It is easy to do it for one day, but if you want to achieve anything, you have to stick to it for years and hold on to the end.”